I. Consider the following statements.

Question 3.
In the diagram of lenticel identify the parts marked as A, B, C, D 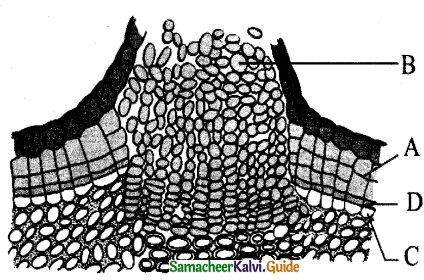 Question 4.
The common bottle cork is a product of
a) Dermatogen
b) Phellogen
c) Xylem
d) Vascular cambium
Answer:
b) Phellogen

Question 5.
What is the fate of primary xylem in a dicot root showing extensive secondary growth?
a) It is retained in the center of the axis
b) It gets crushed
c) May or may not get crushed
d) It gets surrounded by primary phloem
Answer:
b) It gets crushed

Question 6.
In a forest, if the bark of a tree is damaged by the horn of a deer, How will the plant overcome the damage?
Answer:
When the bark is damaged, the phellogen forms a complete cylinder around the stem and it gives rise to ring barks.

Question 8.
Continuous state of dividing tissue is called meristem. In connection to this, what is the role is lateral meristem?
Answer:
The secondary growth in dicots and gymnosperms is brought about by two lateral meristems.

Origin and Formation of Vascular Cambium:

A. Organization of Vascular cambium:

Ray Initials:
These are horizontally elongated cells. They give rise to the ray cells and form the elements of the radial system of secondary xylem and pholem.

Question 9.
A timer merchant bought 2 logs of wood from, a forest & named them A & B, The log A was 50 year old & B was 20 years old. Which log of wood will last longer for the merchant? Why?
Answer:

Question 10.
A transverse section of the trunk of a tree shows concentric rings which are known as growth rings. How are these rings formed? What are the significance of these rings?
Answer:
Growth (or) Annual Rings:
1. In the spring season cambium is very active and produces large number of xylary elements called Earlywood or Springwood. In the Winter season – cambium is less active and form few xylary elements – Latewood or Autumn Wood.

2. The springwood is lighter in color and has a lower density whereas the autumn wood is darker and has a higher density. The annual ring denotes the combination of earlywood and latewood and the ring becomes evident to our eye due to the high density of latewood. Sometimes annual rings are called growth rings

I. Choose The Correct Answer.

Question 2.
The Gymnosperm in which vessel is present
a) Pinus
b) Cýcas
c) Ginkgo
d) Gnetum
Answer:
d. Gnetum

Question 5.
For a critical study of secondary growth in plants which one of the following pairs is suitable?
a) Sugarcane and sunflower
b) Teak and pine
c) Bamboo and Fem
d) Wheat and Fem
Answer:
b. Teak and pine

Question 13.
You are given a fairly old piece of dicot stem and a dicot root, which of the following anatomical structures will you distinguish between the two?
a) Secondary xylem
b) Secondary phloem
c) Protoxylem
d) Cortical cells
Answer:
c. Protoxylem

Question 15.
Which one of the following is dead and works efficiently?
a) Sieve tube
b) Companian cells
c) Vessels
d) Both (b) and (c)
Answer:
c. Vessels

Question 18.
Which wood is also known as Non-porous
a) Softwood
b) Heartwood
c) Hardwood
d) Sapwood
Answer:
a. Softwood

Question 24.
When we peel the skin of a potato tuber we remove
a) Periderm
b) Epidermis
c) Cuticle
d) Sapwood
Answer:
a) Periderm

Question 26.
The waxy substances associated with cell walls of cork cells are impervious to water because of the presence of ………………. which gets deposited on the cork cells
a) Cutin
b) Suberin
c) Eignin
d) Hemicellulose
Answer:
b) Suberin

III Identify True Or False And From The Given Option Choose The Right Answer:

Question 4.
Column I and Column II – Match them correctly and Find out the right option.
Answer:

Question 2.
ASSERTION: -A In angiosperms, the conduction of water is more efficient because their xylem has vessels
REASON – R: Conduction of water by vessel element is an active process in which energy is supplied by xylem parenchyma with a large number of Mitochondria
Answer:
a) Both A and R – are true and ‘R’ is the correct explanation of A

Question 3.
ASSERTION: -A. All the endodermal cells of the root do not contain Casparian thickenings on their radial and transverse walls.
REASON-R: Passage cells are found in the root endodermis, which conducts water in to the xylem
Answer:
a) Both A and R are true and ‘R’ is the correct explanation of A

Question 4.
ASSERTION:-A Cambium is a lateral meristem and causes growth in width
REASON-R Cambium is made up of fusiform and ray initials in stem
Answer:
b) Both A and R are true, but R is not the correct explanation of A

Question 5.
ASSERTION: – A The lenticel is meant for gaseous exchange.
REASON-R Lenticel checks excessive evaporation of water.
Answer:
b) Both A and R are true but R is not the correct explanation of A

Question 6.
ASSERTION:-A Heartwood is more durable
REASON – R Heartwood contains organic compounds like tannins, resins, oil, gums, aromatic substances and essential oils help to resist microbial and termites attack.
Answer:
a) Both A and R are true and R is the correct explanation of A

Question 4.
Fill in the blanks

Question 6.
Why does porous wood be harder than non-porous wood?
Answer:

Question 7.
What is the source of turpentine? and What is its use?
Answer:

Question 10.
What is the use of Canada balsam?
Answer:
From the resin ducts, the Abies balsamea plant produces an organic gum-like substance, used as a permanent mounting medium for microscopic slide preparation.
Eg. A slide of 60 years old holotype specimen of a flatworm is permanently mounted in Canada balsam.

Question 1.
Distinguish between primary and secondary growth.
Answer:
1. Primary growth: The plant organs originating from the apical meristems pass through a period of expansion in length and width. The roots and stems grow in length with the help of apical meristems. This is tailed primary growth or longitudinal growth.

2. Secondary growth: The gymnosperms and most angiosperms, including some monocots, show an increase in the thickness of stems and roots by means of secondary growth or latitudinal growth.

Question 3.
Explain briefly about false annual rings.
Answer:
Additional growth rings are developed within a year due to adverse natural calamities like drought, frost, defoliation, flood, mechanical injury and biotic factors during the middle of a growing season, which results in the formation of more than one annual ring. Such rings are called pseudo – or false – annual rings.

Question 8.
Explain the term lenticel.
Answer:
Lenticel is raised opening or pore on the epidermis or bark of stems and roots. It is formed during secondary growth in stems. When phellogen is more active in the region of lenticels, a mass of loosely arranged thin-walled parenchyma cells is formed. It is called complementary tissue or filling tissue. Lenticel is helpful in the exchange of gases and transpiration called lenticular transpiration.

Question 9.
Mention the benefits of bark in a tree.
Answer:
Bark protects the plant from parasitic fungi and insects, prevents water loss by evaporation, and guards against variations of external temperature. It is insect repellent, decay proof, fireproof, and is used in obtaining drugs or spices. The phloem cells of the bark are involved in the conduction of food while secondary cortical cells involved in storage.

Question 10.
Annual rings are not clear and distinct in desert trees and seashore plants – Justify.
Answer:

Question 11.
A plant dies if the sapwood is damaged, but not with that of Heartwood – Give factual justification.
Answer:

Question 12.
What is Dendrochronology? Add a note on the significance of studying the growth rings.
Answer:

Question 13.
If  ‘A’ is vascular cambium, then label other parts with reference to cambial activity. 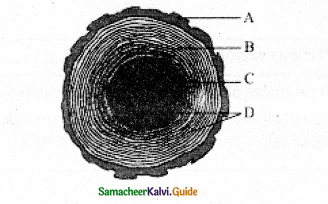 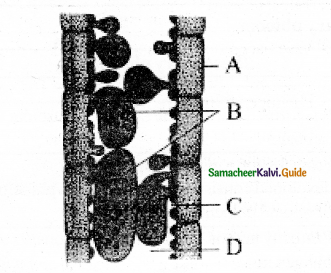 Question 16.
In the given diagram, the parts labelled are A, B, C, D identify the part correctly with respect to its function. 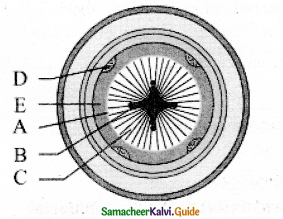 Question 2.
Distinguish the significance of Cork and Bark
Answer:
Cork:

Question 5.
Give an account of Any 5 Commercial barks their, properties and uses
Answer: