Question 5.
Which of the following reaction is not involved in Krebs cycle.
(a) Shifting of phosphate from 3C to 2C
(b) Splitting of Fructose 1,6 bisphosphate of into two molecules 3C compounds.
(c) Dephosphorylation from the substrates
(d) All of these
Answer:
(d) All of these

Question 7.
The respiratory quotient is zero in succulent plants. Why?
Answer:
In some succulent plants like Opuntia, Bryophyllum carbohydrates are partially oxidised to organic acid, particularly malic acid without the corresponding release of CO2 but O2 is consumed hence the RQ value will be zero.

3. Complex-II (succinic dehydrogenase) It contains FAD flavoprotein is associated with non-heme iron Sulphur (Fe-S) protein. This complex receives electrons and protons from succinate in Kerbs cycle and is converted into fumarate and passes to ubiquinone.
Succinate + UQ Fumaraic LQH2

5. Complex IV (Cytochrome c oxidase) Complex IV is the terminal oxidase and brings about the reduction of 1/2 O2 to H2O. TWO protons are needed to form a molecule of H2O (terminal oxidation).

Question 9.
What is the name of alternate way to glucose breakdown? Explain the process in involved in it?
Answer:

Question 10.
How will you calculate net products of one sucrose molecule upon complete oxidation during aerobic respiration as per recent view?
Answer:
When the cost of transport of ATPs from the matrix into the cytosol is considered, the number will be 2.5 ATPs for each NADH + H+ and 1.5 ATPs for each FADH2 oxidized during the electron transport system. Therefore, in plant cells net yield of 30 ATP molecules for complete aerobic oxidation of one molecule of glucose. But in those animal cells (showing malate shuttle mechanism) net yield will be 32 ATP molecules. Since the sucrose molecule gives, two molecules of glucose and net ATP in plant cell will be 30 × 2 = 60.
In an animal cell, it will be 32 × 2 = 64.

I. Choose The Correct Answer

Question 8.
Food materials like carbohydrate, fat and proteins are completely oxidised into CO2, H2O and energy in ………………. respiration
a) anaerobic
b) aerobic
c) Bacterial respiration
d) Facultative
Answer:
b) aerobic

Question 18.
The complex system responsible for passing electrons and protons from mitochondria to ubiquinone is ………………..
a) Complex I
b) Complex II
c) Complex III
d) Complex IV
Answer:
a) Complex I

Question 22.
How many ATP molecules are produced when a molecule of glucose undergo fermentation?
a) TwoATPs
b) Six ATPs
c) Eight ATPs
d) one ATP
Answer:
a) Two ATPs

Question 24.
Enzymatic reaction for partial oxidation of glucose in the absence of oxygen is present in
a) Some Bacteria
b) Yeast fungus
c) A and B
d) Bryophytes
Answer:
c) A and B

Question 26.
Match the Column I with the enzyme responsible for its production in column II
Answer:

Question 27.
Which one is wrongly matched

Question 1.
Define respiration?
Answer:
Respiration is a biological process in which oxidation of various food substances like carbohydrates, proteins, and fats take place and as a result of this, energy is produced where O2 is taken in and CO2 is liberated.

Question 3.
What do you understand by compensation of point?
Answer:
The point at which CO2 released in respiration is exactly compensated by CO2 fixed in photosynthesis that means no net gaseous exchange takes place, it is called the compensation point.

Question 4.
What is Anaerobic respiration? What are its steps?
Answer:

Question 5.
What is anaerobic respiration?
Answer:
In the absence of molecular oxygen-glucose is incompletely degraded into either ethyl alcohol or lactic acid. It includes two steps:

Question 6.
What is Link reaction?
Answer:
In aerobic respiration, Conversion of Pyruvic acid into acetyl coenzyme – A in the mitochondrial matrix with two molecules of NADH + H+ and 2 CO2. This is called Link reaction (or) transition reaction.

Question 14.
Who was awarded the Nobel Prize for coupling of oxidation and phosphorylation in mitochondria?
Answer:
Peter Mitchell, a British Biochemist received Nobel Prize for chemistry in 1978. 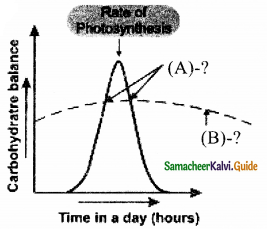 Answer:
A. Compensation point
B. Rate of Respiration

Question 21.
Write the missing A and B. 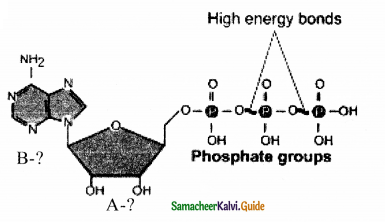 Answer:
A. Ribose
B. Adenine

Question 1.
In the biosphere how do plants and animals are complementary systems, which are integrated to sustain life?
Answer:
In plants, oxygen enters through the stomata and it is transported to cells, where oxygen is utilized for energy production. Plants require carbon dioxide to survive, to produce carbohydrates, and to release oxygen through photosynthesis, these oxygen molecules are inhaled by humans through the nose, which reaches the lungs where oxygen is transported through the blood and it reaches cells. Cellular respiration takes place inside or the cell for obtaining energy.

Question 2.
What is Respiration?
Answer:

Question 5.
What is a redox reaction?
Answer:
NAD+ + 2e– + 2H+ → NADH + H+
FAD + 2e– + 2H+ → FADH2
When NAD+ (Nicotinamide Adenine Dinucleotide – oxidized form) and FAD (Flavin Adenine Dinucleotide) pick up electrons and one or two hydrogen ions (protons), they get reduced to NADH + H+ and FADH2 respectively. When they drop electrons and hydrogen off they go back to their original form. The reaction in which NAD+ and FAD gain (reduction) or lose (oxidation) electrons are called redox reactions (Oxidation-reduction reactions). These reactions are important in cellular respiration.

Question 6.
Define ETS (or) Electron transport chain (or) What is the importance of ETS and oxidative Phosphorylation in respiration.
Answer:

Question 8.
Write the differences between ubiquinone and Cytochrome C.
Answer:

Question 10.
RQ will be less than one in Red colour Parts Present in Plants? Why?
Answer:

Question 13.
What is the Pentose phosphate pathway?
Answer:

Question 14.
How alcoholic beverages like beer and wine is made?
Answer:

Question 1.
Ambulate the differences between aerobic and anaerobic respiration.
Answer: 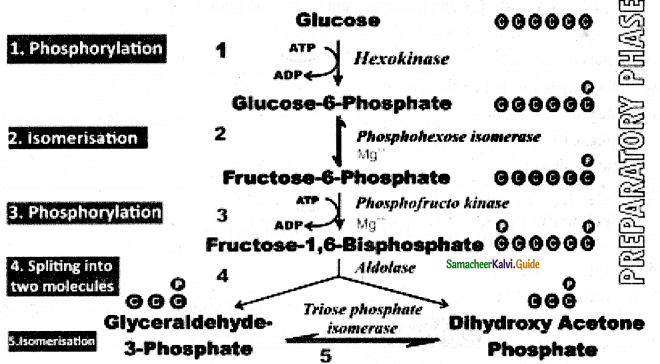 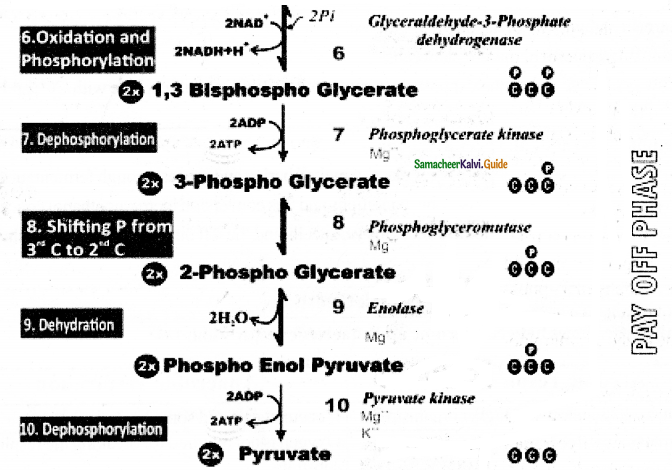 Energy Budge of pay off phase:

During the preparatory phase, two ATP molecules are àonsumed. 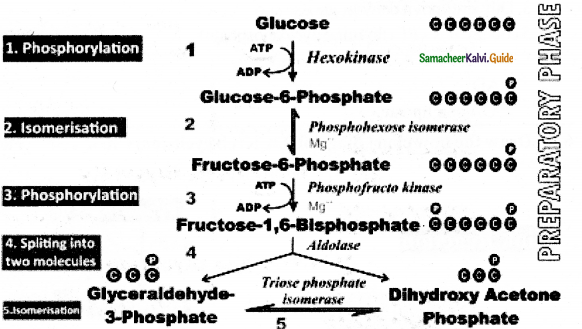 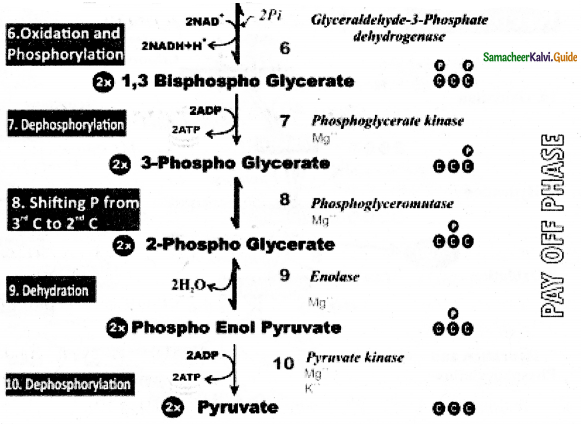 It is also called transition reaction (or) Link reaction. 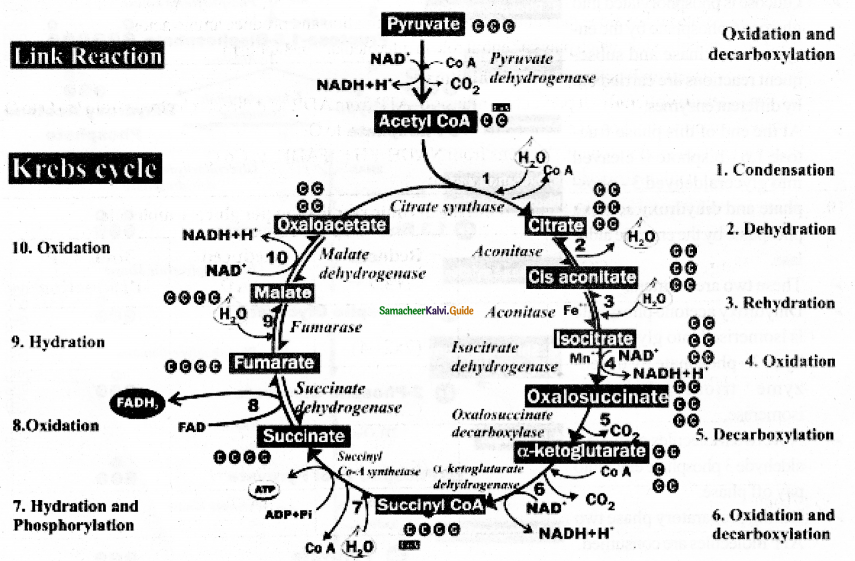 Question 11.
Experiment to demonstrate the production of CO2 in aerobic respiration.
Answer:

Question 14.
Tabulate the comparison between glycolysis and fermentation.
Answer: 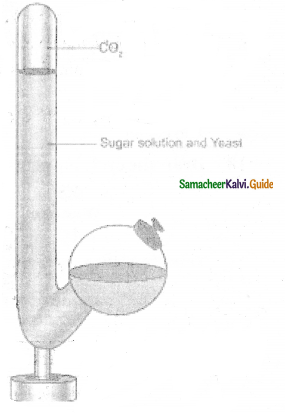 Question 16.
Write the Factors (Internal and External) which affect the process of respiration.
Answer:
External Factors: 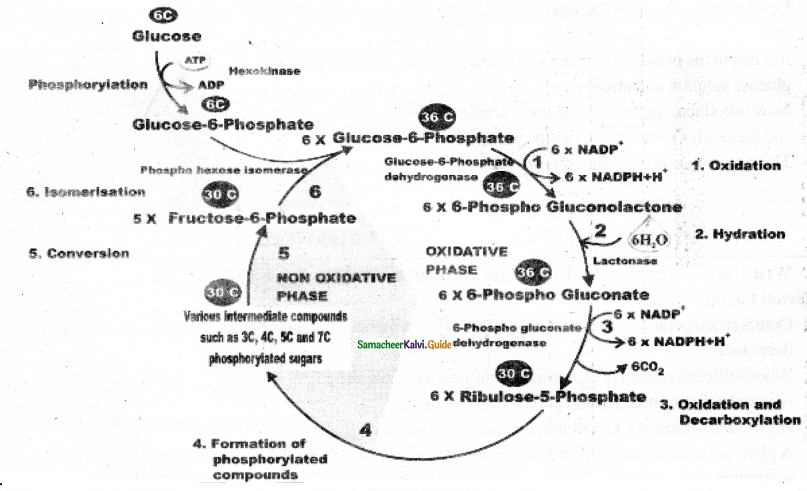 Question 19.
Write about the Significance of Pentose Phosphate pathway.
Answer: