Question 1.
A particle of mass m is moving with speed u in a direction which makes 60° with respect to x-axis. It undergoes elastic collision with the wall. What is the change in momentum in x and y direction? 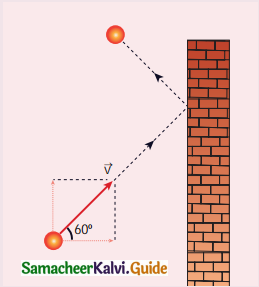 Question 4.
Two identically sized rooms A and B are connected by an open door. If the room A is air conditioned such that its temperature is 4° lesser than room B, which room has more air in it?
(a) Room A
(b) Room B .
(c) Both room has same air
(d) Cannot be determined
Answer:
(a) Room A

Hint:
As temperature of room A is less than that of room B evidently, Room A has more air in it.

Question 6.
If the internal energy of an ideal gas U and volume V are doubled then the pressure:
(a) doubles
(b) remains same
(c) halves
(d) quadruples
Answer:
(b) remains same 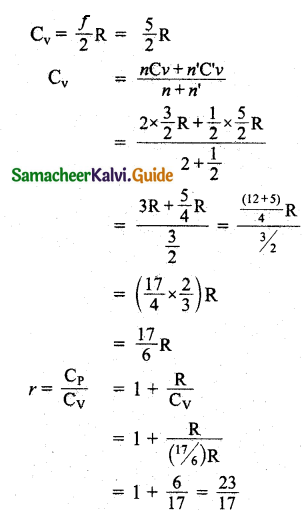 Hint:
Mean free path is independent of temperature of pressure.

Question 10.
Which of the following shows the correct relationship between the pressure and density of an ideal gas at constant temperature? 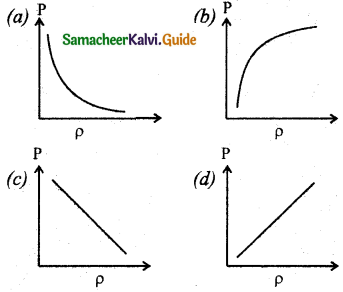 Question 15.
The following graph represents the pressure versus number density for ideal gas at two different temperatures T1 and T2. The graph implies: 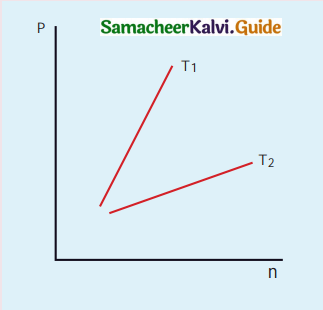 Question 1.
What is the microscopic origin of pressure? kinetic energy and pressure?
Answer:
The microscopic origin of pressure was proposed by considering a thermodynamic system as a collection of molecules. By the kinetic theory of gases, the pressure is linked to the velocity of molecules (v) and number density (\(\frac {N}{ V }\))
p = \(\frac { 1 }{ 3 }\)\(\frac { N }{ V }\)mv²
Where v – velocity of molecular
\(\frac { N }{ V }\) – number density

Question 2.
What is the microscopic origin of T is uniformly distributed to all degrees of temperature?
Answer:
The average K.E per molecule \(\overline{\mathrm{KE}}=\epsilon=\frac{3}{2} k \mathrm{T}\)
The equation implies that the temperature of a gas is a measure of the average translational K.E. per molecule of the gas.

Question 3.
Why moon has no atmosphere?
Answer:
The escape speed of gases on the surface of Moon is much less than the root mean square speeds of gases due to low gravity. Hence all molecules of the gases escape from the surface of the Moon easily.

Question 6.
Define the term degrees of freedom.
Answer:
The minimum number of independent coordinates needed to specify the position and configuration of a thermo-dynamical system in space is called the degree of freedom of the system.

Question 9.
Deduce Charle’s law based on kinetic theory.
Answer:
PV = \(\frac {2}{ 3 }\)U
For a fixed pressure, the volume of the gas is proportional to internal energy of the gas.
(or)
Average kinetic energy is directly proportional to absolute temperature. It is implied that,
V ∝ T
(or) \(\frac {V}{ T }\) = constant.

Question 13.
What is the reason for the Brownian motion?
Answer:
According to kinetic theory, any particle suspended in a liquid or gas is continuously bombarded from all directions so that the mean free path is almost negligible. This leads to the motion of the particles in a random and zig-zag manner.

Question 1.
Write down the postulates of the kinetic theory of gases.
Answer:

Question 2.
Derive the expression of pressure exerted by the gas on the walls of the container.
Answer:
Let us consider a monoatomic gas of N molecules each having a mass m inside a cubical container of side l. 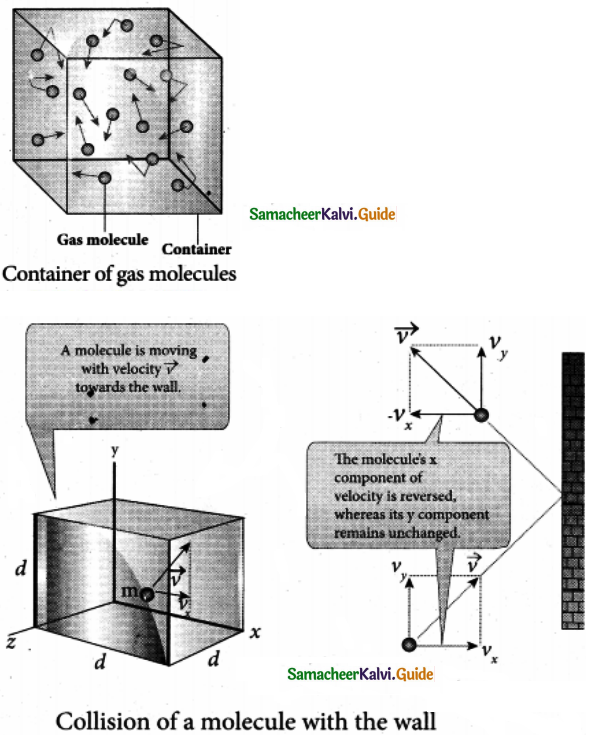 The molecules collide with each other and also with the walls of the container. As the collisions are elastic in nature, there is no loss of energy, but a change in momentum occurs.

During each collision, the molecules impart certain momentum, to the wall. Because momentum, is transferred by molecules, the walls experience a continuous force. The force experienced per unit area of the walls of the container determines the pressure exerted by the gas.

Let us consider a molecule of mass m moving with a velocity v having components (vx, vy, vz) hits the right side wall. Since we have assumed that the collision is elastic, the particle rebounds with same speed and its x-component is reversed. The components of velocity of the molecule after collision are (-Vx, Vy, Vz).

According to law of conservation of linear momentum, the change in momentum of the wall = 2 mvx
The molecules within the distance of vx∆t from the right side wall and moving towards the right will hit the wall in the time interval ∆t. 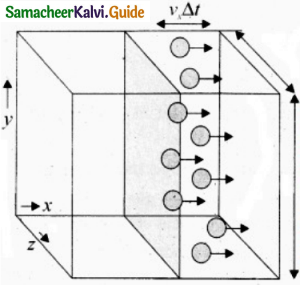 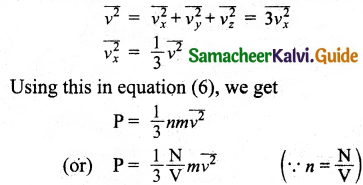 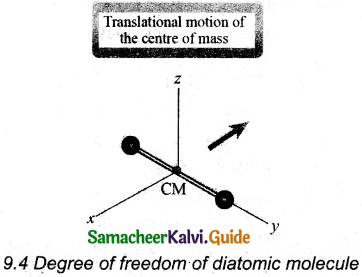 In addition, the diatomic molecule can be rotated about three mutually perpendicular axes. 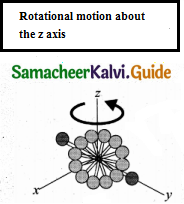 (ii) At high temperature: At a very high temperature such as 5000 K, the diatomic molecules possess additional two degrees of freedom due to vibrational motion [one due to kinetic energy of vibration and the other is due to potential energy].

So totally there are seven degree of freedom.
f = 7
Example: Hydrogen, Nitrogen, Oxygen.

So a linear triatomic molecule has seven degrees of freedom.
Example: Carbon dioxide. 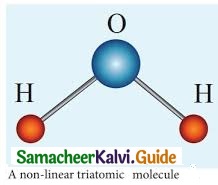 (iii) The ratio of specific heats,

(ii) For one mole specific heat at constant volume 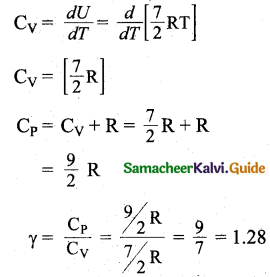 Question 6.
Explain in detail the Maxwell Boltzmann distribution function.
Answer:
(i) All molecules in any gas move with different velocities in random directions.

(ii) Each molecule collides with every other molecule and their speed is exchanged.

(iv) In general our interest is to find how many gas molecules have the range of speed from v to v + dv. 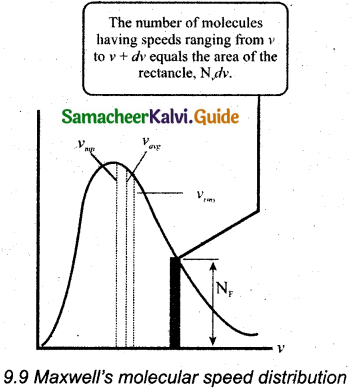 (vi) For a given temperature the number of molecules having lower speed increases parabolically but decreases exponentially after reaching most probable speed. The rms speed, average speed, and most probable speed are indicated in the Figure.

(vii) It is found that the rms speed is greatest among the three.

(viii) The area under the graph will give the total number of gas molecules in the system.

(ix) From the speed distribution graph for two different temperatures, it is found that, as temperature increases, the peak of the curve is shifted to the right.

(x) It is implied that the average speed of each molecule will increase. But the area under each graph is the same. Since it represents the total number of gas molecules.

Question 7.
Derive the expression for mean free path of the gas.
Answer:
Let us consider a system of molecules each with diameter d. Let n be the number of molecules per unit volume. It is assumed that only one molecule is in motion and all others are at rest as shown in the figure.

It is assumed that only one molecule is moving at a time and other molecules are at rest. But in actual practice all the molecules are in random motion. Hence the average relative speed of one molecule with respect to other molecules has to be taken into account. After some detailed calculations the correct expression for mean free path,
λ = \(\frac{1}{\sqrt{2} n \pi d^{2}}\)
It is implied from the equation that the mean free path is inversely proportional to number density. When the number density increases the molecular collisions increases. Hence it decreases the distance travelled by the molecule before collisions. 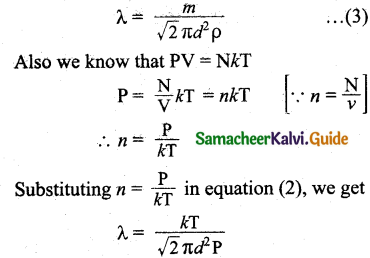 According to kinetic theory, any particle suspended in a liquid or gas is continuously bombarded from all directions in such a way that the mean free path is almost negligible. This leads to the motion of the particles in a random and zig-zag manner. 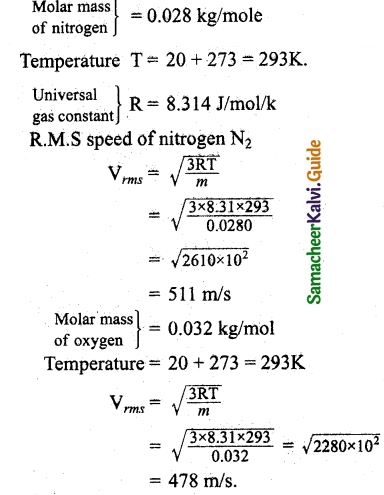 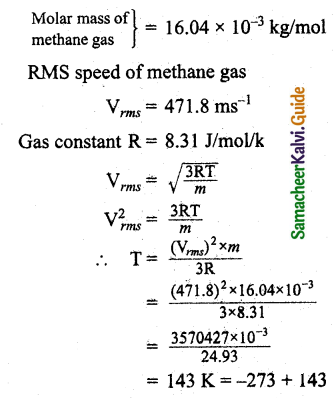 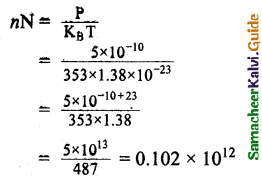 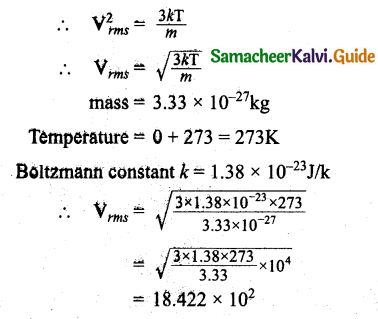 Vrms = 1.842 x 10³ ms-1
The value of ve is less than the velocity of gas present on the moon. Hence moon cannot have an atmosphere. 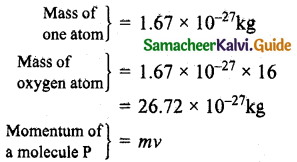 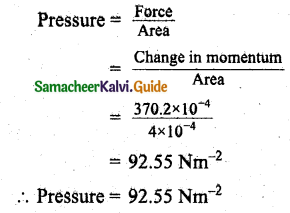 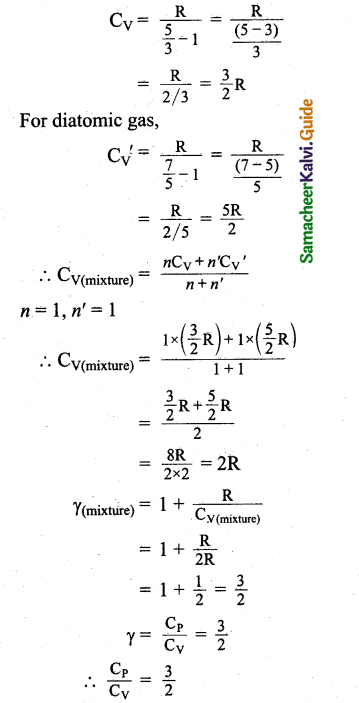 In terms of number of molecules and radius the mean free path at S.T.P can be written as, 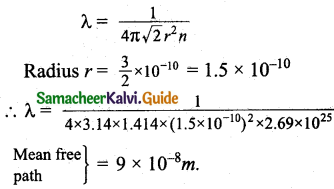