I. Choose the best answer.

Question 2.
indicates the purpose or theme of the map.
(a) Title
(b) Scale
(c) Direction
(d) Legend
Answer:
(a) Title

Question 4.
Which one of the following maps show us a very large area with less details?
(a) Large scale
(b) Thematic
(c) Physical
(d) Small scale
Answer:
(d) Small scale

III. Consider the given statements and choose the right option given below

Question 1.
Name the different methods to represent the Earth.
Answer:
The three methods in widest use are as follows:

Question 2.
What is a map?
Answer:

Question 2.
A map is the basic tool of a geographer.
Answer:

A grid is a set of lines with alphanumeric codes for defining a location on a map in many topographical sheets. The lines that run horizontally from left to right of the map are known as northings, whereas, the lines that run vertically from the top to the bottom of the map are called eastings. The points at which the vertical and horizontal lines of the grid intersect are called coordinates which are identified by numbers or letters.

Question 1.
What do you mean by the term ‘scale of the map’? Explain its classification.
Answer:
Scale makes it possible to reduce the size of the whole earth to show it on a piece of paper. A scale is a ratio between the actual distance on the map to the actual distance on the ground. Scales can be represented in three methods. They are the Statement, Representative Fraction (R.F) and Linear or Graphical scale methods.

Statement scale
The statement scale describes the relationship of map distance to ground distance in words, such as one centimetre to ten kilometres. It is expressed as 1cm =10 km.

The Representative Fraction (R.F)
It describes the proportion or ratio of the map distance to ground distance. It is usually abbreviated as R.F. It is stated as 1/100000 (or) 1:100000. This means that one unit on the map represents 100,000 of the same unit on the ground. This unit may be an inch or a centimetre or any other linear measurement unit. Thus, Representative Fraction (R.F.) = Distance on the map/ Distance on the ground.

Question 2.
Write a note on directions with a relevant diagram.
Answer:

Question 3.
Explain the major uses of GPS? Explain about anyone.
Answer:
The Global Positioning System (GPS) is a U.S. owned utility that provides users with positioning, navigation, and timing services (PNT). This system consists of three segments: the space segment, the control segment, and the user segment.

Space Segment: This is formed by a Satellite Constellation with enough satellites to ensure that the users will have at least 4 simultaneous satellites in view from any point at the Earth Surface at any time. 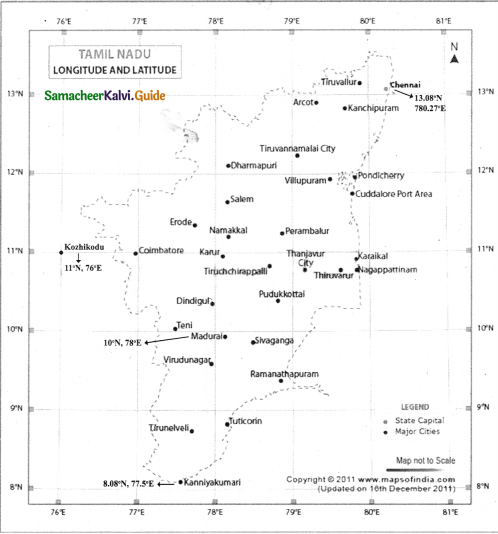 Question 2.
Imagine you are a cartographer. Draw the map of your area.
Hints:

Question 1.
Imagine you are standing in India facing north, find in which direction are the following located using the map given below
Answer: 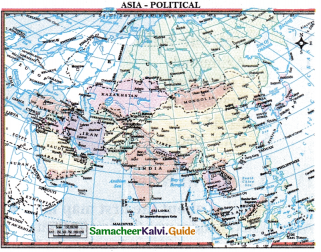 I. Choose the best answer

II. Consider the given statements and choose the right option given below.

The carved map depicts Babylon at the centre. Nearby are places like Assyria and Elam, all surrounded by a “Salt Sea” forming a ring around the cities. Outside the ring, eight islands or regions are carved onto the tablet. The map is accompanied by a cuneiform text describing Babylonian mythology in the regions depicted on the stone.

Question 2.
Who is a cartographer?
Answer:
A cartographer is one who measures, analyzes and interprets geographical information to create ‘ maps and charts for political, cultural and educational purposes.

Question 4.
What is a travelogue?
Answer:
A travelogue includes all the information required by a tourist like communication, transportation, hotels, tourist spots, health centres, ATMs, petrol stations etc.

Question 9.
What is meant by cybercartography?
Answer:
Cyber cartography is a term that is used to define all the aspects of the current state of Web and virtual mapping.

Question 10.
What is a survey?
Answer:
Surveying is done to measure the angle, direction, area, height and distance of an object or place on the surface of the earth using instruments. Surveying techniques are used to obtain the field data and to prepare maps. Knowledge of surveying helps one in map-making, particularly in the preparation of physical maps.

Question 11.
What are the advantages of Bhuvan?
Answer:

Question 1.
“It is not possible to show all the data of an area on a map”.
Answer:
The details that are to be shown may vary according to requirement. Therefore, it is essential to consider the scale and purpose while preparing maps.

Question 2.
What are the colour codes used with map symbols?
Answer:

Question 3.
Explain the types of maps.
Answer:
(a) On the basis of scale, maps can be classified into:

(b) On the basis of utility and purpose, they are classified as:

(b) Disadvantages of Remote sensing:

Question 7.
How is remote sensing useful in disaster management?
Answer: