Question 12.
What is the cell wall composition of the following organism?

Question 13.
How imbibition is important for plants?
Significance of imbibition:
Answer:

Question 17.
Write a note on endosymbiont theory?
Answer:
Two eukaryotic organelles believed to be the descendants of the endosymbiotic prokaryotes. The ancestors of the eukaryotic cell engulfed a bacterium and the bacteria continued to function inside the host cell.

Question 18.
What are sieve tubes? Explain?
Answer:
Sieve Elements:
Sieve elements are the conducting elements of the phloem. They are of two types, namely sieve cells and sieve tubes.

Sieve Cells:
These are primitive type of conducting elements found in Pteridophytes and Gymnosperms. Sieve cdlls have sieve areas on their lateral walls only. They are not associated with companion cells.

The end wall contains a number of pores and it looks like a sieve. So it is called as sieve plate. The sieve elements show nacreous thickenings on their lateral walls.

They may possess simple or compound sieve plates. The function of sieve tubes are believed to be controlled by campanion cells. In mature sieve tube, Nucleus is absent. It contains a lining layer of cytoplasm.

A special protein (P. Protein = Phloem Protein) called slime body is seen in it. In mature sieve tubes, the pores in the sieve plate arc blocked by a substance called callosc (callose plug). 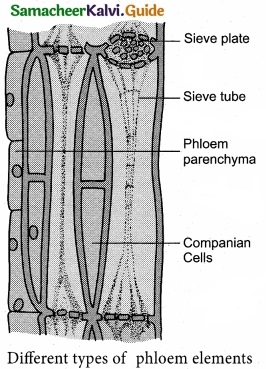 Question 19.
Draw and label the structure of lentical?
Answer: Question 20.
List out the salient features of cyanobacteria?
Answer:

Differentiate between Mitosis and Meiosis?
Answer:

Question 21.
Write in detail about Passive Absorption of minerals salts?
Answer:
Ion-Exchange:
Ions of external soil solution were exchanged with same charged (anion for anion or cation for cation) ions of the root cells. There are two theories explaining this process of ion exchange namely:

1. Contact Exchange Theory:
According to this theory, the ions adsorbed on the surface of root cells and clay particles (or clay micelles) are not held tightly but oscillate within a small volume of space called oscillation volume. Due to small space, both ions overlap each other’s oscillation volume and exchange takes place.

2. Carbonic Acid Exchange Theory:
According to this theory, soil solution plays an important role by acting as a medium for ion exchange. The CO2 released during respiration of root cells combines with water to form carbonic acid (H2CO3).

Carbonic acid dissociates into H+ and HCO32– in the soil solution. These H+ ions exchange with cations adsorbed on clay particles and the catipns from micelles get released into soil solution and gets adsorbed on root cells. 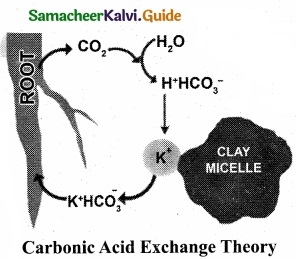 Give an detail account on different types of senescence?
Answer:
1. Overall senescence:
This kind of senescence occurs in annual plants when entire plant gets affected and dies.
Example: Wheat and Soybean. It also occurs in few perennials also. Example: Agave and Bamboo.

2. Top senescence:
It occurs in aerial parts of plants. It is common in perennials, underground and root system remains viable.
Example: Banana and Gladiolus.

3. Deciduous senescence:
It is common in deciduous plants and occurs only in leaves of plants, bulk of the stem and root system remains alive.
Example: Elm and Maple.

4. Progressive senescence:
This kind of senescence is gradual. First it occurs in old leaves followed by new leaves then stem and finally root system. It is common in annuals.

Question 7.
Inflammation of joints due to accumulation of uric acid crystals is called as ………………………..
(a) Myasthenia gravis
(b) Gout
(c) Osteoporosis
(d) Osteomalacia
Answer:
(b) Gout

Question 9.
What is Regeneration?
Answer:
The ability to regrow the lost parts is called regeneration eg. planaria.

Question 10.
What are the functions of Tapetum lucidum?
Answer:
A reflective layer of tissue called tapetum lucidum, enhances night time vision in most of the animals like cat.

Question 13.
Brief notes on spinal nerves?
Answer:
Spinal nerves:
31 pairs of spinal nerves emerge out from the spinal cord through spaces called the intervertebral foramina found between the adjacent vertebrae. The spinal nerves are named according to the region of vertebral column from which they originate

Each spinal nerve is a mixed nerve containing both afferent (sensory) and efferent (motor) fibres. It originates as two roots: 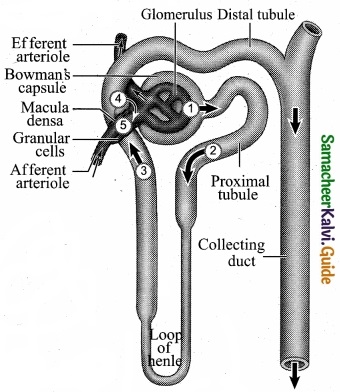 Question 18.
Draw the diagram and label the parts of micro villi?
Answer: 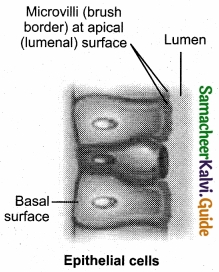 Question 19.
What are the advantages of artificial insemination?
Answer:

Animals in which the cells are arranged in two embryonic layers, the external ectoderm, and internal endoderm are called diploblastic animals. In these animals the ectoderm gives rise to the epidermis (the outer layer of the body wall) and endoderm gives rise to gastrodermis (tissue lining the gut cavity). An undifferentiated layer present between the ectoderm and endoderm is the mesoglea. (Corals, Jellyfish, Sea anemone)

Explain the reproductive system of frog?
Answer:
Reproductive system:
The male frog has a pair of testes which are attached to the kidney and the dorsal body wall by folds of peritonium called mesorchium. Vasa efferentia arise from each testis. They enter the kidneys on both side and open into the bladder canal. Finally, it communicates with the urinogenital duct that comes out of kidneys and opens into the cloaca.

Female reproductive system consists of paired ovaries, attached to the kidneys, and dorsal body wall by folds of peritoneum called mesovarium. There is a pair of coiled oviducts lying on the sides of the kidney. Each oviduct opens into the body-cavity at the anterior end by a funnel like opening called ostia.

Unlike the male frog, the female frog has separate genital ducts distinct from ureters. Posteriorly the oviducts dilated to form ovisacs before they open into cloaca. Ovisacs store the eggs temporarily before they are sent out through the cloaca. Fertilization is external.

Within few days of fertilization, the eggs hatch into tadpoles. A newly hatched tadpole lives off the yolk stored in its body. It gradually grows larger and develops three pairs of gills.

The tadpole grows and metamorphosis into an air – breathing carnivorous adult frog. Legs grow from the body, and the tail and gills disappear. The mouth broadens, developing teeth and jaws, and the lungs become functional.

Symptoms include dysuria (painful urination), urinary urgency, fever and sometimes cloudy or blood tinged urine. When the kidneys are inflammed, back pain and severe headache often occur. Most urinary tract infections can be treated by antibiotics.

Renal Failure (Kidney Failure):
Failure of the kidneys to excrete wastes may lead to accumulation of urea with marked reduction in the urine output. Renal failure are of two types, Acute and chronic renal failure.

Uremia:
Uremia is characterized by increase in urea and other non – protein nitrogenous substances like uric acid and creatinine in blood. Normal urea level in human blood is about 17 – 30mg/100mL of blood. The urea concentration rises as 10 times of normal levels during chronic renal failure.

Renal calculi:
Renal calculi, also called renal stone or kidney stone or nephrolithiasis, is the formation of hard stone like masses in the renal tubules of renal pelvis.

It is mainly due to the accumulation of soluble crystals of salts of sodium oxalates and certain phosphates. This result in severe pain called “renal colic pain” and can cause scars in the kidneys. Renal stones can be removed by techniques like pyleothotomy or lithotripsy.

Glomerulonephritis:
It is also called Bright’s disease and is characterized by inflammation of the glomeruli of both kidneys and is usually due to post-streptococcal infection that occurs in children. Symptoms are haematuria, proteinuria, salt and water retention, oligouria, hypertension and pulmonary oedema.

This moth is unisexual in nature and does not feed during its very short life period of 2 – 3 days. Just after emergence, male moth copulates with female for about 2 – 3 hours and if not separated, they may die after few hours of copulating with female.

Just after copulation, female starts egg laying which is completed in 1-24 hours. A single female moth lays 400 to 500 eggs depending upon the climatic conditions.

The eggs after ten days of incubation hatch into larva called as caterpillar. The newly hatched caterpillar is about 3 mm in length and is pale, yellowish-white in colour. The caterpillars are provided with well developed mandibulate type of mouth-parts adapted to feed easily on the mulberry leaves.

After 1st, 22nd, 3rd and 4th moultings caterpillars get transformed into 2nd, 3rd, 4th and 5th instars respectively. It takes about 21 to 25 days after hatching. The fully grown caterpillar is 7.5 cm in length. It develops salivary glands, stops feeding and undergoes pupation.

The caterpillars stop feeding and move towards the comer among the leaves and secretes a sticky fluid through their silk gland. The secreted fluid comes out through spinneret (a narrow pore situated on the hypopharynx) and takes the form of long fine thread of silk which hardens on exposure to air and is wrapped around the body of caterpillar in the forms of a covering called as cocoon.

It is the white coloured bed of the pupa whose outer threads are irregular while the inner threads are regular. The length of continuous thread secreted by a caterpillar for the formation of cocoon is about 1000 – 1200 metres which requires 3 days to complete. The pupal period lasts for 10 to 12 days and the pupae cut through the cocoon and emerge into adult moth.