Answer all the Questions: [15 × 1 = 15]
Choose the most suitable answer from the given four alternatives. 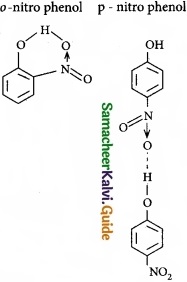 Question 17.
What are quantum numbers?
Answer:

Question 19.
Calculate the pressure exerted by 2 moles of sulphur hexafluoride in a steel vessel of volume 6 dm3 at 70°C assuming it is an ideal gas?
Answer:
We will use the ideal gas equation for this calculation as below:
P = \(\frac{nRT}{V}\) = image 7 = 9.39 atm.

Question 20.
What are the important features of lattice enthalpy?
Answer:

Question 21.
What are aqueous and non-aqueous solution? Give example?
Answer:

Question 22.
What is bond enthalpy? How they relate with bond strength?
Answer:
The bond enthalpy is defined as the minimum amount of energy required to break one mole of a particular bond in molecules in their gaseous state. Larger the bond enthalpy stronger will be the bond.

(II) The most important type of triad system is keto-enol tautomerism and the two groups of tautomers are keto form and enol form.

Question 24.
What is stone leprosy? How is it formed?
Answer: (III) Since ∆ng = 2 -2 = 0, thus, pressure has no effect. So by increasing the pressure, equilibrium will not be affected.

Question 30.
Derive the relationship between the relative lowering of vapour pressure and mole fraction of the solute?
Answer:

Question 31.
Differentiate between the principle of estimation of nitrogen in an organic compound by

1. Dumas method:
The organic compound is heated strongly with excess of CuO (Cupic Oxide) in an atmosphere of CO2 where free nitrogen, CO2 and H2O are obtained.

(b) (I) Consider the following electronic arrangements for the d5 configuration?

Question 35 (a).
(I) State the Newland’s law of octaves?
(II) What are the two exceptions of block division in the periodic table?

(b) (I) Complete the following reactions.
(a)

1. Helium has two electrons. Its electronic configuration is 1s2. As per the configuration, it is supposed to be placed in ‘s’ block, but actually placed in 18th group which belongs to ‘p’ block. Because it has a completely filled valence shell as the other elements present in 18th group. It also resembles with 18th group elements in other properties. Hence helium is placed with other noble gases.

2. The other exception is hydrogen. It has only one s-electron and hence can be placed in group 1. It can also gain an electron to achieve a noble gas arrangement and hence it can behave as halogens (17th group elements). Because of these assumptions, position of hydrogen becomes a special case. Finally, it is placed separately at the top of the periodic table.

(b) Beryllium chloride is treated with LiAlH4 to get beryllium hydride.
2BeCl2 + LiAlH4 → 2BeH2 + Licl + Alcl3

(b)
(I) Explain how the equilibrium constant Kc predict the extent of a reaction? (3)
(II) Explain about the effect of catalyst in an equilibrium reaction? (2)
Answer:
(a) (I) The first law of thermodynamics states that “the total energy of an isolated system . remains constant though it may change from one form to another” (or) Energy can neither be created nor destroyed, but may be converted from one form to another.
(II) The complete ethylene combustion reaction can be written as,

(II) Addition of catalyst does not affect the state of equilibrium. The catalyst increases the rate of both the forward and reverse reactions to the same extent. Hence it does not change the equilibrium composition of the reaction mixture.

(II) What is meant by condensed structure? Explain with an example.

(b)
(I) Why cut apple turns a brown colour?
(II) Predict the product for the following reaction,

(II) The bond line structure can be further abbreviated by omittiilg all the these dashes representing covalent bonds and by indicating the number of identical groups attached to an atom by a subscript. The resulting expression of the compound is called a condensed structural formula.
e.g., 1,3 – butadiene. 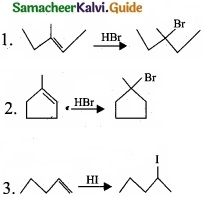 Question 38 (a).
Suggest the route for the preparation of the following from benzene?

(b) A hydrocarbon C3H6 (A) reacts with HBr to form compound (B). Compound (B) reacts with aqueous potassium hydroxide to give (C) of molecular formula C3H6O. What are (A) (B) and (C). Explain the reactions?
Answer:
(a)
1. Preparation of 3 – chloronitro – benzene from benzene: Benzene undergoes nitration and followed by chlorination and it leads to the formation of 3 – chloronitrobenzene.

2. Preparation 4-chlorotoulene from benzene: Benzene undergoes Friedal craft’s alkylation followed by chlorination and it leads to the formation of 4 – chlorotoulene.

3. Preparation of Bromobenzene from benzene: Benzene undergo bromination to give bromobenzene. 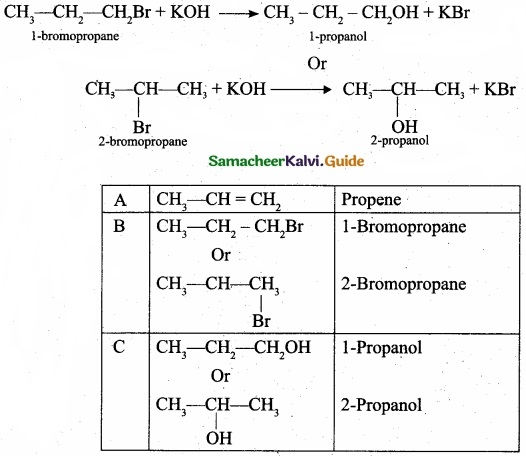