Question 1.
In the first five year plan, the top priority was given to ………………. sector?
(a) Service
(b) Industrial
(c) Agriculture
(d) Bank
Answer:
(b) Industrial

Question 5.
Wage is an example for …………. cost of the production.
(a) Fixed
(b) Variable
(c) Marginal
(d) Opportunity
Answer:
(b) Variable

Question 6.
Innovation Theory of profit was given by ………………
(a) Hawley
(b) Schumpeter
(c) Keynes
(d) Knight
Answer:
(b) Schumpeter

Question 10.
………………… have exchange value and their ownership rights can be established and exchanged.
(a) Goods
(b) Services
(c) Markets
(d) Revenue
Answer:
(a) Goods

Question 13.
“Wages as a sum of money are paid under contract by an employer to a worker for services rendered.” Who said this?
(a) Benham
(b) Marshall
(c) Walker
(d) J. S. Mill
Answer:
(a) Benham

Question 21.
Define disinvestment?
Answer:
Disinvestment means selling of government securities of Public Sector Undertakings [PSUs] to other PSUs or Private Sectors or banks. This process has not been fully implemented.

Question 24.
What is the difference between HDI and PQLI?
Answer:

1. Land:
In Economics, land means all gifts of Nature owned and controlled by human beings which yield an income.

3. Capital:
“Capital consists of all kinds of wealth other than free gifts of nature, which yield income”. Bohm – Bawerk defines it as ‘a produced means of production’.

4. Organisation:
The man behind organizing the business is called as ‘Organizer’ or ‘Entrepreneur’.

Question 29.
What are the characteristics of land?
Answer:

Question 30.
Give the meaning of deductive method?
Answer:

Question 31.
What are the features of a market?
Answer:
A market has the following characteristic features:

Question 36.
Discuss the long run cost curves with suitable diagram?
Answer:
1. In the long run all factors of production become variable. The existing size of the firm can be increased in the case of long run. There are neither fixed inputs nor fixed costs in the long run.

2. LAC is given in diagram. 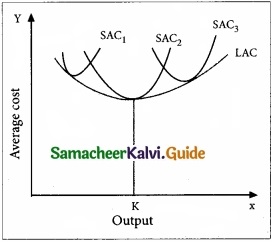 Question 37.
Elucidate different features of services?
Answer:
Along with goods, services, are produced and consumed. They are generally, possess the following:

(III) Inseparable from their makers:
Services are inextricably connected to their makes. For example, labour and labourers are inseparable.

Question 39.
State the reasons for nationalization of commercial banks?
Answer:

Question 40.
Write a short note on Welfare Economics given by Amartya Sen?
Answer:

(b) Elucidate the loanable funds theory of Interest?
Answer:

(I) Demand for Investment [I]

Supply of Loanable funds:
The supply of loanable funds depends upon the following four sources:

1. Savings [S]:
Loanable funds comes from savings. According to this theory, savings may be of two types, namely,

2. Bank Credit [BC]:
The bank credit is another source of loanable funds. Commercial banks create credit and supply loanable funds to the investors.

3. Dishoarding [DH]:
Dishoarding means bringing out the hoarded money into use and thus it constitutes a source of supply of loanable funds.

Question 42 (a).
Illustrate the uncertainty Bearing Theory of profit?
Answer:
Uncertainty theory was propounded by the American economist Frank H.Knight. Profit is the reward for “ uncertainty bearing”. He distinguishes between “ Insurable” and “non – insurable” risks.

(b) Write a brief note on the Gandhian economic ideas?
Answer:
Gandhian Economics is based on ethical foundations. Gandhi wrote “ Economics that hurts the moral well-being of an individual or a nation is immoral, and therefore , Sinful”. Gandhi repeated the same belief “ that economy is untrue which ignores or disregards moral values”.

(IV) Decentralization:
Gandhi advocated a decentralized economy i.e., production at a large number of places on a small scale or production in the people’s homes.

(VII) The Doctrine of Trusteeship:
Trusteeship provides a means of transforming the present capitalist order of society into an egalitarian one.

(VIII) On the Food Problem:

Question 43 (a).
Explain the various sources of energy in Tamil Nadu?
Answer:
Tamil Nadu tops in power generation among the Southern States as seen in the table. 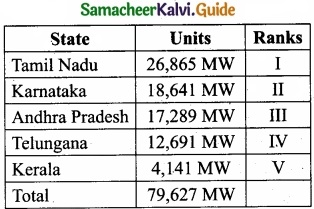 Tamil Nadu 26,865 MW in 1st Rank in the energy level. Tamil Nadu is in the forefront of all other Indian States in installed capacity. Muppandal wind farm is a renewable energy source, supplying the villagers with electricity for work.

Wind farms were built in Nagercoil and Tuticorin apart from already existing ones around Coimbatore, Pollachi, Dharapuram and Udumalaipettai. These areas generate about half of India’s 2,000 megawatts of wind energy or two percent of the total power output of India. 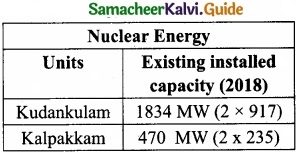 Question 44 (a).
Explain the causes for Rural Backwardness?
Answer:

(I) Village is an Institution:
The village is a Primary Institution and it satisfies almost all the needs of the rural community. The rural people have a feeling of belongingness and a sense of unity towards each other.

(II) Dependence on Agriculture:
The rural economy depends much on nature and agricultural activities. Agriculture and allied activities are the main occupation in rural areas.

(III) Life of Rural people:
Lifestyles in villages are very simple. Public services like education, housing, health and sanitation, transport and communication, banking, roads and markets are limited and unavailable. The standards of living of majority of rural people are poor and pitiable. In terms of methods of production, social organization and political mobilization, rural sector is extremely backward and weak.

(IV) Population Density:
Population density, measured by number of persons living per sq.km is very low and houses are scattered in the entire villages.

(VI) Poverty:
Poverty is a condition where the basic needs of the people like food, clothing and shelter are not being met.

(VIII) Rural Income:
The Income of the rural people is constrained as the rural economy is not sufficiently vibrant to provide them.

(X) Dualism:
Dualism means the co – existence of two extremely different features like developed and under developed. These characteristics are very common in rural areas.

(XI) Inequality:
The distributions of income, wealth and assets are highly skewed among rural people. Land, livestock and other assets are owned by a few people.

(XII) Migration:
Rural people are forced to migrate from villages to urban areas in order to seek gainful employment for their livelihood. Question 46 (a).
Write a short note on Marginal Revenue?
Answer:

(I) First degree price discrimination:
A monopolist charges the maximum price that a buyer is willing to pay. This is called as perfect price discrimination. This price wipes out the entire consumer’s surplus. This is maximum exploitation of consumers. Joan Robinson named it as “Perfect Discriminating Monopoly”.

(II) Second degree price discrimination:
Under this degree, buyers are charged prices in such a way that a part of their consumer’s surplus is taken away by the sellers. This is called as imperfect price discrimination. Joan Robinson named it as “Imperfect Discriminating Monopoly”.

Under this degree, buyers are divided into different groups and a different price is charged for each group. For example, in cinema theatres, prices are charged for same film show from viewers of different classes. In a theatre the difference between the first row of first class and the last row in the second class is smaller as compared to the differences in charges..

(III) Third degree price discrimination:
The monopolist splits the entire market into a few sub – market and charges different price in each sub – market. The groups are divided on the basis of age, sex and location. For example, railways charge lower fares from senior citizens. Students get discounts in museums, and exhibitions.

Question 47 (a).
Elaborate the nature and scope of Economics?
Answer:
Economics nature:

(b) Explain the Internal and external economics of scale?
Answer:
Internal Economics of Scale: