Question 11.
In which of the following is not a type of market structure price will be very high?
(a) Perfect competition
(b) Monopoly
(c) Duopoly
(d) Oligopoly
Answer:
(b) Monopoly

Question 21.
State the meaning of privatization?
Answer:
Privatization means transfer of ownership and management of enterprises from public sector to private sector.

Question 22.
What are the reasons for upward sloping supply curve?
Answer:

Question 23.
Give a short note on Sen’s “choice of Technique”?
Answer:
Sen’s “Choice of Technique” was a research work where he argued that in a labour surplus economy; generation of employment cannot be increased at the initial stage by the adaptation of capital – intensive technique.

Question 24.
What are major ports in Tamil Nadu?
Answer:

Question 25.
Define cost function?
Answer:
The function relationship between cost and output is expressed as ‘Cost Function’.
A Cost Function may be written as
C = f(Q)
Eg. TC = Q3 – 18Q2 + 91Q + 12
Where, C = Cost and Q = Quantity of output. Cost functions are derived functions because they are derived from Production Functions.

Question 26.
What are the main menus of MS word?
Answer:

Question 29.
What are conditions for producer’s equilibrium?
Answer:

Question 32.
Explain the difference between internal and external economies?
Answer:

Question 33.
State and explain the elasticity of supply?
Answer:

Question 35.
What are the motives of demand for money?
Answer:
Motives of Demand for Money:
According to Keynes, there are three motives for liquidity preference. They are:

3. The Speculative Motive:
The speculative motive relates to the desire of the people to hold cash in order to take advantage of market movements regarding the future changes in the price of bonds and securities in the capital market. The amount saved for this motive depends on the rate of interest.

MS = f(i). There is inverse relation between liquidity preference and rate of interest.

Question 36.
State Ambedkar’s Economic Ideas on agricultural economics?
Answer:
In the 1918, Ambedkar published a paper “Small Holding in India and their Remedies”. Citing Adam Smith’s “Wealth of Nations”, he made a fine distinction between “Consolidation of Holdings” and Enlargement of Holdings”.

At equilibrium point, the slope of IC refers to MRSXY and the slope of BL (Budget Line) refers to ratio of price of X to price of Y i.e. Px / Py . Therefore MRSx,y = Px / Py.

Question 40.
List out the kinds of wages:
Answer:
Wages are divided into four types.

Question 41 (a).
Write a brief note on the Gandhian economic ideas?
Answer:
Gandhian Economics is based on ethical foundations. Gandhi wrote “ Economics that hurts the moral well-being of an individual or a nation is immoral, and therefore , Sinful”. Gandhi repeated the same belief “ that economy is untrue which ignores or disregards moral values”.

(IV) Decentralization:
Gandhi advocated a decentralized economy i. e., production at a large number of places on a small scale or production in the people’s homes.

(VII) The Doctrine of Trusteeship:
Trusteeship provides a means of transforming the present capitalist order of society into an egalitarian one.

(VIII) On the Food Problem:

(I) Poverty of Farmers:

(b) Explain the law of demand and its exceptions?
Answer:
Definitions:
The Law of Demand says as “the quantity demanded increases with a fall in price and diminishes with a rise in price”. – Marshall
“The Law of Demand states that people will buy more at lower price and buy less at higher prices, other things remaining the same”. – Samuelson Assumptions of Law of Demand: 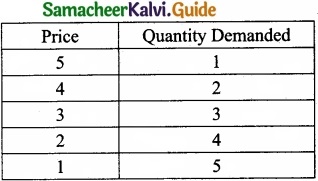 Exceptions to the law of demand:
Normally, the demand curve slopes downwards from left to right. But there are some unusual demand curves which do not obey the law and the reverse occurs.

A fall in price brings about a contraction of demand and a rise in price results in an extension of demand. Therefore the demand curve slopes upwards from left to right. It is known as exceptional demand curve.

In the above diagram, DD is the demand curve which slopes upwards from left to right. It shows that when price is OP1,, OQ1, is the demand and when the price rises to OP2, demand also extends to OQ2. 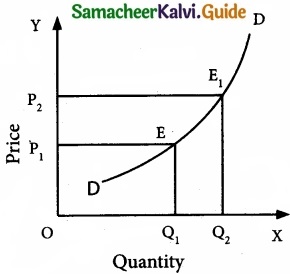 (I) First degree price discrimination:
A monopolist charges the maximum price that a buyer is willing to pay. This is called as perfect price discrimination. This price wipes out the entire consumer’s surplus. This is maximum exploitation of consumers. Joan Robinson named it as “Perfect Discriminating Monopoly”.

(II) Second degree price discrimination:
Under this degree, buyers are charged prices in such a way that a part of their consumer’s surplus is taken away by the sellers. This is called as imperfect price discrimination. Joan Robinson named it as “Imperfect Discriminating Monopoly”.

Under this degree, buyers are divided into different groups and a different price is charged for each group. For example, in cinema theatres, prices are charged for same film show from viewers of different classes. In a theatre the difference between the first row of first class and the last row in the second class is smaller as compared to the differences in charges.

(III) Third degree price discrimination:
The monopolist splits the entire market into a few sub – market and charges different price in each sub – market. The groups are divided on the basis of age, sex and location. For example, railways charge lower fares from senior citizens. Students get discounts in museums, and exhibitions.

(b) Write a short note on Total Revenue?
Answer:
Total revenue is the amount of income received by the firm from the sale of its products. It is obtained by multiplying the price of the commodity by the number of units sold. 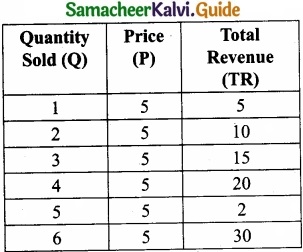 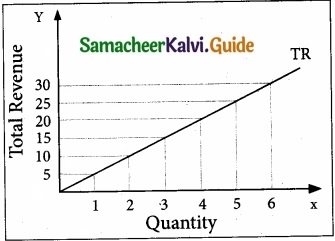 When price is constant, the behaviour of TR is shown in the above table and diagram, assuming P = 5. When P = 5; TR = PQ

When price is declining with increase in quantity sold. (Eg. Imperfect Competition on the goods market) the behaviour of TR is shown in the following table and diagram. TR can be obtained from Demand fuction: If Q = 11 – P,
When P = 1, Q = 10 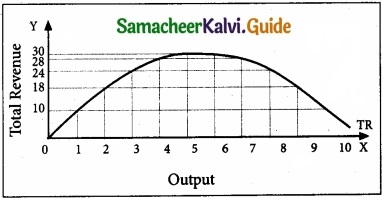 Question 44 (a).
Discuss the problems of Rural Economy?
Answer:
Rural areas are facing number of problems relating to,

(I) People Related Problems:
The problems related to individuals and their standard of living consist of illiteracy, lack of technical know how, low level of confidence, dependence on sentiments and beliefs etc.

(II) Agriculture Related Problems:
The problems related to agriculture include as follows,

2. Lack of Non – Farm Employment:
Non – farm employment opportunities do not match the increasing labour force. The excess supply of labour in rural areas reduces the wages and increases the incidence of poverty.

6. Unequal Benefit of Growth:
Major gains of economic development are enjoyed by the urban rich people leading to concentration of wealth. Due to defective economic structure and policies, gains of growth are not reaching the poor and the contributions of poor people are not accounted properly.

7. Low Rate of Economic Growth:
The rate of growth of India is always below the target and it has benefited the rich. The poor are always denied of the benefits of the achieved growth and development of the country.

8. More Emphasis on Large Industries:
Huge investment in large industries catering to the needs of middle and upper classes in urban areas are made in India. Such industries are capital-intensive and do not generate more employment opportunities. Therefore, poor are not in a position to get employed and to come out from the poverty in villages. 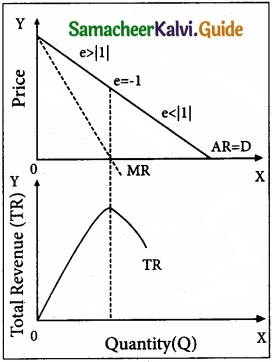 It is to be noted that, the output range of 1 to 5 units, the price elasticity of demand is greater than one according to total outlay method. Hence, TR is increasing and MR is positive.
TR, AR, MR & Elasticity 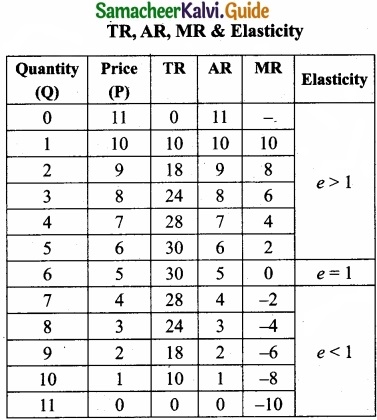 (b) Explain the monetary and financial sector reforms?
Answer:
Monetary reforms aimed at doing away with interest rate distortions and rationalizing the structure of lending rates. The new policy tried in many ways to make the banking system more efficient. Some of the measures undertaken were:

Question 46 (a).
Examine the law of variable proportions with the help of a diagram?
Answer:
The law states that if all other factors are fixed and one input is varied in the short run, the total output will increase at an increasing rate at first instance^ be constant at a point and then eventually decrease. Marginal product will become negative at last.

Assumptions:
The Law of Variable Proportions is based on the following assumptions.

Total Product (TP)
Total product refers to the total amount of commodity produced by the combination of all inputs in a given period of time. 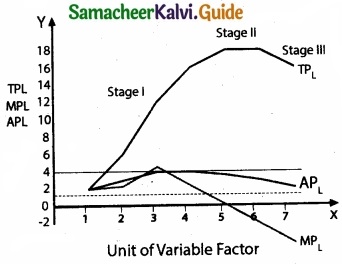 In above table, units of variable factor (labour) are employed along with other fixed factors of production. The table illustrates that there are three stages of production. Though total product increases steadily at first instant, constant at the maximum point and then diminishes, it is always positive forever.

In diagram, the number of workers is measured on X axis while TPL, APL and MPL are denoted on Y axis. The diagram explains the three stages of production as given in the above table.

Stage II:
In the second stage, MPL decreases up to sixth unit of labour where MPL curve intersects the X – axis. At fourth unit of labor MPL = APL. After this, MPL curve is lower than the APL. TPL increases at a decreasing rate.

Stage III:
Third stage of production shows that the sixth unit of labour is marked by negative MPL, the APL continues to fall but remains positive. After the sixth unit, TPL declines with the employment of more units of variable factor, labour.

2. Unitary Elastic Supply:
The co – efficient of elastic supply is equal to 1 [Eg = 1]. One percent change in the price of a commodity causes an equal [one percent ] change in the quantity supplied of the commodity. 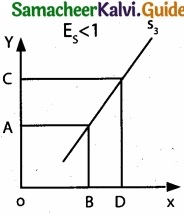 4. Perfectly Inelastic Supply:
The co – efficient of elasticity is equal to zero [ES = 0], One percent change in the price of a commodity causes no change in the quantity supplied of the commodity. 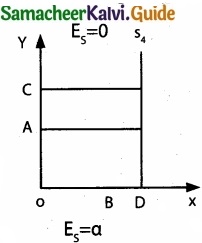 5. Perfectly Elastic Supply:
The co – efficient of elasticity of supply is infinity [ES = 3]. One percent change in the price of a commodity causes an infinite change in the quantity supplied of the commodity. 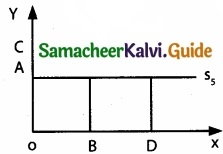 (b) Explain the public transport system in Tamil Nadu?
Answer:
Transport:
Tamil Nadu has a well established transportation system that connects all parts of the State. This is partly responsible for the investment in the State.

Tamil Nadu is served by an extensive road network in terms of its spread and quality, providing links between urban centres, agricultural market-places and rural habitations in the countryside. However, there is scope for improvement.