Question 12.
Which is considered as the basic unit for rural areas?
(a) Panchayat
(b) Village
(c) Town
(d) Municipality
Answer:
(b) Village

Question 26.
What are goods?
Answer:
Goods are also called:

Question 28.
State the features that distinguish a land tenure system from other system?
Answer:
(I) Land Tenure refers to the system of land ownership and management.

(II) The features that distinguish a land tenure system from the others relate to the following:

(III) Based on these questions, three different types of land tenure existed in India before Independence.

Question 29.
What is meant by Sunk cost?
Answer:
A cost incurred in the past and cannot be recovered in future is called as Sunk Cost. This is historical but irrelevant for future business decisions. It is called as sunk because; they are unalterable, unrecoverable and if once invested it should be treated as drowned or disappeared.

Question 30.
Point out the essential features of pure competition?
Answer:

Question 32.
How do you justify the merits of privatization?
Answer:

Question 33.
State and explain the elasticity of supply?
Answer:

Question 34.
What are the functions of Entrepreneur?
Answer:
Functions of an Entrepreneur:
1. Initiation:
An organizer is the initiator of the business, by considering the situation and availability of resources and planning the entire process of business of production.

2. Innovation:
A successful entrepreneur is always an innovator. He introduces new methods in the production process.

3. Co – ordination:
An organizer applies a particular combination of the factor of production, to start and run the business or production.

4. Control, Direction and Supervision:
An organiser controls so that nothing prevents the organisation from achieving its goal. He directs the factors to get better results and supeiVises for the efficient functioning of all the factors involved in the process of production.

Question 35.
List out the kinds of wages?
Answer:
Wages are divided into four types.

1. Nominal Wages or Money Wages:
Nominal wages are referred to the wages paid in terms of money.

3. Piece Wages:
Wages that are paid on the basis of quantum of work done.

4. Time Wages:
Wages that are paid on the basis of the amount of time that the worker works.

(b) What are the steps involved in executing a MS Excel sheet?
Answer:

Worksheet:
MS – Excel work sheet is a table like document containing rows and columns with data and formula.

There are four kinds of calculation operators. They are:

Question 42 (a).
Illustrate the concept of producer’s equilibrium?
Answer:
Producer equilibrium implies the situation where producer maximizes his output. It is also known as optimum combination of the factors of production. In short, the producer manufactures a given amount of output with ‘least cost combination of factors’, with his given budget.

Optimum Combination of Factors implies either:
There is output maximisation for given inputs or there is cost minimisation for the given output.

Conditions for Producer Equilibrium:
The two conditions that are to be fulfilled for the attainment of producer equilibrium are:
The iso – cost line must be tangent to iso – quant curve. At point of tangency, the iso-quant curve must be convex to the origin or MRTSLk must be declining. 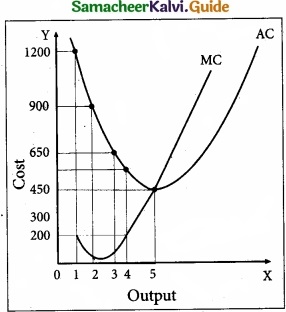 (b) Explain the law of demand and its exceptions?
Answer:
Definitions:
The Law of Demand says as “the quantity demanded increases with a fall in price and diminishes with a rise in price”. – Marshall
“The Law of Demand states that people will buy more at lower price and buy less at ‘ higher prices, other things remaining the same”. – Samuelson

Assumptions of Law of Demand: 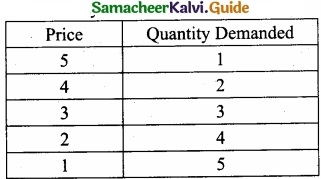 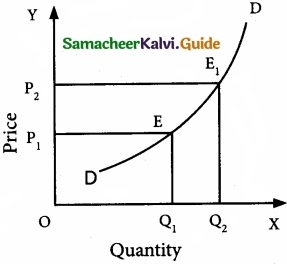 It is known as exceptional demand curve. In the above diagram, DD is the demand curve which slopes upwards from left to right. It shows that when price is OP1, OQ1, is the demand and when the price rises to OP2, demand also extends to OQ2.

Question 44 (a).
How price and output are determined under the perfect competition?
Answer:
Perfect Competition: Firm’s Equilibrium in the Short Run

In the short run, at least a few factors of production are fixed. The firms under Perfect Competition take the price (10) from the industry and start adjusting their quantities produced. For example Qd = 100 – 5P and Qs = 5P.

In the second part of the diagram, AC curve is lower than the price line. The equilibrium condition is achieved where MC = MR. Its equilibrium quantity sold is 50. With the prevailing price, ₹ 10 it experiences super normal profit. AC = ₹ 8, AR = ₹ 10.

This means a rise in the price of the product and reduction in the cost of production. So the loss will vanish; Profit will emerge. Consequent upon the entry and exit of new firms into the industry, firms always earn ‘normal profit’ in the long run as shown in diagram.

(b) Elucidate the Loanable funds Theory of Interest?
Answer:

(I) Demand for Investment [I]

Supply of Loanable funds:
The supply of loanable funds depends upon the following four sources:

1. Savings [S]:
Loanable funds comes from savings. According to this theory, savings may be of two types, namely,

2. Bank Credit [BC]:
The bank credit is another source of loanable funds. Commercial banks create credit and supply loanable funds to the investors.

3. Dishoarding [DH]:
Dishoarding means bringing out the hoarded money into use and thus it constitutes a source of supply of loanable funds.

(I) Village is an Institution:
The village is a Primary Institution and it satisfies almost all the needs of the rural community. The rural people have a feeling of belongingness and a sense of unity towards each other.

Dependence on Agriculture:
The rural economy depends much on nature and agricultural activities. Agriculture and allied activities are the main occupation in rural areas.

Life of Rural people:
Lifestyles in villages are very simple. Public services like education, housing, health and sanitation, transport and communication, banking, roads and markets are limited and unavailable.

The standards of living of majority of rural people are poor and pitiable. In terms of methods of production, social organization and political mobilization, rural sector is extremely backward and weak.

Population Density:
Population density, measured by number of persons living per sq.km is very low and houses are scattered in the entire villages.

Poverty:
Poverty is a condition where the basic needs of the people like food, clothing and shelter are not being met.

Rural Income:
The Income of the rural people is constrained as the rural economy is not sufficiently vibrant to provide them.

Dependency:
Rural households are largely dependent on social grants and remittances from family members working in urban areas and cities.

Dualism:
Dualism means the co-existence of two extremely different features like developed and under developed. These characteristics are very common in rural areas. Inequality: The distributions of income, wealth and assets are highly skewed among rural people. Land, livestock and other assets are owned by a few people.

Migration:
Rural people are forced to migrate from villages to urban areas in order to seek gainful employment for their livelihood.

(b) Explain the various sources of energy in Tamil Nadu?
Answer:
Tamil Nadu tops in power generation among the Southern States as seen in the table. Tamil Nadu 26,865 MW in 1st Rank in the energy level. Tamil Nadu is in the forefront of all other Indian States in installed capacity. 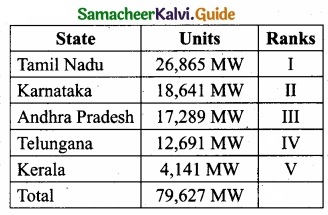 Muppandal wind farm is a renewable energy source, supplying the villagers with electricity for work. Wind farms were built in Nagercoil and Tuticorin apart from already existing ones around Coimbatore, Pollachi, Dharapuram and Udumalaipettai. These areas generate about half of India’s 2,000 megawatts of wind energy or two percent of the total power output of India.

2. Total Outlay Method:
Marshall suggested that the simplest way to decide whether demand is elastic or inelastic is to examine the change in total outlay of the consumer or total revenue of the firm Total Revenue = (Price × Quantity Sold)
TR = ( P × Q)

Where there is inverse relation between Price and Total Outlay, demand is elastic. Direct relation means inelastic. Elasticity is unity when Total Outlay is constant. 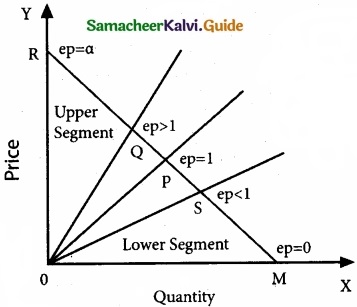 (b) Rao’s views on Industrialization:
Rao gave the following reasons for low per capita income and low levels of per capita nutrition in India.

The important features of Marshall’s definition are:

The major features of Robbins’ definition:

Definition:
Marshall states the law as, “If a person has a thing which he can put to several uses, he will distribute it among these uses in such a way that it has the same marginal utility in all. For, if it had a greater marginal utility in one use than another he would gain by taking away some of it from the second use and applying it to first”.

Illustration:
This law can be illustrated with the help of table. Let us assume that the consumer has a given income of ₹ 11. He wants to spend this entire income [i.e. ₹ 11] on Apple and Orange. The price of an Apple and the price of an orange is ₹ 1 each.

If the consumer wants to attain maximum utility, he should buy 6 units of apples and 5 units of oranges, so that she can get [92 + 58] = 150 units. No other combination of Apple and Orange can give higher than 150 utilities.