Question 4.
Which of the following transition metal is present in Vitamin B12 ?
(a) Cobalt
(b) Platinum
(c) Copper
(d) Iron
Answer:
(a) Cobalt

Question 6.
Consider the following statements.
(,i) metallic solids possess high electrical and thermal conductivity
(ii) solid ice are soft solids under room temperature
(iii) In non polar molecular solids constituent molecules are held together by strong electrostatic forces of attraction
Which of the above statements is./ are not correct?
(a) (i) & (ii)only
(b) (iii) only
(c) (ii) only
(d) (i) only
Answer:
(b) (iii) only 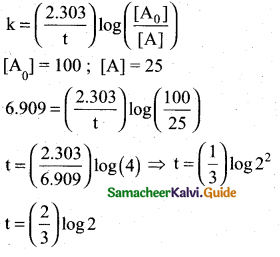 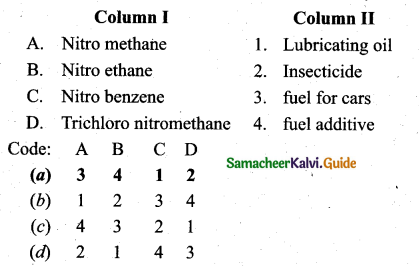 Question 14.
Which one of the following is levorotatory?

Question 15.
Which one of the following structures represents nylon 6,6 polymer?

Question 16.
Carbon monoxide is more effective reducing agent than carbon below 983 K but, above this temperature, the reverse is true -Explain.
Answer:
From the Ellingham diagram, we find that at 983 K, the curves intersect. 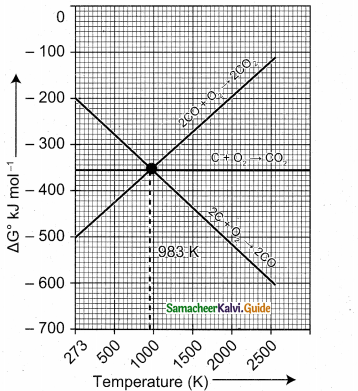 Question 17.
Mention the uses of the potash alum.
Answer:

II. Lewis bases:
(i) Lewis base is a species that donates an electron pair.
(ii) Lewis base is an anion (or) neutral molecule with atleast one lone pair of electrons.
(iii) Example, NH3, F–, CH2= CH2 CaO etc….

Question 21.
NH3, CO2 are readily adsorbed where as H2, N2 are slowly adsorbed. Give reason.
Answer:

Question 23. Arrange the following in decreasing order of basic strength

(ii) Nitrogroup has a powerfol electron withdrawing group and they have both -R effect as well as -I effect. As a result, all the nitro anilines are weaker bases than aniline. In P-nitroaniline

both R effect and -I effect of the NO2 group decrease the basicity.

Biopolymers are safe in use. They disintegrate by themselves in biological system during a certain period of time by enzymatic hydrolysis and to some extent by oxidation and hence, are biodegradable. As a result, they do not cause any pollution.

Question 25.
Explain Aluminothermic process.
Answer:
Metallic oxides such as Cr2O3 can be reduced by an aluminothermic process. In this process, the metal oxide is mixed with aluminium powder and placed in a fire clay crucible. To initiate the reduction process, an ignition mixture (usually magnesium and barium peroxide) is used.

During the above reaction a large amount of heat is evolved (temperature upto 2400°C, is generated and the reaction enthalpy is : 852 kJ-moF1) which facilitates the reduction of Cr2O3 by aluminium power.

Question 27.
[Ti (H2O)6 ]2+ is purple in colour. Prove this statement.
Answer:
(i) In [Ti (H2O)6 ]2+, the central metal ion is Ti3+ which has d1 configuration. This single electron occupies one of the ttgorbitals in the octahedral aqua ligand field.

(ii) When white light falls on this complex, the d electron absorbs light and promotes itself to eg level.

(iii) The spectral data show the absorption maximum is at 20000 cm-1 corresponding to the crystal field splitting energy (∆0) 239.7 kJ mol-1. The transmitted colour associated with this absorption is purple and hence the complex appears in purple in colour. 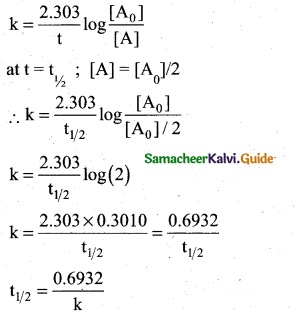 Question 30.
Explain the following observations.
(a) Lyophilic colloid is more stable than lyophobic colloid.
(b) Coagulation takes place when sodium chloride solution added to a colloidal solution of ferric hydroxide.
(c) Sky appears blue in colour.
AnsweR:
(a) A lyophilic sol is stable due to the charge and the hydration of the sol particles. Such a sol can only be coagulatd by removing the water and adding solvents like alcohol, acetone, etc. and then an electrolyte. On the other hand, a lyophobic sol is stable due to charge only and hence it can be easily coagulated by adding small amount of an electrolyte.

(c) The atmospheric particles of colloidal range scatter blue component of the white sunlight preferentially. That is why the sky appears blue.

Question 31.
Mention the uses of formic acid?
Answer:
Formic acid. It is used
(i) for the dehydration of hides.
(ii) as a coagulating agent for rubber latex
(iii) in medicine for treatment of gout
(iv) as an antiseptic in the preservation of fruit juice

Question 32.
Write the structure of all possible dipeptides which can be obtained from glycine and alanine.
Answer:

Therefore two dipeptides structures are possible from glycine and alanine. They are (i) glycyl alanine and (ii) Alanyl glycine

Question 33.
How the tranquilizers work in body?
Answer:

Question 34.
(a) (i) How will you purify metals by using iodine?(3)
(ii) Boron does not react directly with hydrogen. Suggest one method to
prepare diborane from BF3(2)
[OR]
(b) (i) Write the reason for the anomalous behaviour of Nitrogen. (3)
(ii) Mn2+ is more stable than Mn4+. Why? (2)
Answer:
(a) (i) This method is based on the thermal decomposition of metal compounds which lead to the formation of pure metals. Titanium and zirconium can be purified using this method. For example, the impure titanium metal is heated in an evacuated vessel with iodine at a temperature of 550 K to form the volatile titanium tetra-iodide.( TiI4 ). The impurities are left behind, as they do not react with iodine.
Ti(s) + 2I2(s) → TiI4 (vapour)

(ii) Boron does not react directly with hydrogen. However it forms a variety of hydrides
called boranes. Treatment of gaseous boron triuluoride with sodium hydride around
450 K gives diborane.

(b) (i) 1. Due to its small size, high electro negativity, high ionisation enthalpy and absence of d-orbitals.

2. N2 has a unique ability to form pπ- pπ multiple bond whereas the heavier members of this group (15) do not form pπ- pπ bond, because their atomic orbitals are so large and diffused that they cannot have effective overlapping.

3. Nitrogen exists a diatomic molecule with triple bond between the two atoms whereas other elements form single bond in the elemental state.

4. N cannot form dπ- dπ bond due to the absence of d-orbitals whereas other elements can.

(ii) The relative stability of different oxidation states of 3d metals is correlated with the extra stability of half-filled and fully filled electronic configurations.
Example: Mn2+ (3d5) is more stable than Mn4+ (3d3) 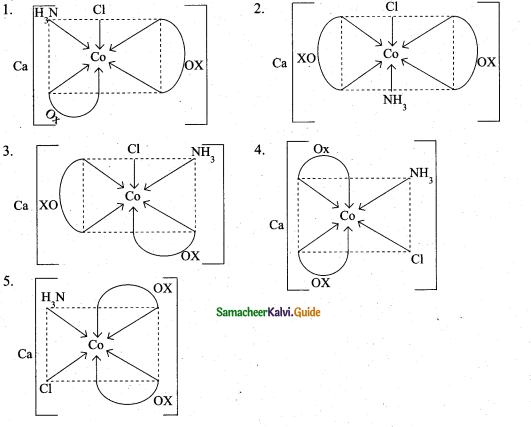 (ii) 1. X-ray diffraction analysis is the most powerful tool for the determination of crystal structure.

2. The interplanar distance (d) between two successive planes of atoms can be calculated using the following equation form the X-ray diffraction data 2d sin θ = nλ. The equation is known as Bragg’s equation
Where λ = wavelength of X-ray; d = Interplanar distance
θ = The angle of diffraction n = order of reflection
By knowing the values of λ, λ and n, we can calculate the value of d
\(d=\frac{n \lambda}{2 \sin \theta}\)

Using these values, the edge of the unit cell can be calculated.

Differences between order and molecularity:

Order of a reaction : 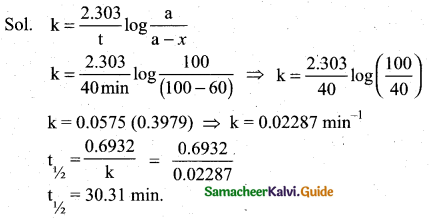 In the measurement of specific resistance of a metallic wire, a DC power supply is used. Here AC is used for this measurement to prevent electrolysis. Because DC current through the conductivity cell leads to the electrolysis of the solution taken in the cell. 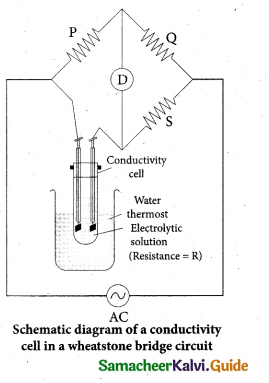 The value of cell constant \(\frac{l}{A}\) is usually provided by the cell manufacturer. Alternatively the cell constant may be determined using KC1 solution whose concentration and specific conductance are known.

Question 37.
(a) (1) What is metamerism? Give the structure and ¡UPAC name of metamers of 2-methoxy propane (2)
(ii) Explain the following reactions.

(2)
(OR]
(b) An organic compound (A) of molecular formula C7H8O on oxidation with alkaline KMnO4 gives (B) of formula C7H6O.
(B) on reaction with Cl2 in the presence of catalyst FeCl3 gives
(C) of formula C7H5OCl. (B) on reaction with Cl in the absence
of catalyst gives C7H5OCl. Identify A,B,C,D and explain the reaction involved.
Answer:
(a) (i) Metamerism: It is a special type of isomerism in which molecules with same formula, same functional group, but different only in the nature of the alkyl group attached to oxygen. 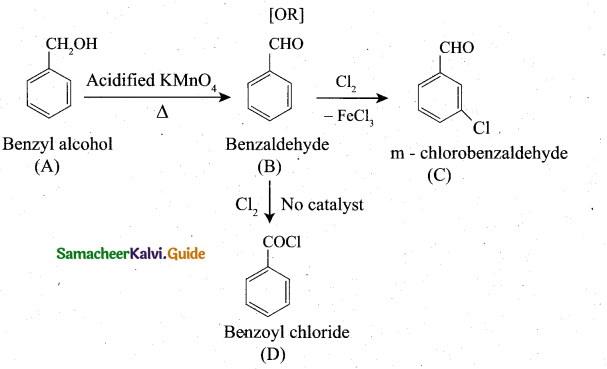 Question 38.
(a) (0 Account for the following:
1. Primary amines (R – NH2)have higher boiling point than tertiary amines (R3N).
2. Aniline does not undergo Friedel-Crafts reaction.
3. (CH3)2NH is more basic than (CH3)3N in an aqueous solution. (3)
(H) Name two fat soluble vitamins, their sources and the diseases caused due to
their deficiency in diet. (2)
[OR]
(b) (i) Why ranitidine is a better antacid than magnesium hydroxide? (2)
(ii) What is bakelite? How is it prepared? Give its uses. (3)

(a) (i) 1. Due to maximum intermolecular hydrogen bonding in primary amines (due to presence of more number of H-atoms), primary amines have higher boiling point in comparison to tertiary amines.

2. Aniline does not undergo Friedel-Crafts reaction due to acid-base reaction. Aniline and a Lewis Acid / Protic Acid, which is used in Friedel-crafts reaction.

3. In (CH3)3N there is maximum steric hindrance and least solvation but in (CH3)2NH the solvation is more group; di-methyl amine is still a stronger base than trimethyl amine.

(b) (i) To treat acidity, weak base such as magnesium hydroxide is used. But this weak base make the stomach alkaline and trigger the production of much acid. This treatment only relieves the symptoms and does not control the cause. But ranitine stimulate the secretion of HC1 by activating the receptor in the stomach wall which binds the receptor and inactivate them. So ranitine is a better antacid than magnesium hydroxide.

(ii) 1. Bakelite is a thermo setting plastic. It is prepared from the monomers such as phenol and formaldehyde. The condensation polymerisation take place in the presence of acid or base catalyst. 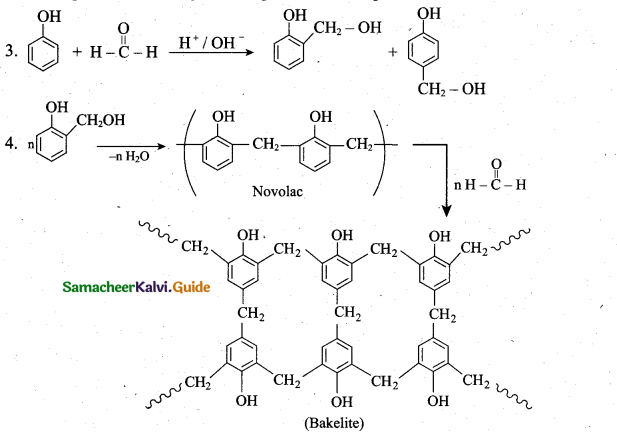