Question 8.
What is the decreasing order of strength of bases?

Question 11.
In the following sequence of reactions,

Question 12.
Of the following, which is the product formed when cyclohexanone undergoe’s aldol condensation followed by heating? 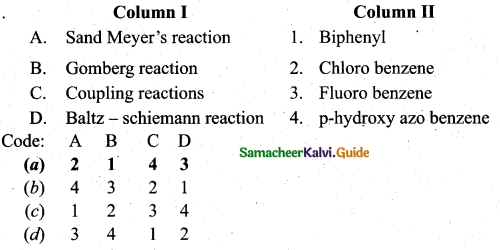 Question 17.
Give the uses of Borax.
Answer:

Question 20.
What are the limitations of Arrhenius concept?
Answer:

Question 23.
Identify compounds A,B and C in the following sequence of reactions.

Question 24.
Why cannot Vitamin C be stored in our body?
Answer:
Vitamin C is water soluble, therefore it is readily excreted in urine and hence cannot be stored in the body.

Question 26.
Discuss the Commercial method to prepare Nitric acid.
[OR]
How will you prepare nitric acid by Ostwald’s process?
Answer:
Nitric acid prepared in large scales using Ostwald’s process. In this method ammonia from Haber’s process is mixed about 10 times of air. This mixture is preheated and passed into the catalyst chamber where they come in contact with platinum gauze. The temperature rises to about 1275 K and the metallic gauze brings about the rapid catalytic oxidation of ammonia resulting in the formation of NO, which then oxidised to nitrogen dioxide.

The nitrogen dioxide produced is passed through a series of adsorption towers. It reacts with water to give nitric acid. Nitric acid formed is bleached by blowing air.

(iv) Isomerisation of cyclopropane to propene 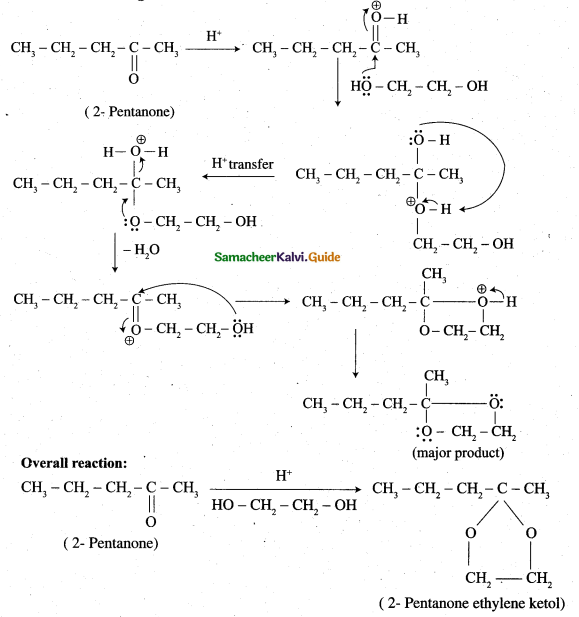 Question 31.
What are the characteristics of adsorption?
Answer:

Question 32.
What are the uses of cellulose?
Answer:

Question 33.
How will you prepare PHBV? Give its use?
Answer:
(i) The biodegrable polymer PHBV (Poly hydroxy butyrate-co hydroxyl valerate) is prepared by the polymerisation of monomers 3 – hydroxy butanoic acid and 3 – hydroxy pentanoic acid.

(ii) It is used in orthopaedic devices and in controlled release of drugs.

(b) (i) Silicon tetrachloride is used in the production of semiconducting silicon.
It is used as a starting material in the synthesis of silica gel, silicic esters, a binder for ceramic materials.

Question 35.
(a) (i) Discuss the manufacture of chlorine. (3)
(ii) What is inert pair effect? (2)
[OR]
(b) (i) Calculate the magnetic moment of Ti3+ and V4+. (2)
(ii) Draw all possible geometrical isomers of the complex [CO(en)2Cl2]+ and identify the optically active isomer. (3)
Answer:
(a) (i) Electrolytic process: When a solution of brine (NaCl) is electrolysed, Na+ and Cl– ions are formed. Na+ ion reacts with OH– ions of water and forms sodium hydroxide.

Hydrogen and chlorine are liberated as gases.

Deacon’s process: In this process a mixture of air and hydrochloric acid is passed up a chamber containing a number of shelves, pumice stones soaked in cuprous chloride are placed. Hot gases at about 723 K are passed through a jacket that surrounds the chamber.

The chlorine obtained by this method is dilute and is employed for the manufacture of bleaching powder. The catalysed reaction is given below,

(ii) In p-block elements, as we go down the group, two electrons present in the valence s-orbital become inert and are not available for bonding (only p-orbital involves chemical bonding). This is called inert pair effect. 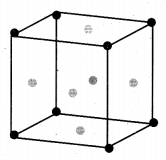 (ii) Nature and state of the reactant:
We know that a chemical reaction involves breaking of certain existing bonds of the reactant and forming new bonds which lead to the product. The net energy involved in this process is dependent on the nature of the reactant and hence the rates are different for different reactants.
Let us compare the following two reactions that we carried out in volumetric analysis.

The physical state of the reactant also plays an important role to influence the rate of reactions. Gas phase reactions are faster as compared to the reactions involving solid or liquid reactants. For example, reaction of sodium metal with iodine vapours is faster than the reaction between solid sodium and solid iodine. Let us consider another example that we carried out in inorganic qualitative analysis of lead salts. If we mix the aqueous solution of colorless potassium iodide with the colorless solution of lead nitrate, precipitation of yellow lead iodide take place instantaneously, whereas if we mix the solid lead nitrate with solid potassium iodide, yellow coloration will appear slowly. 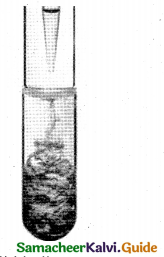 Let us consider the stabilities of the conjugate bases ClO4– , CIO3– , ClO2– and CIO– formed from these acid HClO4, HClO3 , HClO2, HOCl respectively. These anions are stabilized to greater extent, it has lesser attraction for proton and therefore, will behave as weak base. Consequently the corresponding acid will be strongest because weak conjugate base has strong acid and strong conjugate base has weak acid.

The charge stabilization increases in the order, ClO– < ClO–2 < ClO–3 < CIO–4 . This means ClO–4 will have maximum stability and therefore will have minimum attraction for H+. Thus ClO–4 will be weakest base and its conjugate acid HClO4 is the strongest acid.

ClO–4 is the conjugate base of the acid HClO4.

Question 37.
(a) (i) Explain the formation of water with copper catalyst by intermediate compound formation theory. (3)
(ii) O-nitro phenol is slightly soluble in water where as P-nitro phenol is more soluble. Give reason. (2)
[OR]
(b) (i) What happens when the following alkenes are subjected to reductive ozonolysis.
1. propene
2.1-Butene
3. Isobutylene (3)
(ii) What are reducing and non – reducing sugars? (2)
Answer:
(a) (i) Formation of water due to the reaction of H2 and O2 in the presence of Cu can be given as

(b) Explain the mechanism of cleansing action of soaps and detergents.(5)
Answer: 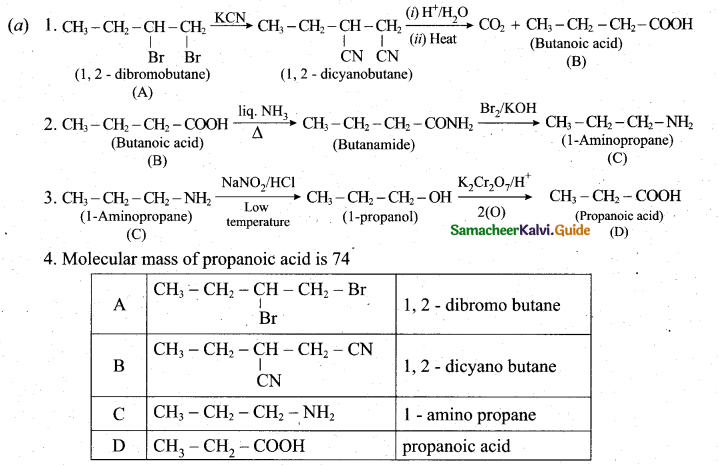 (b) Mechanism of cleansing action of soaps and detergents:

6. The following explains the cleansing action of a soap or detergent on a piece of cloth with a greasy stain: