Students get through the TN Board 11th Bio Botany Important Questions Chapter 2 Plant Kingdom which is useful for their exam preparation.

Question 1.
Define photosynthesis.
Answer:
Plants are unique living entities as they are endowed with the power to harvest the light energy from the sun and to convert it to chemical energy in the form of food through the astounding reaction, photosynthesis.

Question 3.
What do you know about Halophyte algae?
Answer:
Dunaliella salina grows in salt pans (Halophytic algae), which can tolerate high concentration of salt content.

Question 5.
Describe the thallus of red algae.
Answer:
The thallus is multicellular, macroscopic and diverse in form.

Question 6.
What is Garpogohium?
Answer:
The female sex organ of red algae is called carpogonium.

Question 9.
Define the term Solenostele.
Answer:
The stele is perforated at a place or places corresponding to the origin of the leaf trace.

Question 10.
What is meant by Amber?
Answer:
Amber is a plant secretion that is an efficient preservative that doesn’t get degraded and hence can preserve remains of extinct life forms. The amber is produced by Pinites succinifera, a Gymnosperm.

Question 11.
Why do you call some plant fossil plants?
Answer:
The term ’form genera’ is used to name the fossil plants because the whole plant is not recovered as fossils instead organs or parts of the extinct plants are obtained in fragments.

Question 12.
What are the three classes of Gymnosperms?
Answer:

Question 13.
Define the term Gymnosperm.
Answer:
Gymnosperms (Gr. Gymnos = naked; Sperma = seed) are naked seed-producing plants. They were dominant in the Jurassic and cretaceous periods of the Mesozoic era.

Question 16.
List out morphological features of the dicot plant.
Answer:

Question 17.
What do you know about pyrenoids?
Answer:
Storage bodies called pyrenoids are present in the chloroplast and store starch.

Question 18.
What are Epiphytic algae?
Answer:
A few algae grow on the surface of aquatic plants and are called epiphytic algae (Coleochaete, and Rhodymenia).

Question 19.
What are Bryophytes?
Answer:
Bryophytes are the simplest land inhabiting cryptogams and are restricted to moist, shady habitats.
They lack vascular tissue and hence called ‘Non- vascular cryptogams’.

Question 6.
List out any four, characteristic features of pteridophytes.
Answer:

Question 8.
List out any three Economic importance of algae.
Answer:

Sexual reproduction in algae are of three types:

Question 2.
Give an account of Phaeophyceae.
Answer:
The members of this class are called ‘Brown algae’.

Question 4.
Give an account of types of steles.
Answer:
The term stele refers to the central cylinder of vascular tissues consisting of xylem, phloem; pericycle and sometimes medullary rays with pith. There are two types of steles (i) Protostele, (ii) Siphonostele.
Protostele In protostele xylem surrounds phloem. The type includes Haplostele, Actinostele, Plectostele, and mixed protostele. 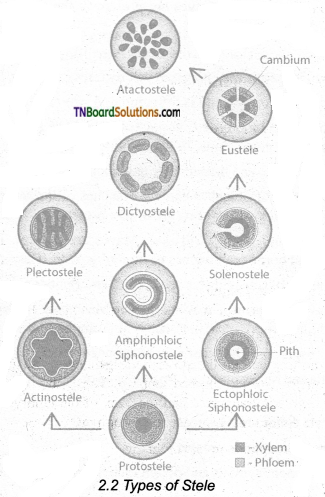 6. Which is the proteinaceous body found is
(a) Pyrenoids
(b) Siliceous walls
(c) Carrageenan
(d) Alginate
Answer:
(a) Pyrenoids

11. In which sporophyte elaters are present and help in dispersal:
(a) Riccia
(b) Anthoceros
(c) Bryopteris
(d) Marchantia
Answer:
(d) Marchantia

12. Who classified bryophytes in to 3 classes.
(a) Proskauer
(b) Kashyap
(c) G.M.Smith
(d) Chamberlain
Answer:
(a) Proskauer

22. Antheridia and Archegonia are sex organs of:
(a) Moss
(b) Mucor
(c) Spirogyra
(d) Puccinia
Answer:
(a) Moss

29. Which of the following is a living fossil?
(a) Spirogyra
(b) Moss
(c) Cycas
(d) Saccharomyces
Answer:
(c) Cycas