Students get through the TN Board 11th Bio Zoology Important Questions Chapter 2 Kingdom Animalia which is useful for their exam preparation.

Question 1.
Define levels of Organization.
Answer:
All members of Kingdom Animalia are metazoans (multicellular animals) and exhibit different patterns of cellular organization. The cells of the metazoans are not capable of independent existence and exhibit division of labour. Among the metazoans, cells may be functionally isolated, or similar kinds of cells may be grouped together to form tissues, organ, and organ systems.

Question 2.
Name the layers of cells found in sponges.
Answer:
In sponges, the outer layer is formed of pinacocytes (plate-like cells that maintain the size and structure of the sponge) and the inner layer is formed of choanocytes. These are flagellated collar cells that create and maintain water flow through the sponge thus facilitating respiratory and digestive functions.

Question 3.
What is the tissue level of Organization?
Answer:
In some animals, cells that perform similar functions are aggregated to form tissues. The cells of a tissue integrate in a highly coordinated fashion to perform a common function, due to the presence of nerve cells and sensory cells. This tissue level of organization is exhibited in diploblastic animals like cnidarians. The formation of tissues is the first step towards the evolution of body plan in animals (Hydra – Coelenterata).

Question 7.
What are diploblastic animals?
Answer:
Animals in which the cells are arranged in two embryonic layers the external ectoderm and internal endoderm are called diploblastic animals. In these animals, the ectoderm gives rise to the epidermis (the outer layer of the body wall) and the endoderm gives rise to the gastrodermis (tissue lining the gut cavity). An undifferentiated layer present between the ectoderm and endoderm is the mesoglea (Corals, Jellyfish, Sea anemone).

Question 9.
What is meant by symmetry?
Answer:
Symmetry is the body arrangement in which parts that lie on the opposite side of an axis are identical. An animal’s body plan results from the animal’s pattern of development.

Question 10.
Define asymmetry for example.
Answer:
The simplest body plan is seen in sponges. They do not display symmetry and are asymmetrical. Such animals lack a definite body plan or are irregular shaped and any plane passing through the center of the body does not divide them into two equal halves (Sponges).

Question 11.
Write about the radial symmetry with a suitable diagram.
Answer:
Symmetrical animals have paired body parts that are arranged on either side of a plane passing through the central axis. When any plane passing through the central axis of the body divides an organism into two identical parts, it is called radial symmetry. Such radially symmetrical animals have a top and bottom side but no dorsal (back) and ventral (abdomen) side, no right and left side. They have a body plan in which the body parts are organized in a circle around an axis. It is the principal symmetry in diploblastic animals. Cnidarians such as sea anemone and corals are radially symmetrical. However, triploblastic animals like echinoderms eg. Starfish have five planes of symmetry and show Pentamerous radial symmetry:

Question 12.
What is bilateral and biradial symmetry? Give examples.
Answer:
Animals that possess two pairs of symmetrical sides are said to be biradially symmetrical. Biradial symmetry is a combination of radial and bilateral symmetry as seen in ctenophores. There are only two planes of symmetry, one through the longitudinal and sagittal axis and the other through the longitudinal and transverse axis. eg. Comb jellyfish – Pleurobrachia.
Animals that have two similar halves on either side of the central plane show bilateral symmetry. It is an advantageous type of symmetry in triploblastic animals, which helps in seeking food, locating mates and escaping from predators more efficiently. Animals that . have dorsal and ventral sides, anterior and posterior ends, right and left sides are bilaterally symmetrical.

Question 14.
What is called coelomates?
Answer:
Eucoelom or true coelom is a fluid-filled cavity that develops within the mesoderm and is lined by mesodermal epithelium called the peritoneum. Such animals with a true body cavity are called coelomates or coelomates.

Question 15.
What is notochord? How the animals are classified based on. this presence or absence of notochord?
Answer:
The notochord is a mesodermally derived rod-like structure formed on the dorsal side during embryonic development in some animals. Based on the presence or absence of notochord, animals are classified as chordates (Cephalochordates, Urochordates, Pisces to Mammalia) and non chordates (Porifera to Hemichordata).

Question 16.
How the kingdom Animalia is classified broadly into sub-kingdoms?
Answer:
The animal kingdom is divided into two sub-kingdoms, the Parazoa and Eumetazoa based on their organization.

Question 17.
Write about the ‘Division level’ Classification of Bilateria.
Answer:
The eumetazoans other than Radiata, show organ level of organization and are bilaterally symmetrical and triploblastic. The grade Bilateria includes two taxonomic levels called Division.
Division: 1. Protostomia (Proto: first; stomium: mouth): Protostomia includes the eumetazoans in which the embryonic blastopore develops into the mouth. This division includes three subdivisions namely acoelomata, pseudocoelomata and schizocoelomata.
Division: 2. Deuterostomia (deuteron: secondary; stomium: mouth):, Eumetazoans in which anus is formed from or near the blastopore and the mouth is formed away from the blastopore.
It includes only one subdivision Enterocoelomata. They have a true coelom called enterocoel, formed from the archenteron.

Question 18.
Write about the special features of the phylum Porifera.
Answer:

Question 19.
Write about the canal system found in Porifera.
Answer:
They possess a water transport system or canal system where water enters through minute pores called Ostia lining the body wall through which the water enters into a central cavity (spongocoel) and goes out through the osculum.
This water transport system is helpful in food gathering, circulation, respiration, and removal of waste.

Question 20.
What is the function of cnidoblasts in phylum Cnidaria?
Answer:
The name Cnidaria is derived from cnidocytes or cnidoblasts with stinging cells or nematocyst on tentacles. Cnidoblasts are used for anchorage, defense, and capturing prey.

Question 23.
What is the type of digestive system found among flatworms?
Answer:
Some of the parasitic flatworms absorb nutrients directly from the host through their body surface. However, flatworms like liver fluke have an incomplete digestive system which means it has an only a single opening to the exterior which serves as both mouth and anus.

Question 24.
List out the characters of the phylum Annelida.
Answer:

Question 25.
Write an account on the common characters of Arthropoda.
Answer:

Question 26.
Define metamerism in Annelids.
Answer:
The body of the annelids are metamerically segmented and the body surface is divided into segment or metameres. Internally the segments are divided from one another by partitions called septa. This phenomenon is known as metamerism.

Question 29.
Write the salient features of the phylum mollusca.
Answer:

Question 30.
Write the functions of the following: (i) Ctenidia, (ii) Ospharidiam.
Answer:

Question 31.
Why ore certain marine animals termed as echinoderms?
Answer:
All Echinoderms are marine animals. These animals have a mesodermal endoskeleton of calcareous ossicles and hence the name Echinodermata.

Question 34.
Give a brief account on the characters of Tunicates.
Answer:
They are exclusively marine and are commonly called sea squirts. Mostly sessile, some pelagic or free swimming, exist as solitary and colonial forms. Body is unsegmented and covered by a test or tunic. Adult forms%re sac like. Coelom is absent, but has an atrial cavity surrounding the pharynx. Notochord is present only in the tail region of the larval stage, hence named urochordata. Alimentary canal is complete and circulatory system is of open type. The heart is ventral and tubular. 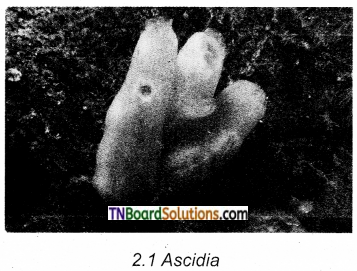 Respiration is through gill slits and clefts. Dorsal tubular nerv e cord is present only in the larval stage and a single dorsal ganglion is present in the adults. Mostly hennaphrodites, development indirect and includes a free swimming tadpole larva with chordate characters. Retrogressive metamorphosis is seen. eg. Ascidia.

Question 35.
Give an account of the General features of subphylum caphalochorelata.
Answer:
Cephalochordates are marine forms, found in shallow waters, leading a burrowing mode of life. They are small fish like coelomate forms with chordate characters such us notochord, dorsal tubular nerve cord and pharyngeal gill slits throughout their life. Closed type of circulatory system is seen without heart. Excretion is by protonephridia. Sexes are separate, Fertilization is external, eg. Branchiostoma.

Question 36.
How are the vertebrates are further divided by divisions? Write the differences between them.
Answer:

Question 37.
What is the special character seen in cyclostomes during spawning?
Answer:
Cyclostomes are marine but migrate to fresh waters for spawning (anadromous migration). After spawning within a few days they die. The larvae (ammocoete) after metamorphosis returns to the ocean.

Question 39.
Write the general characters of amphibians with some examples.
Answer:

Question 40.
What are the general features of Reptilians?
Answer:

Question 42.
Write the general characters of the class mammalia.
Answer:

6. In case of flatworms the specialized excretory cells are named as:
(a) Nematocysts
(b) Flame cells
(c) Nephridia
(d) Malphigian tubules
Answer:
(b) Flame cells

10. ……….. is the largest phylum of the kingdom Animalia.
(a) Annelida
(b) Arthropoda
(c) Aschelminthes
(d) Echinodermata
Answer:
(b) Arthropoda

12. The anterior head region of molluscs has got this organ which helps to test the purity of water:
(a) Ostia
(b) Ospharidiam
(c) Ossicles
(d) Gills
Answer:
(b) Ospharidiam

15. The mantle cavity of the molluscs has got number of feather like gills, which are respiratory and excretory in function are:
(a) Book lungs
(b) Trachea
(c) Ambulacral system
(d) Ctenidia
Answer:
(d) Ctenidia