Question 1.
Explain why atomic and ionic radii increases from lithium to caesium?
Answer:
On moving down the group, there is an increase in the number of shells, as well as increase in nuclear charge. The force of attraction between the nucleus and the added electron decreases. Hence, ionic and atomic radii increases.

Question 4.
What do you understand by the term “hydration enthalpy”? Explain how the hydration enthalpy of alkali metal cations vary in the group.
Answer:
The metal ion, in an aqueous solution gets surrounded by water dipoles in such a way that the cation or an anion is attracted by the opposite end of water dipoles. This process is known as hydration.

This process releases energy. This energy is known as hydration energy or hydration enthalpy.

Question 5.
Lithium salts are more soluble than the other metals of group 1. Explain why?
Answer:
The high solubility of Li salts is due to strong solvation of small size of Li+ ion.

Question 6.
Alkali metals give a characteristics colour for a bunsen flame. Explain why?
Answer:
The heat in the flame excites the valence electron to a higher energy level. When it drops back to its actual energy level, the excess energy is emitted as light, whose wavelength is in the visible region. This appears as a characteristic colour to the particular metal. 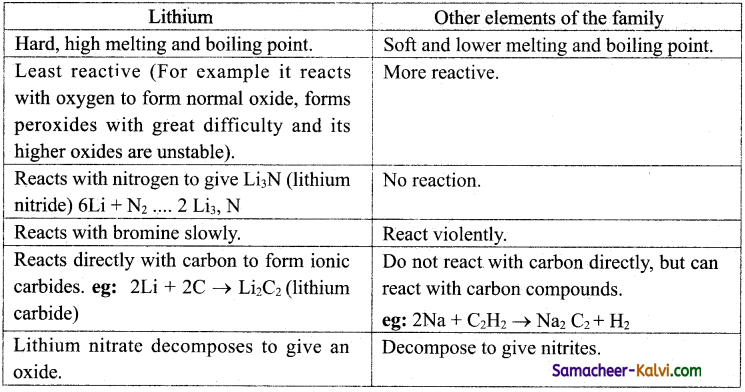 The high reactivity of alkali metals is proved by their reaction with oxygen and halogen which are most electronegative.

Question 10.
Explain the action of alkali metals with oxygen.
Answer:
All the alkali metals on exposure to air or oxygen bum vigorously, forming oxides on their surface. Lithium forms only monoxide, sodium forms the monoxide and peroxide and the other elements form monoxide, peroxide and superoxides. These oxides are basic in nature.

Question 11.
Explain why?
(i) The ionic character of hydrides of alkali metals increase from Li to Cs.
(ii) The stability of hydrides decrease down the group.
(iii) Hydrides behave as strong reducing agents.
Answer:
(i) The electropositive character increases from Li to Cs. Hence their ionic character increases down the group.
(ii) The stability of the hydrides decreases down the group, as the size of the metal ion increases. The M—H bond distance increases with increase in size of metal
ion and it can be readily broken, i.e., the metal hydride is least stable.
(iii) They are powerful reducing agents as M—H bond is weaker and it can be readily broken.

The blue colour of the solution is due to the ammoniated electron which absorbs energy in the visible region of light and thus imparts blue colour to the solution. The solutions are paramagnetic and on standing slowly liberate hydrogen resulting in the formation of an amide.
M+ + e– + NH3 → MNH2 + V2H2

In concentrated solution, the blue colour changes to bronze colour and become diamagnetic.

Question 16.
Mention the uses of sodium.
Answer:
(i) Sodium is used to make Na/Pb alloy needed to make Pb(Et)4 and Pb(Me)4.
(ii) Liquid sodium metal is used as a coolant in fast breeder nuclear reactors.

Question 24.
Explain why lithium carbonate is the least stable among alkali metal carbonates.
Answer:
Li2CO3 is considerably less stable and decomposes readily.
Li2CO3 Li2O + CO2 This is presumably due to large size difference between Li+ and CO23 which makes the crystal lattice unstable.

The ammonia used in this process can be recovered by treating the resultant ammonium chloride solution with calcium hydroxide. Calcium chloride is formed as a by-product.

Question 27.
Mention the uses of sodium carbonate.
Answer:
(i) Sodium carbonate known as washing soda is used heavily for laundering.
(ii) It is an important laboratory reagent used in the qualitative analysis and in volumetric analysis.
(iii) It is also used in water treatment to convert the hard water to soft water.
(iv) It is used in the manufacturing of glass, paper, paint etc…

Question 29.
Mention the uses of sodium chloride.
Answer:
(i) It is used as a common salt or table salt for domestic purpose.
(ii) It is used for the preparation of many inorganic compounds such as NaOH and Na2CO3.

Question 30.
Explain the Castner-Kellner process of manufacturing sodium hydroxide.
Answer:
Sodium hydroxide is prepared commercially by the electrolysis of brine solution in Castner-Kellner cell using a mercury cathode and a carbon anode. Sodium metal is discharged at the cathode and combines with mercury to form sodium amalgam. Chlorine gas is evolved at the anode. The sodium amalgam thus obtained is treated with water to give sodium hydroxide.
At cathode: Na+ + e– → Na(amalgam)
At anode: Cl– → 1/2 Cl2↑ + e–
2Na(amalgam) + 2H2O → 2NaOH + 2Hg + H2↑

Question 33.
Mention the uses of sodium bicarbonate.
Answer:
(i) Primarily used as an ingredient in baking.
(ii) Sodium hydrogen carbonate is a mild antiseptic for skin infections.
(iii) It is also used in fire extinguishers. 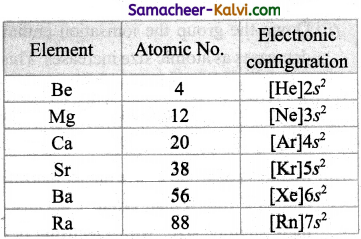 Question 38.
Explain why alkaline earth metals exhibit an oxidation state of +2.
Answer:
The group 2 elements have two electrons in their valence shell and by losing these electrons, they acquire the stable noble gas configuration. So these elements exhibit +2 oxidation state in their compounds.

Question 43.
Account for the characteristic colour produced by the alkaline earth metal salt:: in bunsen flame.
Answer:
The heat in the flame excites the valence electron to a higher energy level, when it drops back to its actual energy level, the excess energy is emitted as light, whose wavelength is in the visible region as shown in the table. 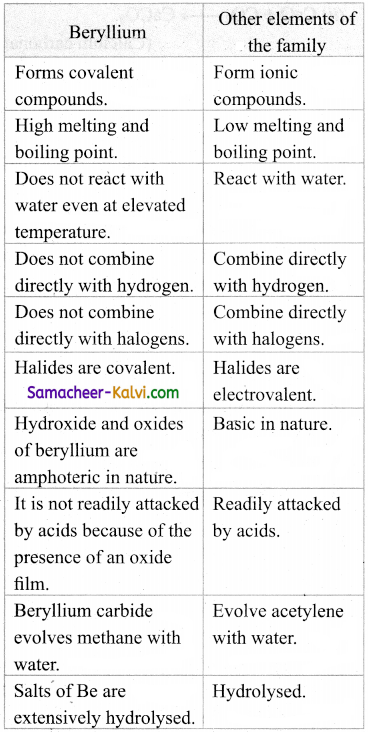 Question 46.
Give methods of preparation of beryllium chloride.
Answer:
Thermal decomposition of (NH4)2BeF4 is the best route for the preparation of BeF2. BeCl2 is conveniently made from the oxide.
BeO + C + Cl2

Question 47.
How is beryllium hydride prepared? Give equation.
Answer:
BeH2 can be prepared by the reaction of BeCl2 with LiAlH4 (Lithium aluminium hydride).
2BeCl2 + LiAlH4 » 2BeH2 + LiCl + AlCl3

Question 52.
Give a brief account of the structure of beryllium chloride.
Answer:

(i) Beryllium chloride has a chain structure in the solid state as shown in structure-(a).
(ii) In the vapour phase BeCl2 tends to form a chloro-bridged dimer in structure-(c).
(iii) Which dissociates into the linear monomer at high temperatures of the order of 1200 K. structure-(b).

Question 54.
Explain why BeSO4 and MgSO4 are readily soluble in water.
Answer:
The greater hydration enthalpies of Be2+ and Mg2+ ions overcome the lattice enthalpy factor and therefore their sulphates are soluble in water.

Question 58.
What is slaked lime? How is it produced?
Answer:
Calcium hydroxide (Ca(OH)2) is called slaked lime. It is formed by the addition of limited amount of water as quick lime.
CaO + H2O → Ca(OH)2

Question 59.
Mention the uses of calcium oxide (CaO).
Answer:
(i) To manufacture cement, mortar and glass.
(ii) In die manufacture of sodium carbonate and slaked lime.
(iii) In the purification of sugar.
(iv) As a drying agent.

Question 63.
Explain the term ‘desert rose’.
Answer:
Gypsum crystals are sometimes found to occur in a form that resembles the petals of a flower. This type of formation is referred to as ‘desert rose’, as they mostly occur in arid areas or desert terrains.

Question 65.
How is plaster of paris’ produced from gypsum? Mention its use.
Answer:
Gypsum is heated to about 300 degree Fahrenheit to produce plaster of Paris, which is also known as gypsum plaster. It is mainly used as a sculpting material.

Question 66.
Explain the use of gypsum in agriculture.
Answer:
It helps loosen up compact or clay soil and provides calcium and sulphur, which are essential for the healthy growth of a plant. It can also be used for removing sodium from soils having excess salinity.

Question 67.
What is ‘dead burnt plaster’? What is use?
Answer:
Anhydrous calcium sulphate formed by heating plaster of Paris above 393 K is known a dead burnt plaster. It has a remarkable property of setting with water. On mixing adequate quantity of water, it forms a plastic mass that gets into a hard solid in 5 to 15 minutes.

Question 68.
Briefly outline the biological importance of calcium and magnesium.
Answer:
(i) Mg is a cofactor of all enzymes that utilise ATP in phosphate transfer and energy release.
(ii) Magnesium is essential for DNA synthesis and is responsible for the stability and proper functioning of DNA.
(iii) Deficiency of magnesium results into, convulsion and neuro muscular irritation.
(iv) Calcium is present in blood and its concentration is maintained by hormones calcitonin and parathyroid hormone.
(v) Deficiency of calcium is blood causes it take to much time to clot and in muscle contraction.

Question 6.
Which of the following has the lowest thermal stability?
(a) Li2CO3
(b) Na2CO3
(c) K2CCO3
(d) Rb2CO3
Answer:
(a) Li2CO3
Hint:
The stability of carbonates increase down the group.

Question 8.
The by-product of Solvay ammonia-process is:
(a) CO2
(b) NH3
(c) CaCl2
(d) CaCO3
Answer:
(c) CaCl2
Hint:
The ammonia used in the process can be recovered by treating the resultant ammonium chloride with calcium hydroxide. Calcium chloride is formed as a by product.

Question 9.
Which of the following metal carbonate is decomposed on heating?
(a) Na2CO3
(b) K2CO3
(c) Li22CO3
(d) MgCO3
Ans :
(d) MgCO3
Hint:
Alkali metal carbonates are stable to heat. The electropositive character increases from Li to Cs. Hence the stability of the carbonates increase in the same order.
CS2CO3 > Rb2CO3 > K2CO3 > Na2CO3 > Li2CO3

Question 16.
The sodium metal is made by electrolysis of molten mixture of 40% NaCl and 60% CaCl2. because:
(a) CaCl2 helps in the conduction of electricity
(b) Ca+2 can reduce NaCl to Na
(c) Ca+2 can displace Na from NaCl
(d) this mixture has a lower melting point than NaCl.
Answer:
Hint:
CaCl2 is added to lower the melting point ofNaCl.

Question 22.
Among the following compounds, a pair of compounds which are insoluble in water is:
(a) LiCl, LiF
(b) NaCl, NaBr
(c) NaBr, KBr
(d) CaCl2, NaCl
Ans :
(a) LiCl, LiF
Hint:
Both are covalent compounds.

Question 25.
Assertion:
K, Rb and Cs form superoxides.
Reason:
The stability of superoxides increases from K+ to Cs+ due to decrease in lattice energy.