Question 1.
Give the characteristics of gases.
Answer:
(i) They assume the volume and shape of their container.
(ii) They are the most compressible state of matter.
(iii) They mix thoroughly when confined to the same container.
(iv) They have much lower densities than liquids and solids.
(v) Their pressure is uniform on all sides of the container.

Question 5.
Describe an experiment to verify Boyle’s law.
Answer:
The schematic of the apparatus used 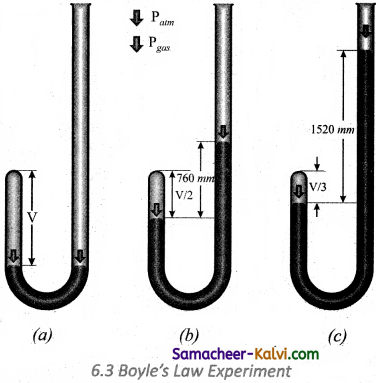 Mercury was added through the open end of the apparatus such that the mercury level on both ends are equal as shown in the figure
(a) Add more amount of mercury until the volume of the trapped air is reduced to half of its original volume as shown in figure
(b) The pressure exerted on the gas by the addition of excess mercury is given by the difference in mercury levels of the tube. Initially the pressure exerted by the gas is equal to 1 atm as the difference in height of the mercury levels is zero.

When the volume is reduced to half, the difference in mercury levels increases to 760 mm. Now the pressure exerted by the gas is equal to 2 atm. It led him to conclude that at a given temperature the volume occupied by a fixed mass of a gas is inversely proportional to its pressure.

Question 6.
Give the graphical representation of Boyle’s law.
Answer:
According to Boyle’s law for a given mass of a gas under two different sets of conditions at constant temperature we can write
P1V1 = P2V2 = k 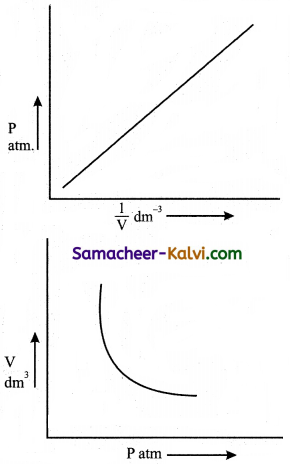 In other words, the density of a gas is directly proportional to pressure.

Question 9.
Explain the variation of volume of a gas with temperature at constant pressure.
Answer:
The plot of the volume of the gas against its temperature at a given pressure is shown in the figure. 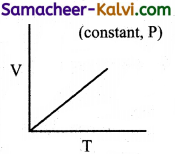 From the graph, it is clear that the volume of the gas linearly increases with temperature at a given pressure. Such lines are called isobars. It can be expressed by the following straight line equation.
V = mT + C where T is the temperature in degree Celsius and m & C are constants.
When T = 0°C the volume becomes V0.
Hence, V0 = C and slope of the straight line m is equal to ∆V / ∆T.
Therefore the above equation can be written in the following form.

Charles found that the coefficient of expansion – is approximately equal to 1/273. It means that at constant temperature for a given mass, for each degree rise in temperature, all gases expand by 1/273 of their volume at 0°C. For refer Figure No. 61.

Question 11.
Explain why airplanes cabins’are pressurized.
Answer:
The pressure decreases with the increase in altitude because there are fewer molecules per unit volume of air. Above 9200 m (30000 ft.) for example, where most commercial air planes fly, the pressure is so low that one could pass out for lack of oxygen. For this reason most airplanes cabins are artificially pressurized.

Question 12.
How does the volume of a gas vary with temperature at constant pressure? Explain with the help of a plot between volume Vs temperature.
Answer: 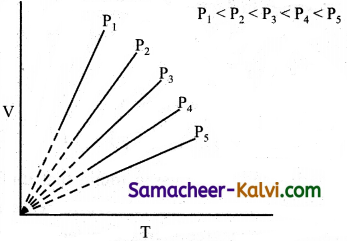 The volume of a gas increases with temperature at constant pressure. Each line (isobar) represents the variation of volume with temperature at certain pressure. The pressure increases from P1 to P.
i.e., P1 < P2 < P3 < P4 < P5.
When these lines are extrapolated of extended to zero volume, they intersect at a temperature of- 273.15°C. All the gases are becoming liquids if they are cooled to sufficiently low temperatures. In other words, all gases occupy zero volume at absolute zero.

Question 13.
What is absolute zero? Mention its significance.
Answer:
Absolute zero is a temperature at which all gases have zero volume. This temperature cannot be obtained. It has a value of -273.15°C and theoretically it is the lowest temperature obtainable.

Question 17.
Describe ideal gas equation.
Answer:
The gaseous state is described completely using the following four variables T, P, V and n. Each gas law, relates one variable of a gaseous sample to another while the other two variables are held constant. Therefore, combining all equations into a single equation will enable to account for the change in any or all of the variables.
Derivation of ideal gas equation from empirical gas laws:
Boyle’s law V ∝ \(\frac{1}{\mathrm{P}}\)
Charles law V ∝ T
Avogadro’s law V ∝ n
We can combine these equations into the following general equation that describes the physical behaviour of all gases.
V ∝ \(\frac{n \mathrm{~T}}{\mathrm{P}}\)

V = \(\frac{n \mathrm{RT}}{\mathrm{P}}\)
where, R is the proportionality constant. The above equation can be rearranged to give
PV = nRT

Question 22.
Mention the application of Dalton’s law.
Answer:
In a reaction involving the collection of gas by downward displacement of water, the pressure of dry vapour collected can be calculated using Dalton’s law.
Pdry gas collected = PTotal – Pwater vapour

Pwater vapour is generally referred as aqueous tension and its values are available for air at various temperatures. These values are relevant in weather forecast.

Question 23.
State Graham’s law of diffusion.
Answer:
The rate of effusion or diffusion of a gas is inversely proportional to the square root of molar mass at constant temperature and pressure.

Question 24.
Define rate of diffusion.
Answer:
It is defined as the number of molecules of a gas that get diffused in unit time.
Rate of diffusion = \(\frac{\text { Volume of the gas diffused }}{\text { time taken }}\)

rA and rB rates of diffusion of gases A and B and the MA and MB are their molecular weighs.

Where rA and rB are the rates of diffusion of A and B and the MA and MB are their respective molecular masses.

Question 29.
What are the observations that you get from the plot of Z Vs P. (PV / RT Vs P) for real gases?
Answer: 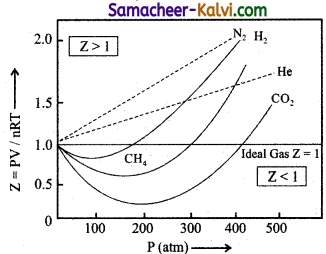 Question 30.
Explain why in the case of a real gas the measured pressure is lower than the pressure of the gas if it behaved ideally.
Answer:
The speed of a’molecule that is moving toward the wall of a container is reduced by the attractive forces exerted by its neighbouring molecules. Hence, the measured gas pressure is lower than the pressure the gas would exert, if it behaved ideally.

Question 31.
What is compressibility factor? How does it explain the deviation of non-ideal gases from ideal behaviour.
Answer:
Compressibility factor is the ratio of PV to nRT.
Z = \(\frac{\mathrm{PV}}{n \mathrm{RT}}\)
For ideal gases PV = nRT i.e., Z = 1
At high pressures Z > 1 (Positive deviation)
At intermediate pressures Z < 1 (Negative deviation) Question 32. Explain the term ‘Boyle’s point’. Mention it significance. Answer: (i) Boyle’s point is the temperature at which, real gases behave ideally over a range of low pressures. (ii) The Boyle point varies with the nature of the gas. (iii) Above the Boyle point, Z > 1 for real gases, i.e., they show positive deviation.
(iv) Below the Boyle point, the real gases first show a decrease for Z, reaches a minimum and then increase with increase in pressure. 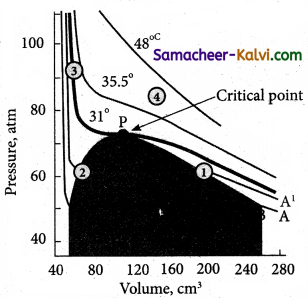 At 13° C, carbondioxides exists as a gas at point A. Increasing the pressure of the gas decreases its volume to the point B. The volume of carbondioxide remains constant, till the point C. At the point B, carbon dioxide gets converted to liquid carbondioxide.

Along the line BC, carbondioxide exists both as vapour and liquid. They are in equilibrium with each other. At point ‘C’, carbondioxide is completely converted to liquid. Further increase of pressure at point ‘C’ has very little effect on the volume of carbondioxide. This is reflected in the steep rise in the curve.

Question 38.
Which of the gases can be liquefied by Joule Thomson effect?
Answer:
Gases like O2, He, N2 and H2 have very low Tc, hence Joule-Thomson effect can be applied for cooling effectively for liquefaction.

Question 40.
Mention different methods of liquefaction of gases.There are different methods used for liquefaction of gases.
Answer:
(i) In Linde’s method: Joule-Thomson effect is used to get liquid air or any other gas.
(ii) Claude’s process: In addition to Joule- Thomson effect, the gas is allowed to perform mechanical work. So that more cooling is produced.
(iii) Adiabatic process: This method of cooling is produced by removing the magnetic property of magnetic material such as gadolinium sulphate. By this method, a temperature of 10-4 K i.e., as low as zero Kelvin can be achieved.

Question 42.
An inflated balloon has a volume of 275 mL and contains 0.120 mole of air. As shown in fig a piece of dry ice weighing lg is placed in the balloon and its neck is tied. What is the volume of the balloon after dry ice (solid CO2) has vapourized? Assume pressure and temperature to remain constant.
Answer: 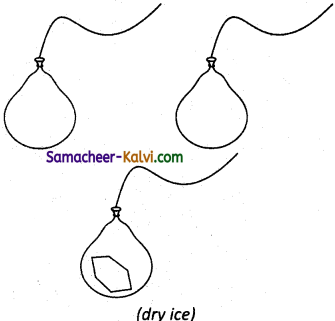 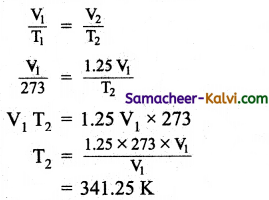 Question 50.
In an experiment of verification of Charle’s law, the following are the set of readings taken by a student. 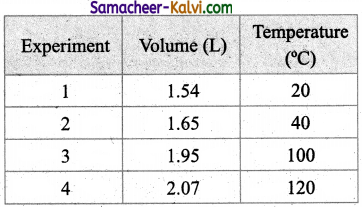 What is the average value of the constant of proportionality?
Answer: 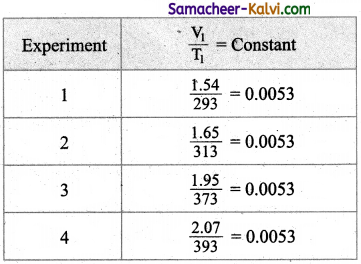 Question 51.
Pressure of 1 g of an ideal gas at 27°C is found to be 2 bar. When 2 g of another ideal gas B is -introduced in the same flash at ike same temperature, the pressure becomes 3 bar. Find the relationship between their molar masses.
Answer:
Let the molar masses of gases A and B are MA and MB respectively. Then their number of moles will be,
nA = \(\frac{1}{\mathrm{M}_{\mathrm{A}}}\);

Question 60.
A balloon filled with air at room temperature and cooled to a much lower temperature can be used as a model for Charle’s law.
Answer:
The volume of air decreases as the temperature is lowered, i.e., its density increases. Thus a cooled air is heavier than atmospheric air. (The reverse fact is in made use of in filling hot air in the balloon which use up for meterological observations).

Question 2.
Which of the following diagram directly describes the behaviour of a fixed mass of an ideal gas?
(a)

Question 12.
The Vander waal’s constant ‘a’ for different gases are given below: 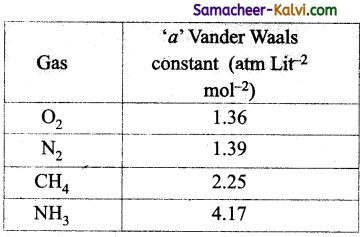 Question 19.
The isotherm obtained for CO is as follows: 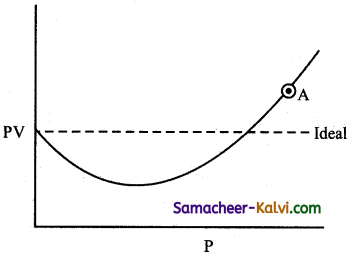 Question 22.
From the following plots, identify the one which is not related to the other plots.
(a)

Hint:
These plots shows the verification of Boyle’s law. The correct answer for (d) is T3 > T2 > T1. 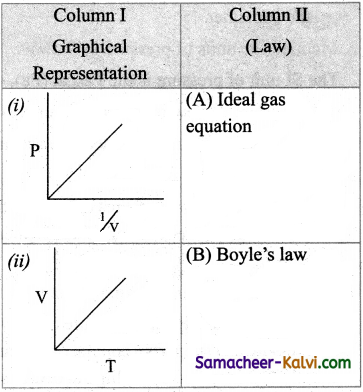 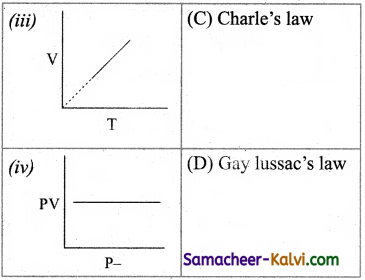