Students get through the TN Board 12th Chemistry Important Questions Chapter 15 Chemistry in Everyday Life which is useful for their exam preparation.

Question 1.
Define the term chemotherapy.
Answer:
The specific treatment of a disease by using medicine is known as chemotherapy.

Question 4.
Give examples of drugs that are grouped based on the biological effect that they produce on the recipient.
Answer:

Question 5.
Streptomycin and erythromycin are classified in the same group. Justify the statement.
Answer:
Both inhibit the protein synthesis (target process) in bacteria and are classified in the same group. However, the mode of action is different. Streptomycin inhibits the initiation of protein synthesis while erythromycin prevents the incorporation of new amino acids to the protein. These drugs are grouped based on the biological system/process that targets the recipient.

Question 6.
Write a short note on enzymes as drug targets.
Answer:
In all living systems, the biochemical reactions are catalysed by enzymes. Hence, these enzyme actions are highly essential for the normal functioning of the system. If their normal enzyme activity is inhibited, then the system will be affected. This principle is usually applied to kill many pathogens.
In enzyme catalysed reactions, the substrate molecule binds to the active site of the enzyme by means of the weak interaction such as hydrogen bonding, Van der waals force etc., between the amino acids present in the active site and the substrate.
When a drug molecule that has a similar geometry (shape)as the substrate is administered, it can also bind to the enzyme and inhibit its activity. In other words, the drug acts as an inhibitor to the enzyme catalyst. These types of inhibitors are often called competitive inhibitors.
In certain enzymes, the inhibitor molecule binds to a different binding site, which is commonly referred to as an allosteric site and causes a change in its active site geometry (shape). As a result, the substrate cannot bind to the enzyme. These types of inhibitors are called allosteric inhibitors.

Question 8.
How do drugs interact with enzymes? (or) Give a brief account of drug-enzyme interaction.
Answer:
Drugs that inhibit any two of the activities mentioned in Q7 are called enzyme inhibitors. Enzyme inhibitors can block the binding site thereby preventing the binding of the substrate to the active site and hence inhibit the catalytic activity of enzymes.
Drugs inhibit the attachment of natural substrate on active site in two ways:

This binding of the drug (inhibitor) at the allosteric site changes the shape of the active site of the enzyme in such a way that the natural substrate cannot recognize it. Such enzymes are called noncompetitive inhibitors.
If the bond between an enzyme and the drug (inhibitor) is a strong covalent bond that cannot be broken easily then the enzyme is blocked permanently. The body then degrades the enzyme-drug (inhibitor) complex and synthesis the new enzyme.

Question 12.
With reference to which classification has the statement “ranitidine, is an antacid” been given?
Answer:
This statement refers to the classification of drugs according to pharmacological effect because drugs that will be used to counteract the excess acid in the stomach will be called antacids.

Question 13.
List two major classes of antibiotics with an example of each class.
Answer:

Question 14.
What are tranquilizers? How do they act? Give two examples.
Answer:
Tranquilizers are neurologically active drugs. They are used in the treatment of stress anxiety, sleep disorders, and mental diseases. They act on the central nervous system by blocking the neurotransmitter dopamine in the main Dizephan, alprazolam is the examples.

Question 20.
Give examples of antacids. How do antacids function in case of acidity?
Answer:
Milk of magnesia, sodium bicarbonate, aluminum hydroxide, ranitidine, cimetidine, omeprazole, rabeprazole are examples of antacid. They neutralize the acid in the stomach that causes acidity.

Question 21.
What are antihistamines? Give two examples.
Answer:
Antihistamines are drugs that provide relief to allergic effects, eg: cetirizine, levocetirizine.

Question 22.
What are antimicrobials? Give two examples.
Answer:
Drugs that are used to cure diseases caused by microbes or microorganisms such as bacteria, viruses, fungi, etc are called antimicrobials. These include antibacterials, antifungal, and viral agents.
eg: penicillin, erythromycin.

Question 28.
What are aminoglycosides? Give examples.
Answer:
Aminoglycosides are a type of antibiotics that bind to the 30S subunit of the bacterial ribosome, thus stopping bacteria from making proteins.
eg: kanamycin, gentamycin neomycin.

Question 31.
Name the preservative used in the preparation of pickles and vegetables.
Answer:

Question 33.
Name the physical methods used in the preservative of food.
Answer:

Question 34.
What are antioxidants? Give examples.
Answer:
Antioxidants are substances that retard the oxidative deteriorations of food. Food containing fats and oils is easily oxidized and turns rancid. To prevent the oxidation of the fats and oils, chemical BHT(butylhydroxytoluene), BHA(Butylated hydroxyanisole) are added as food additives. They are generally called antioxidants.

Question 36.
Define “Total Fatty Matter (TFM). What is its use?
Answer:
It is defined as the total amount of fatty matter that can be separated from a sample after splitting with mineral acids. The higher the TFM quantity in the soap better is its quality.

Question 37.
What is an anionic detergent?
Answer:
Anionic detergent: They are so named because a large part of their molecules are anions and it is the anionic part of the molecule is involved in the cleansing actions. These are sodium salts of sulphonated long-chain alcohols or hydrocarbon. For example, sodium lauryl sulphate, sodium dodecyl benzene sulphonate, etc. Anionic detergents are used is household work and in toothpastes.

Question 39.
What is Non-ionic detergent?
Answer:
Non- ionic detergents: These detergents do not contain any ion. These are esters of high molecular weight alcohols. One such detergent is formed when stearic acid reacts with polyethylene glycol. Liquid dishwashing detergent are nonionic type.

Question 40.
Explain the terms monomer and polymer and polymerization.
Answer:
Monomer: Simple and reactive molecules from which polymers are prepared either by addition or condensation are called monomers, eg: Vinyl chloride, ethene, formaldehyde, acrylonitrile, phenol, etc.
Polymers: These are compounds of high molecular mass formed by the combination of a large number of simple molecules called monomers. The process by which monomers are converted to polymers is called polymerization.

Question 43.
Write names of monomers of the following polymers and classify them as addition or condensation polymers.
(a) Teflon, (b) Bakelite, (c) Natural rubber
Answer:

Question 46.
Write the structure of the monomers of the following polymers, (i) PVC, (ii) Polypropene, (iii) PAN, (iv) Nylon – 6.
Answer: 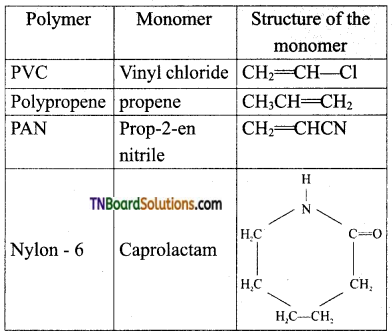 Question 48.
Write the names of the structure of monomers of the following polymers, (i) Buna – S, (ii) Neoprene.
Answer:

Question 49.
What is the repeating unit in the condensation polymer by combining HOOC—CH2—CFE —COOH (succinic acid) and H2NCH2CH2NH2 (ethylenediamine).
Answer:

Question 50.
Differentiate between molecular structure and behavior of thermoplastic and thermosetting plastic. Give one example of each type.
Answer:

Question 52.
Name a synthetic polymer that is an amide.
Answer:
Nylon 6, 6. 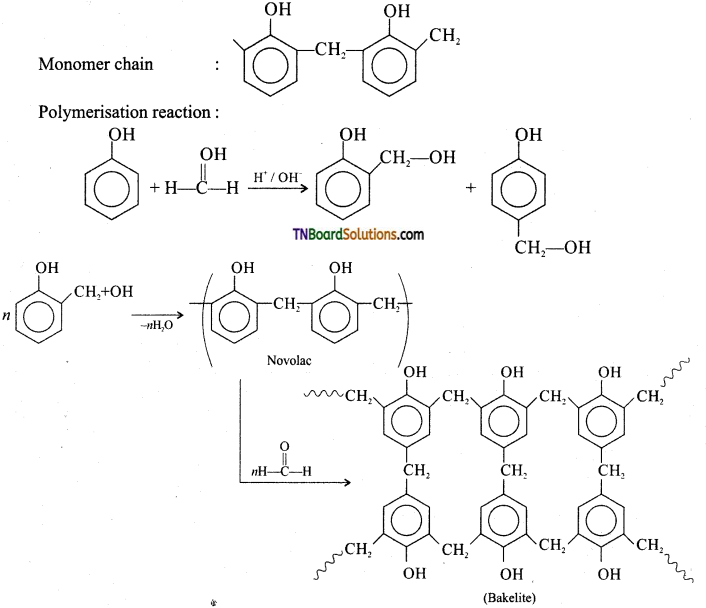 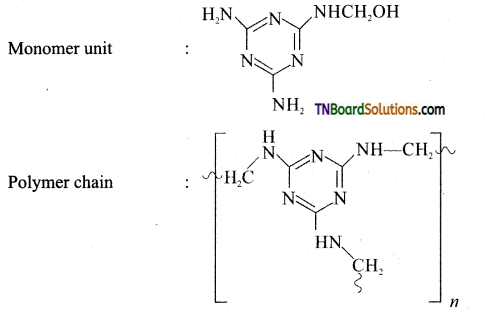 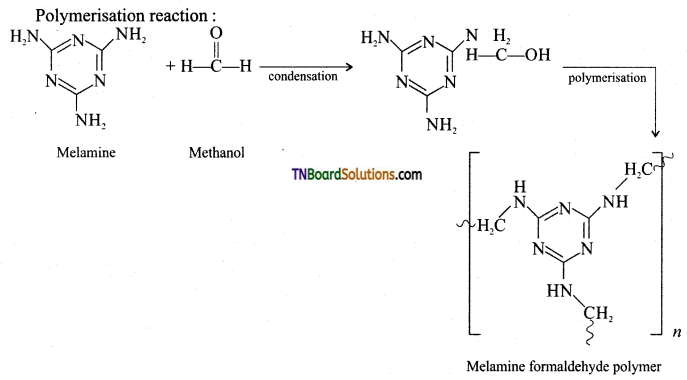 Uses: It is used for making unbreakable crockery.

Question 60.
How is urea-formaldehyde prepared?
Answer:
It is formed by the condensation polymerization of the monomers urea and formaldehyde. 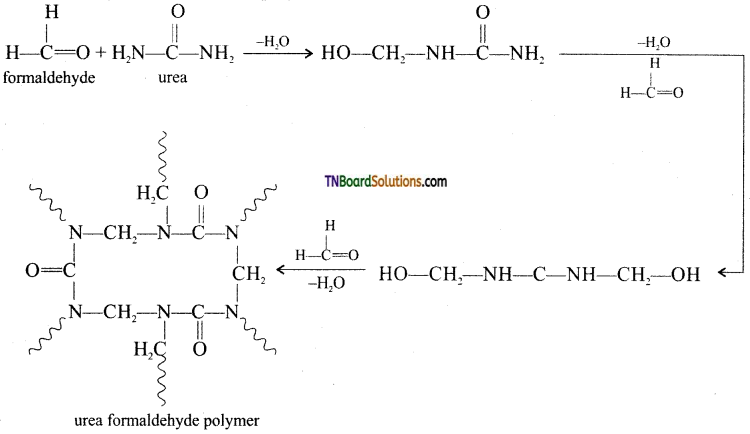 Question 61.
How is PHBV prepared? Give equation mention its uses.
Answer:
It is the co-polymer of the monomers 3-hydroxybutyric acid and 3-hydroxypentanoic acid. In PHBV, the monomer units are joined by ester linkages.

Question 62.
Identify the type of polymer where A and B are monomers.
—A—B—B—A—A—A— B—A.
Answer:
Co-polymer.

Question 64.
Give a brief account of vulcanization of rubber.
Answer:
Vulcanization is heating natural rubber with sulphur and an appropriate additive to improve its physical properties. On vulcanization sulfur forms cross-links at the reactive sites of the double bond and thus rubber gets stiffened. 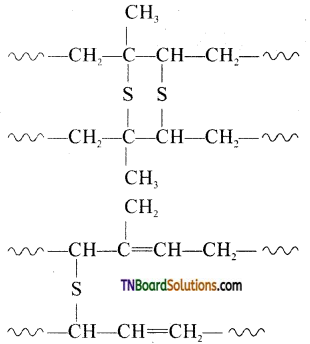 In this process, cross-linking of cis 1,4 polyisoprene chains through disulfide (—S—S) bond occurs.

Question 65.
Describe the preparation of neoprene and mention its uses.
Answer:
Neoprene is formed by the free radical polymerization of the monomer, 2-chloro buta-1,3 diene(chloroprene).

It is used is the manufacture of chemical containers and conveyor belts.

Question 67.
What type of polymer Buna-S is? Give its method of preparation.
Answer:
Preparation of Buna-S:
It is a copolymer. It is obtained by the polymerization of buta-1,3-diene and styrene in the ratio 3:1 in the presence of sodium. 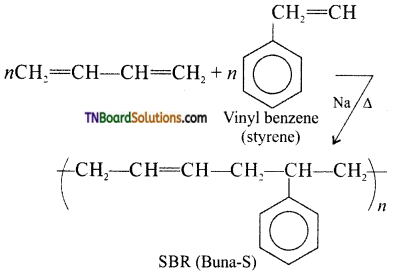 1. Which one of the following antacids is an antihistamine?
(a) Ranitidine
(b) Lansoprazole
(c) Terfen adine
(d) Luminal
Answer:
(a)

2. Which of the following is / are nurologically active drug?
(a) Aspirin
(b) Phenelzine
(c) Heroin
(d) all the above
Answer:
(d)

5. Which of the following statements is not correct?
(a) Some antiseptics can be added to soap.
(b) Dilute solutions of disinfectants can be used as antiseptic.
(c) Disinfectants are antimicrobial drugs.
(d) Antiseptic medicine can be infected.
Answer:
(d)

7. A compound that causes general anti¬depressant action on the central nervous system belongs to the class of:
(a) analgesics
(b) tranquilizers
(c) narcotic analgesics
(d) antihistamines
Answer:
(b)

9. Glycerol is added to soap. Its function is:
(a) as a filler
(b) to increase lathering
(c) to prevent rapid drying
(d) to make soap granules
Answer:
(c)

11. Which of the following is employed as anti-histamine?
(a) Omeprazole
(b) Chloroampinicol
(c) Diphenylhydramine
(d) Norethindrone
Answer:
(c)

13. Which among the following is not an antibiotic?
(a) Penicillin
(b) Oxytocin
(c) Erythromycin
(d) Tetracyclin
Answer:
(b)

15. Which of the following is not an antimicrobial?
(a) Salvarsan
(b) Sulphanilamide
(c) Prontsil
(d) Paracetamol
Answer:
(d)

16. Which of the following is not a semi synthetic polymer?
(a) Cis poly isoprene
(b) Cellulose nitrate
(c) Cellulose acetate
(d) Vulcanised rubber
Answer:
(a)

17. Which of the following polymers is prepared by condensation polymerisation?
(a) Styrene
(b) Nylon 6,6
(c) Teflon
(d) Rubber
Answer:
(b)

18. Which of the following is a chain growth polymer?
(a) Starch
(b) Nucleic acid
(c) Polystyrene
(d) Proteins
Answer:
(c)

20. Which one of the following is a copolymer formed by condensation polymerisation?
(a) Terelene
(b) Buna – S
(c) Buna – N
(d) Neoprene
Answer:
(a)

22. Which of the following statements is not true?
(a) B una – S is a copolymer of butadiene and styrene.
(b) Natural rubber is a 1,4-polymer of isoprene.
(c) In vulcanisation the formation of sulphur bridges between different chains makes rubber harder and stronger.
(d) Natural rubber has trans configuration at every double bond.
Answer:
(d)