Question 1.
Define National Income.
Answer:
“The labour and capital of a country acting on its natural resources produce annually a certain net aggregate of commodities, material and immaterial including services of all kinds. This is the true net annual income or revenue of the country or national dividend”. – Alfred Marshall.
(or)
“The net output of the commodities and services flowing during the year from the country’s productive system into the hands of the ultimate consumers or into net addition to the country’s stock of capital goods – Simon Kuznets.

Question 3.
What is the difference between NNP and NDP?
Answer:

Question 4.
Trace the relationship between GNP and NNP.
Answer:
GNP is the total measure of the flow of final goods and services at market value resulting from current production in a country during a year, including net income from abroad, where as NNP is the net output of the economy during the year.

Question 5.
What do you mean by the term ‘Personal Income’?
Answer:
Personal Income is the Total Income received by the Individuals before paying direct Taxes from all sources. It also includes Transfer Payments.

Question 6.
Define GDP deflator.
Answer:
It is an index of price changes of goods and services included in GDP.

Question 7.
Why is self consumption difficult in measuring national income?
Answer:
Measuring of National Income through product method is done by measuring the final goods and services. But farmers keep a large portion of food and other goods for self consumption. So, the unsold product remains undecided as whether to include or not

Question 8.
Write a short note on per capita income.
Answer:
Per Capita Income is an annual average Income of a person. It is income per head of population. Its the average income of person of a country in a particular year.

Question 10.
Explain briefly NNP at factor cost.
Answer:
It is the cost of total income of payment made to the factors of production. The amount of indirect taxes are deducted and subsidies are added to the money value of NNP at market price to arrive at the NNP FC.
NNP at factor cost = NNP at Market prices – Indirect taxes + Subsidies.

Question 13.
Write briefly about national income and welfare.
Answer:
National income is an indicator of the country’s Economic progress when the country’s GDP increases, then there is increase in standard of living of the people. But the rise in GDP need not always promote economic welfare because welfare is affected by a wide range of factors like economic and .non-economic factors.

Question 14.
List out the uses of national income.
Answer:

Question 15.
Explain the importance of national income.
Answer:
(i) National Income is known as the accounts of the economy. It helps to facilitate the task of measurement as it provides a set of procedures and techniques for measurement of income and output of aggregate level.

(ii) National Income provides:
(a) Model of Macro Economic Model and
(b) Enable us to learn few hall mark numbers which help characterize the economy.

(iii) Gives relative importance of the various sectors of the economy. It also enables us to know how income is produced, distributed, saved and spent.
(iv) It indicates performance of the Economy, Structural changes in the Economy, making comparison among Nations.
(v) The National Income data helps to formulate National Policies like monetary and Fiscal policies. It also helps to. build economic models.
(vi) It helps to formulate planning and evaluate progress, to know the distribution of income for various factors of production.
(vii) It enables us to arrive at Macro-economic variables namely Tax – GDP ratio, Current Account Deficit – GDP ratio etc.
(viii) It enables us to know a country’s per capita income which reflects the economic welfare of the country.
(ix) It is helpful to UNO which formulates welfare plans for different countries especially for underdeveloped countries.
(x) National Income data is manifestation of material results of human activity in an economy.

Question 16.
Discuss the various methods of estimating the national income of a country.
Answer:
All goods and services produced in the country must be counted and converted against money value during a year. Whatever is produced is used for consumption or saved. There are three methods that are used to measure National Income.
(i) Production or Value Added Method
(ii) Income or Factor Earning Method (Hi) Expenditure Method
The three methods originate from three different phases in circular flow of National Income.

National income may be measured by any method, the equation is
Output = income = expenditure

GDP: By sum of spending, Factor incomes or output in all methods, net flow of goods and services which is being looked at from three different angles. Each method provides different view of the economy and also provides a check in the accuracy of the other methods. 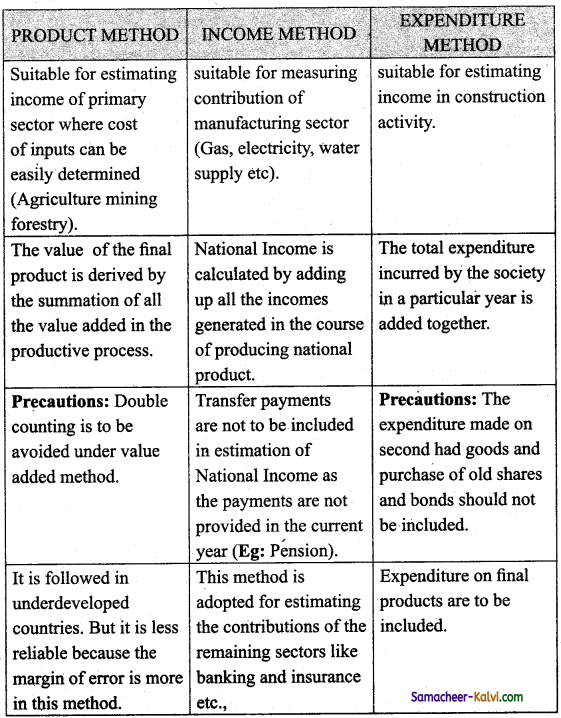 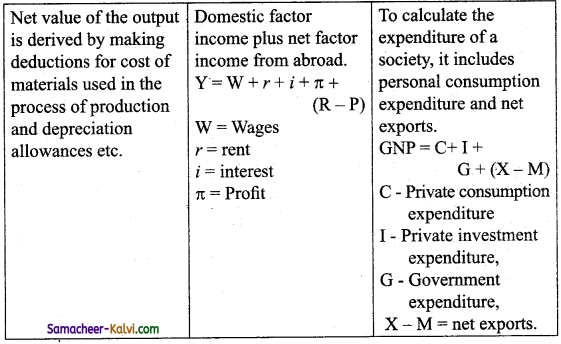 Question 17.
What are the difficulties involved in the measurement of national income?
Answer:
In India, because of unorganized and non-monetized subsistence sector where the barter system still prevails for transacting goods and services. So proper valuation of output is very difficult.
Difficulties:
(i) Transfer payments:
The government expenditures are not included in National Income because they are paid without adding anything to the production process.

(iii) Unpaid services:
There are no. of goods and services which are difficult to be assessed in money terms.
Eg: services of house wife;

(v) Production for self-consumption and changing price:
Farmers keep a large portion of food and other goods produced on the farm for self consumption and that is not included in the National Income.

National Income estimate in India are not accurate because of difficulties faced at different levels.

(iii) Government sector:
The economic transactions of public bodies at all levels. The main function of the government is to provide social goods like defence, education etc.

(iv) Rest of the world sector:
It is international economic transactions of the country.

(v) Capital sector is saving and investment activities like transactions of banks, insurance etc. these agencies provide financial assistance to the firms activities.

When the sectoral contribution are assessed to GDP, the economy is divided into primary, secondary and tertiary sectors.

Social accounting method is important for economic analysis because it represents the major economic flows and statistical relationships among .various sectors of economic system and it is useful to forecast the trends of economy more accurately.

Question 4.
Income method is measured by summing up of all forms of:
(a) Revenue
(b) Taxes
(c) Expenditure
(d) Income
Answer:
(d) Income

Question 8.
National income is a measure of the ________ performance of an economy.
(a) Industrial
(b) Agricultural
(c) Economic
(d) Consumption
Answer:
(c) Economic

→ Depreciation: Fall in value of fixed assets due to normal wear and tear and foreseen obsolescene.

→ Intermediate products: Goods and services purchased by one unit from another, used or resold during the same year.

→ COE: Total remuneration in cash and in the form of social security contributions by employers to their employees.

→ Royalty: Amount payable to the landlord for granting the leasing rights of subsoil assets.

→ GFCE: Expenditure incurred by general government on producing free services to the people.

→ GDCF: Addition to the stock of capital undertaken by the production units located within economic or domestic territory of the country.

→ Personal Disposable Income: Sum of factor and non-factor incomes occurring to the households after payment of direct taxes.

→ Private Income: Sum of factor and non-factor incomes before payment of direct-taxes occurring to houselholds.

→ GDP: Gross Domestic Product – Aggregate value of goods and services produced within the domestic territory of a country.

→ Gross Fiscal Deficit: The excess of total government expenditure over revenue receipts and capital receipts that do not create debt.

→ National Disposable Income: Net National Product at Market Price + other Current Transfers from the rest of the world.

→ Net Domestic Product (NDP): Aggregate value of goods and services produced within the domestic territory of a country which does not include the depreciation of capital stock. 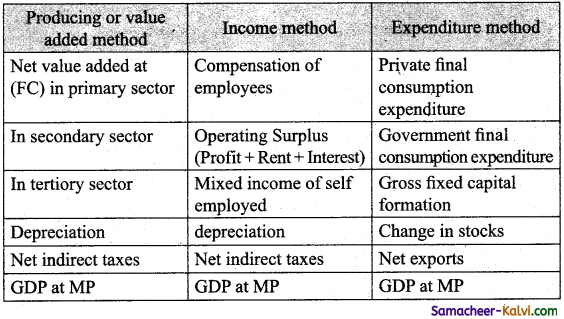