Question 1.
Why did Thomson’s atomic model fail?
Answer:
Thomson model failed to explain the scattering of α-particles through large angles in Rutherford’s experiment.

Question 4.
Why is electron revolving round the nucleus of an atom?
Answer:
If the electrons were stationary, they would fall into the nucleus due to the electrostatic attraction and the atom would be unstable.

Question 17.
The half-life period of a radioactive substance is 60 days. What is the time taken for(\(\frac{3}{4}\))th of its original mass to disintegrate?
Answer:

Question 18.
A radioactive nucleus A undergoes a series of decays according to the following scheme.

Question 24.
What is the use of a control rod in the reactor? Mention any two control rods.
Answer:
Control rods are used to control the chain reactions. They are good absorbers of neutrons. Eg: Boron, Cadmium.

Question 25.
(a) The energy levels of an atom are as shown below. Which of them will result in the transition of a photon of wavelength 275 nm? 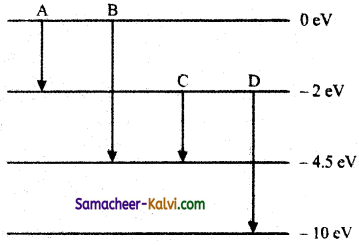 (b) Which transition corresponds to emission of radiation of (i) maximum wavelength and (ii) minimum wavelength.
Answer:
(a) The energy E of a photon of wavelength 275 nm is given by
E = \(\frac{h c}{\lambda}\)

Question 26.
Find the relation between the three wavelength λ1, λ2 and λ3 from the energy level diagram shown below: 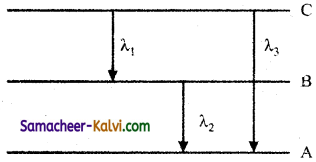 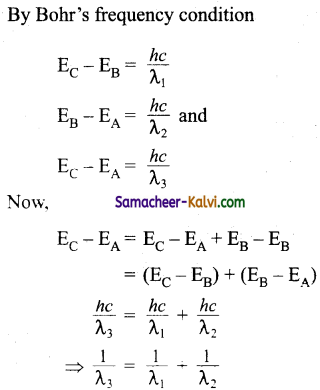 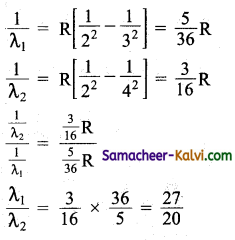 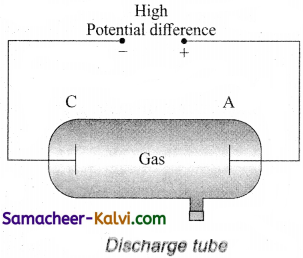 When the pressure reaches to around 0.1 mm of Hg, positive column disappears. At this time, a dark space is formed between anode and cathode which is often called crooke’s dark space and the walls of the tube appear with green colour. At this stage, some invisible rays emanates from cathode called cathode rays, which are later found be a beam of electrons.

Question 36.
Describe Thomson’s model of an atom. Why was this model discarded later on?
Answer:
J.J. Thomson proposed that an atom is a sphere is a sphere of positively charged matter with electrons embedded in it. The j positive charge is uniformly distributed over the entire atom. The arrangement of electrons inside the continuous positive charge is similar to that of the seeds in a watermelon or the plums in a pudding.

The electrons are arranged in such a manner that their mutual repulsions are balanced by their attractions with the positively charged matter. Thus the atom as a whole is stable and neutral.

Thomson’s model was able to explain with some success the process like chemical reaction and radioactive disintegration. According to this model, all the charges are assumed to be at rest. But from classical electrodynamics, no stable equilibrium points exist in electrostatic configuration and hence such an atom cannot be stable. 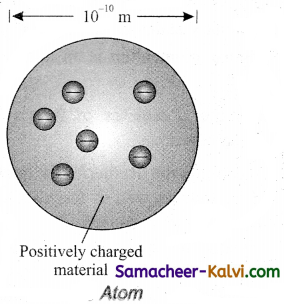 Failure of Thomsons model:
(i) It could not explain the origin of several spectral series in the case of hydrogen and other atoms.
(ii) It failed to explain the large angle scattering of a-particles in Rutherford’s experiment.

Question 37.
Describe Rutherford’s experiment on the scattering of a-partieie by a nucleus. Ext fain the observations and conclusions of the experiment.
Answer:
Experimental arrangement:
A schematic arrangement of the Geiger – Marsden experiment is shown in figure. 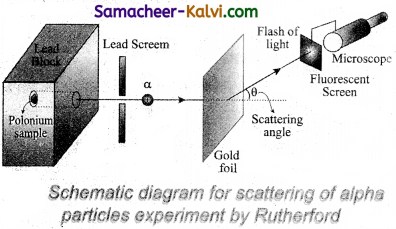 A radioactive source of a-particles polonium is enclosed in thick lead block, provided with a narrow opening. The a-particles from this source are collimated into a narrow beam through a narrow slit. The beam is allowed to fall on a thin gold foil of thickness 2.1 × 10-7 m. The ∝-particles scattered in different directions are observed with the help of a rotatable detector which consists of a zinc sulphide screen and a microscope.

Whenever an a-particle strikes the screen, it produces a tiny flash or scintillation, which is viewed through the microscope. In this way, the number of ∝-particles scattered at different angles can be counted. The whole apparatus is enclosed in an evacuated chamber to avoid scattering of a-particles by air molecules. 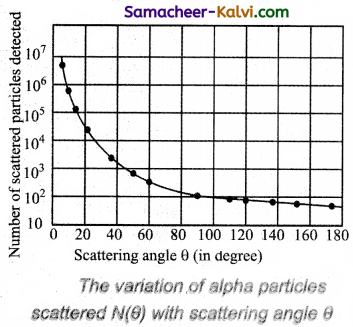 Observations:
As shown in figure, a graph is drawn between the scattering angle θ and the number N (θ) of the a-particles scattered at angle θ, for a very large number of a-particles. The dotted points are the alpha scattering experiment data points obtained by Geiger and Marsden and the solid curve is the prediction from Rutherford’s nuclear model. It is observed that the Rutherford’s nuclear model is in good agreement with the experimental data. 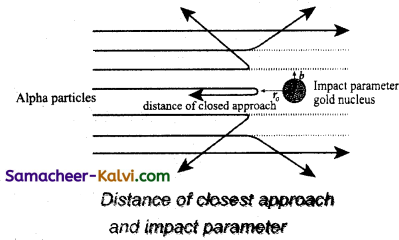 Significance of the result:
Rutherford concluded the following important falls about an atom.
(i) As most of the α-particles pass straight through the foil, so most of the space within atoms must be empty.
(ii) To explain large angle scattering of α-particles, Rutherford suggested that all the positive charge and the mass of the atom is concentrated in a very small region, called the nucleus of the atom.
(iii) The nucleus is surrounded by a cloud of electrons whose total negative charge is equal to the total positive charge on the nucleus so that the atom as a whole is electrically neutral.

Question 38.
Obtain Bohr’s quantisation condition on the basis of the wave picture of an electron.
Answer:
Consider -the motion of an electron in a circular orbit of radius r around the nucleus of the atom. According to de Broglie hypothesis, this electron is also associated with wave character.

Hence a circular orbit can be taken to be a stationary energy state only if it contains an integral number of de- Broglie wavelength.

This is the famous Bohr’s quantisation condition for angular momentum. Thus only those circular orbits can be the allowed stationary states of an electron in which its angular momentum is an integral multiples of \(\frac{h}{2 \pi}\)

Question 39.
State the postulates of Bohr’s theory of hydrogen atom.
Answer:
Accepting the Rutherford’s nucleus model of an atom as well as the planck’s quantum theory, Bohr proposed an atomic model to explain the spectra emitted by hydrogen atom. Bohr’s atom model, so called planetary model of the atom, is based on the following postulates.

(i) Nuclear concept:
An atom consists of a small and massive central core, called nucleus around which planetary electrons revolve. The centripetal force required for their rotation is provided by the electrostatic attraction between the electrons and the nucleus.

(ii) Quantum condition:
Of all the possible circular orbits allowed by the classic theory, the electrons are permitted to circulate only in those orbits in which the angular momentum of an electron is an integral multiple of \(\frac{h}{2 \pi}\), h being planck’s constant.
∵ For any permitted orbit L = mvr = \(\frac{n h}{2 \pi}\)
Where n is positive integer called principal quantum number. The above equation is quantum condition.

(iii) Stationary orbits:
while revolving around the nucleus in the permissible orbits, an electron does not radiate energy. These non-radiating orbits are called stationary orbits.

(iv) Frequency condition:
An atom can emit or absorb radiation in the form of discrete energy photon only when an electron jumps from a higher to lower orbit or from a lower to a higher orbit, respectively. If E x and E2 are the energies associated with these permitted orbits, then the frequency v of the emitted or absorbed radiation is given by
hυ = E2 – E1
This is Bohr’s frequency condition.

Question 40.
Using Bohr’s postulates, drive an expression for the radii of the permitted orbits in the hydrogen atom. What is Bohr’s radius?
Answer: 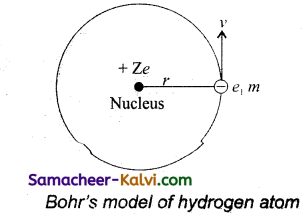 According to Bohr’s theory, a hydrogen atom consists of a nucleus with a positive charge Ze, and a single electron of charge -e, which revolves around it in a circular orbit of radius rn. Here Z is the atomic number and for hydrogen Z = 1.

Where m is the mass of the electron and vn, its speed in an orbit of radius rn
Bohr’s quantisation condition for angular spectrum is 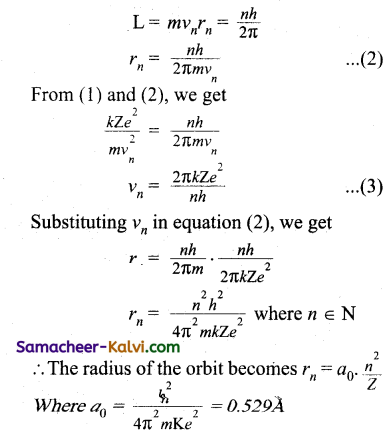 This is known as Bohr radius which is the smallest radius of the orbit in an atom. Bohr radius is also used as unit of length called Bohr. For hydrogen atom (Z = 1) the radius of nth orbit is rn = a0n2

Clearly, the radii of the permitted orbits are proportional to n2 and increase in the ratio of 1 : 4 : 9 : 16 … where n is called the principle quantum number.

41.
Match List -I with List -II and then select the correct answer using the codes given below: 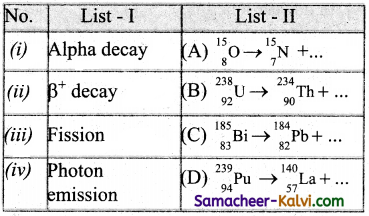 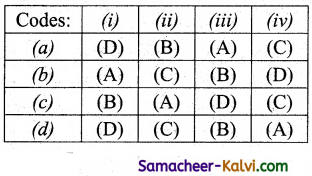 Question 46.
Assertion:
Nuclei having mass number about 60 are most stable.
Reason:
When two or more light nuclei are combined into a heavier nucleus, then the binding energy per nucleon will increase.
Hint:Nuclei having mass number around 60 have maximum binding energy per nucleon, so they are most stable.
Answer:
(b) If both assertion and reason are true but reason is not the correct explanation of assertion.

Question 47.
Assertion:
A beam of charged particle is employed in the treatment of cancer.
Reason:
Charged particles on passing through a material medium lose their energy by causing ionisation of the atoms along their path.
Answer:
(d) If both assertion and reason are false.

Question 49.
Assertion:
On α-decay daughter nucleus shifts two places to the left from the parent nucleus.
Reason:
An alpha particle carries four units of mass.
Hint:
An α-particle carries 2 units of positive charge. So the atomic number of the daughter nucleus decreases by 2 on α-decay.
Answer:
(b) If both assertion and reason are true but reason is not the correct explanation of assertion.

Question 51.
Assertion:
Total energy of electron in an hydrogen atom is negative.
Reason:
It is bounded to the nucleus.
Answer:
(a) If both assertion and reason are true and reason is the correct explanation of assertion.