Question 1.
What are the services included in Service business?
Answer:
Educational, Medical, Hospitality.

Question 2.
Write the meaning of ‘Bank’.
Answer:
Bank plays a vital role by providing the money required for their regular functioning and development.

Question 3.
Briefly explain about Central Bank.
Answer:
Every country has a Central Bank of its own which is called as Central bank. It is the apex bank and the statutory institution in the market of a country. The Central Bank occupies a central position in the monetary and banking system of the country and is the superior financial authority. In India, The Reserve Bank of India is the Central Bank of our country.

Question 5.
Explain the origin of RBI.
Answer:
The Imperial Bank of India carried out the note issue and other functions of the central bank. In 1926 the Hilton-Young Commission or the Royal Commission on Indian Currency and Finance (J. M. Keynes and Sir Ernest Cable were its members) made recommendation to create a central bank.

As a result, the RBI Act 1934 was passed and RBI launched in operations from April 1, 1935. RBI was established with a share capital of ₹ 5 crores divided into shares of ₹ 100 each fully paid up. The entire share capital was owned by private shareholders. Its head office was in Calcutta and moved to Mumbai in 1937.

Question 6.
Who are the persons involved in RBI administration?
Answer:

Question 7.
Classify the various functions of Reserve Bank of India.
Answer:
A. Leadership and Supervisory Functions
B. Traditional Functions and
C. Promotional Functions.

A. Leadership and Supervisory Functions:

Question 8.
Explain the organizational structure of RBI.
Answer:
The head office of the RBI is situated in Mumbai. This central office has 33 ‘ departments in 2017. It has four zonal offices in Mumbai, Delhi, Calcutta and Chennai functioning under local boards with deputy governors as their heads. It also has 19 regional offices and 11 sub-offices (2017). The RBI is governed by a Central Board of Directors. The 21 member board is appointed by the Government of India. It consists of;

Question 11.
Mention the names of Central Banks in three other countries.
Answer:

Question 14.
Collection of photo copy of currencies and coins in India. 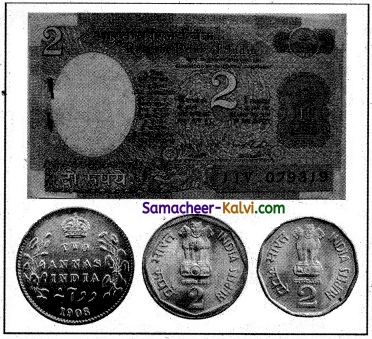 Question 15.
Take up a recent newspaper clipping about . RBI such as the measures taken to reduce NPA. etc.
Answer:
Central banks are not known to be trigger happy. RBI is no exception. Indeed it has often been criticised for being much too cautious. Especially when it come to loosening Capital A/c.’

Question 16.
Arrange for a group discussion on customer grievances and the cases settled by Banking Ombudsman offices.
Answer:
The RBI today said it will bring about a customer grievances redressal mechanism for non-banking finance companies NBFCs by this month end.

Question 17.
Visit the RBI website www.rbi.org.in to read and have a discussion on any annual report, etc.
Answer:
The asset quality of the banking sector continued to be a concern during 2016-2017. In the aftermath of the assets quality review (AQR) undertaken by the RBI.

→ Reserve bank of India was established in 1935. It is the central bank of India. Central – bank of India is important in our economic development. RBI Only issue our currency notes. Its main function is act as a banker to the government and banker’s bank.