Question 2.
Define Bill of Exchange.
Answer:
According to section 5 of the Negotiable Instrument Act, “a bill of exchange is an instrument in writing containing an unconditional order, signed by the maker directing a certain person to pay a certain sum of money only to or to the order of a certain person or to the bearer of the instrument”.

Question 4.
What is meant by a cheque?
Answer:
According to section 6 of the Negotiable Instrument Act 1881 defines a cheque as a “bill of exchange drawn on a specified banker and not expressed to be payable otherwise than on demand”.

Question 5.
Define Endorsement.
Answer:
Section 15 of the Negotiable Instrument Act 1881 defines endorsement as follows, “when the maker or holder of a negotiable instrument signs the name, otherwise that as such maker for the purpose of negotiation on the back or face thereof, or on a slip of paper annexed thereto or so signs for the purpose a stamped paper intended to be completed as a negotiable instrument; he is said to endorse the same and is called the endorsee”.

Question 6.
Explain the nature of a Negotiable Instrument.
Answer:
(i) Transferability:
Anegotiable instrument is transferable from one person to another without any formality, such as affixing stamp, registration etc.

(iii) Right of the transferee to sue:
Though a bill a promissory note or a cheque represents debt, the transferee is entitled to sue on the instrument in his own name in case of dishonour, without giving notice to the debtor that he has become its holder. 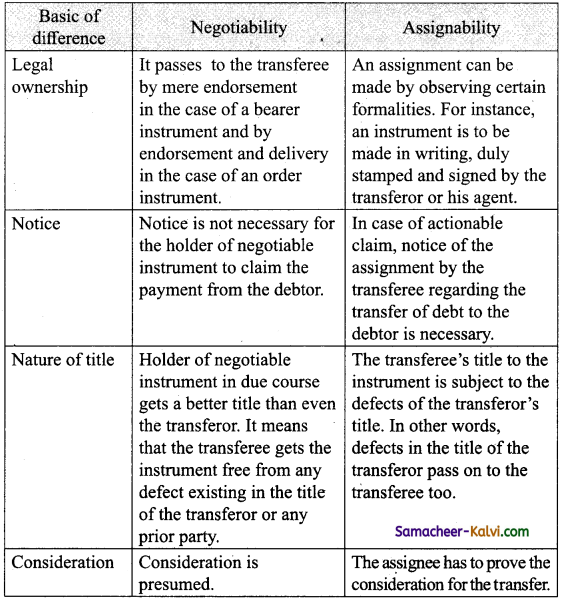 Question 8.
What are the characteristics of a bill of exchange?
Answer: 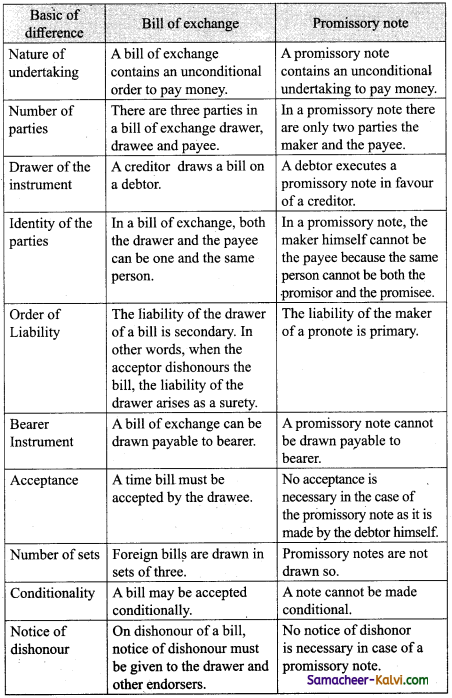 (i) General crossing:
According to section 123 of the Negotiable Instrument Act 1881 “where a cheque bears across its face an addition of the words “and company” or any abbreviation thereof between to parallel transverse lines or of two parallel transverse line simply either with or without the words “not negotiable that addition shall be deemed a crossing and the cheque shall be deemed to be crossed generally”.

Question 12.
Distinguish a cheque and a bill of exchange.
Answer: 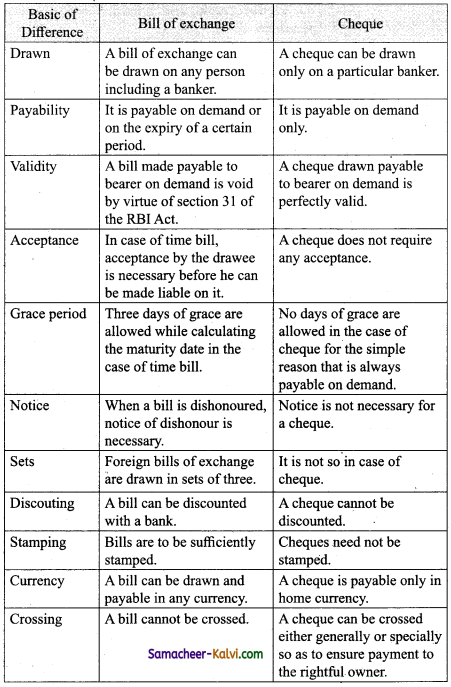 Question 13.
Discuss in detail the features of a cheque.
Answer:
(i) Instrument in writings:
A cheque or a bill or a promissory note must be an instrument in writing. Though the law does not prohibit a cheque being written in pencil, bankers never accept it because of risk involved.

(ii) Unconditional orders:
The instrument must contain an order to pay money. It is not necessary that the word “order” or its equivalent must be used to make the document a cheque. It does not cease to be a cheque just because the word “please” is used before the world pay.

(iii) Drawn on a specific banker only:
The cheque is always drawn on a specified banker. The customer of a banker can draw the cheque only on the particular branch of the bank where he has an account.

(iv) A certain sum of money only:
The order must be for payment of only money. If the banker is asked to deliver securities, the document cannot be called cheque. Further the sum of money must be certain.

(vi) Signed by drawer:
The cheque is to be signed by the drawer. Further it should tally with specimen signature furnished to the bank at the time of opening the account.

Question 14.
What are the requisites for a valid endorsement?
Answer:
If an endorsement is to be valid it must possess the following requisites.

Question 15.
Explain the different kinds of endorsements.
Answer:
Endorsement in blank or general:
(i) Instrument:
When the endorser puts his mere signature on the back of an instrument without mentioning name of the person to whom the endorsement is made it is called general endorsement.

(iii) Conditional or qualified endorsement:
Where the endorser of a negotiable instrument makes his liability dependent upon the happening of an event which may or may not happen, it is called conditional endorsement.

Question 5.
Section 6 of Negotiable Instruments Act 1881 deals with:
(a) Promissory Note
(b) Bills of exchange
(c) Cheque
(d) None of the above
Answer:
(c) Cheque

Question 8.
Which endorsement relieves the endorser from incurring liability in the event of dishonour?
(a) Restrictive
(b) Faculative
(c) Sans recourse
(d) Conditional
Answer:
(b) Faculative