Question 1.
Define Money.
Answer:
“Money is, what money does” – Walker.
“Money can be anything that is generally acceptable as a means of exchange and at the same time act as a measure and on store of value” – Crowther.

Question 4.
What is gold standard?
Answer:
Gold Standard is a system in which the standard currency (the value of money) is directly linked with Gold.

Question 5.
What is plastic money? Give example.
Answer:
It is advanced forms of Financial Products. It is an alternative to cash. They aim at removing the need for carrying cash to make transactions. Eg: Cash Cards, Credit-Cards, Debit Cards etc.

Question 6.
Define inflation.
Answer:
“To much of money chasing too few goods” – Coulboum.
“A state of abnormal increase in the quality of purchasing power” – Gregorye.

Question 7.
What is Stagflation?
Answer:
Stagflation is a combination of stagnant Economic growth, high Employment and high Inflation.

Question 9.
What is money supply?
Answer:

Question 10.
What are the determinants of money supply?
Answer:
(i) Currency Deposit Ratio (CDR):
The ratio of money held by the public in currency to that they hold in back deposits.

(ii) Reserve Deposit Ratio (RDR):
RM consists of (a) Vault Cash in Banks (b) Deposits of Commercial Banks with RBI.

(iii) Cash Reserve Ratio (CRR):
It is the fraction of deposits the Commercial Bank must have with RBI.

(iv) Statutory Liquidity Ratio (SLR):
It is the fraction of the total demand and time deposits of the commercial banks in the form of specified liquid Assets.

(i) Creeping Inflation:
This inflation is very mild and not dangerous to the economy, it will spread over a long period its also known as mild or moderate inflation

(ii) Walking Inflation:
Moderate price rice and when annual inflation rate is a single digit, then its called as walking or trolling inflation

(iii) Running Inflation:
When the price increases like a running of horse at a speed of 10-20% per annum its called as running inflation

(iv) Galloping Inflation:
The unmanagable high inflation. The inflation rates will run into 2 or 3 digits. The percentage will be from 20 to 100 %.

Question 12.
Explain Demand-pull and Cost push inflation.
Answer:
Demand-Pull Inflation:
At all points of time in the Economy, the demand and supply play an important role.
Eg: Where the is more demand and supply is less, the price of the product increases.

Cost-Push Inflation:
When the cost of the raw material and the input increases, this inflation occur. Increase in wages paid to the labour also leads to Inflation.

Question 13.
State Cambridge equations of value of money.
Answer:
(Cash Balance Approach)
The Marshall Equation is M = KPY
M – Quality of money
Y – Aggregate real income of the community
P – Purchasing power of money
K – Fraction of real Income Public desires to hold in the form of money.
The Price level
P – M/KY or The value of money (The reciprocal of price level) is
1/P = KY/M

According to Keynes, people’s desire to hold money is unaltered by Monetary authority. So price level and value of money can be stablised through regulating quantity of money (n) by Monetary Authority.

Question 14.
Explain disinflation.
Answer:
Disinflation is the slowing down the rate of inflation by controlling the amount of credit.
Eg: Bank Loan, hire purchase available to consumers without causing more unemployment.

Definition of Disinflation:
Disinflation may be defined as the process of revesing Inflation without creating unemployment or reducing output in the Economy.

Question 15.
Illustrate Fisher’s Quantity theory of money.
Answer:
This theory explains the relationship between Quality of money and value of money.
Fisher’s Theory:
He gave a quantitative form in terms of his famous “Equation of Exchange”
MV = PT
The total quantity of money (MV)
Will be equal to
The total value of all goods and services bought and sold (PT)
MV = PT
Supply of Money = Demand for Money (Cash Transaction Equation)
M = Money Supply/Quantity of Money
V = Velocity of Money
P = Price Level
T = Volume of Transaction 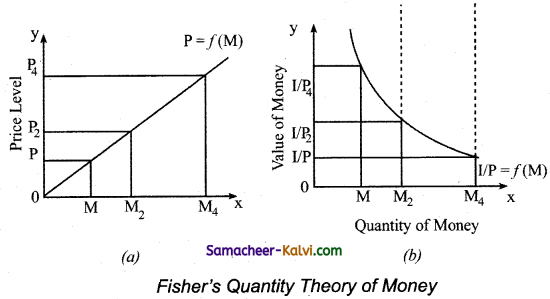 Question 16.
Explain the functions of money.
Answer:
Primary Function:
(i) Money as a medium of exchange:
It is a basic function of money. It is accepted by all and all exchanges takes place in terms of money. Money is obtained through sales and purchases.

(ii) Money as a Measure Value:
Prices of all goods and services are expressed in terms of money. It is a collective measure value. So it is easier to determine the rate of exchange between various goods.

Secondary Functions:
(i) Money as Store Value:
The invention of money made storage easy. It is a store of wealth and it can be easily converted into other marketable assets like land, machinery etc.

(iii) Money as a Means of Transferring Purchasing Power:
The exchange of goods are made easy due to the Transfer of purchasing power of money from one place to another.

Contingent Functions:
(i) Basis of Credit System:
Business transactions are done on the basis of credit system. Money is at the back of all credit.

(iv) Money Increases productivity of capital:
Capital in the form of money can be put to any use. It can be transferred from less to more productive use.

(ii) Money represents Generalised Purchasing Power:
Purchasing power kept in terms of money can be put to any use.

(iii) Money gives Liquidity to capital:
Money is the most liquid form of capital. It can be put to any use.

Question 17.
What are the causes and effects of inflation on the economy?
Answer:
Causes:
(i) Increase in Money Supply: Inflation is caused by an increase in supply and increases aggregate demand.
(ii) Increase in Disposable Income: Disposable income increases National Income and reduction of taxes.
(iii) Increase in Public Expenditure: Government activities like welfare programmes are expanding it also cause increase in price.
(iv) Increase in consumer spending: The demand for goods and services increases on hire purchases.
(v) Cheap Money Policy: This leads to increase in money supply and demand.
(vi) Deficit Financing: Borrowing from public by the Government due to this aggregate demand and supply increases and rise in price.
(vii) Black assets, activities and Money: The Black money increases Aggregate demand because people spend that money lavishly. But supply of goods are reduced.
(viii) Repayment of Public Debt: When the government repay the past debt to public, money supply with the public increases.
(ix) Increase in Exports: When exports are encouraged, domestic supply of goods and services increases.

Effects of Production:
When resources are not fully utilised, the profit induces business class to
increase their investments in production.
(i) Hyper-inflation results in depreciation of value of money.
(ii) When value of money depreciate, foreign capital reduces.
(iii) With the reduced capital, investment setbacks will discourage entrepreneurs.
(iv) Inflation leads to hoarding of essential goods.
(v) Inflation encourages investment in speculative activities.

Effects on Distribution:
(i) Debtors and Creditors: During inflation debtors gain and creditors lose because of high purchasing power of money.
(ii) Fixed-Income groups: The Fixed Income groups are worst hit during Inflation.
(iii) Entrepreneurs: Inflation is a boon to the entrepreneurs like Traders, merchants.
(iv) Investors: Those who invest in Fixed interest lose during inflation but who invest on shares gain by rich dividend.

Question 18.
Describe the phases of Trade cycle.
Answer:
There are four different Phases of Trade Cycle.
(i) Boom or Prosperity Phase:
Movement of Economy beyond full employment is called boom phase during this phase profits increase, interest rate group. The Demand for bank credit increases. 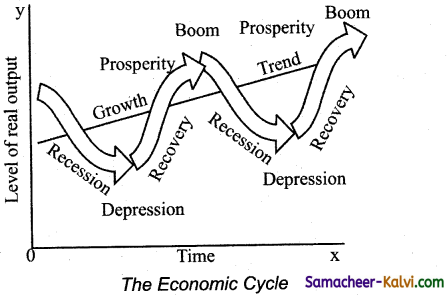 (ii) Recession:
The turning point from boom is called recession. Failure of a company or bank brings this phase. Investments are reduced and production comes down income and profit decline panic in stock market and money market becomes tight.

(iii) Depression:
The Level of Economic activity becomes low. Firms will close because of losses and it will result in unemployment. Agriculture will decline. It is a worst phase of business cycle. Extreme depression is called as ‘Trough’.

(iv) Recovery:
After depression, its recovery. It brings the demand for capital goods and Autonomous investment, the demand slowly increases. Recovery may be initiated by investment by government Expenditure.

Question 8.
______ inflation results in a serious depreciation of the value of money.
(a) Creeping
(b) Walking
(c) running
(d) Hyper
Answer:
(d) Hyper

Question 10.
During inflation, who are the gainers?
(a) Debtors
(b) Creditors
(c) Wage and salary earners
(d) Government
Answer:
(a) Debtors

Question 13.
The study of alternating fluctuations in business activity is referred to in Economics as:
(a) Boom
(b) Recession
(c) Recovery
(d) Trade cycle
Answer:
(d) Trade cycle

Question 15.
“Money can be anything that is generally acceptable as a means of exchange and that the same time acts as a measure and a store of value”. This definition was given by:
(a) Crowther
(b) A.C.Pigou
(c) F.A.Walker
(d) Francis Bacon
Answer:
(a) Crowther

→ Contingent Functions: Making use of money as cheques.

→ Dead Money: A situation in which money or loans are very difficult to obtain in a given country, the rate of Interest rate to be pushed up due to the forces of demand and supply.

→ Call Money: Low rate of Interest and paid back at short notice.

→ Cheap Money: The maintenance of low interest rate during a period of depression to encourage investment.

→ Inflationary Gap: “An excess of anticipated of expenditure over available output at base prices”.

→ Over Draft: A negative balance in a Bank account and customer owes the money to the Bank.

→ Purchasing Power Parity: An exchange rate between two currencies, that same amount of products can be bought for same amount in each country if the cost were converted at that exchange rate.

→ Definitions of Money:
Many economists developed definition for money. Among these, definitions of Walker and Crowther are given below:
“ Money is, what money does ” – Walker.
“Money can be anything that is generally acceptable as a means of exchange and at the same time acts as a measure and a store of value”. – Crowther.

→ Definition of Inflation:
“7oo much of Money chasing too few goods” – Coulboum.
“A state if abnormal decrease in the quantity ofpurchasing power” – Gregorye.

→ Definition of Marshall’s Value of Money:
According to Marshall’s equation, the value of money is influenced not only by changes in M, but also by changes in K. where,
M – Quantity of money
K – The fraction of the real income which the public desires to hold in the form of money.