Question 3.
The xylem and phloem arranged side by side on same radius is called:
(a) radial
(b) amphivasal
(c) conjoint
(d) None of these
Answer:
(c) conjoint

Question 6.
Oxygen is produced at what point during photosynthesis?
(a) when ATP is converted to ADP
(b) when CO2 is fixed
(c) when H2O is splitted
(d) All of these
Answer:
(d) All of these

III. State whether the statements are true or false. Correct the false statement.

V. Answer in a sentence:

Question 4.
Name the phenomenon by which carbohydrates are oxidized to release ethyl alcohol.
Answer:
Alcohol fermentation.

Question 1.
Give an account on vascular bundle of dicot stem.
Answer:
Vascular bundles of dicot stem are conjoint (xylem and phloem lies in the same radius) collateral (xylem is the centre and phloem lies towards periphery) endarch (proto xylem in the centre, Meta xylem lies in the periphery) and open (cambium present in between xylem and phloem: They are arranged in the form of ring around the pith.

Question 2.
Write a short note on mesophyll.
Answer:
In Dicot leaf, the tissue present between the upper and lower epidermis is called mesophyll. It is differentiated into

In monocot leaves, mesophyll is present between both upper and lower epidermal layer. The cells are irregularly arranged with intercellular spaces. Mesophyll cells contain chloroplasts, to take part in photosynthesis.

Question 3.
Draw and label the structure of oxysomes.
Answer: 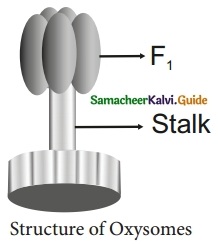 Question 5.
What is photosynthesis and where in a cell does it occur?
Answer:
Photosynthesis is a process by which autotrophic organisms (green plants, algae and chlorophyll containing bacteria) utilize the energy from sunlight to synthesize their own food. It occur in the chloroplast of the cell.

(b) Aerobic and Anaerobic respiration
Answer:

The electrons, as they move through the system, release energy which is trapped by ADP to synthesize ATP. This is called Oxidative Phosphorylation. During this process, oxygen which is the acceptor of electrons gets reduced to water.

(b) Explain how the biochemical pathway of photosynthesis recycles many of its own reactions and identify the recycled reactants.
Answer:
Light reaction use light to synthesize ATP and NADPH2. The calvin cycle uses these reactants to produce sugar from CO2 molecule.
This cycle then produce NAP + ADP + Pi which is used in light reaction with H2O molecules to produce ATP and NADPH2 again.

Question 3.
The innermost layer of the cortex is:
(a) epidermis
(b) hypodermis
(c) endodermis
(d) pericycle
Answer:
(c) endodermis

Question 5.
The vascular bundle with protoxylem facing centre of the stem is:
(a) exarch
(b) endarch
(c) tetrarch
(d) polyarch
Answer:
(b) endarch

Question 12.
The layer is morphologically homologous to the endodermis found in the root which is:.
(a) periderm
(b) epidermis
(c) starch sheath
(d) mesophyll tissue
Answer:
(c) starch sheath

Question 15.
Which of the following is not applicable of dicot stem?
(a) wedge shaped
(b) endarch
(c) collateral
(d) closed
Answer:
(d) Closely arranged

Question 1.
In the given flow chart different layer of monocot root is shown. What is A and B?

III. Fill in the blanks:

Question 1.
What are the functions of Epidermis?
Answer:

The process of photosynthesis is affected externally by:

Question 4.
What is Cortex?
Answer:
The region below the epidermis is called cortex. Its main function is to store starch.

Question 5.
What is Pericycle?
Answer:
Pericycle is the outer most layer of stele. It is made of single layer of thin walled cells.

Question 6.
What are the functions of chloroplasts?
Answer:

Question 4.
What are photosynthetic pigment?
Answer:

Question 5.
(a) Differentiate between Palisade parenchyma and spongy parenchyma.
Answer:

(b) Differentiate between Monocot ieaf and Dicot leaf.
Answer:

Question 13.
What are the functions of epidermal tissue system?
Answer: 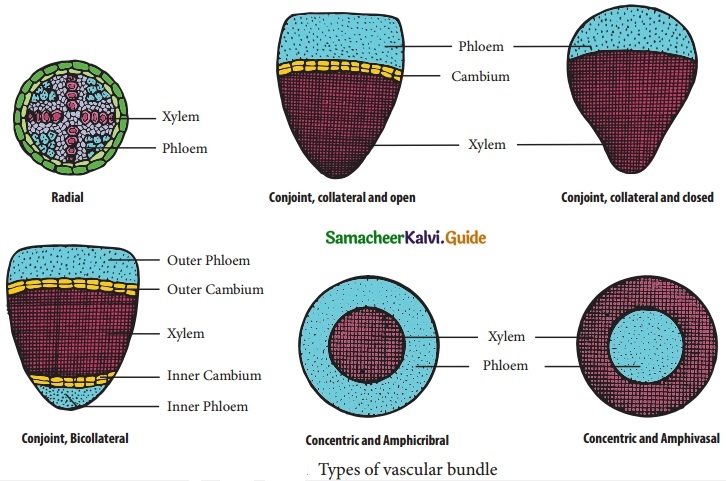 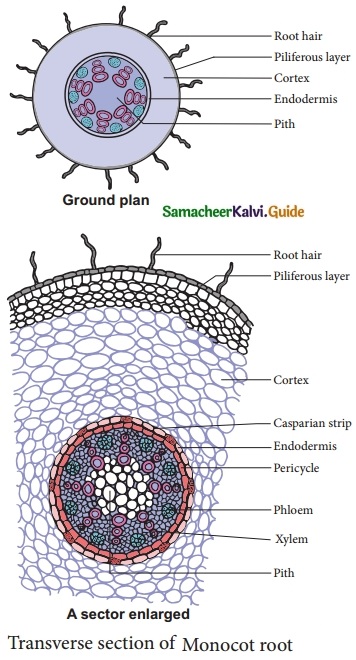 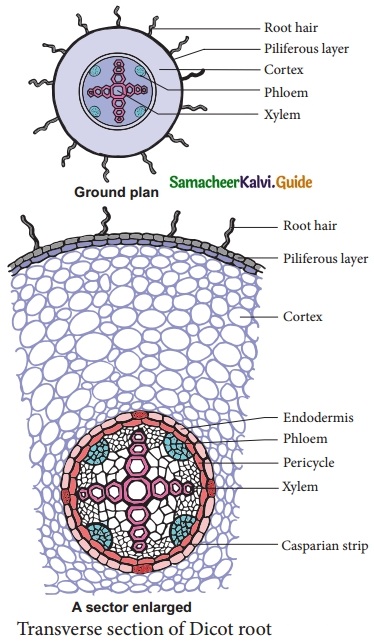 Question 5.
Describe the Primary structure of T.S of Monocot stem.
Answer:
(i) Epidermis: 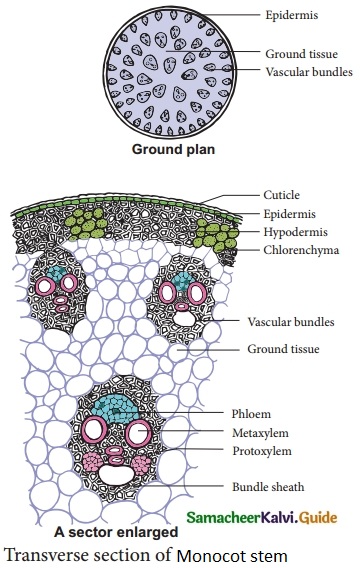 Question 6.
Write a short note on structure of chloroplast.
Answer:
(i) Chloroplast are the actual site of photosynthesis.
(ii) They are green plastids containing green pigment called chlorophyll.
(iii) It mainly consists of Envelope, Stroma, Thylakoids and Grana.

Envelope : Chloroplast has outer and inner envelope membranes which is seperated by intermembrane space.
Stroma : Matrix present inside to the membrane is called stroma. It contains DNA, 70 S ribosomes and other molecules required for protein synthesis.
Thylakoids : It’s membrane encloses thylakoid lumen. Thylakoids forms a stack of disc like structures called a grana (singular-granum).
Grana : Some of the thylakoids are arranged in the form of discs stacked one above the other. These stacks are termed as grana,they are interconnected to each other by membranous lamellae called Fret channels.

(i) Epidermis :
The leaf is dorsiventral it has upper and lower epidermis.

(ii) Mesophyll :
The region between upper and lower epidermis is called mesophyll. It is differentiated into palisade and spongy parenchyma.

Question 1.
The cells of endodermis show band like thickening on their radial and inner tangential walls called casparian strips. Why?
Answer:
It is to prevent the re-entry of water into the cortex once water entered the xylem tissue.

Question 3.
How do we see beautiful colours in Autumn and enjoy the fall?
Answer:
Chlorophyll gives a green colour to plants. During winter, there is not enough light for photosynthesis. So they use food, which is stored in summer. As the green chlorophyll disappears or fades away, we begin to see yellow, orange and red colour. We cannot see them in summer, because they are covered by the green chlorophyll.

But in autumn or fall season glucose trapped in the leaves, after photosynthesis stops. Sunlight and cool nights of autumn cause the leaves to turn this glucose into a red colour.
It is the combination of all these things, that make the beautiful colours, we enjoy in the fall.