Question 1.
The Governor of the State is appointed by the:
(a) Prime Minister
(b) Chief Minister
(c) President
(d) Chief Justice
Answer:
(c) President

Question 3.
Which among the following is not one of the powers of the Governor?
(a) Legislative
(b) Executive
(c) Judicial
(d) Diplomatic
Answer:
(d) Diplomatic

Question 4.
Who can nominate one representative of the Anglo-Indian Community to the State Legislative Assembly?
(a) The President
(b) The Governor
(c) The Chief Minister
(d) The Speaker of State legislature
Answer:
(b) The Governor

Question 11.
Which one of the following States does not possess a bicameral legislature?
(a) Andhra Pradesh
(b) Telangana
(c) Tamil Nadu
(d) Uttar Pradesh
Answer:
(c) Tamil Nadu

(ii) The Directive Principles of the State Policy and Fundamental Duties of the Constitution are not applicable to the State of Jammu and Kashmir.

(iii) Rights to property, which is denied as a Fundamental Right to rest of India is still guaranteed in Jammu and Kashmir.

Question 2.
What is the importance of the Governor of a state?
Answer:

Question 3.
What are the qualifications for the appointment of Governor?
Answer:
Qualifications of the Governor is given below

Question 4.
What is the original Jurisdiction of the High Court?
Answer:

Question 5.
What do you understand by the “Appellate Jurisdiction” of the High Court?
Answer:
As courts of appeal, all High Courts hear appeals in both civil and criminal cases against the divisions of the subordinate courts and can review their judgements.

Question 1.
What are the powers and functions of the Chief Minister?
Answer:

The Powers and Functions of the Chief Minister:

Relating to the Council of Ministers:

Relating to the Governor:

Other function and powers:

(v) The Money Bills can be introduced in the State Legislature only with the prior recommendation of the Governor.

(vi) He constitutes a Finance Commission after every five years to review the financial position of the panchayats and the municipalities.

Control over the Executive:

Question 5.
Describe the powers and functions of the High Court
Answer:
High Court is the highest court in the state. Every High Court consists of a Chief Justice and other judges appointed by the President. The High Court enjoys the following Jurisdiction.

(i) Original Jurisdiction: The High Court can hear the cases like such as matters of admiralty, probate and matrimonial, contempt of court and in criminal cases.

(ii) Appellate Jurisdiction: As courts of appeal all High Courts appeals in civil and criminal cases and also cases of their own.

(iii) Writ Jurisdiction: Writs are issued by the High Court not only for the enforcement of fundamental rights but also where an ordinary legal rights has been infringed.

(a) High Court has the power of superintendence over all courts and tribunals, (except military courts)
(b) High Court has an administrative powers.
(c) Its law is binding on all subordinate courts functioning within its territorial jurisdiction.
(d) It is consulted by the governor in the matters of appointment , posting and promotion, grant of leave, transfers and discipline court of Record.
(e) All the decisions and decrees issued by the High Court are printed and kept as a record for future needs.

Judicial Review: To examine the constitutionality of Legislative enactments and executive orders of both the central and the State Governments. 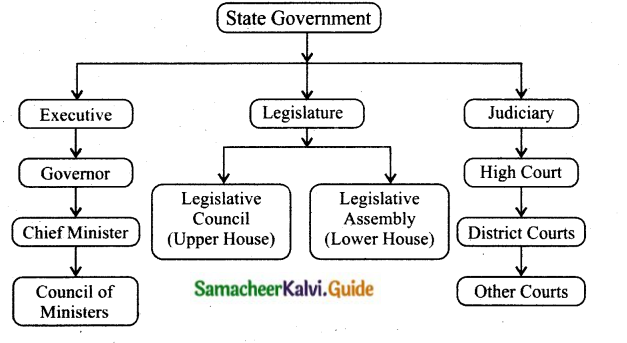 Question 2.
Students to list out the names of the Tamil Nadu Governor, Chief Minister, Ministers and the Governors and Chief Ministers of the neighbouring States.
Answer: 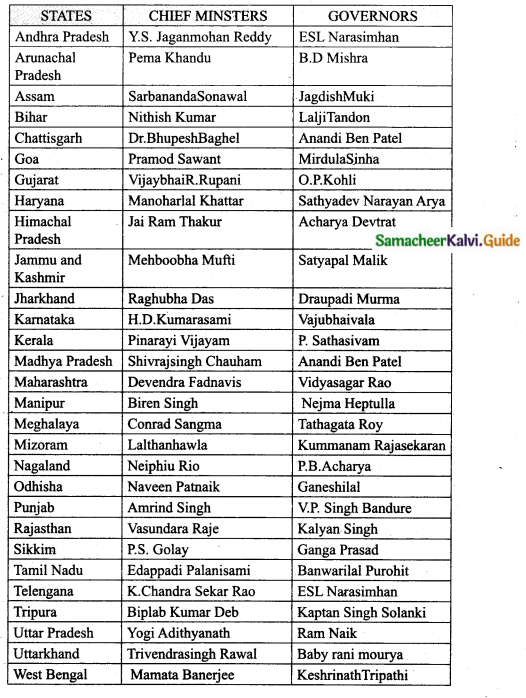 I. Choose the Correct Answer

Question 3.
The administration of the State is carried on in the name of the:
(a) Chief Minister
(b) Council of Ministers
(c) Speaker
(d) Governor
Answer:
(d) Governor

Question 5.
The ……………… has the power to summon, prorogue the State Legislative Assembly.
(a) President
(b) Governor
(c) Chief Minister
(d) Chairman of the Legislative Council
Answer:
(b) Governor

Question 1.
Write a short note on cabinet and cabinet committees.
Answer:
The Cabinet is the nucleus of the Council of Ministers. It consists of only the Cabinet Ministers. It is the real centre of authority in the State Government.
The cabinet works through various committees called Cabinet Committees. They are of two types – standing and ad hoc – the former are of a permanent nature while the latter are of a temporary nature.

Question 2.
How the Governor is appointed to a state?
Answer:

Question 6.
Write a brief note on the High Court of Madras?
Answer:

Question 8.
How many High Courts are there in our country and who decides the number of judges to each High court?
Answer:

Question 9.
What do you mean by appellate system?
Answer:
It means that a person can appeal to a higher Court if they are not satisfied with the judgement of the lower Court.

Question 10.
Which Amendment abolished the power of Judicial Review by the state High Court? And by which amendment it was restored?
Answer:

Question 1.
What are all the privileges enjoyed by the Governor?
Answer:

(ii) It deals with the matters of posting, promoting, grant of leave, transfers and discipline of . the members of the judicial services of the State.

(iii) It can withdraw a case pending in a subordinate court if it involves a substantial question of law that requires the interpretation of the Constitution. It can then either dispose of the case itself or determines the questions of law and return the case to the subordinate court with its judgement.

Question 3.
Write about the Writs issued by the High Court?
Answer:
Under Article 226 of the constitution the High Courts are given powers of issuing writs. They are:

Habeas Corpus: It is issued to a detaining authority ordering the detainer to produce the detained person in the issuing court, along with the cause of his or her detention.

If the detention is found to be illegal, the court issues an order to set the person free.

Mandamus: It is issued to a Subordinate Court, an office or Government, or a Corporation or other Institution commanding the performance of certain acts or duties.

Prohibition: The writ of prohibition is issued by a higher court to a lower court prohibiting it from taking up a case because it is not under the jurisdiction of the lower court. Thus the higher court transfers the case to it. Quo Warranto: It is issued against a person the legality of holding a public office. Through this writ the court inquires “by what authority”? The person supports his / her claim.

Certiorari: This writ is issued to lower court directing that the record of a case be sent up for review, together with all supporting files, evidence and documents. It is one of the mechanism by which the fundamental rights of the citizens are upheld.

Question 4.
What are the works done by the High Court under supervisory Jurisdiction?
Answer:
The High Court has the power of superintendence over all Courts and Tribunals functioning in its Territorial Jurisdiction ( except the Military Courts or Tribunals).