Question 2.
In which session of the Indian National Congress was Non-Cooperation approved?
(a) Bombay
(b) Madras
(c) Lucknow
(d) Nagpur
Answer:
(d) Nagpur

Question 1.
Describe the Jallianwala Bagh Massacre.
Answer:
On 13 April 1919, a public meeting was organised at Jallianwala Bagh in Amritsar in defiance of the Rowlatt Act. As it happened to be Baisaki Day, thousands of villagers had gathered there to enjoy the day together. General Reginald Dyer, on hearing the assemblage, surrounded the place with his troops and an armoured vehicle. He blocked the only entrance to the park and ordered his troops to fire without any warning. The firing continued for ten minutes in which about 370 were killed and more than thousand injured. However, an unofficial estimates put the death toll at more than thousand. The Jallianwala Bagh massacre is a big scar on the British Indian history.

Question 2.
Write a note on the Khilafat Movement.
Answer:

Question 3.
Why did Gandhi withdraw the Non-Cooperation Movement?
Answer:
The Non-cooperation Movement started in 1920. It soon became a nation-wide movement because it got support from the people across the country. But in February 1922, a violent incident occurred at Chauri Chaura, a village near Gorakhpur in Uttar Pradesh. In this incident a procession of nationalists provoked by the police turned violent. The police finding themselves outnumbered shut themselves inside the police station. The mob burnt the police station in which 22 policemen lost their lives. The incident hurt Gandhiji too much and he immediately withdrew the movement.

Question 4.
What was the conflict between the Swarajists and no-changers?
Answer:
The pro – changers (Swarajis) led by motilal Nehru and C.R. Das were the congressmen who wanted to contest the elections and enter the legislature.

They argued that the national interest could be promoted by working in the legislative councils under Dyarchy and the colonial Government could be wrecked within.

But on the other hand the followers of Gandhiji (no – changers) like Patel and C. Rajaji wanted to continue Non – Cooperation with the Government.

This was the conflict between the Swarajis and the no – changers.

Question 5.
Why was Simon Commission boycotted?
Answer:
On 8 November 1927, the British Government announced the appointment of the Indian Statutory Commission. It was composed of seven members headed by Sir John Simon which came to be known as the Simon Commission. When the Simon Commission arrived in India in 1928, millions of Indians were infuriated with the idea of an all- British committee writing proposals for Indian constitutional reforms without any member or consultations with the people of India. The Commission was, therefore, boycotted everywhere. Holding black flag in their hands the protesters shouted, “Go back Simon”.

Question 6.
What is Poorna Swaraj?
Answer:

Question 7.
Write a note on Bhagat Singh.
Answer:
Bhagat Singh was an Indian socialist revolutionary whose two acts of dramatic violence against the British in India and the execution at the age of 23 made him a folk hero of the Indian Independence Movement. Bhagat Singh along with B. K. Dutt threw a smoke bomb inside the Central Legislative Assembly in 1929.

It was not intended to hurt anyone. They threw pamphlets and shouted ‘Inquilab Zindabad’ and ‘Long Live the Proletariat’. He along with Rajguru was arrested and sentenced to death. Bhagat Singh’s daring act fired the imagination of the youth across India and he became popular.

Question 8.
What are the terms of the Poona Pact?
Answer:
An agreement arrived between Gandhiji and Ambedkar came to be known as ‘Poona pact’. It’s main terms were.

VI. Answer all the questions given under each caption

(b) Name the works that influenced Gandhi?
Answer:
Tolstoy’s The Kingdom of God is Within You, Ruskin’s Unto This Last and Thoreau’s Civil Disobedience.

(c) How did Gandhi use satyagraha as a strategy in South Africa?
Answer:
Gandhi developed satyagraha (truth-force) as a strategy, in which campaigners went on peaceful marches and presented themselves for arrest in protest against unjust laws.

(a) What is constructive programme?
Answer:
After the chauri chaura incident, Gandhiji felt that the volunteers and the people had to be trained for a non – violent struggle, and take up in hand the youth of the country and make them the real soldiers of Swaraj. This is the constructive programme, Gandhiji wanted to implement. More over he focussed on promoting khadhi, Hindu – Muslim unity and the abolition of untouchability.

(b) What did Gandhi exhort the Congressmen to do?
Answer:
He exhorted the congressmen to go throughout their districts and spread the message of Khaddar, Hindu – Muslim unity and anti – untouchability.

(c) How did Gandhi try to bring about Hindu-Muslim unity?
Answer:
Gandhiji undertook a 21 days fast in between 1924 to appeal to the hearts of the Hindus and Muslims involved in communal politics.

(d) What is the contribution of Gandhi towards abolition of untouchability?
Answer:
Gandhiji made his life’s mission to wipe out untouchability. He sought to abolish the pernicious custom of untouchability not the caste system. He undertook an all India tour called the Harijan (Children of God) Tour.

(a) How did Subhas Chandra Bose reach Japan?
Answer:
First he went to Germany, from there he made his way to Japan on a submarine and took control of the Indian National Army.

(ii) He introduced a new instrument Satyagraha, which he had perfected in South Africa, that could be practiced by men and women, young and old. As a person dedicated to the cause of the poorest of the poor, he instantly gained the goodwill of the masses.

(iii) Unlike the constitutionalists who appealed to the British sense of justice and the militants who confronted the repression of the colonial state violently, Gandhiji adopted non-violent methods to mobilize the masses and mount pressure on the British.

(iv His Champaran Satyagraha of 1916 earned immense success. This followed by his fruitful intervention in the Ahmedabad mill strike and the Kheda Satyagraha in 1918. These factors helped Gandhiji establish as a leader of mass struggle.

(v) The people from across the country began to support him whole-heartedly. They found in him all the qualities of a mass leader. So, they loved him and were ready to do what he said. They showed immense faith in him because they were sure Gandhiji would bring freedom for them.

Thus the Civil Disobedience Movement is a typical example of Gandhian Movement.

Question 3.
Discuss the reasons behind the partition of India.
Answer:
While the Indian National Congress was calling for Britain to quit India, in 1943, the Muslim League passed a resolution demanding the British to divide and quit. There were several reasons for the separate Muslim homeland in the sub-continent:
(i) As colonizers, the British had followed a divide-and-rule policy in India. In the census, they categorized people according to religion and viewed and treated them as separate from each other.

(ii) The British based their knowledge of the people of India on religious texts and the intrinsic differences they found in them, instead of examining how people of different religions coexisted.

(iii) As soon as the Muslim League was formed. Muslims were placed on a separate electorate.
Thus, the separateness of Muslims in India was built into the Indian electoral process,

(iv) There was also an ideological divide between the Muslims and the Hindus of India. While there were strong feelings of nationalism in India, by the late 19th century there were also communal conflicts and movements in the country that were based on religious identities rather than class or regional ones.

(v) Both Hindu Mahasabha and Muslim League claimed that the interests of the Hindus and Muslims were different and hostile to each other.

(vi) The British policy of divide and rule, through measures such as Partition of Bengal, Communal Award, had encouraged the vested interests out to exploit the religious differences.

Question 1.
Students can be asked to mark the important places of Gandhian Movement in a map and write a sentence or two about what happened there. 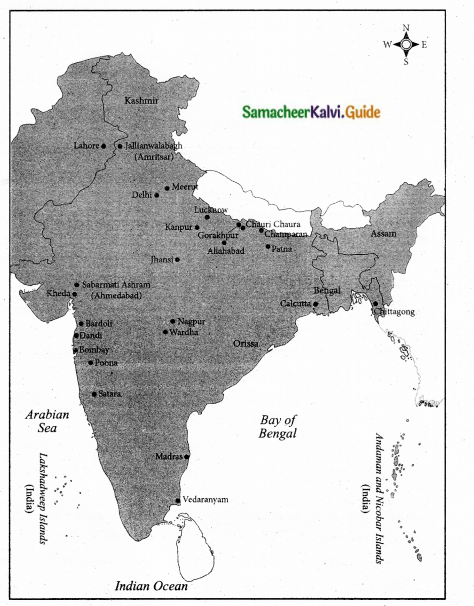 Question 2.
Students can be divided into groups and asked to debate the views of Gandhi, Jinnah, B.R. Ambedkar, Revolutionaries and Communists.
Answer:
(A debate for 5 to 7 minutes)
Step1: Class will be divided in to different groups representing the views of

Step 2: From each group one person will be asked to prepare the debate.

Step 3: Debate can be between Gandhi and Jinnah, Gandhi and Ambedkar. Revolutionaries and communists.

Step 4: The students can selects the Character of each (Revolutionary, communist) of their own choice.

Step 5 : The final conclusion on the debate will be compiled and declared by the students as audience.

Step 6: Concluding part can be given by the teacher concerned.

Question 4.
The Minto-Morley reforms introduced separate electorate for the …………..
(a) Hindus
(b) Muslims
(c) Sikhs
Answer:
(b) Muslims

Question 14.
Gandhiji advocated a new technique in our freedom struggle …………….
(a) Satyagraha
(b) Long march
(c) Violence
Answer:
(a) Satyagraha

Question 2.
Match the colum I with Column II.

Question 1.
What were the aims of Indian National Congress?
Answer:

Question 2.
What made Gandhi to fight for the rights of the Indians in south Africa?
Answer:

Question 3.
Mention the importance of Lucknow session of the Indian National Congress
Answer:

Question 5.
What were the aims of the Muslim League?
Answer:
Aims of Muslim league:

Question 7.
What were the changes introduced by the Government of India Act of 1935?
Answer:

VI. Answer all the question given under each caption

(b) On whose advice was it founded?
Answer:
It was founded on the advice of a retired British Civil Servant Allan Octavian Hume.

(c) Where was the first session of the congress held? Who was the chairperson?
Answer:

(d) Name some of the leaders who attended the first session of the congress.
Answer:

(b) Who were the members of the Cabinet Mission?
Answer:
Cabinet Mission comprised pethick lawrence, Sir Stafford Cripps and A.V Alexander.

(d) What was the suggested given for transfer of power?
Answer:
It suggested to elect a Constituent Assembly and an Interim Government to be set up with representation for all the communities.

Question 4.
Jallianwala Bagh Tragedy
(a) Who were the prominent leaders Arrested?
Answer:
Dr. Satyapal, and Dr. Saifuddin Kitchlew were arrested.

Question 5.
Congress Ministries and Their Work (1937)

(b) Who was benefited immensely? How?
Answer:
The congress was benefitted because of the Civil Disobedience movement.

(c) What was the response of congress?
Answer:
The congress called off its programme of boycott of legislature and contested election.

(d) Name some of the measures taken by the congress after forming ministry.
Answer:
Congress ministries responded to the needs of the people. Legislative measures were adopted for reducing the indebtedness of the peasantry and improving the working conditions of the industrial labour.

Question 1.
Write a paragraph on the Partition of Bengal.
Answer:

Question 2.
What were the movement led by Gandhi towards the struggle for freedom.
Answer:
Gandhi’s Principles was based on Truth and Non – violence.

Non – Cooperation Movement:
Resolution was passed in the Calcutta session of Indian National Congress on September 1920.

No – tax campaign and boycott of foreign goods and institutions were effective.

Pooma Swaraj was declared by Nehru at Lahore session of congress in 1930.

Gandhi said ‘‘We shalTeither .free India or die in the cause attempt: We shall not live to see the perpetuation of our slavery?’.

“Gandhi and other congress leaders were arrested”.