I. Choose the correct answer from the given option: 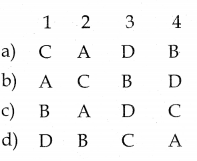 Question 11.
What is the name of the process given below? Write its 4 types.
Answer:

Question 12.
How will you avoid the growth of microbes in the nutrient medium during the culture process? What are the techniques used to remove the microbes?
Answer:
The microbial growth in the culture medium can be overcome by autoclaving the medium at Plant Tissue Culture II 121°C (15 psi) for 15 to 30 minutes.

Question 14.
What do you mean Embryoids? Write its application.
Answer:
Somatic embryogenesis is the formation of embryos from the callus tissue directly and these embryos are called Embryoids or from the in vitro cells directly form pre-embryonic cells which differentiate into embryoids.
Applications:

1. Totipotency: The property of live plant cells that they have the genetic potential when cultured in a nutrient medium to give rise to a complete individual plant.

2. Differentiation: The process of biochemical and structural changes by which cells become specialized in form and function.

3. Redifferentiation: The further differentiation of already differentiated cell into another type of cell. For example, when the component cells of callus have the ability to form a whole plant in a nutrient medium, the phenomenon is called redifferentiation. 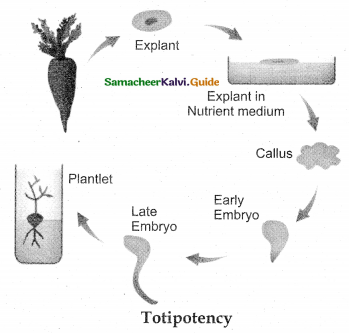 Question 17.
Based on the material used, how will you classify culture technology? Explain it.
Answer:
Based on the explants some other plant tissue culture types are:
1. The culture of embryos

2. Meristem culture
The culture of any plant meristematic tissue on culture media.

Question 18.
Give an account on Cryopreservation. The parts such as,
Answer:
Cryopreservation, also known as Cryo-conservation, is a process by which protoplasts, cells, tissues, organelles, organs, extracellular matrix, enzymes or any other biological materials are subjected to preservation by cooling to a very low-temperature of-196°C using liquid nitrogen. At this extremely low temperature, any enzymatic or chemical activity of the biological material will be totally stopped and this leads to the preservation of material in dormant status.

Later these materials can be activated by bringing to room temperature slowly for any experimental work. Protective agents like dimethyl sulphoxide, glycerol, or sucrose are added before the cryopreservation process. These protective agents are called cryoprotectants since they protect the cells, or tissues from the stress of freezing temperature.

Question 19.
What do you know about Germplasm conservation? Describe it. Definition
Answer:
Living genetic resources such as pollen, seeds, or plant tissue materials are preserved in living conditions for future use for many hybridization crop improvement research works. Eg. Pollen banks, Seedbanks

Question 20.
Write the protocol for artificial seed preparation
Answer:
Later these seeds are grown in vitro medium and converted into plantlets. These plantlets require a hardening period (either greenhouse or hardening chamber) and then shifted to normal environmental conditions. 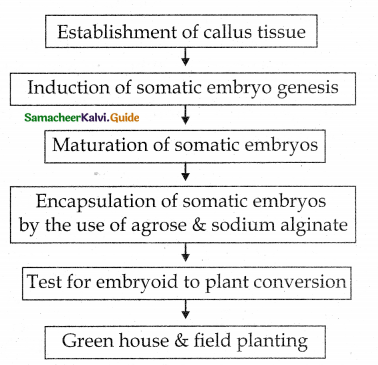 Question 2.
The concept of Totipotency was proposed by.
a) Hildbrandt
b) Haberlandt
c) Chilton
d) Takebe et-al
Answer:
b) Haberlandt

Question 11.
This is not of the strategies used to make cell suspension
a) biotrans formation
b) elicitation
c) immobilization
d) filtration
Answer:
d) filtration

Question 13.
This is not a technique in PTC?
a) organ culture
b) Meristem culture
c) Cell culture
d) M.S. culture
Ans:Answer:d) M.S. culture

Question 14.
Which one of the following is the correct steps in the direct embryogenesis? 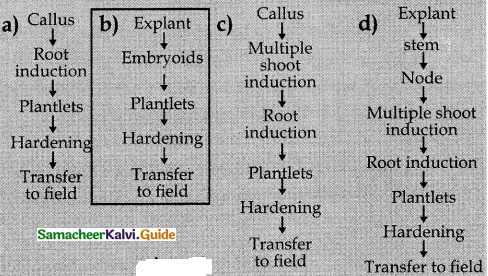 Question 19.
From the following secondary metabolites which one is used as cardioc tonic
a) capsaicin
b) Quinine
c) Codeine
d) Digoxin
Answer:
d) Digoxin

V. In each of the following questions, two statements are given – one as Assertion (A) and the other one is Reason (R) Mark the correct answer as

Question 29.
Assertion(A): The explants are sterilized by mercuric chloride
Reason(R): Sterilization prevents the growth of other microorganisms in the Culture medium
a) (A) correct; (R) wrong
b) (A) wrong: (R) correct
c) Both (A) and (R) are correct; but (R) is not the explanation to (A)
d) Both (A) and (R) are correct; (R) is the explanation of (A)
Answer:
b) (A) wrong: (R) correct

Question 1.
What are the contributions of Haberlandt to PTC?
Answer:

Question 2.
What is the special contribution of Murashige and Skoog?
Answer:

Question 5.
What are the components of Knop’s solution?
Answer:
I. It contains various salts dissolved in Sucrose solution

Dedifferentiation :
Reversion of mature tissue into meristematic state leading to the formation of callus.

Question 8.
What is Agar?
Answer:

Question 10.
What are the minor nutrients added in MS medium?
Answer:

Question 12.
What is cybrid?
Answer:
The fusion product of a protoplast without a nucleus of different cells is called a cybrid.

Question 13.
What are the various components of MS- Medium?
Answer:

Question 14.
How to remove the cell wall of a plant cell.
Answer:
The chosen leaf tissue is immersed in the following solutions.

Question 15.
What is organogenesis?
Answer:

Question 16.
Distinguish between callus & clone
Answer:
Callus :
It is the mass of unorganized growth of plant cells or tissues in in-vitro -culture medium.

Clone :
The clone develops from callus – which gets differentiated into many plantlets known as clones (i.e) genetically uniform population.

Question 17.
What is meant by hardening?
Answer:

Question 18.
How are the syn seeds produced?
Answer:

Question 19.
Give the tabulation of a few secondary metabolites their plant sources.
Answer:

Question 20.
Give the IPR – aspects in India
Answer: 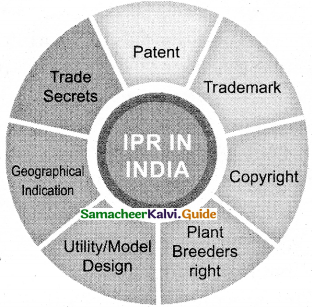 Question 23.
How is ELSI research funded?
Answer:
A percentage of the HGP – budget at the National Institute of Health & the V S Department of Energy was devoted to ELSI – research.

Question 24.
What is Biosafety?
Answer:
Biosafety is the prevention of large – scale loss of biological integrity, focusing both on ecology and human health.

Meristem culture :
The culture of plant meristematic tissue on culture media
Give the tabulation of few secondary metaboltes a their plant sources.

Question 26.
What is somatic Embryogenesis?
Answer:
Somatic embryogenesis is the formation of embryos from the callus tissue directly and these embryos are called Embryoids or from the pre-embryonic cells which differentiate into embryoids.

Question 1.
Give the name of few culture media used in PTC & their nature.
Answer:

Question 2.
Explain the Induction of Callus.
Answer:
Steps
I) Inoculation: Sterile segment of leaf, stem, tuber or root or (explant) is transferred to the sterile nutrient medium (MS – medium – + Auxins)

II) Incubation: The inoculated medium + auxins are incubated at 25 °C ± 2°C in an alternate light & dark period of 12 hours.

III) Induction of Callus:
The cell division occurs & the upper surface of the explant develop into a callus.
Callus – is a mass of unorganized growth of plant cells/tissue in-vitro – culture medium 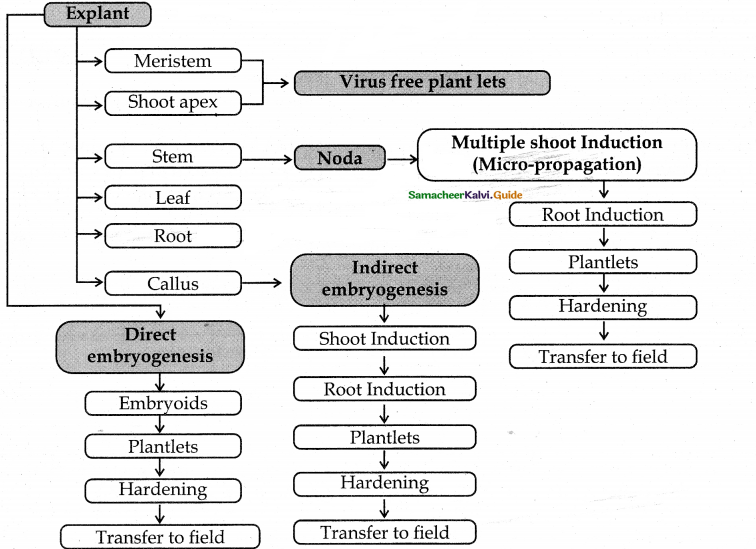 Question 4.
What are the application of somatic embrogenesis
Answer:

Question 6.
Why there is a need to produce Virus-free plants?
Answer:

Question 7.
What are the Advantages of Artificial seeds?
Answer:

Question 8.
What are the applications of plant tissue culture?
Answer:

Question 9.
Write down the protocol for the micropropagation of banana.
Answer: 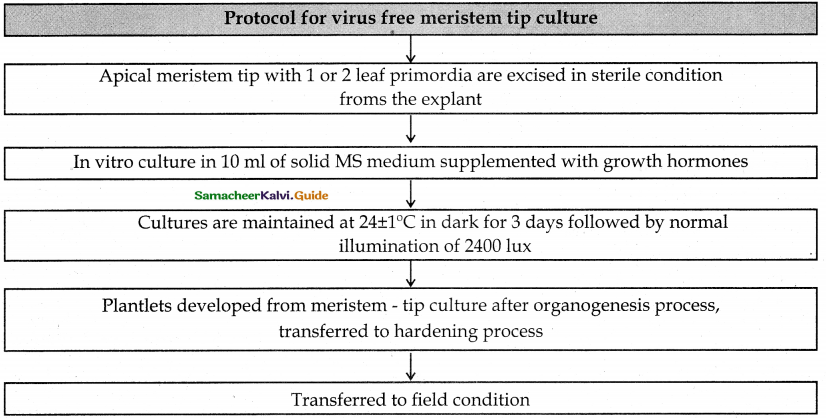 Question 11.
Which is the best conventional method to introduce disease resistance capacity into a plant? Explain.
Answer:

Question 12.
What are the 3 parts of a patent? Explain them.
Answer:
It has 3 parts

The Claim
The scope of the invention to be protected by the patent, preventing others from practicing it.

Question 13.
Write down the – general steps in patenting
Answer: 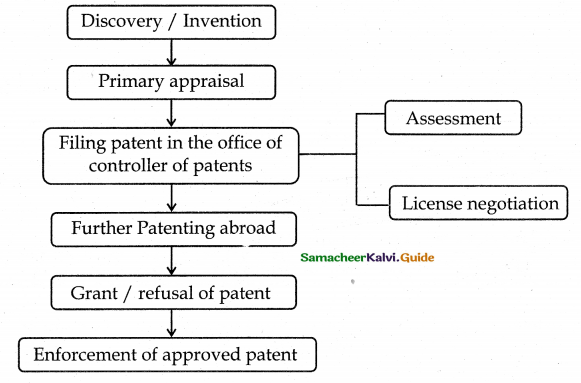 Question 14.
What is IPR? Explain the various aspects of if.
Answer:

Other Various aspects :
The above-mentioned property of the discovery should not be exploited by others without legal permission or by getting proper authorization.
Rights – must be protected by the enforcement of laws framed by a country.

Question 15.
What are the future prospects of Biotechnology?
Answer:

Question 16.
What is the function of GEAC?
Answer:

Culture facility:
Growing the plant inoculated into culture tubes at 22-280C with the illumination of light 2400 lux, with a photoperiod of 8 -16 hours and relative humidity of about 60%

Question 1.
Give the milestones in PTC – (Any 5 only)
Answer:

Question 3.
What are the needed Lab – facilities for PTC?
Answer:
Washing & drying facility (oven) for the glassware
Medium preparation room with

Question 4.
Explain various steps in Protoplast culture.
Answer:
Protoplasts are cells without a cell wall but with a cell membrane or plasma membrane.
1. Isolation of protoplast

2. Fusion of protoplast (Agglutination & Fusion)
Protoplast (A) + Protoplast (B) – fused in to one in the presence of Fusogenic agent PEG in 25 – 30% concentration (Poly Ethylene Glycol) with Ca++ ions. 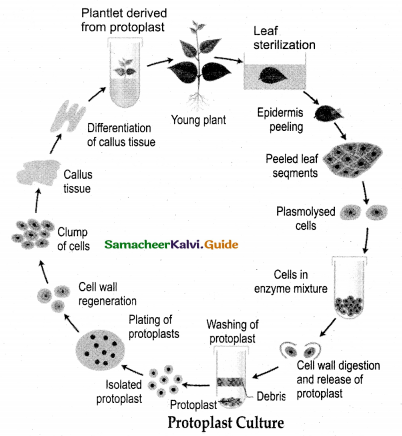 Question 5.
What is meant by biosafety? Explain.
Answer:

Question 6.
Expand ELSI & What is meant by Bioethics.
Answer:

Question 8.
List down organizations implementing Bio-safety guidelines.
Answer:
IBSCs – Institutional Bio-Safety Committees monitor the research activity at the institutional level.
RCGM – The Review Committee on Genetic manipulation, functioning in the Department of Biotechnology (DBT) monitors the risky research activities in the laboratories.
GEAC – Genetic Engineering Approval Committee
– (Ministry of Environment and Forest)
– has the power to use GMO at a commercial level and open field trials of transgenic