Question 1.
Which one of the following is not the reason for Prejudice?
(a) Socialization
(b) Economic Benefits
(c) Authoritarian personality
(d) Geography
Answer:
(d) Geography

Question 10.
As per the 2011 Census the highest literate district in Tamil Nadu
(a) Namakkal
(b) Salem
(c) Kanyakumari
(d) Sivagangai
Answer:
(c) Kanyakumari

Question 1.
What is Prejudice?
Answer:

Question 2.
What is a stereotype?
Answer:

Question 3.
What is discrimination?
Answer:

Question 4.
What are the articles that are discussing equality in the Indian constitution?
Answer:

V. Answer the following in detail

Question 1.
What are the causes of prejudice?
Answer:

Question 2.
Viswanathan Anand was born in _______
(a) Chennai
(b) Bengaluru
(c) Thiruvananthapuram
(b) Vishakapatnam
Answer:
(a) Chennai

Question 3.
What is meant by constitution?
Answer:
A constitution is a set of rules and regulations guiding the administration of a country.

Question 4.
What does Article 15(1) of our constitution state about discrimination?
Answer:
The state shall not discriminate against any citizen on grounds only of religion, race, caste, sex and place of birth or any of them.

Question 5.
What does Article 14 of our constitution state about equality?
Answer:
Article 14 provides equality before law or equal protection within the territory of India and prohibits unreasonable discrimination between persons. 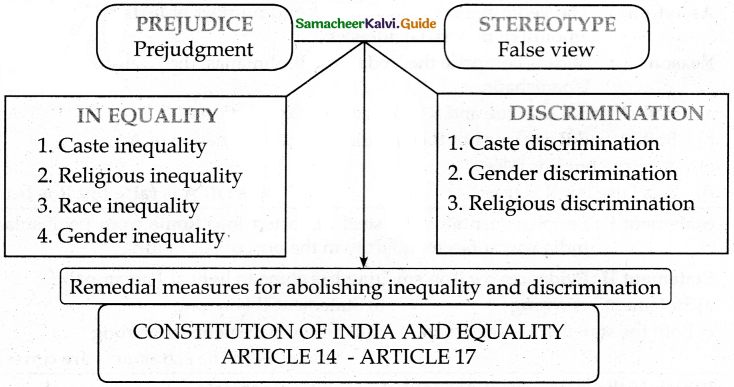