Question 8.
The continent of America was named after ______
(a) Amerigo
(b) Vespucci
(c) Vaco da Gama
(d) Hermando Cortez
Answer:
(a) Amerigo

III. Find out the correct statement:

Question 1.
(a) Martin Luther broke away from the Catholic Church because he was discriminate.
(b) John Calvin’s government in Geneva was liberal and fun-filled.
(c) King Henry VIII had deep theological differences with the Catholic Church.
(d) Council of Trent reemphasized the importance of ceremonies and significance of the mass
Answer:
(d) is correct

Question 2.
(a) Discovery of new lands and sea routes shifted the economic center from the Italian city
states to Spain and Portugal.
(b) Horses were native to America.
(c) During the beginning of the Modern Age, State did not interfere in economic activities.
(d) The Portuguese collaborated with the Arabs in its trading activities in India.
Answer:
(a) is correct

(ii) In less than fifty years after the invention of the Gutenberg printing press, about six million books had been printed.

(iii) The invention of the printing press not only spread knowledge widely but also promoted critical thinking.

Question 2.
Write a short note on the impact of the Renaissance.
Answer:

Question 3.
Outline the differences between Martin Luther with the Catholic Church.
Answer:

Question 5.
What is the Columbian Exchange?
Answer:

VI. Answer all the questions are given under each caption:

Question 1.
Renaissance
(a) Give reasons as to why the renaissance originated in the Italian city-states.
(b) Name some of the important humanists and their works.
(c) List the differences between medieval art and Renaissance art.
(d) Describe humanism.
Answer:
(a) The Italian city-states were centres of cultural activities since the fourteenth century. With the coming of the scholars and artists from Constantinople, there was a surge of enthusiasm and interest in studying classical literature and art of Greeks and Romans in the Italian city-states. This creative upsurge was reflected in their writings, art, architecture, and music. This cultural fluorescence is known as the renaissance.

(b) Important humanists – Their work

(d) Humanism laid emphasis on human dignity and nature. Renaissance humanism promoted the view that humans are endowed with attributes that are to be used to achieve greatness.

(b) He argued that it was by faith alone that one could attain salvation. He put forward the doctrine of justification by faith. The grace of God would be bestowed by the divine will alone and not by the deeds of the people.

(d) St. Ignatius Loyola founded the Society of Jesus to propagate Christianity. Its main work was through education and service to the destitute. It started a number of educational institutions, orphanages, and homes for the destitute. Soon their missionaries were present in all parts of the world to spread the Catholic religion.

(c) Many natives died because of epidemic diseases brought by the colonizers. The most dangerous weapons the natives had to encounter were the deadly diseases against which they were defenseless. It led to the near annihilation of the natives in most parts of the Americas.

Question 1.
Discuss how the Renaissance, Reformation, and Geographical discoveries heralded the modern age?
Answer:
(a) Renaissance:

Question 2.
Examine the outcome of the geographical discoveries.
Answer:
The geographical discoveries transformed the European understanding of the world. It led to the redrawing of the world map. As a result of the discovery of new lands and new sea routes, the economic centre of Europe, shifted from the Italian city-states to Spain and Portugal. Both Spain and Portugal established colonies that led to their economic prosperity.

Spanish discovery of the New World led to the conquest of Mexico and South America. The voyage of Columbus was followed by further explorations by Spanish Conquistadors (Conquerors) who defeated the natives and colonized it. They brutally killed the natives in their conquest and the remaining were employed under harsh conditions in gold and silver mines, and in plantations. The Spanish genocide of the natives included massacre, slavery, and destruction of culture. Many natives also died because of epidemic diseases brought by the colonizers.

Question 1.
In an outline map of the World, mark, the routes of
(a) Bartholomew Diaz
(b) Vasco-da-Gama
(c) Columbus
(d) Magellan
Answer: 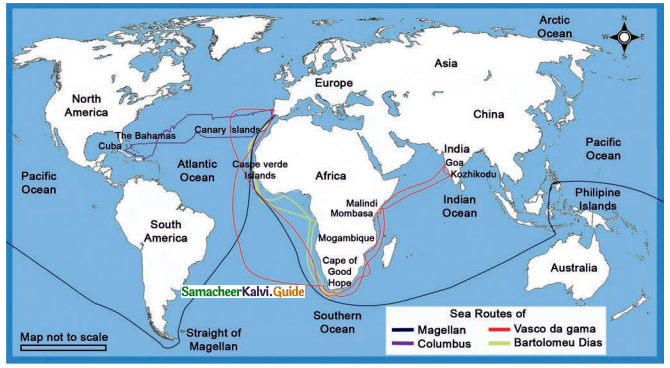 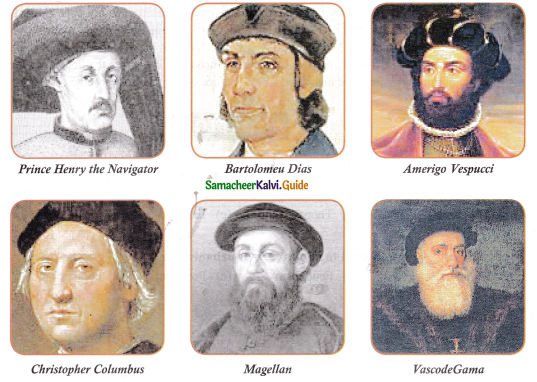 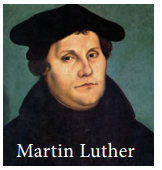 (10 November 1483 – 18 February 1546) was a German professor of theology, composer, priest, monk, and a seminal figure in the Protestant Reformation.

Luther came to reject several teachings and practices of the Roman Catholic Church. He strongly disputed the Catholic view on indulgences. Luther proposed an academic discussion of the practice and efficacy of indulgences in his Ninety-five Theses of 1517. His refusal to renounce all of his writings at the demand of Pope Leo X in 1520 and the Holy Roman Emperor Charles V at the Diet of Worms in 1521 resulted in his ex-communication by the Pope and condemnation as an outlaw by the Holy Roman Emperor.

Luther taught that salvation and, consequently, eternal life are not earned by good deeds but are received only as the free gift of God’s grace through the believer’s faith in Jesus Christ as redeemer from sin. His theology challenged the authority and office of the Pope by teaching that the Bible is the only source of divinely revealed knowledge from God.

Those who identify with Luther’s wider teachings are called Lutherans, though Luther insisted on Christian or Evangelical as the only acceptable names for individuals who professed Christ.

His translation of the Bible into the German vernacular (instead of Latin) made it more accessible to the laity, an event that had a tremendous impact on both the church and German culture. His hymns influenced the development of singing in Protestant churches. His marriage to Katharina von Bora, a former nun, set a model for the practice of clerical marriage, allowing Protestant clergy to marry.

In two of his later works, Luther expressed antagonistic views towards Jews. His rhetoric was not alone directed at Jews, but also towards Roman Catholics (whom Protestants labeled “Papists”), Anabaptists, and non-trinitarian Christians.

Martin Luther died in 1546, with his decree of ex-communication by Pope Leo X still effective. On his deathbed, Luther was asked: “Are you ready to die trusting in your Lord Jesus Christ and to confess the doctrine which you have taught in his name?” He answered “Yes”, before taking his final breath.

Question 2.
The decline of ______ helped to move towards urbanisation.
(a) Trade
(b) Feudalism
(c) Freedom
(d) Population
Answer:
(b) Feudalism

Question 5.
A mathematical model of revolution of the earth was presented by _____
(a) Galileo
(b) Copernicus
(c) Ptolemy
(d) Euclid
Answer:
(b) Copernicus

III. Find out the correct statement:

Question 1.
(a) Prince Henry’s Navigation school heralded the dawn of the modern era.
(b) The modern Era witnessed scientific progress.
(c) The Roman Church became very strong in the Modern Era
(d) Feudalism encouraged urbanisation.
Answer:
(a) and (b) are correct

Question 2.
(a) The invention of the press suppressed the growth of Science.
(b) The idea of humanism was first expressed in literature.
(c) Renaissance paintings were unrealistic and two dimensional.
(d) Renaissance supported the corruption and worldly practices of the Church
Answer:
(b) is correct

Question 3.
(a) Inquisition was an institution of the Protestant Church.
(b) Calvin of Geneva followed Martin Luther.
(c) The travel accounts of Marco Polo and Ibn Battuta kindled the curiosity to explore.
(d) The sailors of Prince Henry explored the east coast of Africa.
Answer:
(b) and (c) are correct

Question 4.
(a) A German cartographer named the New World after Amerigo Vespucci.
(b) Cochin was the headquarters of the Portugal empire in the East.
(c) Since the sea was calm it was named as the Pacific Ocean by Columbus.
(d) Maize was introduced into Europe from America.
Answer:
(a) and (d) are correct

Question 1.
What about the origin of the word Renaissance?
Answer:

Question 2.
What subjects were taught in Italian universities?
Answer:

Question 5.
Write a note on

Question 6.
Bring out the main features of India at the dawn of the Modern Age in Europe.
Answer:

VI. Answer all questions given under the heading

(b) What did the Arabs bring?
Answer:
The Arabs brought spices from the east and then transported them by land to the ports of the Mediterranean region.

(d) What were the new ideas born in this Context?
Answer:
In this context, new ideas leading to the Renaissance, Reformation, and Exploration through sea voyages were bom.

Question 2.
The invention of the Printing Press
(a) How were the manuscripts written earlier?
Answer:
Earlier, manuscripts were written by hand on animal skin called vellum. Only the privileged few could access them.

(c) How was this invention useful?
Answer:
The printing press enabled the production of multiple copies of a manuscript and their spread all over Western Europe.

(d) Apart from spreading knowledge, what was promoted by this invention?
Answer:
The invention not only spread knowledge widely but also promoted critical thinking.

(b) What was the result?
Answer:
This acted as a catalyst for the birth of the Renaissance. It also led to the discovery of new land routes.

(d) What was promoted by them?
Answer:
Under the Renaissance artists portrayed natural landscapes, human anatomy, emotions, and ideas.

(b) In the field of art give the contribution of Leonardo da Vinci.
Answer:
Leonardo da Vinci was a versatile genius. He was a painter, sculptor, architect, military engineer, anatomist, and poet. His paintings of Mona Lisa, the Last Supper, and The Virgin on the Rocks are illustrious examples of his talent.

(c) Contribution of Michelangelo.
Answer:
Michelangelo was a painter, sculptor, architect and poet. His marble sculpture of David depicts the youthful strength and energy of the giant slayer. He is also famous for his paintings on the ceilings of the Sistine Chapel in Rome.

(d) Contribution of Raphael.
Answer:
Raphael painted beautiful Madonnas (Virgin and the Child). His painting of the School of Athens reveals the ideological debate of his times, namely, the conflict between spiritualism and humanism.

Question 5.
Science during the Renaissance
(a) Who inspired the advances in Science?
Answer:
The advances in science were inspired by Ptolemy, Archimedes, Euclid and others.

(b) What was proved by Copernicus?
Answer:
Copernicus proved that earth revolved around the sun through a mathematical model.

(c) What was the contribution of Galileo?
Answer:
Galileo proved further astronomical proof with the aid of the telescope he invented.

(d) What role was played by the Church in the field of science?
Answer:
The Church continued to prevent the growth of science as it undermined its importance.

Question 6.
Martin Luther:
(a) Who was Martin Luther?
Answer:
Martin Luther, a monk of the Augustinian Order and a Professor of Theology in the University of Wittenberg. He was a devout Christian and a scrupulous follower of the Catholic faith.

(b) Why did Pope Leo X excommunicate him?
Answer:
Luther wrote a pamphlet against the sale of indulgences, sale of offices and other corrupt practices. He listed out ninety-five points and pasted them on the Church door. When he refused to withdraw his criticisms, Pope Leo X issued a Papal Bull excommunicating him.

(b) Where did he reach in Africa?
Answer:
He reached the Cape of Good Hope in Africa.

(d) Why was Vasco da Gama astounded?
Answer:
At Calicut, Vasco da Gama was astounded to find pepper and other spices, a precious commodity in Portugal, available at low prices.

(c) What were sent from Europe?
Answer:
From, Europe, sugarcane, wheat, rice, horses, cattle, sheep, and goats were sent to America.

(d) Why were slaves imported from Africa?
Answer:
The mass extinction of the native population led to the import of slaves from Africa. The Gambia, Senegal, Goree, El Mina, and Congo became important centres of the slave trade in Africa.