Question 9.
What is mycorrhiza?
Answer:
The symbiotic association between fungal mycelium and roots of plants is called as mycorrhiza.

Question 12.
How vacuoles helps to maintain the structure of a plant cell?
Answer:
The major function of plant vacuole is to maintain water pressure known as turgor pressure, which maintains the plant structure.

Question 14.
How will you define Quantasomes?
Answer:
Quantasomes are the morphological expression of physiological photosynthetic units, located on the inner membrane of thylakoid lamellae.

Question 16.
“Roots perform photosynthesis”-Justify with example?
Answer:
Roots of some climbing or epiphytic plants develop chlorophyll and turn green which help in photosynthesis. These roots are called as photosynthetic roots, e.g,,Tinospora. 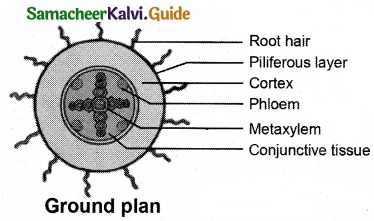 Question 19.
What do you mean by Respiratory substrate? Give example?
Answer:
Respiration is a biological process in which oxidation of various food substances like carbohydrates, proteins and fats take place and as a result of this, energy is produced where O2 is taken in and CO2 is liberated. The organic substances which are oxidised during respiration are called respiratory substrates.

Question 20.
Define phyllotaxy. Explain its type?
Answer:
The mode of arrangement of leaves on the stem is known as phyllotaxy (Greek. Phyllon = leaf; taxis = arrangement). Phyllotaxy is to avoid over crowding of leaves and expose the leaves maximum to the sunlight for photosynthesis. The four main types of phyllotaxy are:

1. Alternate phyllotaxy:
In this type there is only one leaf per node and the leaves on the successive nodes are arranged alternate to each other. Spiral arrangement of leaves show vertical rows are called orthostichies. They are two types:

2. Opposite phyllotaxy:
In this type each node possess two leaves opposite to each other. They are organized in two different types:

(I) Opposite superposed:
The pair of leaves arranged in succession are in the same direction, that is two opposite leaves at a node lie exactly above those at the lower node, e.g., Psidium (Guava), Eugenia jambolana (Jamun) and Quisqualis (Rangoon creeper).

(II) Opposite decussate:
In this type of phyllotaxy one pair of leaves is placed at right angles to the next upper or lower pair of leaves, e.g., Calotropis, Zinnia and Ocimum

3. Ternate phyllotaxy:
In this type there are three leaves attached at each node, e.g., Nerium.

4. Whorled (verticillate) type of phyllotaxy:
In this type more than three leaves are present in a whorl at each node forming a circle or whorl, e.g., Allamanda and Alstonia scholaris.

Distinguish between prokaryotes and eukaryotes?
Answer: 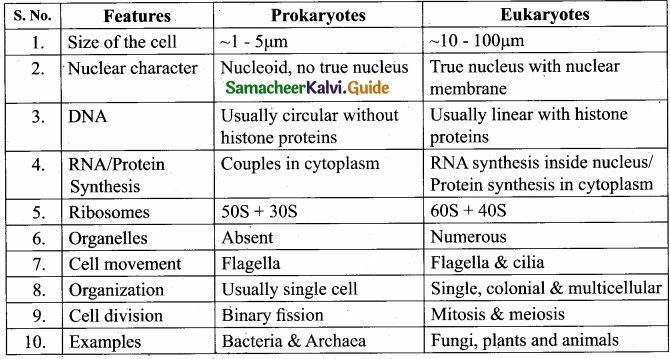 1. Nepenthes (Pitcher plant):
Pitcher is a modified leaf and contains digestive enzymes. Rim of the pitcher is provided with nectar glands and acts as an attractive lid. When insect is trapped, proteolytic enzymes will digest the insect.

2. Drosera (Sundew):
It consists of long club shaped tentacles which secrete sticky digestive fluid which looks like a sundew.

3. Utricularia (Bladder wort):
Submerged plant in which leaf is modified into a bladder to collect insect in water.

4. Dionaea (Venus fly trap):
Leaf of this plant modified into a colourful trap. Two folds of lamina consist of sensitive trigger hairs and when insects touch the hairs it will close.

List out the physiological effects of Abscissic acid?
Answer:

Question 10.
Define indigestion?
Answer:
Indigestion is the digestive disorder in which the food is not properly digested leading to a feeling of fullness of stomach.

Question 11.
Write about muscle fatigue?
Answer:
Muscle fatigue is the inability of a muscle to contract after repeated muscle contractions. This is due to lack of ATP ancl accumulation of lactic acid by anaerobic breakdown of glucose.

Question 13.
Draw and label the parts of LS of kidney?
Answer: 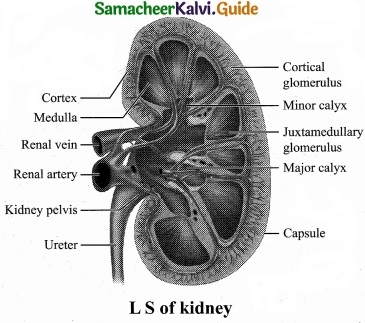 Question 14.
What are the functions of glucagon?
Answer:
Glucagon is a polypeptide hormone. It is a potent hyperglycaemic hormone that acts on the liver and promotes the breakdown of glycogen to glucose (Glycogenolysis), synthesis of glucose from lactic acid and from non-carbohydrate molecules (gluconeogenesis).

Releases glucose from the liver cells, increasing the blood glucose levels. Since glucagon reduces the cellular uptake and utilisation of glucose it is called a hyperglycemic hormone. Prolonged hyperglycemia leads to the disorder called diabetes mellitus.

Question 15.
Bioluminence is advantageous to ctenophores?
Answer:
Ctenophores are exclusively marine. They emit light. It helps the animals in finding food, mate and excape from the predators.

Question 16.
How do earthworms breathe?
Answer:
In earthworms, respiration takes place through the body wall by the moist skin diffusion, oxygen diffuses through the skin into the blood while carbon dioxide from the blood diffuse out.

Question 17.
What is Vermicompost?
Answer:
Vermicompost is the compost produced by the action of earthworms in association with all other organisms in the compost unit.

Question 19.
Draw the graph of a normal ECG?
Answer: 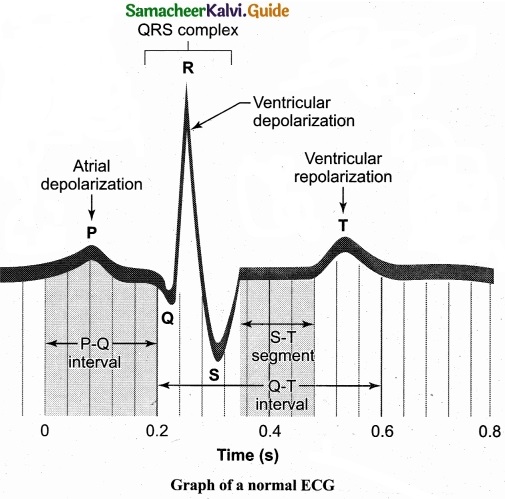 Write an essay on digestion of food and role of digestive enzymes?
Answer:
The process of digestion converts the solid food into absorbable and assimilable forms. This is accomplished by mechanical and chemical processes.

Digestion in the buccal cavity:
The smell, sight and taste as well as the mechanical stimulation of food in the mouth, triggers a reflex action which results in the secretion of saliva. The mecnanical digestion starts in the mouth by grinding and chewing of food.

The mucus in saliva prepares the food for swallowing by moistening, softening, lubricating and adhering the masticated food into a bolus. About 30 percent of polysaccharide, starch is hydrolyzed by the salivary amylase enzyme into disaccharides (maltose).

Digestion in the stomach:
Food remains in the stomach for 4 to 5 hours, the rhythmic peristaltic movement churns and mixes the food with gastric juice and make it into a creamy liquid called chyme. The gastric secretion is partly controlled by autonomic reflexes. The secretion of gastric juice begins when the food is in the mouth.

The gastric juice contains HCl and proefizymes. The proenzyme pepsinogen, on exposure to HCl gets converted into the active enzyme pepsin which converts proteins into proteoses and peptones (peptides). The HCl provides an acidic medium (pH 1.8) which is optimum for pepsin, kills bacteria and other harmful organisms and avoids putrifaction.

The mucus and bicarbonates present in the gastric juice play an important role in lubrication and protection of the mucosal epithelium from the eroding nature of the highly acidic HCl. Another proteolytic enzyme found in gastric juice of infants is rennin helps in the digestion of milk protein, caseinogen to casein in the presence of calcium ions.

The hile contains bile pigments (bilirubin and biliverdin) as the break down products of hemoglobin of dead RBCs, bile salts, cholesterol and phospholipids but has no enzymes. Bile helps in emulsification of fats. Bile salts reduce the surface tension of fat droplets and break them into small globules. Bile also activates lipases to digest lipids.

Proteins and partially digested proteins in the chyme on reaching the intestine are acted upon by the proteolytic enzymes of pancreatic juice. Trypsin hydrolyses proteins into polypeptides and peptones, while chymotrypsin hydrolyses peptide bonds associated with specific amino acids.

The mucus along with the bicarbonate ions from the pancreas provides an alkaline medium (pH 7.8) for the enzymatic action. As a result of digestion, all macromolecules of food are converted into their corresponding monomeric units.

The simple substances thus formed are absorbed in the jejunum and ileum region of the small intestine. The undigested and unabsorbed substances are propelled into the large intestine.

Amoeboid movement:
Cells such as macrophages exhibit amoeboid movement for engulfing pathogens by pseudopodia formed by the streaming movement of the cytoplasm. Ciliary movement – This type of movement occurs in the respiratory passages and genital tracts which are lined by ciliated epithelial cells.

Muscular movement:
The movement of hands, legs, jaws, tongue are caused by the contraction and relaxation of the muscle which is termed as the muscular movement.

What are the major hypothalamic hormones and also explain their functions?
Answer: