Question 4.
The correct order of increasing oxidizing power in the series

Hint: In diamond carbon forming fee. Carbon occupies comers and face centres and also occupying half of the tetrahedral voids. 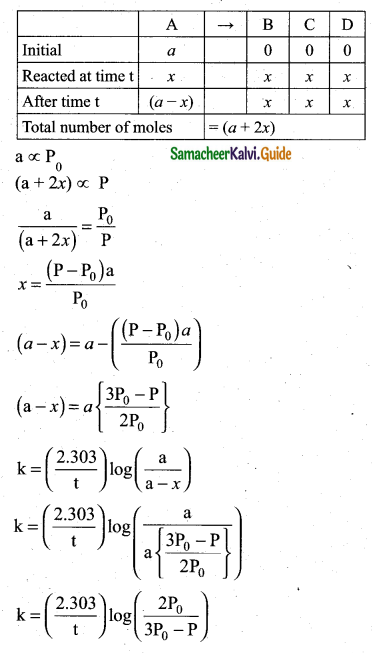 Question 15.
An example of antifertility drug is
(a) novestrol
(b) seldane
(c) salvarsan
(d) Chloramphenicol
Answer:
(a) novestrol

Question 21.
Write a note about Helmoholtz double layer.
Answer:
The surface of a colloidal particle adsorbs one type of ion due to preferential adsorption. This layer attracts the oppositely charged ions in the medium and hence the boundary separating the two electrical double layers are set up. This is called Helmholtz electrical double layer. As the particles nearby are having similar charges, they cannot come close and condense. Hence this helps to explain the stability of the colloid. 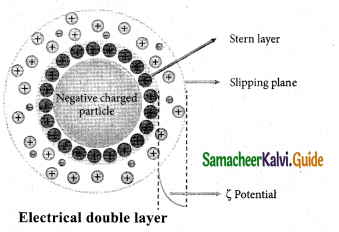 Question 24.
What are food preservatives?
Answer:
Food preservatives are chemical substances are capable of inhibiting, retarding or arresting the process of fermentation, acidification or other decomposition of food by growth of micro organisms.
Examples:

Question 25.
Explain the principle of electrolytic refining with an example.
Answer:
The crude metal is refined by electrolysis. It is carried out in an electrolytic cell containing aqueous solution of the salts of the metal of interest. The rods of impure metal are used as anode and thin strips of pure metal are used as cathode. The metal of interest dissolves from the anode, pass into the solution while the same amount of metal ions from the solution will be deposited at the cathode. During electrolysis, the less electropositive impurities in the anode, settle down at the bottom and are removed as anode mud.
Let us understand this process by considering electrolytic refining of silver as an example.
Cathode: Pure silver
Anode: Impure silver rods

During electrolysis, at the anode the silver atoms lose electrons and enter the solution. The positively charged silver cations migrate towards the cathode and get discharged by gaining electrons and deposited on the cathode. Other metals such as copper, zinc etc.,can also be refined by this process in a similar manner.

Question 26.
How will you prepare phosphine and explain the purification of phosphine?
Phosphine’is prepared by action of sodium hydroxide with white phosphorous in an inert atmosphere of carbon dioxide or hydrogen.

Phosphine is freed from phosphine dihydride (P2H4) by passing through a freezing mixture. The dihydride condenses while phosphine does not.
Phosphine can also prepared by the hydrolysis of metallic phosphides with water or dilute mineral acids.

Phosphine is prepared in pure form by heating phosphorous acid.

A pure sample of phosphine is prepared by heating phosphonium iodide with caustic soda S0lution.

Question 27.
Justify the position of lanthanides and actinides in the periodic table.
Answer:
(i) In sixth period after lanthanum, the electrons are preferentially filled in inner 4f sub shell and these 14 elements following lanthanum show similar chemical properties. Therefore these elements are grouped together and placed at the bottom of the periodic table. This position can be justified as follows.
(a) Lanthanoids have general electronic configuration [Xe] 4f2 14 5d° 1 6s2
(b) The common oxidation state of lanthanoids is +3
(c) All these elements have similar physical and chemical properties.

(iv) Hence a separate position is provided to the inner transition elements at the bottom of the periodic table.

Question 29.
What are the merits and limitations of the intermediate compound theory?
Answer:
Merits:
(i) The specificity of a catalyst
(ii) The increase in the rate of the reaction with increase in the concentration of catalyst.

Question 30.
Write a note on sacrificial protection.
Answer:
In this method, the metallic structure to be protected is made cathode by connecting it with more active metal (anodic metal). So that all the corrosion will concentrate only on the active metal. The artificially made anode thus gradually gets corroded protecting the original metallic structure. Hence this process is otherwise known as sacrificial anodic protection.
Al, Zn and Mg are used as sacrificial anodes.

Question 31.
1mole of Hlis allowed to react with t-butyl methylether. Identify the product and write down the mechanism of the reaction.
Answer: 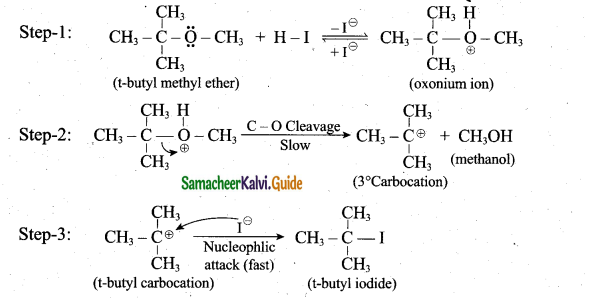 Question 32.
How will you prove the presence of aldehyde group in glucose?
Answer:
(i) Glucose is oxidised to gluconic acid with ammoniacal silver nitrate (Tollen’s reagent) and alkaline copper sulphate (Fehling’s solution). Tollen’s reagent is reduced to metallic silver and Fehling’s solution to cuprous oxide (red precipitate). These reactions confirm the presence of an aldehye group in glucose. 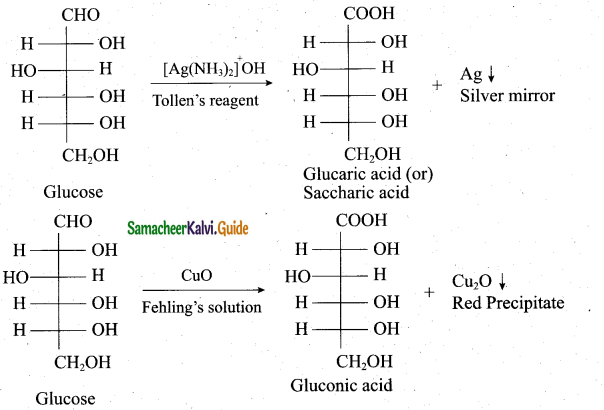 Question 33.
Explain about anaesthetics with their types.
(i) Local anaesthetics: It causes loss of sensation in the area in which it is applied without losing consciousness. They block pain perception that is transmitted via peripheral nerve fibres to the brain.
Example: Procaine, Li do caine.
They are often used during minor surgical procedures.

(ii) General anaesthetics: They cause a controlled and reversible loss of consciousness by affecting central nervous system.
Example: Propofol, Isoflurane.
They are often used for major surgical procedures.

Question 34.
(a) (i) CO is more stable at higher temperature. Why? (2)
(ii) How will you prepare potash alum? (3)
[OR]
(b) (i) Give the balanced equation for the reaction between chlorine with cold NaOH. (3)
(ii) Nitrogen exists as diatomic molecule and Phosphrus as P4 Why? (2)
Answer:
(a) (i) In the Ellingham diagram, the formation of carbon monoxide is a straight line with negative slope. In this case AS is positive as 2 moles of CO gas is formed by the consumption of one mole of oxygen. Hence, CO is more stable at higher temperature.

(ii) The alunite the alum stone is the naturally occurring form and it is K2SO4 . Al2(S04)3.4Al(0H)3. When alum stone is treated with excess of sulphuric acid, the aluminium hydroxide is converted to aluminium sulphate. A calculated quality of – potassium sulphate is added and the solution is crystallised to generate potash alum. It is purified by recrystallisation.

Chlorine reacts with cold NaOH to give sodium chloride and sodium hypochlorite.

(ii) Nitrogen has a triple bond between its two atoms because of its small size and high electronegativity. Phosphorus P4 has single bond, that is why it is tetra-atomic.

Question 35.
(a) (i) Discuss the ortho and pyro silicates. (2)
(ii) Compare lanthanides and actinides. (3)
[OR]
(b) (i) Ni2+ is identified using alcoholic solution of dimethyl glyoxime. Write the structural formula for the rosy red precipitate of a complex formed in the reaction. (3)
Cu+, Zn2+, Sc3+, Ti4+ are colourless. Prove this statement. (2)
Answer:
Ortho silicates: The simplest silicates which contain discrete [SiO4]4- tetrahedral units are called ortho silicates or neso silicates.

tetrahedral units by sharing one oxygen atom at one comer, (one oxygen is removed while joining). Example: Thortveitite – Sc2Si2O7

(b) (i) Ni2+ ions present in Nickel chloride solution is estimated accurately for forming an insoluble complex called [Ni(DMG)2]
Nickel ion reacts with alcoholic solution of DMG in the presence of ammonical medium, to give rosy red precipitate of [Ni(DMG)2] complex.

(ii) 1. Cu+, Zn2+ have d10 configuration and Sc3+, Ti4+have d1 configuration.
2. d-d transition is not possible in the above complexes. So they are colourless.

(b) (i) Explain about the hydrolysis of salt of strong base and weak acid. Derive the value of Kh for that reaction. (3)
(ii) Identify the Lewis acid and the Lewis base in the following reactions. (2)

Answer:
(a) (i) 1. Let us consider the reaction between sodium hydroxide and acetic acid to give sodium acetate and water

2. Coordination number of atoms in a bcc structure is 8

(b) (i) 1. Coordination number: The number of nearest neighbours that surrounding a particle in a crystal is called the coordination number of that particle.
2. In aqueous solution, CH3COONa is completely dissociated as follows.
CH3COONa(aq), →  CH3COO–(aq) + Na+(aq)

3. CH3COO– is a conjugate base of the weak acid CHCOOH and it has a tendency to react with H+ from water to produce unionised acid. But there is no such tendency
for Na+ to react with OH–

such cases, the solution is basic due to the hydrolysis and pH is greater than 7.

5. Relationship between equilibrium constant, hydrolysis constant and the dissociation constant of acid is derived as follows: 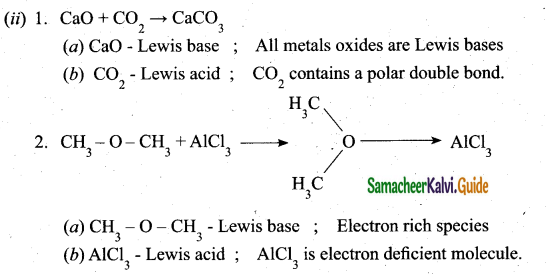 (ii) 1. The substances when added to a catalysed reaction decreases or completely destroys the activity of a catalyst are often known as catalytic poisons.
2. In the reaction 2SO2 + O2 → 2SO3 with Pt catalyst, the catalyst poison is AS2O3

(b) (i) 1. Substances like AgCl, PbS04 are sparingly soluble in water. The solubility product can be determined using conductivity experiments.
2. Let us consider AgCl as an example
Agci(s)) ⇌ Ag+ + Cl–
KSp = [Ag +] [Cl–]

(ii) 1. Formic acid contains both an aldehyde as well as an acid group. Hence, like other aldehydes, formic acid can easily be oxidised and therefore acts as a strong reducing agent.

Question 38.
(a) (i) What are the uses of nitrobenzene? (2)
(ii) Write a note on formation of -helix. (3)
[OR]
(b) (i) Define TFM value. (2)
(ii) Differentiate thermoplastic and thermosetting. (3)
Answer:
(a) (i) 1. Nitro benzene is used to produce lubricating oils in motors and machinery.
2. It is used in the manufacture of dyes, drugs, pesticides, synthelic rubber, aniline and explosives like TNT, TNB.
(ii) 1. In the a-helix sub-structure, the aminoacids are arranged in a right handed helical (spiral) structure and are stabilised by the hydrogen bond between the carbonyl oxygen one aminoacid (nth residue) with amino hydrogen of the fifth residue (n+4th residue).

2. The side chains of the residues protrude outside of the helix. Each turn of an a-helix contains about 3.6 residues and is about 5.4 A long.

3. The amino acid pro line produces a line in the helical structure and often called as a helical breaker due to its rigid cyclic structure.

4. Many fibrous proteins such as a-Keratin in hair, nails, wool, skin and myosin in muscles have a-helix structure. Stretching property of human hair is due to the helical structure of a-keratin in hair.

(b) (i) 1. The quality of a soap is described in terms of total fatty matter (TFM value). It is defined as the total amount of fatty matter that can be separated from a sample after spliting with mineral acids. Higher the TFM value in the soap, better is its quality.
2. As per BIS standards, Grade I soaps should have 76% minimum TFM value (ii) Difference between thermoplastic and thermosetting: