Question 6.
Match the following and choose the correct answer by using codes given below:

Question 9.
……….. defines “Full employment as that level of employment at which any further increase in spending would resort in an inflationary spiral of wages and prices”
(a) Lerner
(b) J.M. Keynes
(c) J.B. Say
(d) Adam Smith
Answer:
(a) Lerner

Question 24.
What is the meaning of trade cycle?
Answer:
Meaning of Trade Cycle
A Trade cycle refers to oscillations in aggregate economic activity particularly in employment, output, income, etc. It is due to the inherent contraction and expansion of the elements which energize the economic activities of the nation. The fluctuations are periodical, differing in intensity and changing in its coverage.

Question 26.
What is credit creation?
Answer:
Credit Creation means the multiplication of loans and advances. Commercial banks receive deposits from the public and use these deposits to give loans: However, loans offered are many times more than the deposits received by banks. This function of banks is known as ‘Credit Creation’.

Question 28.
What is Secular Disequilibrium?
Answer:
Secular Disequilibrium: The secular or long-run disequilibrium in BOP occurs because of long-run and deep seated changes in an economy as it advances from one stage of growth to another. In the initial stages of development, domestic investment exceeds domestic savings and imports exceed exports, as it happens in India since 1951.

Question 31.
Enumerate the features of mixed economy.
Answer:
Features of Mixed Economy:
1. Ownership of Property and Means of Production: The means of production and properties are owned by both private and public. Public and Private have the right to purchase, use or transfer their resources.

2. Coexistence of Public and Private Sectors: In mixed economies, both private and public sectors coexist. Private industries undertake activities primarily for profit. Public sector firms are owned by the government with a view to maximize social welfare.

3. Economic Planning: The central planning authority prepares the economic plAnswer: National plans are drawn up by the Government and both private and public sectors abide. In general, all sectors of the economy function according to the objectives, priorities and targets laid down in the plan.

4. Solution to Economic Problems: The basic problems of what to produce, how to produce, for whom to produce and how to distribute are solved through the price mechanism as well as state intervention.

5. Freedom and Control: Though private has freedom to own resources, produce goods and services and distribute the same, the overall control on the economic activities rests with the government.

Question 32.
What is the solution to the problem of double counting in the estimation of national income?
Answer:

Question 34.
Discuss the estimating the national income through the Income Method precautions.
Answer:

Question 35.
Specify the limitations of the multiplier.
Answer:

Question 38.
What is the meaning of Crypto currency?
Answer:
Crypto Currency:
A digital currency in which encryption techniques are used to regulate the generation of units of currency and verify the transfer of funds, operating independently of a Central Bank,

Decentralised crypto currencies such as Bitcoin now provide an outlet for Personal Wealth that is beyond restriction and confiscation.

Question 41 (a).
Explain the Aggregate Demand Function with Diagram.
Answer:
In the Keynesian model, output is determined mainly by aggregate demand. The aggregate demand is the amount of money which entrepreneurs expect to get by selling the output produced by the number of labourers employed.

Therefore, it is the expected income or revenue from the sale of output at different levels of employment.
Aggregate demand has the following four components:

The desired or planned demand (spending) is the amount that households, firms, the governments and the foreign purchasers would like to spend on domestic output. 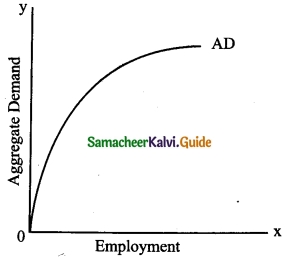 In other words, desired demand in the economy is the sum total of desired private consumption expenditure, desired investment expenditure, desired government spending and desired net exports (difference between exports and imports). Thus, the desired spending is called aggregate spending (demand), and can be expressed as:
AD = C + I + G + (X – M)
The diagram explains that aggregate demand price increases or decreases with an increase or decrease in the volume of employment. Aggregate demand curve increases at an increasing rate in the beginning and then increases at a decreasing rate.

This shows that as income increases owing to increase in employment, expenditure of the economy increases at a decreasing rate.

(b) Describe the Effective demand.
Answer:

(b) Explain about Marginal Efficiency of Capital [MEC] short run factors and long run factors.
Answer:
(a) Short – Run Factors
(i) Demand for the product:

(v) Waves of optimism and pessimism:

(b) Long – Run Factors
The long run factors which influence the marginal efficiency of capital are as follows:
(i) Rate of growth of population:

(iii) Monetary and Fiscal policies:
Cheap money policy and liberal tax policy pave the way for greater profit margin and so MEC is likely to be high.

Question 43 (a).
Briefly explain the Monetary Economics and money.
Answer:
Monetary Economics is a branch of economics that provides a framework for analyzing money and its functions as a medium of exchange, store of value and unit of account. It examines the effects of monetary systems including regulation of money and associated financial institutions.

Question 44 (a).
What do you mean by balance of payments?
Answer:
Balance of Payments (BOP):
1. BoP is a systematic record of a country’s economic and financial transactions with the rest of the world over a period of time.

3. The principal items shown on the credit side are exports of goods and services, transfer receipts in the form of gift etc., from foreigners, borrowing from abroad, foreign direct investment and official sale of reserve assets including gold to foreign countries and international agencies.

1. Net Barter Terms of Trade:
This type was developed by Taussig in 1927. The ratio between the prices of exports and of imports is called the “net barter terms of trade’. It is named by Viner as the ‘commodity terms of trade’.
It is expressed as:
Tn = (Px / Pm) × 100
Where,
Tn = Net Barter Terms of Trade
Px = Index number of export prices
Pm = Index number of import prices
This is used to measure the gain from international trade. If ‘Tn’ is greater than 100, then it is a favourable terms of trade which will mean that for a rupee of export, more of imports can be received by a country.

2. Principle of Equity:
From the point of view of equity, the resources should be distributed among the different states so that each state receives a fair share of revenue.

3. Principle of Uniformity:
In a federal system, each state should contribute equal tax payments for federal finance.

4. Principle of Adequacy of Resources:

6. Principle of Integration and coordination:

9. Principle of Accountability:
Each Government should be accountable to its own legislature for its financial decisions i.e. the Central to the Parliament and the State to the Assembly.

Question 47 (a).
What are the similarities of Public and Private Finance?
Answer:
(i) Rationality: