Students get through the TN Board 11th Bio Botany Important Questions Chapter 6 Cell: The Unit of Life which is useful for their exam preparation.

Question 3.
What is the main use of TEM?
Answer:
This is the most commonly used electron microscope that provides two-dimensional images. The components of the microscope are as follows: (i) Electron Generating System, (ii) Electron Condenser, (Hi) Specimen Objective, (iv) Tube Lens, (v) Projector. It is used for studying the detailed structure of viruses, mycoplasma, cellular organelles, etc.

Question 4.
List out the name of microscopes in which the light of illumination is visible light.
Answer:
Light Microscope, Darkfield Microscopy, Phase contrast Microscope.

Question 5.
What are the constituents of protoplasm?
Answer:
It is primarily made of water contents and various other solutes of biological importance such as glucose,fatty acids, amino acids, minerals,vitamins, hormones and enzyme.

Question 6.
Define cohesiveness of protoplasm.
Answer:
Particles or molecules of protoplasm are adhered with each other by forces, such as Vander Waal’s bonds, that hold long chains of molecules together.

Question 9.
Explain primary cell wall.
Answer:
It is the first layer of inner to middle lamellae, primarily consisting of a loose network of cellulose microfibrils in a gel matrix. It is thin, elastic, and extensible.

Question 10.
How does a ‘glycocalyx’ form?
Answer:
The Carbohydrate molecules of the cell membrane are short-chain polysaccharides. These are either bound with ‘glycoproteins’ or ‘glycolipids’ and form a glycocalyx.

Question 11.
Define Endocytosis and exocytosis.
Answer:
Cell surface membranes are able to transport individual molecules and ions. There are processes in which a cell can transport a large number of solids and liquids into the cell (endocytosis) or out of the cell (exocytosis).

Question 12.
What do you understand by the term phagocytosis?
Answer:
The particle is engulfed by a membrane, which folds around it and forms a vesicle. The enzymes digest the material and products are absorbed by cytoplasm.

Question 13.
Define cristae of mitochondria.
Answer:
The inner membrane is convoluted (infoldings), called the crista (plural: cristae). Cristae contain most of the enzymes for the electron transport system.

Question 16.
What are Glyoxysomes?
Answer:
Glyoxysome is a single membrane-bound organelle. It is a sub-cellular organelle and contains enzymes of glyoxylate pathway, fi-oxidation of fatty acid occurs in glyoxysomes of germinating seeds, eg. Castor seeds.

Question 17.
What is the main function of .plant vacuoles?
Answer:
The major function of plant vacuole is to maintain water pressure known as turgor pressure, which maintains the plant structure. Vacuoles organize themselves into a storage/sequestration compartment.

Question 2.
Explain the principle and function of a scanning electron microscope.
Answer:

Question 3.
Enumerate the functions of the cell wall.
Answer:

Question 4.
What do you know about signal transduction in cells? Explain briefly.
Answer:

Question 5.
List out the functions of Golgi bodies.
Answer:

Question 6.
How do the grana in chloroplast form? Mention their structure and function.
Answer:

Question 7.
Explain the types of chromosomes based on the position of the centromere.
Answer: 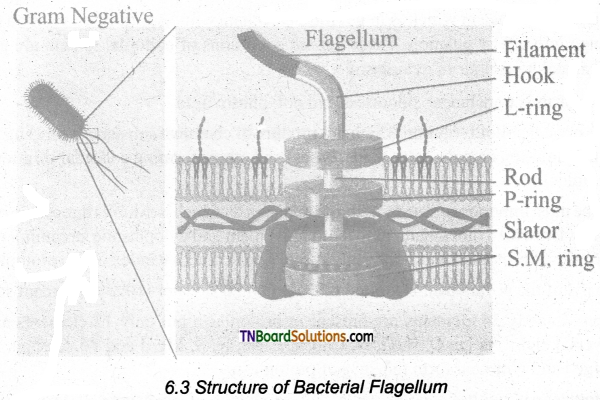 Question 9.
Explain the structure and function of Cilia.
Answer: 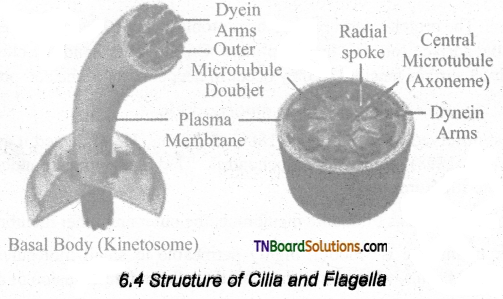 Cilia (plural) are short cellular, numerous microtubule bound projections of the plasma membrane.
Cilium (singular) is a membrane-bound structure made up of basal body, rootlets, basal plate, and shaft. The shaft or axoneme consists of nine pairs of microtubule doublets, arranged in a circle along the die periphery with two central tubules, (9 + 2) arrangement of microtubules is present. Microtubules are made up of tubulin. The motor protein dynein connects the outer microtubule pair and links them to the central pair. Nexin links the peripheral doublets of microtubules.

Question 1.
Enumerate the physical properties of protoplasm.
Answer:
Physical Properties of Protoplasm: The protoplasm exists either in a semisolid (jelly-like) state called ‘gel’ due to suspended particles and various chemical bonds or maybe a liquid state called ” ‘sol’.
The colloidal protoplasm which is in gel form can change into sol form by solation and the sol can change into a gel by gelation. These gel-sol conditions of the colloidal system are the prime basis for the mechanical behavior of cytoplasm.

Cohesiveness: Particles or molecules of protoplasm are adhered with each other by forces, such as Vander Waal’s bonds, that hold long chains of molecules together. This property varies with the strength of these forces.
Contractility: The contractility of protoplasm is important for the absorption and removal of water especially stomatal operations.
Surface tension: The proteins and lipids of the protoplasm have less surface tension, hence they are found at the surface forming the membrane. On the other hand, the chemical substances (NaCl) have high surface tension, so they occur in deeper parts of the cell protoplasm.

Question 2.
Describe the structure and function of mitochondria.
Answer:

Question 3.
Explain the structure of Ribosomes. Mention the types of ribosomes.
Answer:
Ribosomes were first observed by George Palade (1953) as dense particles or granules in the electron microscope. Electron microscopic observation reveals that ribosomes are composed of two rounded subunits, united together to form a complete unit. Mg2+ is required for the structural cohesion of ribosomes. Biogenesis of ribosomes is de nova formation, auto replication, and nucleolar origin. Each ribosome is made up of one small and one large subunit. Ribosomes are the sites of protein synthesis in the cell. The ribosome is not a membrane-bound organelle. 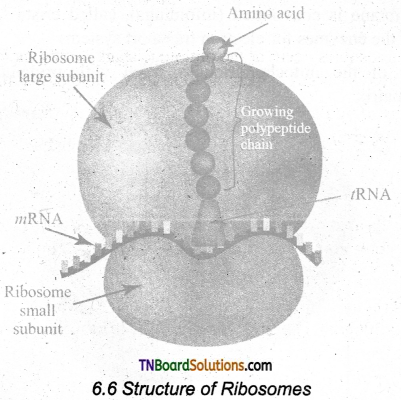 Question 4.
Give details of the special types of chromosomes in plant and animal cells.
Answer:

Question 5.
Describe the structure of eukaryotic flagella and explain the movement of the flagellum.
Answer:

Question 6.
Describe the structure and functions of Lysosomes.
Answer:
Lysosomes were discovered by Christian de Duve (1953), these are known as suicidal bags. They are spherical bodies enclosed by a single unit membrane. They are found in eukaryotic cells. Lysosomes are small vacuoles formed when small pieces of the Golgi body are pinched off from its tubules.
They contain a variety of hydrolytic enzymes, that can digest material within the cell. The membrane around the lysosome prevents these enzymes from digesting the cell itself. 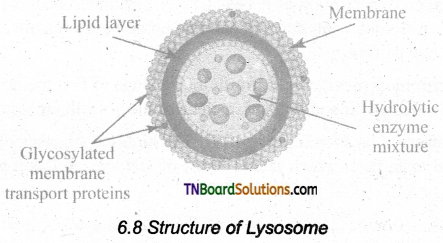 Intracellular digestion: They digest carbohydrates, proteins, and lipids present in the cytoplasm.
Autophagy: During the adverse condition, they digest their own cell organelles like mitochondria and endoplasmic reticulum
Autolysis: Lysosome causes self-destruction of cells on the insight of disease they destroy the cells.
Ageing Lysosomes have autolytic enzymes that disrupt intracellular molecules.
Phagocytosis: Large cells or contents are engulfed and digested by macrophages, thus forming a phagosome in the cytoplasm. These phago some fuse with lysosome for further digestion.
Exocytosis: Lysosomes release their enzymes outside the cell to digest other cells.

3. Phase the contrast microscope was invented by:
(a) Zemike
(b) Robert brown
(c) Sigmondy
(d) Robert Hooke
Answer:
(a) Zemike

19. Centriole consists of nine triplet peripheral fibrils made up of
(a) tubulin
(b) fibrils
(c) annuli
(d) none of the above.
Answer:
(a) tubulin