Students get through the TN Board 11th Bio Botany Important Questions Chapter 8 Biomolecules which is useful for their exam preparation.

Question 1.
What is meant by the cellular pool?
Answer:
The cell components are made of a collection of molecules called a cellular pool, which consists ’ of both inorganic and organic compounds.

Question 2.
What are Micronutrients? Give any two examples.
Answer:
Micronutrients, which are required in trace amounts, eg. Cobalt, zinc, boron, copper, molybdenum and manganese) and are essential for enzyme action.

Question 4.
Define primary metabolites.
Answer:
Primary metabolites are those that are required for the basic metabolic processes like photosynthesis, respiration, protein and lipid metabolism of living organisms.

Question 6.
Define monosaccharide.
Answer:
Monosaccharides are relatively small molecules constituting a single sugar unit. Glucose has a chemical formula of CgH^Og. It is a six-carbon molecule and hence is called hexose.

Question 7.
Define glycosidic bond.
Answer:
The bond formed between the glucose and fructose molecule by the removal of water is called a glycosidic bond. This is another example of a strong covalent bond.

Question 8.
What is chitin made up of?
Answer:
Chitin is a homo polysaccharide with amino acids added to form mucopolysaccharide. The ’ basic unit is a nitrogen-containing glucose derivative known as N-acetyl glucosamine. It forms the exoskeleton of insects and other arthropods. It is also present in the cell walls of fungi.

Question 9.
How does Herbivores digest cellulose?
Answer:
Herbivores can digest them With the help of bacteria present in the gut which produces en2yme cellulase. This is an example of mutualism.

Question 10.
What are steroids? Explain with an example.
Answer:
These are complex compounds commonly found in the cell membrane and animal hormones, eg. Cholesterol which reinforces the structure of the cell membrane in animal cells and in an unusual group of cell wall deficient bacteria —Mycoplasma.

Question 11.
Define the term amphoteric.
Answer:
(NH2), an acidic carboxylic group (COOH) and a hydrogen atom (H) and side-chain or variable R group* The amino acid is both an acid and a base is called amphoteric.

Question 13.
What is meant by an ionic bond?
Answer:
It is formed between any charged groups that are not joined together by a peptide bond. It is stronger than a hydrogen bond and can be broken by changes in pH and temperature.

Question 16.
What are competitive inhibitors? Give an example.
Answer:
Molecules that resemble the shape of the substrate and may compete to occupy the active site of the enzyme are known as competitive inhibitors, eg. the enzyme that catalyses the reaction between carbon dioxide and the CO2 acceptor molecule in photosynthesis, known as ribulose biphosphate carboxylase oxygenase (RUBISCO) is competitively inhibited by oxygen/carbon-di-oxide in the chloroplast.

Question 17.
Define the terms nucleotide and nucleoside?
Answer:
DNA and RNA are polymers of monomers called nucleotides, each of Which is composed of a nitrogen base, a pentose sugar and a phosphate. A purine or a pyrimidine and ribose or deoxyribose sugar are called nucleoside.

Question 19.
What is meant by Plectonemic coiling of DNA?
Answer:
Plectonemic coiling – the two strands of the DNA are wrapped around each other in a helix, making it impossible to simply move them apart without breaking the entire structure.

Question 20.
Give a short note on RNA.
Answer:
tRNA (transfer RNA): Translates the code from mRNA and transfers amino acids to the ribosome to build proteins. It is highly folded into an elaborate 3D structure and comprises about 15% of total RNA. It is also called soluble RNA.

Question 2.
Describe the test for reducing sugars.
Answer:
Aldoses and ketoses are reducing sugars. This means that, when heated with an alkaline solution of copper (II) sulphate (a blue solution called benedict’s solution), the aldehyde or ketone group reduces Cu2+ ions to Cu+ ions forming a brick-red precipitate of copper (I) oxide. In the process, the aldehyde or ketone group is oxidised to a carboxyl group (- COOH). This reaction is used as a test for reducing sugar and is known as Benedict’s test. The results of benedict’s test depend on the concentration of the sugar. If there is no reducing sugar it remains blue.

Question 3.
Define triglycerides. Explain with examples.
Answer:
Triglycerides are composed of a single molecule of glycerol bound to 3 fatty acids. These include fats and oils. Fatty acids are long-chain hydrocarbons with a carboxyl group at one end which binds to one of the hydroxyl groups of glycerol, thus forming an ester bond. Fatty acids are structural unit of lipids and are carboxylic acid of long-chain hydrocarbons. The hydrocarbon can vary in length from 4-24 carbons and the fat may be saturated or unsaturated. In saturated fatty acids, the hydrocarbon chain is single-bonded.
eg. Palmitic acid, Stearic acid and unsaturated fatty acids.
eg. Oleic acid, linoleie acid) the hydrocarbon chain is double bonded (one/two/three). In general solid fats are saturated and oils are unsaturated, in which most are globules.

Question 5.
What are Allosteric enzymes? Explain with a suitable example.
Answer:
They modify enzyme activity by causing a reversible change w the structure of the enzyme active site. This in turn affects the ability of the substrate to bind to the enzyme. Such compounds are called Allosteric inhibitors, eg. The enzyme hexokinase which catalysis glucose to glucose-6 phosphate in glycolysis is inhibited by glucose 6 phosphate. This is an example of a feedback allosteric inhibitor.

Question 6.
Distinguish between nucleoside and nucleotide with two examples.
Answer:

Question 7.
Explain ribosomal RNA. Add a note on its function.
Answer:
RNA (ribosomal RNA): Single-stranded, metabolically stable, make up the two subunits of ribosomes. It constitutes 80% of the total RNA. It is a polymer with varied length from 120-3000 nucleotides and gives ribosomes their shape. Genes for rRNA are highly conserved and employed for phylogenetic studies.

Question 8.
Explain the process of negative feedback inhibition with a schematic diagram.
Answer:
Negative Feedback Inhibition: When the end product of a metabolic pathway begins to accumulate, it may act as an allosteric inhibitor of the enzyme controlling the first step of the pathway. Thus the product starts to switch off its own production as it builds up. The process is- self – regulatory. As the product is used up, its production is switched on once again. This is called end-product inhibition.

Question 9.
Explain the Michaelis-Menton Constant (km) with graphical representation.
Answer:
The rate of reaction is directly proportional to the enzyme concentration. 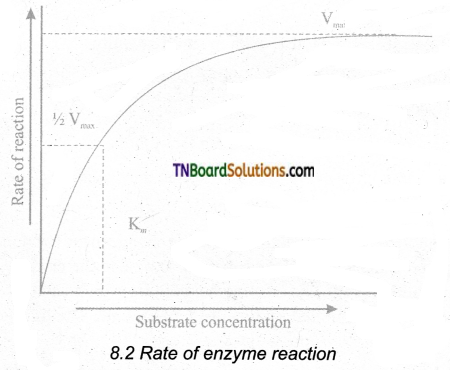 Question 10.
What is the three types of chemical bond in protein structure? Explain them with an example.
Answer:
A hydrogen bond is formed between some hydrogen atoms of oxygen and nitrogen in a polypeptide chain. The hydrogen atoms have a small positive charge and oxygen and nitrogen have a small negative charge. Opposite charges attract to form hydrogen bonds. Though these bonds are weak, a large number of them maintains the molecule in 3D shape.
Ionic Bond: It is formed between any charged groups that are not joined together by a peptide bond. It is stronger than a hydrogen bond and can be broken by changes in pH and temperature.
Disulfide Bond; Some amino acids like cysteine and methionine have sulphur. These form a disulphide bridge between sulphur atoms and amino acids.
Hydrophobic Bond: This bond helps some protein to maintain structure. When globular proteins are in solution, their hydrophobic groups point inwards away from water.

Question 1.
Describe the structure of a protein with a neat diagram.
Answer: 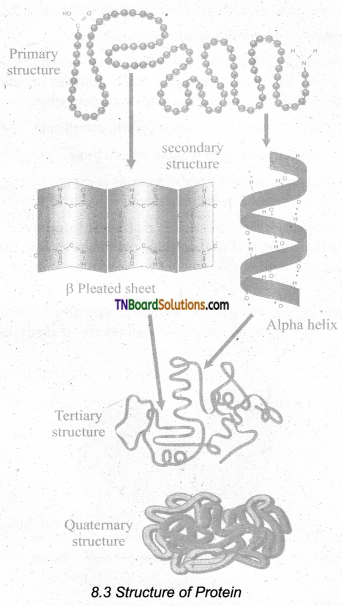 Question 2.
What are the types of cofactors? Explain each of them.
Answer:

Question 3.
Explain the structure of DNA with Watson and Crick modal.
Answer:

Question 4.
Explain any two factors affecting the rate of enzyme reaction, with the help of graphical representation.
Answer:
Enzyme Reactions: Enzymes are sensitive to environmental condition. It could be affected by temperature, pH, substrate concentration and enzyme concentration. The rate of enzyme reaction is measured by the amount of substrate changed or amount of product formed, during a period of time.
Temperature: Heating increases molecular motion. Thus the molecules of the substrate and enzyme move more quickly resulting in a greater probability of occurrence of the reaction. The temperature that promotes maximum activity is referred to as optimum temperature. 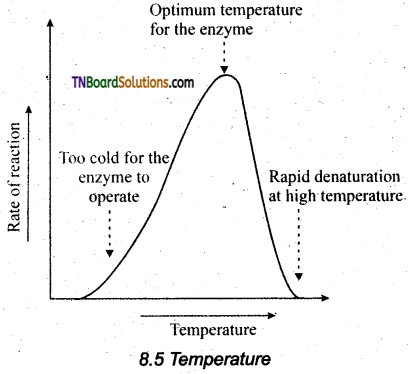 pH: The optimum pH is that at which the maximum rate of reaction occurs. Thus the pH change leads to an alteration of enzyme shape, including the active site. If extremes of pH are encountered by an enzyme, then it will be denatured. 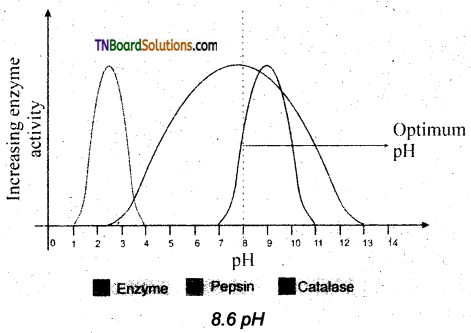 Question 5.
Describe the structure and functions of various other polysaccharides.
Answer:

1. Which is the most abundant component in living organisms.
(a) Minerals
(b) Macromolecules
(c) Water
(d) Protein
Answer:
(c) Water

27. Formation of new chemical bonds using ATP as a source of energy is the mode of action of the enzymes.
(a) Hydrolase
(b) Isomerase
(c) Lyase
(d) Ligase
Answer:
(d) Ligase