Students get through the TN Board 11th Bio Zoology Important Questions Chapter 6 Respiration which is useful for their exam preparation.

Question 2.
Define respiration.
Answer:
The term respiration refers to the exchange of oxygen and carbondioxide between environment and cells of our body where organic nutrients are broken down enzymatically to release energy.

Question 6.
Write the respiratory passage of human.
Answer:
The respiratory system includes the external nostrils, nasal cavity, the pharynx, the larynx, the trachea, the bronchi and bronchioles and the lungs which contain the alveoli.

Question 7.
What is the use of epithelial cells lining the trachea.
Answer:

Question 8.
Name the three layers of alveoli.
Answer:
The diffusion membrane of the alveolus is made up of three layers – the thin squamous epithelial cells of the. alveoli, the endothelium of the alveolar capillaries and the basement substance found in between them.

Question 9.
Name the cells and their nature that are present in the alveoli.
Answer:
The thin squamous epithelial cells of the alveoli are composed of Type I and Type II cells. Type I cells are very thin so that gases can diffuse rapidly through them. Type II cells are thicker, synthesize and secrete a substance called Surfactant.

Question 10.
Write about the location of the lungs and its structure briefly.
Answer:

Question 13.
What is meant by ‘SURFACTANT’?
Answer:
Surfactants are thin non-cellular films made of protein and phospholipids covering the alveolar membrane. The surfactant lowers the surface tension in the alveoli and prevents the lungs from collapsing. It also prevents pulmonary oedema.

Question 14.
What is ‘NRDS’?
Answer:
Premature Babies have low levels of surfactant in the alveoli may develop the new bom respiratory distress syndrome (NRDS) because the synthesis of surfactants begins only after the 25th week of gestation.

Question 16.
What are the muscles involved in the action of the lungs?
Answer:
Lungs do not contain muscle fibres but expands and contracts by the movement of the ribs and diaphragm. The diaphragm is a sheet of tissue that separates the thorax from the abdomen.
In a relaxed state, the diaphragm is dome-shaped. Ribs are moved by the intercostal muscles. External and internal intercostal muscles found between the ribs and the diaphragm helps in creating pressure gradients.

Question 18.
What is inspiration?
Answer:
The increase in pulmonary volume and decrease in the intrapulmonary pressure forces the fresh air from outside to enter the air passages into the lungs to equalize the pressure. This process is called inspiration.

Question 19.
What is expiration?
Answer:
Relaxation of the diaphragm allows the diaphragm and sternum to return to its dome shape and the internal intercostal muscles contract, pulling the ribs downward reducing the thoracic volume and pulmonary volume. This results in an increase in the intrapulmonary pressure slightly above the atmospheric pressure causing the expulsion of air from the lungs. This process is called expiration.

Question 20.
Explain about the different respiratory volumes and capacities of lungs.
Answer:
Respiratory Volumes – Tidal Volume (TV): Tidal volume is the amount of air inspired or expired with each normal breath. It is approximately 500 mL., i.e. a normal human adult can inspire or expire approximately 6000 to 8000mL of air per minute. During vigorous exercise, the tidal volume is about 4-10 times higher.
Inspiratory Reserve volume (IRV): Additional volume of air a person can inspire by forceful inspiration is called Inspiratory Reserve Volume. The normal value is 2500 to 3000 mL.
Expiratory Reserve volume (ERV): Additional volume of air a person can forcefully exhale by forceful expiration is called Expiratory Reserve Volume. The normal value is 1000 -1100 mL.
Residual Volume (RV): The volume of air remaining in the lungs after a forceful expiration. It . is approximately 1100 – 1200 mL.
Respiratory capacities – Vital capacity (VC): The maximum volume of air that can be moved out during a single breath following a maximal inspiration. A person first inspires maximally then expires maximally.
VC = ERV + TV + IRV
Inspiratory capacity (IC): The total volume of air a person can inhale after normal expiration.
It includes tidal volume and inspiratory reserve volume. IC = TV + IRV.
Expiratory capacity (EC): The total volume of air a person can exhale after normal inspiration.
It includes tidal volume and expiratory reserve volume. EC = TV + ERV.
Total Lung Capacity (TLC): The total volume of air which the lungs can accommodate after forced inspiration is called Total Lung Capacity. This includes the vital capacity and the esidual volume. It is approximately 6000mL. TLC = VC + RV.
Minute Respiratory Volume: The amount of air that moves into the respiratory passage per minute is called minute respiratory volume.
Normal TV = 500mL; Normal respiratory rate = 12 times/minute. Therefore, minute respiratory volume = 6 Litres/minute (for a normal healthy man).

Question 21.
Define ‘Dead Space’.
Answer:
The inspired air never reaches the gas exchange areas but fills the respiratory passages where the exchange of gases does not occur. This air is called dead space. Dead space is not involved in gaseous exchange. It amounts to approximately 150mL.

Question 23.
How the blood transports the oxygen to the tissues.
Answer:
Molecular oxygen is carried in blood in two ways: bound to haemoglobin within the red blood cells and dissolved in plasma. Oxygen is poorly soluble in water, so only 3% of the oxygen is transported in the dissolved form. 97% of oxygen binds with haemoglobin in a reversible manner to form oxyhaemoglobin (HbO2). The rate at which haemoglobin binds with O2 is regulated by the partial pressure of O2. Each haemoglobin carries a maximum of four molecules of oxygen. In the alveoli high pO2, low pCO2, low temperature and less H+ concentration, favours the formation of oxyhaemoglobin, whereas in the tissues low pO2, high pCO2, high H+ and high temperature favours the dissociation of oxygen from oxyhaemoglobin.

Question 24.
What is a sigmoid curve and how is it obtained.
Answer:
A sigmoid curve (S-shaped) is obtained when the percentage saturation of haemoglobin with oxygen is plotted against pO2. This curve is called the oxygen haemoglobin dissociation curve. This S-shaped curve has a steep slope for pO2 values between 10 and 50mm Hg and then flattens between 70 and 100 mm Hg. 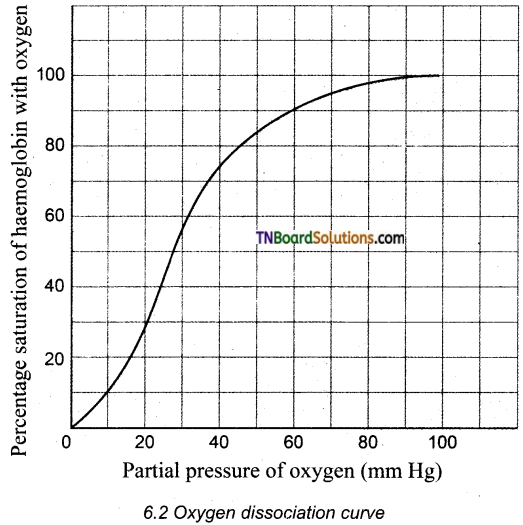 Question 26.
Describe the process of transport of CO2 carried out by haemoglobin.
Answer:

Question 27.
Write the events that make differences between inspiration and expiration.
Answer: 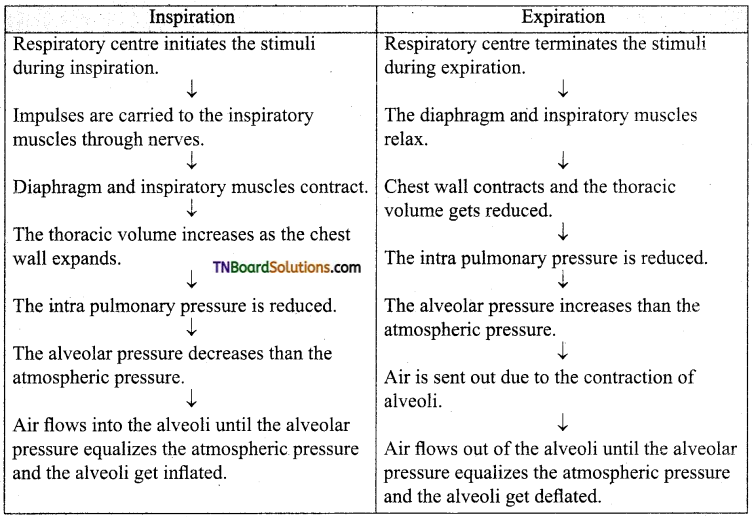 Question 28.
Write short notes on nitrogen narcosis.
Answer:
When a person descends deep into the sea, the pressure in the surrounding water increases which causes the lungs to decrease in volume. This decrease in volume increases the partial pressure of the gases within the lungs. This effect can be beneficial, because it tends to drive additional oxygen into the circulation, but this benefit also has a risk, the increased pressure can also drive nitrogen gas into the circulation. This increase in blood nitrogen content can lead to a condition called nitrogen narcosis.

Question 29.
What is ‘bends’ and how it is risky in scuba divers.
Answer:
When the diver ascends to the surface too quickly a condition called ‘bends’ or decompression sickness occurs and nitrogen comes out of solution while still in the blood-forming bubbles. Small bubbles in the blood are not harmful, but large bubbles can lodge in small capillaries, blocking blood flow or can press on nerve endings. Decompression sickness is associated with pain in joints and muscles and neurological problems including a stroke. The risk of nitrogen narcosis and bends is common in scuba divers.

Question 30.
Define the following terms and write their symptoms also.

Question 31.
How smoking causes a series of effects in our organ system.
Answer:

7. Breakdown of thin wall of the alveoli will leads to:
(a) Emphysema
(b) Asthma
(c) Pneumonia
(d) Bronchitis
Answer:
(a) Emphysema