Question 1.
What is Statistics?
Answer:

Question 2.
What are the kinds of Statistics?
Answer:
There are two major types of statistics named as

Question 3.
What do you mean by Inferential Statistics?
Answer:
The branch of statistics concerned with using sample data to make an inference about a population of data is called inferential statistics.

Question 4.
What are the kinds of data?
Answer:
In statistics, data are classified into two broad categories. They are

Question 5.
Define Correlation.
Answer:
Correlation is a statistical device that helps to analyse the covariation of two or more variables. Sir Francis Galton is responsible for the calculation of correlation coefficient.

Question 6.
Define Regression.
Answer:
Regression is the study of the relationship between the variables. The literal meaning of the word “regression” is “stepping back towards the average”.

Question 8.
What are the functions of Statistics?
Answer: 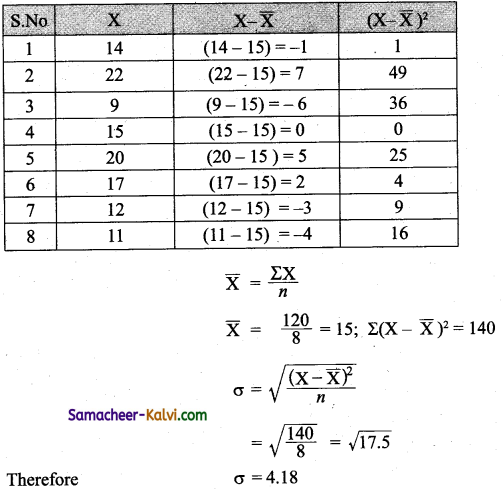 Question 10.
State and explain the different kinds of Correlation.
Answer: 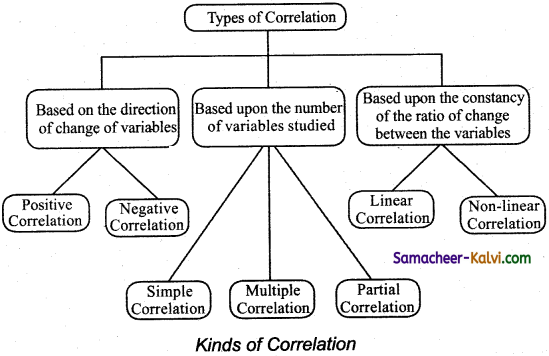 Question 11.
Mention the uses of Regression Analysis.
Answer:
The regression equation is used to estimate the value of Y corresponding to the known value of X. The line describing this tendency to regress or going back is called by Gabon as “Regression line”. 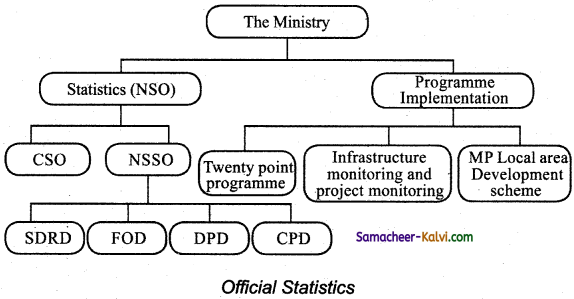 Question 15.
Elucidate the nature and scope of Statistics.
Answer:
Statistics is both as a science as well as an art in nature.
Scope: statistics are applied in every sphere of human activity.

(i) Statistics and economics:
It is useful in solving many economical problems.
Eg: Fluctuations in wages, prices, production and distribution of income.

(ii) Statistics and firms: It is used to confirm specifications of the product.

(iii) Statistics and commerce:
It is life blood of commerce.
Eg: Market survey to forecast future.

(iv Statistics and education:
It is useful to formulate policies to start new course according a changing environment.

(v) Statistics and planning:
Indispensable in planning. It is the statistical techniques are used for processing analysing and interpreting data both at Central and State Government.

(vi) Statistics and medicine:
Statistical tools are widely used in medicine.
Eg: To test the efficiency of a new drug. (T – Test)

(vii) Statistics and modern applications:
Especially in the field of computer and information technology, statistics is used. 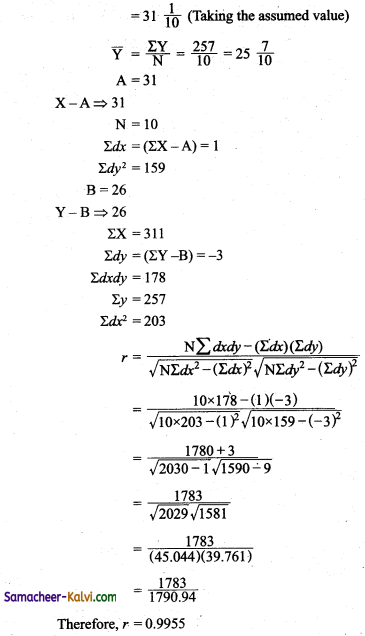 Question 17.
Find the regression equation for Y on X on Y for the following data: 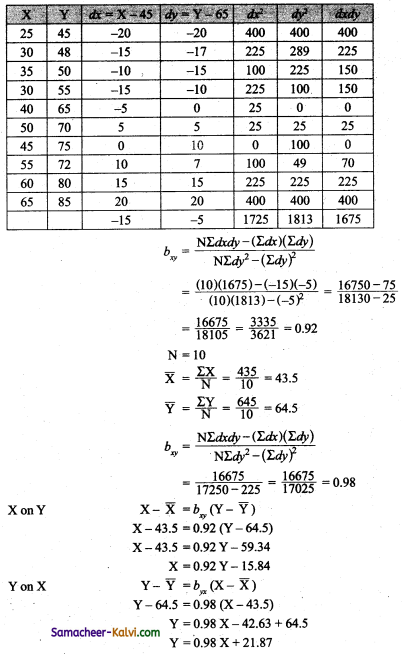 Question 2.
Who stated that statistics as a science of estimates and probabilities?
(a) Horace Secrist
(b) R.A Fisher
(c) Ya-Lun-Chou
(d) Boddington
Answer:
(d) Boddington

Question 6.
If both variables X and Y increase or decrease simultaneously, then the coefficient of correlation will be:
(a) Positive
(b) Negative
(c) Zero
(d) One
Answer:
(a) Positive

Question 7.
If the points on the scatter diagram indicate that as one variable increases the other variable tends to decrease the value of r will be:
(a) Perfect positive
(b) Perfect negative
(c) Negative
(d) Zero
Answer:
(c) Negative

Question 10.
The purpose of simple linear regression analysis is to:
(a) Predict one variable from another variable.
(b) Replace points on a scatter diagram by a straight-line.
(c) Measure the degree to which two variables are linearly associated.
(d) Obtain the expected value of the independent random variable for a given value of the dependent variable.
Answer:
(a) Predict one variable from another variable.

Question 17.
The raw materials of Econometrics are:
(a) Data
(b) Goods
(c) Statistics
(d) Mathematics
Answer:
(a) Data

→ Data: information about facts or numbers.

→ Standard deviation: The measures of central tendency serve to locate the centre of the distribution.

→ Correlation: A statistical device that helps to analyse the covariation of two or more variables.

→ Regression: (Stepping back towards the average). It is the study of the relationship between the variables.

→ Statistics: Statistics is a grammar of science.

→ Econometrics:
“Econometrics may be defined as the social science in which the tools of economic theory, mathematics and statistical inference are applied to the analysis of economic phenomena” – Arthur S. Goldberger.

→ “Econometrics, as a result of certain outlook on the role of economics, consists of application of mathematical statistics to economic data to lend empirical support to the models constructed by mathematical economics and to obtain numerical results” – Gerhard Tinbergen.