Question 3.
Define Average Propensity to Consume (APC).
Answer:
“It is the ratio of consumption expenditure to any particular level of income”.
APC = C / Y
Where C = Consumption and Y = Income

Question 5.
What do you mean by Propensity to Save?
Answer:
It is the proportion of total income or increase in income that consumers save rather than spend on consumption.

Question 8.
Define Multiplier.
Answer:
Multiplier is defined as the ratio of the change in National income to change in income
K = ∆Y / ∆I
Where K = multiplexer
∆I = Increase in investment
∆Y = Resultant increase in income

Question 13.
Mention the differences between accelerator and multiplier effect.
Answer:

Question 15.
Specify the limitations of the multiplier.
Answer:

Propositions to the law:

Three proportions of the law: 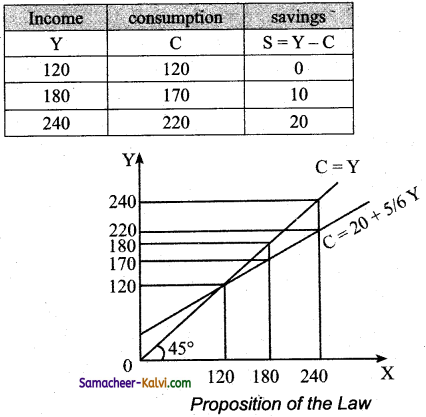 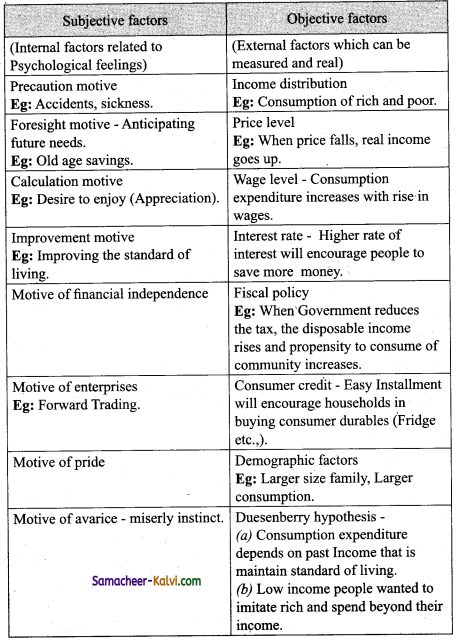 Question 18.
Illustrate the working of Multiplier.
Answer:
Working of multiplier – Numerical example:
(i) Investment expenditure undertaken by government is ₹ 100cr (on public work). It is from wages prices of material etc.,
(ii) So income of labourers and suppliers of materials increases by ₹ 100 cr.
(iii) If the marginal propensity to consume is 0.8 that is 80%.
(iv) (A sum of ₹ 80cr is spent on consumption and a sum of ₹ 20cr is saved).

Question 19.
Explain the operation of the Accelerator.
Answer:
(i) To produce 1000 consumer goods 100 machines are required and the life of machine is 10 years, (that is for every 10 years, the machine has to be replaced to maintain to produce 1000 consumer goods). This is called a Replacement Demand.
(ii) If the demand for consumer increases by 10% [ 1000 to 1100] is that case 10 more machines
are needed and the total demand for machines becomes [10 + 10 = 20 ] that is 10 for replacement and 10 for meeting the increased demand.

Note: [The important aspect is 10% increase in demand for consumer goods causes a 100% increase for machines from 10 to 20 No. of machines].

The result derived is:
Even a small change is demand for consumer goods will lead to a big change in investment. 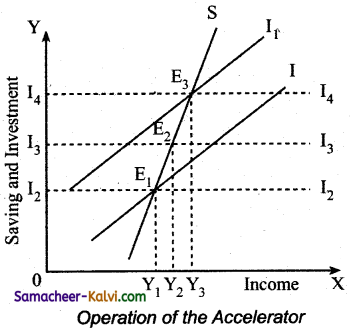 Question 20.
What are the differences between MEC and MEI?
Answer:

→ Extraneous: Calculation of the value of a function outside the range of known values.

→ Windfall gains or losses: Unexpected changes in the stock market.

→ The minimum value of multiplier: It is one (1) and maximum value is infinity.

→ Break eveb point: The point at which the volume of sales yields revenue equal to the entire fixed and variable cost. At this point profit is zero.

→ APS – Average Propensity to Save

→ MPS – Marginal Propensity to Save