Question 7.
The authority to alter the boundaries of state in India rest with?
(a) The President
(b) The Prime Minister
(c) State Government
(d) Parliament
Answer:
(d) Parliament

Question 4.
Write a short note on Speaker of the Lok Sabha.
Answer:

Question 5.
What is Money Bill?
Answer:
Money Bill refers to a bill (draft law) introduced in the Lok Sabha which generally covers the issue of receipt and spending of money, such as tax laws, prevention of black money etc.

Question 6.
List out any two special powers of the Attorney General of India?
Answer:

(ii) He appoints Governors of States, the Chief Justice and other Judges of the Supreme Court and High Courts, the Attorney General, the Chief Election Commissioner, Ambassadors and High Commissioners to other countries.

(iii) He inaugurates tire session of the Parliament by addressing it after the general elections and also at the beginning of the first session each year.

(iv) Money Bill can be introduced in the Parliaments only with his prior recommendation. Annual Budget of the Central Government is presented before the Lok Sabha by the Union Finance Minister only with the permission of the President.

(v) The President of India has the power to grant pardons, reprieves, respites or remission of punishment, or to commute the sentence of any person convicted of an offence.

(vi) He is the supreme commander of the defence force of the country. He has been empowered to proclaim Emergency in the country.

Question 2.
Explain the Jurisdiction and powers of the Supreme Court of India.
Answer:
Supreme Court is the Apex court in the Country.

It is the guardian of our Constitution. The following are the functions of the Supreme Court.

The power of the Judiciary to declare ‘a law as un-constitutional’ is known as Judicial Review.

Individual Review power with regard to

Question 4.
Critically examine the Powers and Functions of the Parliament.
Answer:

Functions of the Parliament:

A bill has to pass three stages in the Parliament before it becomes an Act.

Parliament is also vested with powers to impeach the President and to remove judges of the Supreme Court and High Courts. Chief Election Commissioner and Comptroller and Auditor – General of India in accordance with the procedure laid down in the Constitution.

Two-third majority from both the houses of the Parliament is needed in support for the impeachment.

The Parliament exercises control over the executive through asking questions and supplementary, questions, moving motions of adjournment, discussing and passing resolutions, discussing and pushing motion or vote of no¬confidence.

The first hour when the Parliament is in session is allotted for question hour.

The members can put forth questions to the concerned Ministry and pertain to get answers.

The Parliament has the power to change the boundaries of the states.

By Fifth Amendment under Article 3 of our Constitution the Parliament is empowered to the formation of new states, alteration of areas and boundaries or change the name of the existing state.

A government bill should get passed in the Parliament with majority vote in this regard.

Question 5.
List out the functions of the Lok Sabha and the Rajya Sabha.
Answer:
Functions of Lok Sabha

Functions of the Rajya Sabha

Prime Minister Narendra Modi intends to organise a mock Parliament in Delhi with representation from every district.

It is of two types:

Question 2.
Bring out the differences and similarities between the US and Indian President’s.
Answer:

Question 2.
Who is the supreme commander of the defence forces of India?
(a) Prime Minister
(b) Chief Justice of Supreme Court
(c) President
(d) Vice – President
Answer:
(c) President

Question 3.
The …………….. is the Constitutional head of the Union Executive.
(a) President
(b) Prime Minister
(c) Chief Justice
(d) Council of Minister
Answer:
(a) President

Question 11.
The …………….. is instrumental in moving amendments to the Constitution.
(a) Cabinet
(b) Council of States
(c) President
(d) Attorney General
Answer:
(a) Cabinet

Question 14.
In …………….. jurisdiction the Supreme Court hears appeals against the decisions of High Court.
(a) Original
(b) Appellate
(c) Advisory
(d) Judicial Review
Answer:
(b) Appellate

Question 15.
The law declared by the …………….. is binding on all courts within the territory of India.
(a) Supreme Court
(b) High Court
(c) District Court
(d) Revenue Court
Answer:
(a) Supreme Court

Question 1.
Match the Column I with Column If. 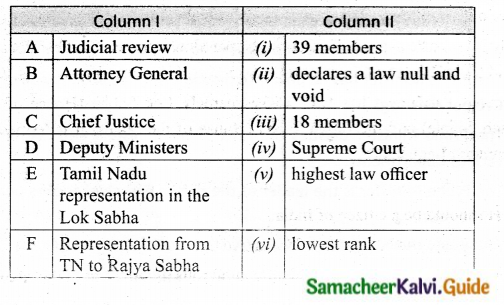 Question 1.
Describe briefly the diplomatic powers of the President.
Answer:

Question 2.
“Prime Minister represents our nation at all International Conferences”- Explain.
Answer:
The Prime Minister is the leader of the Nation and chief spokes person of the country.

As the leader of the nation, the Prime Minister represents our nation at all International Conferences like the Common Wealth Summit of Non aligned Nations and SAARC.

Question 4.
What are the qualification to become the member of Lok Sabha?
Answer:

Question 6.
Write a brief note on the appointment of judges of the Supreme Court?
Answer:

Question 8.
What do you know about motion of no confidence?
Answer:

Question 9.
What is the qualification of President of Indi?
Answer:
The Constitution lays down the following qualifications for a Presidential candidate:

The Constitution also provides appointment of judges to the supreme court on ad – hoc (temporary) basis.

Removal of the Vice-President:

Question 4.
What is the role of the Vice President in the absence of the President?
Answer: