V. Answer the following in brief

Question 1.
Explain the cropping seasons of Tamil Nadu.
Answer:
The farmers select different crops for different seasons of cultivation based on the temperature and availability of moisture in the soil.

Question 2.
Why is Coimbatore called the Manchester of Tamil Nadu?
Answer:
Maximum units are concentrated in and around Coimbatore region. For this region, it is known as the “Manchester of South India”. It is known as such because of presence of more than 25,000 small, medium, large scale industries and textile mills.

Question 4.
What is MRTS?
Answer:
MRTS means mass Rapid Transport System and currently developing a Metro System, with its first underground stretch in operation since May 2017.

Question 6.
Have you heard about any stampede in your district? Write about that incident briefly.
Answer:
Do it yourself.

VII. Give reasons for the following

Question 3.
Karur is Called the Textile Capital of Tamil Nadu.
Answer:
Karur is a well known industrial centre the city is famous for cottage and handloom textiles. It exports all kinds of textile items all over the world.

Question 4.
Mostly stampede occurs in Temples.
Answer:
During festival seasons in temples people from all over gather in thousands or lakhs. Sometimes the uncontrolled crowds when they move towards each other (to and fro) may push each other. The packed situation and lack of space lead to panic and asphysciation that make breathing very difficult and stampede occurs.

VIII. Answer the following in a paragraph

Question 1.
Write about the plantation farming of Tamil Nadu.
Answer:

Question 2.
Give an account on water resources of Tamil Nadu.
Answer:
Tamil Nadu has only 2.5% of India’s water resources. More than 95% of the surface water and 80% of the ground water have already been put into use.

Major uses of water: It include human / animal consumption, irrigation and industrial use.

Rainfall: The state is mainly dependent on monsoon rains. The average annual rainfall is around 930 mm. 47% during north east monsoon, 35% during the south west Monsoon 14% in summer and 4% in winter. 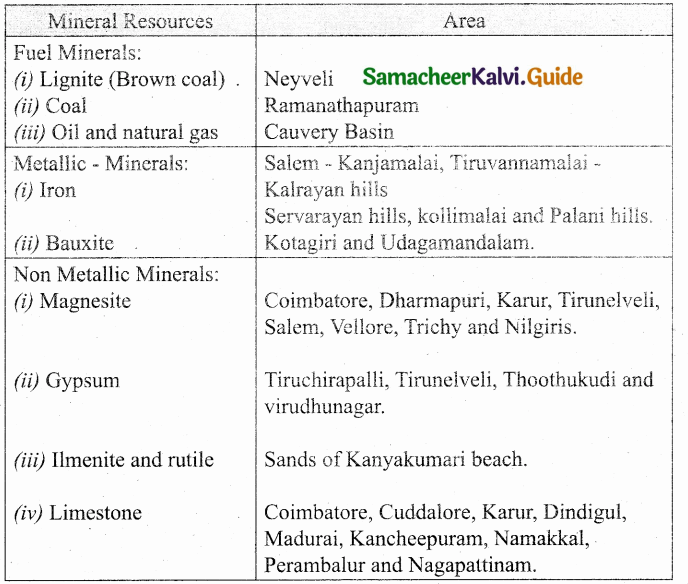 In some parts of the state feldspar, quartz, copper and lead also found in less quantity.

Question 4.
State the densely populated regions of Tamil Nadu and account for its high density.
Answer: 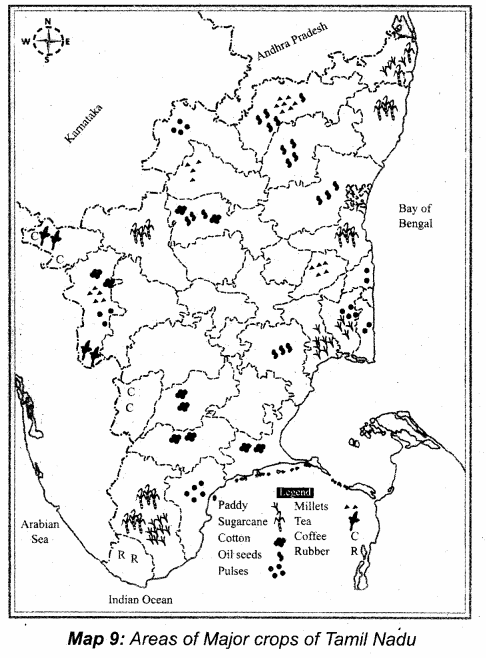 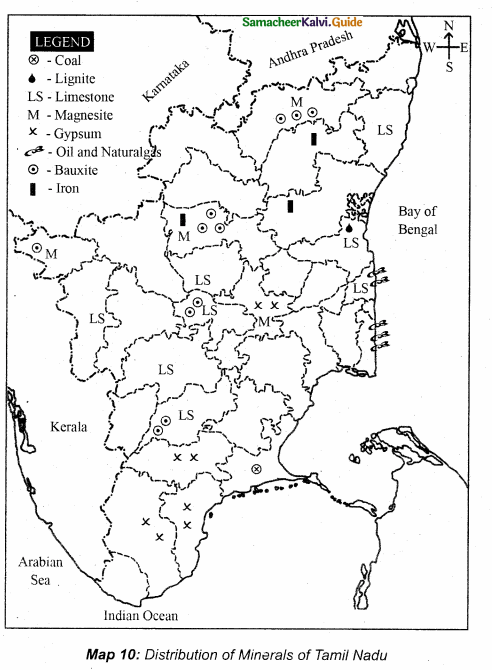 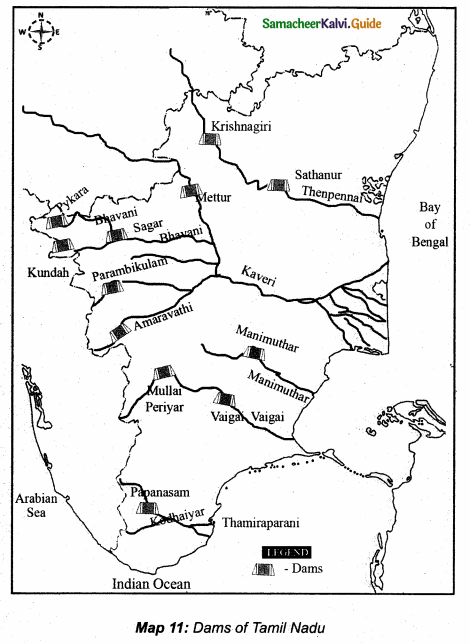 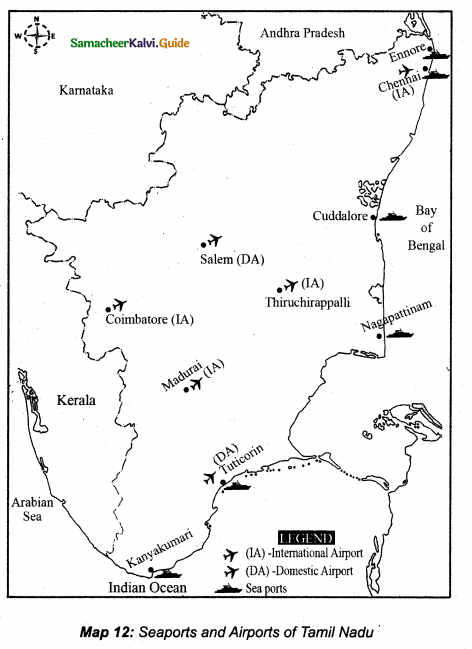 Question 1.
A triangular-shaped alluvial tract formed at the mouth of the river:
(a) Doab
(b) Bay
(c) Delta
(d) Harbour
Answer:
(c) Delta

Question 2.
Agriculture is the ………….. and traditional occupation.
(a) Primary
(b) Secondary
(c) Service
Answer:
(a) Primary

Question 8.
The Headquarters of the Southern Railways is in …………….
(a) Chennai
(b) Cochin
(c) Mumbai
Answer:
(a) Chennai

Question 17.
……………….. is the official enumeration of population-based on various aspects.
(a) Density
(b) Census
(c) Religion
(d) Stampede
Answer:
(b) Census

Question 20.
The rapid increase of ……………….. may retard economic growth.
(a) population
(b) literacy
(c) agriculture
(d) industries
Answer:
(a) population

Question 1.
Match the Column I with Column II

Question 2.
Match the Column I with Column II

V. Answer the following in brief

Question 1.
What is Agriculture?
Answer:
It is the process of producing food, feed fiber and many other desired products by the cultivation of certain plants and the raising of domesticated plants.

Question 2.
What do you mean by “Human Geography”.
Answer:
Human Geography refers to the study of ways of development of human societies and their operation in relation to their physical environment.

Question 3.
What is Port?
Answer:
The commercial port of a harbour with the facility of loading and unloading of goods and space for the storage of cargo.

Question 5.
Define Birth rate:
Answer:
The number of live births per annum per thousand people in a region is called birth rate.

Question 6.
What are the conditions required for the cultivation of pulses?
Answer:

Question 7.
What are the important pulses varieties grown in Tamil Nadu? and their uses.
Answer:

Question 8.
What do you understand by the term ‘mixed farming’?
Answer:
It is a type of farming which involves both growing of crops and the raising of live-stock simultaneously in a land holding.

Question 9.
What are fibre crops?
Answer:

Question 12.
What do you mean by Irrigation?
Answer:
Irrigation refers to the artificial supply of watering the fields. For a monsoon fed region like Tamil Nadu where rainfall is irregular and seasonal irrigation – become essential.

VII. Give reasons for the following

Question 2.
Human beings are the most significant reasons on the earth surface.
Answer:

Thus the human beings are the most significant resources on the earth surface.

Question 5.
It is important to save water for us and the future generation.
Answer:

VIII. Answer the following in paragraph

Tamil Nadu Newsprint and Papers Limited (TNPL) is a government of Tamil Nadu enterprise producing newsprint and printing and writing paper at its mill located at Kagithapuram in Karur district. It was started in 1979 with an installed capacity of 2.45 lakh MT of production per annum. TNPL is one of the most accomplished mills in the world/producing different varieties paper of acceptable quality primarily from bagasse and pulpwood.

Question 2.
Define the man-made disaster and enumerate the reasons for the industrial disaster.
Answer:

Major Reasons: Disasters caused by industrial companies either by

(iv) Electricity is not just a life line; it can also take away life when handled improperly. Other causes for industrial disasters are:

The regular maintenance of machines and wires may reduce the frequency of accidents. More over the administration should be employees friendly and ready to extend their help in case of any untoward incidents.

TANCEM: Tamil Nadu Cements Corporation Limited is one among the major cement producers in Tamil Nadu operating two cement units at (i) Ariyalur and (ii) Alangulam

The other units of TANCEM are (i) Asbestos cement sheet plant at Alangulam and (ii) Stone ware pipe unit at Virudhachalam.

Question 6.
What does the term ‘Gl Tag’ refer to? List out some important Gl tags of Tamil Nadu.
Answer:
“Gl (Geographical Indication) is a name or sign used on products which corresponds to a specific geographical location. It provides rights and protection of holders.

Some important Gl tags of Tamil Nadu are:

Question 7.
What is special about SEZs and write about the SEZs zones in Tamil Nadu.
Answer: 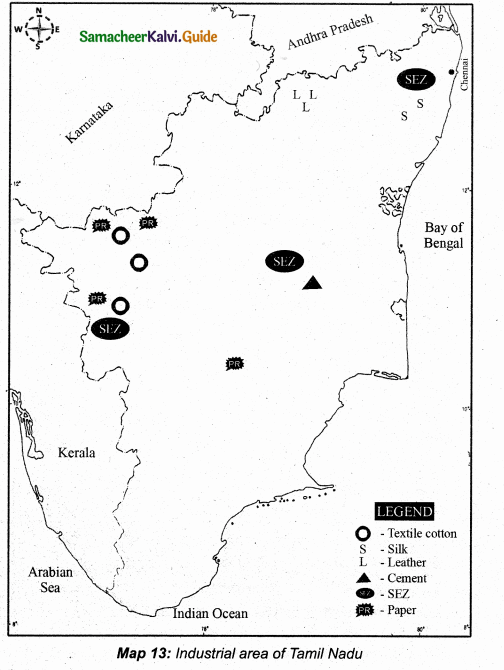 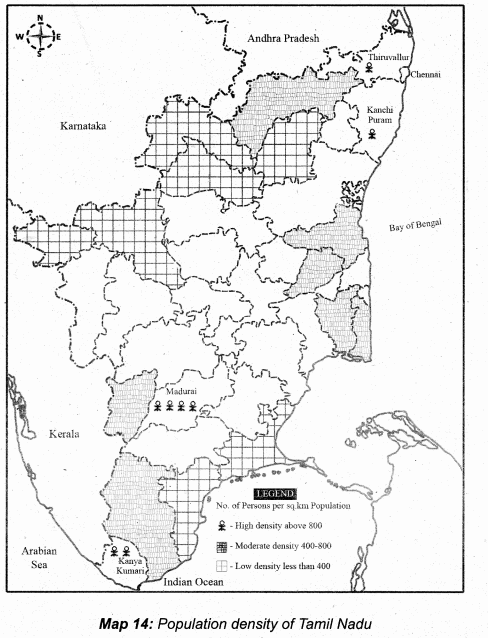 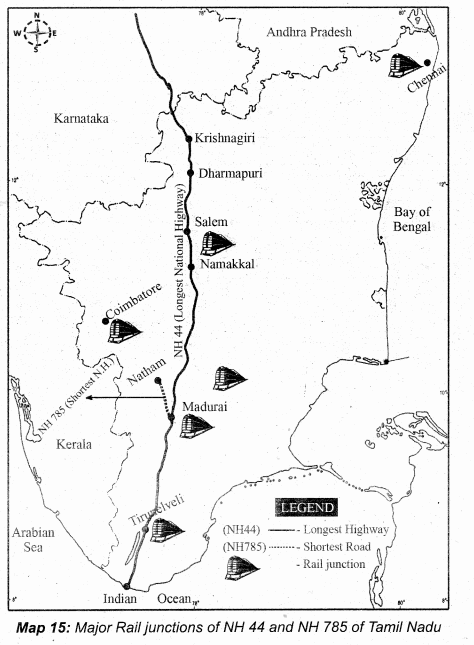 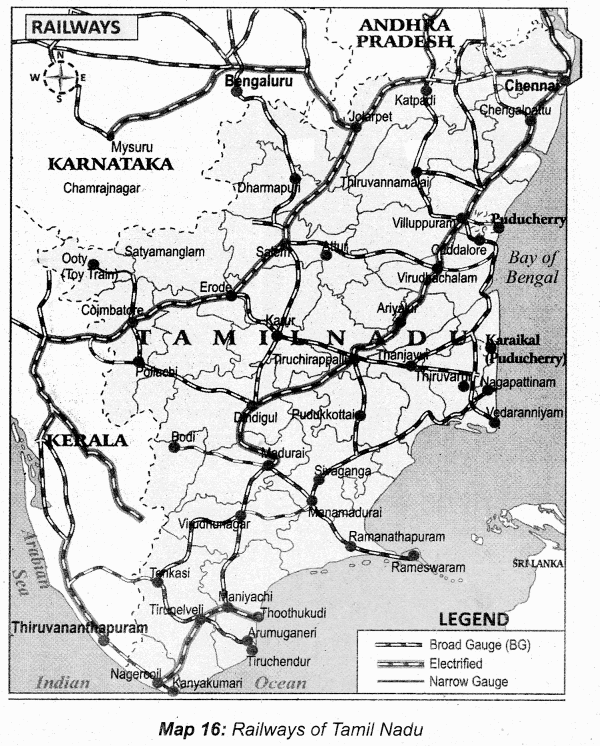 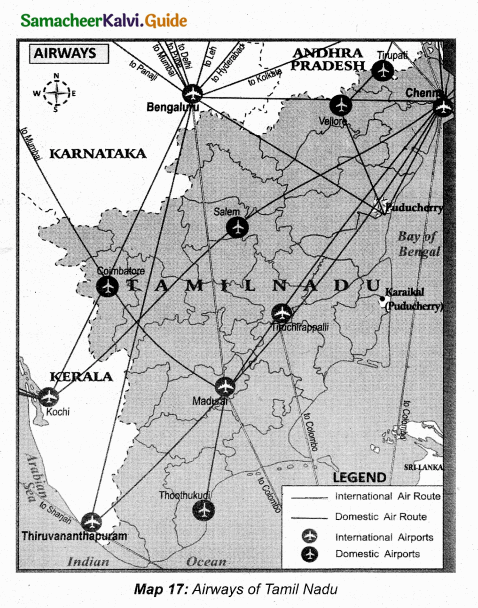