Pin the tail on the donkey. 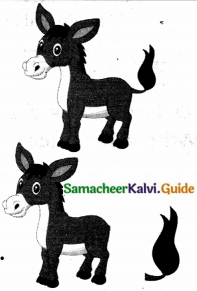 A. Answer the following:

1. What made the sage upset?
Answer:
The sage was upset, as his pigtail hung behind him.

2. Why did the sage spin all day?
Answer:
The sage span all day to change the Pigtail’s place.

3. What solution did he arrive at for the mystery that he found?
Answer:
He thought that if turned him round, he can change the position of his pigtail.

B. Read the poem lines and answer the questions given below: (Text Book Page No. 107)

b) What does the word ’it’ refer to here?
Answer:
‘It’ refers to the Pigtail here.

2. And though his efforts never slack And though he twist, and twirl, and tack,
Alas! Still faithful to his back
The pigtail hangs behind him.
a) Pick out the rhyming words from the above lines and give the rhyme scheme for the same?
Answer:
Rhyming words: sack – tack – back
Rhyme scheme: a a a b

3. ‘He mused upon this curious case’
what is the figure of speech used in this line?
Answer:
Personification.

Can this poem be called an ironic poem? Justify your answer.

Yes, this poem is an ironic poem because the word ‘sage’ is used in an ironic sense to refer to a person who is dull-witted. It insists on how learned men lack practical sense.

This poem can be called an ironic poem. The character in this poem is a wise man. He has a handsome Pigtail. Naturally, it will hang behind the person. In spite of being wise, he decides to change his position. He knows it well. But he tries to change its position. He wants it to hang on his face.

How funny the idea is! The ways he follows to changes its place are full of irony. He turns him round and round, out and in, he spins all day. It all ends in vain. But he does not want to give up his trying. The poet ends the poem by saying. The Pigtail remains faithful to his back. So the poem ends with irony.

C. Fill in the table with the appropriate poem lines. A few lines may be used more than one time. (Text Book Page No. 108) 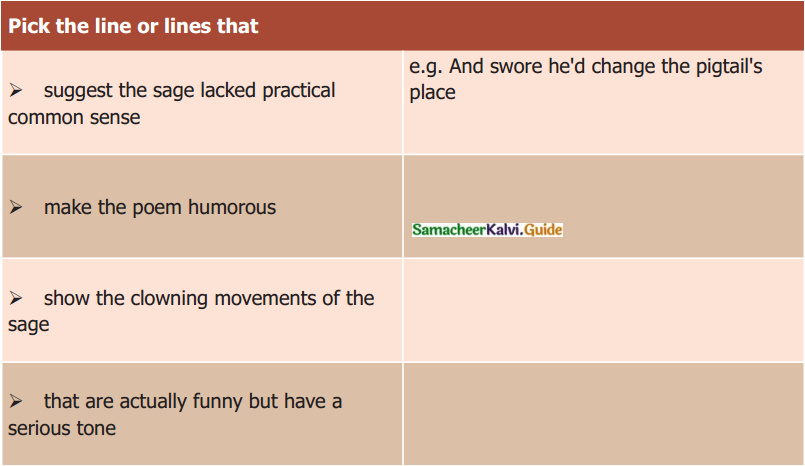 D. The summary of the poem is given. But there are some words missing. Fill in the blanks with the help of the box given below. (Text Book Page No. 108)

Once upon a time, there lived a sage He had a handsome pigtail He was worried and pondered over his pigtail’s place. He wanted to change its place. He wanted it hanging on his face. He didn’t like it hanging there behind him. So he turned right and left and roundabout, up and down and in and out but it still hung behind him. However he tried, his efforts were in vain. But he didn’t slack in his efforts. Nevertheless, his pigtail hung faithfully behind him.

b) What did he swear?
Answer:
He swore that he would change the pigtail’s place.

2. And swore he’d change the pigtail’s place,
And have it hanging at his face
Not dangling there behind him.
Pick out the alliterated words.
Alliterated words:
Answer:
Pigtail’s – place
have – hanging – his

b) Who is faithful?
Answer:
The pigtail remains faithful to his back.

A Tragic Story Summary in English

A Tragic Story Summary in Tamil

A Tragic Story About the Author in English

William Makepeace Thackeray (18 July 1811 – 24 December 1863) was an English novelist of the 19th century. He was famous for his satirical works, particularly. Vanity Fair, a panoramic portrait of English society.

A Tragic Story About the Author in Tamil