Question 1.
Define economic development.
Answer:
Michael P. Todaro, “Development must, therefore, be conceived as a multidimensional process involving major changes in social structures, popular attitudes and national institutions as well as the acceleration of growth, the reduction of inequality and the eradication of absolute poverty.

Question 4.
What is GNP?
Answer:
Gross National Product is the total market value of all final goods and services produced within a nation in a particular year, plus income earned by its citizens, (including income of those located abroad) minus income of non residents located in that country.

“Economic Planning in the widest sense is the deliberate direction by, persons in-charge of large resources of economic activity towards chosen ends – Dalton.

Question 6.
What are the social indicators of economic development?
Answer:
Social indicators: It is referred to as basic and collective needs of the people. The direct provision of basic needs such as health, education etc check social backwardness.

Question 7.
Write a short note on NITI Aayog.
Answer:
National Institution for transforming India was formed in 1st January 2015 by union Cabinet Resolution. It is the policy of Government of India. It has replaced the Planning Commission from 13 August 2014.

Question 8.
Elucidate major causes of vicious circle of poverty with diagram.
Answer:
There are circular relationship known as vicious circle of poverty on Low production, Low investment, Low conception.
Example, A poor man may not have enough to eat, being underfed his health is lost and so his working capacity is low. It operates both on demand and supply side – the cause and the effect is the same.(vicious) 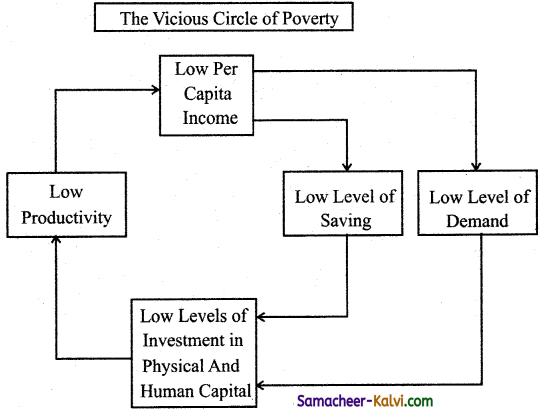 Question 9.
What are the non-economic factors determining development?
Answer:

Question 10.
How would you break the vicious circle of poverty?
Answer:
Vicious circle is associated with low rate of saving and investment on supply side. In underdeveloped country, the rate of investment and capital formation can be stepped up without reduction in consumption. For this the marginal rate of savings is to be greater than aggregate of saving.

Question 11.
Trace the evolution of economic planning in India.
Answer:

Question 12.
Describe the case for planning.
Answer:
The Economic planning is justified on the following grounds.

Question 13.
Distinguish between functional and structural planning.
Answer:
Functional planning:
It refers to that planning which seeks to remove economic difficulties by directing all the planning activities within the existing economic and social structure.

Structural planning:
It refers to a good deal of changes in the socio economic frame work of the country. This type of planning is adopted mostly in under developed countries.

Question 14.
What are the functions of NITI Aayog?
Answer:

Question 15.
Discuss the economic determinants of economic development.
Answer:
Economic Factors:
(i) Natural Resources:
The existence of natural resources in abundance is essential for development. But India with larger resources is poor.

(iv) Structural change:
Change in occupational structure of the economy. If the economy is agricultural predominant, then it remains backward.

(vi) Marketable surplus:
Total amount of output cultivated above consumption of their own. This can be sold in the market for earning income.

(vii) Foreign trade:
When the country has huge FOREX then it is developed. 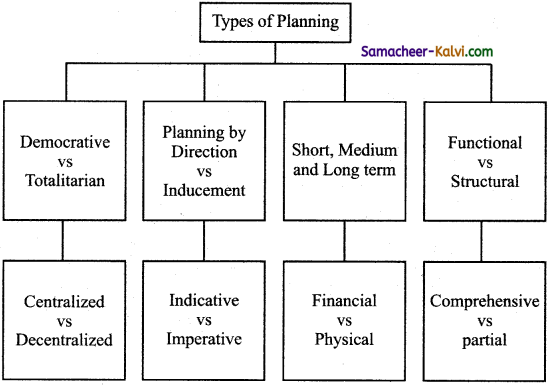 There are different types of planning which differ in ideology and the procedure.
(i) Democratic Vs totalitarian:
Democratic – Planning within democracy
Totalitarian – There is control of Central Government

(iv) Indicative Vs Imperative:
Indicative – The outline of the plan is prepared by the Government and executed by private in mixed economy.
Imperative – The government policies and procedures are rigid.
Eg: China, Russia. 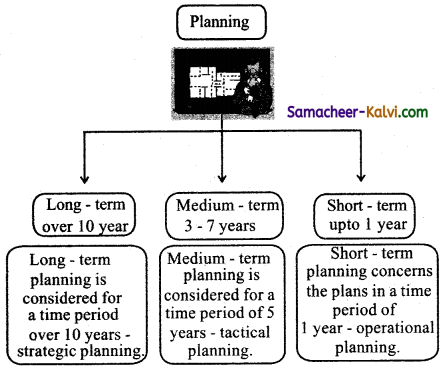 (ii) Elimination of Initiating:
Under centralized planning, there will be no incentive for initiatives and innovations. The absence of private ownership discourages the entrepreneur from taking bold decisions. The red-tapism is also prevalent in the economy.

(iii) High Cost Management:
Cost management of economic affairs outweighs the benefits of planning. As Lewis says, “The better we try to plan, the more planners we need”.

(iv) Difficulty in advance calculations:
The producers and consumers adjust their supply and demand based on price changes. There is no such mechanism in a planned economy. The arguments against planning are concerned with centralized and totalitarian planning.

Question 7.
Which of the following plan has focused on the agriculture and rural economy?
(a) People’s Plan
(b) Bombay Plan
(c) Gandhian Plan
(d) Vishveshwarya Plan
Answer:
(c) Gandhian Plan

Question 10.
Which of the following country adopts indicative planning?
(a) France
(b) Germany
(c) Italy
(d) Russia
Answer:
(b) Germany

Question 13.
The basic philosophy behind long-term planning is to bring _________ changes in the economy.
(a) Financial
(b) Agricultural
(c) Industrial
(d) Structural
Answer:
(c) Industrial

→ Crony capitalism: People do not participate in the process of development.

→ Marketable Surplus: Refers to the total amount of farm output cultivated by farmers over and above their family consumption needs.

→ Economic development:
“Development must, therefore, be conceived as a multidimensional process involving major changes in social structures, popular attitudes and national institutions as well as the acceleration of growth, the reduction of inequality and the eradication ofabsolute poverty. – Michael P. Todaro.

→ Non – Economic factors:
“Economic Development has much to do with human endowments, social attitudes, political conditions and historical accidents. Capital is a necessary but not a sufficient condition of progress ”. – Ragnar Nurkse.

→ Vicious circle of poverty:
Nurkse explains the idea in these words: “It implies a circular constellation of forces tending to act and react upon one another in such a way as to keep a poor country in a state of poverty.

→ Planning:
Economic Planning is “collective control or suppression of private activities of production and exchange -Robbins

“Economic Planning in the widest sense is the deliberate direction by persons in-charge of large resources of economic activity towards chosen ends”. -Dalton