Question 1.
Which of the following defines what an object can do?
(a) OS
(b) Computer
(c) Interface
(d) Interpreter
Answer:
(c) Interface

Question 3.
Which of the following security technique that regulates who can use resources in a computing environment?
(a) Password
(b) Authentication
(c) Access control
(d) Certification
Answer:
(c) Access control

Question 7.
Which command is used to remove the entire string variable?
(a) Remove
(b) Del
(c) Delete
(d) Strike
Answer:
(b) Del

Question 9.
In which database systems, transaction management is efficient?
(a) DBMS
(b) RDBMS
(c) ERDMS
(d) DMBS
Answer:
(b) RDBMS

Question 15.
Which of the following module is provided by Python to do several operations on the CSV files?
(a) Py
(b) Xls
(c) Csv
(d) Os
Answer:
(d) Os

Question 16.
Write note on Grant and Revoke command?
Answer:
Grant: Grants permission to one or more users to perform specific tasks.
Revoke: Withdraws the access permission given by the GRANT statement.

Question 18.
Define subroutine?
Answer:
Subroutines are the basic building blocks of computer programs. Subroutines are small sections of code that are used to perform a particular task that can be used repeatedly. In Programming languages these subroutines are called as Functions.

Question 19.
Write note on modules?
Answer:
A module is a part of a program. Programs are composed of one or more independently developed modules. A single module can contain one or several statements closely related each other. Modules work perfectly on individual level and can be integrated with other modules.

Question 23.
Write note on list comprehension?
Answer:
List comprehension is a simplest way of creating sequence of elements that satisfy a certain condition.
Syntax:
List = [expression for variable in range]

Question 24.
What is the purpose of Destructor?
Answer:
Destructor is also a special method gets executed automatically when an object exit from the scope. It is just opposite to constructor. In Python, del ( ) method is used as destructor.

(b) A Posteriori testing:
This is called performance measurement. In this analysis, actual statistics like running time and required for the algorithm executions are collected.

Question 26.
Write note on Arithmetic operators?
Answer:
An arithmetic operator is a mathematical operator that takes two operands and performs a calculation on them. They are used for simple arithmetic. Most computer languages contain a set of such operators that can be used within equations to perform different types of sequential calculations.

Question 27.
Write note on comments?
Answer:
In Python, comments begin with hash symbol (#). The lines that begins with # are considered as comments and ignored by the Python interpreter. Comments may be single line or no multi-lines. The multiline comments should be enclosed within a set of:-
# as given below.
# It is Single line Comment
# It is multiline comment
which contains more than one line #

Question 28.
Give the flowchart for ‘for loop’ execution?
Answer: 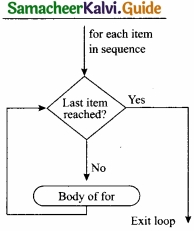 Question 34(a).
Describe in detail the procedure script mode programming?
Answer:
Basically, a script is a text file containing the Python statements. Python Scripts are reusable code. Once the script is created, it can be executed again and again without retyping. The Scripts are editable. 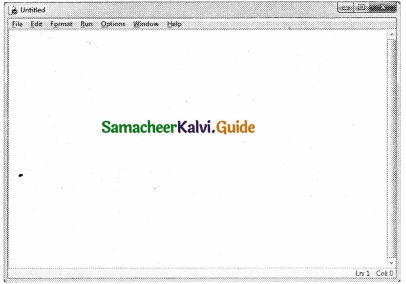 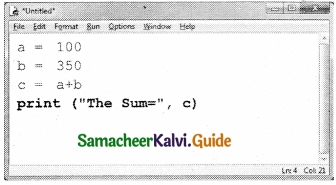 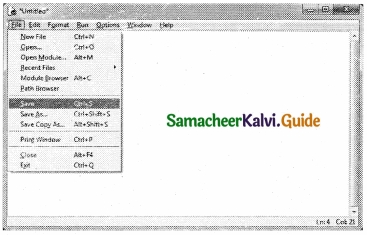 (II) Now, Save as dialog box appears on the screen 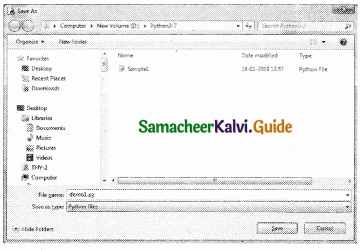 (III) In the Save As dialog box, select the location where you want to save your Python code, and type the file name in File Name box. Python files are by default saved with extension .py. Thus, while creating Python scripts using Python Script editor, no need to specify the file extension.

(IV) Finally, click Save button to save your Python script.

(II) If your code has any error, it will be shown in red color in the IDLE window, and Python describes the type of error occurred. To correct the errors, go back to Script editor, make corrections, save the file using Ctrl + S or File → Save and execute it again.

(III) For all error free code, the output will appear in the IDLE window of python 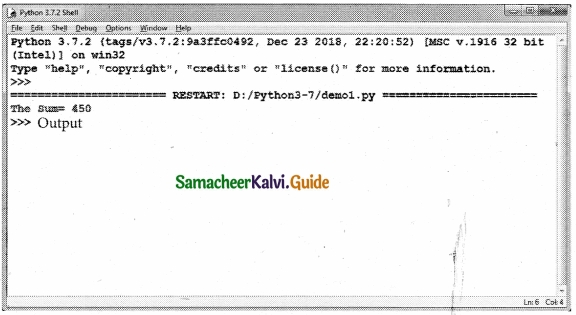 (b) Explain data types in python?
Answer:
Python Data types:
All data values in Python are objects and each object or value has type. Python has Built-in or Fundamental data types such as Number, String, Boolean, tuples, lists and dictionaries.

Complex number is made up of two floating point values, one each for the real and imaginary parts.

Boolean Data type:
A Boolean data can have any of the two values: True or False.

(II) Application Programmers or Software Developers:
This user group is involved in developing and designing the parts of DBMS.

(III) End User:
End users are the one who store, retrieve, update and delete data.

(IV) Database designers:
Are responsible for identifying the data to be stored in the database for choosing appropriate structures to represent and store the data.

Question 37 (a).
Explain various components of DBMS?
Answer:
The Database Management System can be divided into five major components as follows:

1. Hardware:
The computer, hard disk, I/O channels for data, and any other physical component involved in storage of data

2. Software:
This main component is a program that controls everything. The DBMS software is capable of understanding the Database Access Languages and interprets into database commands for execution.

3. Data:
It is that resource for which DBMS is designed. DBMS creation is to store and utilize data.

4. Procedures/Methods:
They are general instructions to use a database management system such as installation of DBMS, manage databases to take backups, report generation, etc.

5. DataBase Access Languages:
They are the languages used to write commands to access, insert, update and delete data stored in any database. 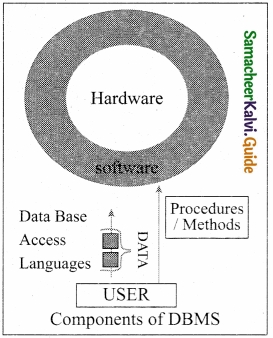 (b) Differentiate IN and NOTIN in SQL using sample commands? IN Keyword?
Answer:
The IN keyword is used to specify a list of values which must be matched with the record values. In other words it is used to compare a column with more than one value. It is similar to an OR condition.

For example :
SELECT Admno, Name, Place FROM Student WHERE Place IN (“Chennai”, “Delhi”);

NOT IN:
The NOT IN keyword displays only those records that do not match in the list.

For example:
SELECT Admno, Name, Place FROM Student WHERE Place NOT IN (“Chennai”, “Delhi”); will display students only from places other than “Chennai” and “Delhi”.

This method parses command-line options and parameter list. Following is the syntax for this method
=getopt.getopt( argv, options, {long_options])
Here is the detail of the parameters –

getopt( ) method returns value consisting of two elements. Each of these values are stored separately in two different list (arrays) opts and args .Opts contains list of splitted strings like mode, path and args contains any string if at all not splitted because of wrong path or mode, args will be an empty array if there is no error in splitting strings by getopt( ). For example The Python code which is going to execute the C++ file p4 in command line will have the getopt Q method like the following one. opts, args = getopt.getopt (argv, “i:”,[‘ifile=’])

Since there is no main( ) function in Python, when the command to run a Python program is given to the interpreter, the code that is at level 0 indentation is to be executed. However, before doing that, interpreter will define a few special variables. _name_ is one such special variable which by default stores the name of the file.

If the source file is executed as the main program, the interpreter sets the _name_ variable to have a value as ” main ” name is a built-in variable which evaluates to the name of the current module. Thus it can be used to check whether the current script is being run on its own.

For example consider the following
if_name_==’_main_’:
main(sys.argv[1:])
if the command line Python program itself is going to execute first, then _main_ contains the name of that Python program and the Python special variable _name_ also contain the Python program name. If the condition is true it calls the main which is passed with C++ file as argument.