Question 1.
Who are Foreign Institutional Investors?
Answer:
Fils are the investments made by an individual investor or an investment fund, into the financial markets of another nation. Organisations like hedge funds, insurance companies, pension funds and mutual funds can be called as institutional investors.

Question 2.
What is a Depository Receipt?
Answer:

Question 3.
What is a GDR (Global Depository Receipt)?
Answer:
GDR is an instrument issued abroad by a company to raise funds in some foreign currencies and is listed and traded on a foreign stock exchange.

Question 4.
What is an American Depositary Receipt (ADR)?
Answer:
ADR is a dollar denominated negotiable certificate representing a non-US company in US market which allows the US citizens to invest in overseas securities.

Question 8.
Explain any three disadvantages of FDI.
Answer:
(i) Exploiting Natural Resources:
The FDI Corhpanies deplete natural resources like water, forest, mines etc. As a result such resources are not available for the usage oN common man in the host country.

(ii) Heavy Outflow of capital:
Foreign companies are said to take away huge funds in the form of dividend, royalty fees etc. This causes a huge outflow of capital from the host country.

(iii) Not Transferring Technology:
Some foreign enterprises do not transfer the technology to developing countries. They mostly transfer second hand technology to the host country. 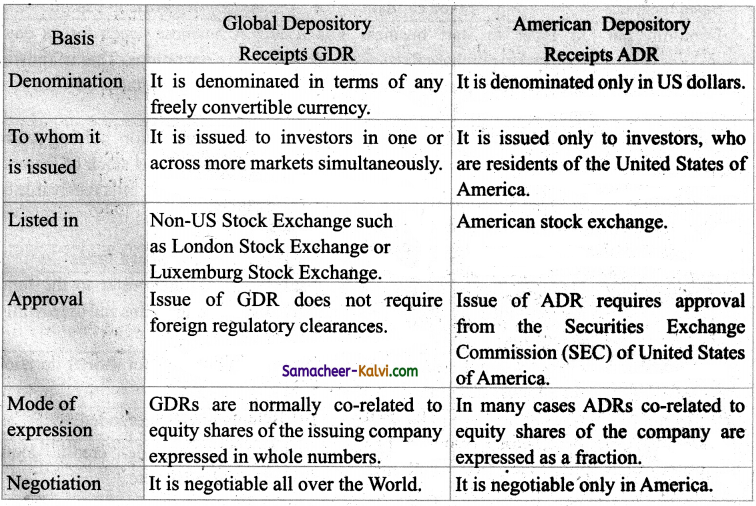 Question 14.
Explain any five advantages of FDI.
Answer:
(i) Achieving Higher Growth in National Income:
Developing countries get much needed capital through FDI to achieve higher rate of growth in national income.

(ii) Help in Addressing BOP Crisis:
FDI provides inflow of foreign exchangeresources into a country. This helps the country to solve adverse balance of payment position.

(iii) Faster Economic Development:
FDI brings technology, management and marketing skills along with it. These are crucial for achieving faster economic development of developing countries.

(v) Encouraging Competition in Host Countries:
Entry of FDI into developing country promotes healthy competition therein. This leads to enterprise in developing countries operating efficiently and effectively in the market. Consumers get a variety of products of good quality at market determined price which usually benefits the customers.

Question 15.
Role of World Bank in globalization.
Answer:
The Bretton woods institutions the IMF and World Bank have an important role to play in making globalization work better. They were created in 1944 to help restore and sustain the benefits of global integration by promoting international economic co-operation.

Question 17.
Possibilities of making the western and American countries in favour of Indian Depository Receipt (IDR).
Answer:
An IDR is meant to diversify your holding across regions to free you from a region bias or the risk of a port folio getting too concentrated in the home market you need to study the firms. Financials before you buy its IDR.

→ International finance is a branch of financial economics that deals with the monetary interaction that occur between two or more – countries. This section is concerned with topics that include foreign direct investment and currency exchange rate. It involves issues pertaining to financial management such as political and foreign exchange risk that comes with managing multinational corporation.

→ International finance place on important role ADRs are issued in the international trade and in the sphere of
exchange of goods and services among the nations.

→ It helps in comparing the inflation rates. It help in ascertaining the economic status of various countries. International finance organisation such as IMF, world bank etc. Mediate and resolve financial disputes among member nations.