A. Identify the speaker / character.

Question 1.
Even though I clearly said “no”!
Answer:
Dr. Krishnan

Question 2.
The one that spits deadly poison straight into its opponent’s eyes.
Answer:
Maya

B. Read the story again and write how these characters reacted in these situations.

Question 1.
“You’re both quite mistaken”.
Answer:
Dr. Krishnan hastened to explain
Mrs. Krishnan was horrified on hearing about zigzag.

Question 3.
“Just wait till zigzag settles down in this new home”.
Answer:
Visu comforted everyone.
Aravind and Maya were disappointed as the bird didn’t talk.

Question 4.
“Zigzag hardly ever sleeps”.
Answer:
Somu sent an e-mail to Dr.Krishnan about Zigzag.
Dr.Krishnan predicted it as ridiculously simple.

Question 5.
“You are an absolute treasure…”
Answer:
Dr. Krishnan sighed and spoke to zigzag Zigzag didn’t bother to reply.

C. Complete the given tabular columns. 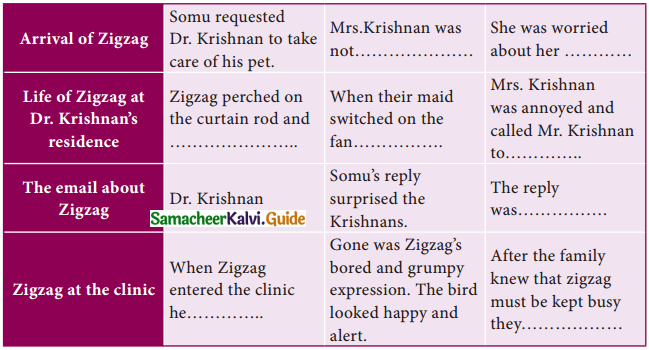 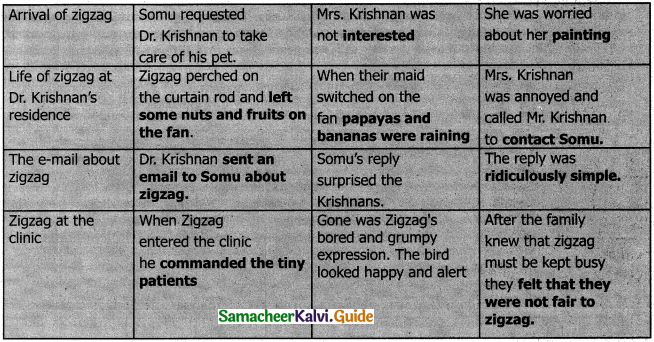 D. Answer the following questions in one or two sentences.

Question 1.
Why did Dr. Ashok’s cousin call him?
Answer:
Dr. Ashok Krishnans cousin Somu called him to shelter Zigzag, his pet bird, when he left for Alaska.

Question 3.
What are pets did Somu have?
Answer:
Somu had a giant green and gold fighting beetle and an African snake.

Question 4.
What was Mrs. Krishnan busy with?
Answer:
Mrs. Krishnan was busy with her paintings to be displayed for sale the following week.

Question 5.
What commotion did the boomerang cause in the neighbourhood?
Answer:
Boomerang sliced through all the TV aerials in the neighborhood. It caused permanent damage to several cars in the parking lot. It also knocked out their watchman cold with the force thrown by Arvind.

Question 6.
What happened when Somu left zigzag with the Krishnan’s?
Answer:
Zigzag deposited the walnuts and fruits to the Chandelier and transferred them all the blades of the ceiling fan. Then it perched on the curtain rod and went off to sleep.

Question 8.
What was the e-mail message sent to Somu by Dr. Krishnan?
Answer:
Dr. Krishnan sent an email to Somu, asking for instructions on how to stop zigzag from snoring.

Question 9.
What did Aravind confess?
Answer:
Arvind confessed that for the first time in his life, he was actually looking forward to go to school. The school was as calm as a monastery compared to their house.

E. Answer the following questions in about 100-150 words:

Question 1.
Write a passage in your own words the various commotions caused by zigzag at Dr. Krishnan’s
Answer:
When Visu, the old cook of Dr. Somu brought Zigzag to Dr. Krishnan’s house, all were surprised to see such a strange and weird bird. It was a foot and a half tall. It was a multilingual talking- singing bird. It could talk and sing in twenty-one languages.

When it refused to say a word, Arvind brought some juicy fruits and nuts for the bird. It did not eat them but transferred one ‘ by one to the chandelier and on to the blades of the ceiling fan. Then it perched on a curtain rod, it sank his beak into plumpy guava and then went off to sleep. Then he began to snore. The snore became louder and very louder.

His snoring pounded their eardrums till their heads ached. When the fan was switched on by their maid, the painting of Mrs. Krishnan got spoilt by streaks of orange pulp spreading on it. His snoring troubled all the neighbors and they were complaining about it.

Dr. Somu left for Alaska. He had a pet bird. He sent it to Dr. Krishnan’s house through his old cook Visu. His name was Zigzag. All were surprised to see the strange bird. He was one and a half foot tall. He could talk and sing in 21 languages. But he did not speak a word. Aravind brought juicy fruits and nuts for zigzag.

He transferred them to the chandelier and on to the fan plates. He perched on the curtain rod and started sleeping and snoring. The snore became louder. It pounded their eardrums causing headaches. When the fan was switched on, the streaks of orange pulp spread on Mrs. Krishnan’s painting. It was spoilt. His snoring troubled all the neighbours and they were complaining about it.

Question 2.
What happened when zigzag was taken to the clinic?
Answer:
Introduction:
Zigzag created lot of misunderstandings in Dr. Krishnan’S house. So he wanted to take zigzag to his clinic. Let us see below what happens in the clinic.

Zigzag’s behaviour:
The strange sound was zigzag’s clear and commanding voice. There was complete silence in the clinic. Dr, Krishnan was amazed. Zigzag’s bored and grumpy expression was gone. He went about the job.

Dr. Krishnan took Zigzag to the clinic. He asked him to wait in the car. He warned him not to sleep. But he was not used to being kept waiting. So he went into the clinic and perched on the reception table. Dr. Krishnan heard a voice when he hardly walked into his clinic. It was Zigzag’s clear and commanding voice.

There was silence in the room. Everyone waited, open mouth for his next sentence. Dr. Krishnan was amazed. Zigzag’s bored and grumpy expression was gone. Instead he looked happy and alert. He went about the job. He had been trained for the job with the doctors. The clinic became a calm and orderly place without any confusion. Zigzag efficiently comforted the frightened patients.

Question 3.
Narrate the story zigzag in your own words.
Answer:
This story is about a multilingual weird bird, named Zigzag. Dr. Krishnan’s clinic usually sounded noisy because of the shouting and crying of children. His friend Dr. Somu requested him to shelter Zigzag, his pet as he was about to leave for Alaska.

When Zigzag was brought to his house, it did not speak to anyone. It could sing and talk in 21 different languages. But it did not speak any word to them. Instead, he transferred the fruits and nuts given to him to a Chandelier and to the blades of the ceiling fan. It perched on a curtain rod and went off to sleep. When the fan was switched on, all the fruits and nuts fell down.

The papaya slice splattered on the painting of Mrs. Krishnan and spoiled it. Mrs. Krishnan was irritated and persuaded Dr. Krishnan to send the bird away to Visu s house. So Dr. Krishnan took the bird to his clinic. There it commanded everyone in an orderly way. He brought peace, calmness and a disciplined atmosphere in the clinic. The painting which had been spoilt by Zigzag was sold out for ₹ 5,000. It was bought because the new technique in painting was liked by the buyer. Thus Mr. Krishnan’s family invited Zigzag to stay with them for another week.

This is a story about Zigzag, a multilingual bird. Dr. Somu who left for Alaska asked Dr. Krishnan to shelter him. Visu brought him to Dr. Krishnan’s house. He did not speak to anyone though he could talk and sing in 21 languages. Instead, he transferred the fruits and nuts to a chandelier and the fan plates.

Then he perched on a curtain rod and went to sleep. When the fan was switched on the fruit slices fell off spoiling the painting of Mrs. Krishnan. She got irritated and told her husband to send Zigzag to Visu’s house. Dr. Krishnan took him to his clinic.

Zigzag commanded the patients and the clinic became a calm and orderly place. The spoilt painting was sold for Rs. 5000. The buyer considered it as a new technique of painting. Mrs. Krishnan wanted to keep Zigzag for another week.