Question 6.
A landmass bounded by sea on three sides is referred to as ………
(a) Coast
(b) Island
(c) Peninsula
(d) Strait
Answer:
(c) Peninsula

Question 4.
The great ludian desert ii called Marusthall.
Answer:
The Thar desert, also known as the Great Indian desert is a large arid region in the north
western part of the Indian Subcontinent that covers an area of 2,00,000 Km2 and forms a natural boundary between India and Pakistan.
Marusthali means sand-dune. It covered eastern portion of the Great indian Thar Desert in western Rajasthan. It extends over about 24,000 square miles north of the Luni River.

Question 6.
The river Godavari is often referred to as Vridha Ganga.
Answer:

IV. Distinguish between the following

Question 2.
Give the importance of IST.
Answer:
To avoid the confusion of time in different states of India. One meridian is taken to have a uniform time for a whole country. Therefore 80° 30′ E has been chosen as the Standard Meridian of India which is almost passing from the centre of India.

Question 5.
Write a brief note on the island group of Lakshadweep.
Answer:

VI. Answer In a paragraph

Question 1.
Explain the divisions of the Northern Mountains and its importance to India.
Answer:

Question 2.
Give an account on the major peninsular rivers of India.
Answer:

Question 3.
Give a detailed account on the basin of the Ganga.
Answer:

Mark the following in the outline map of India 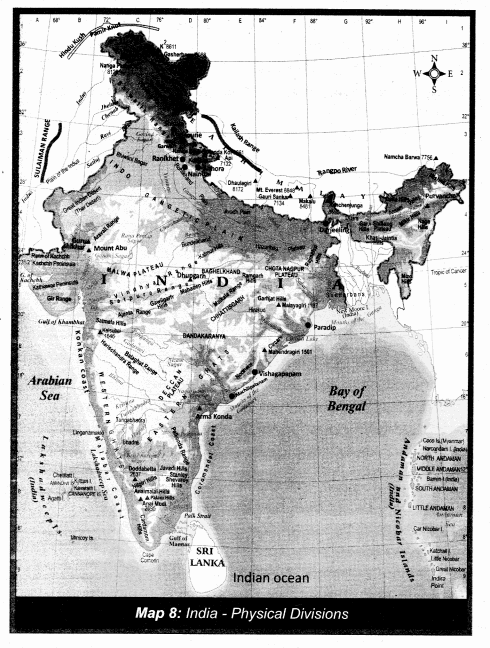 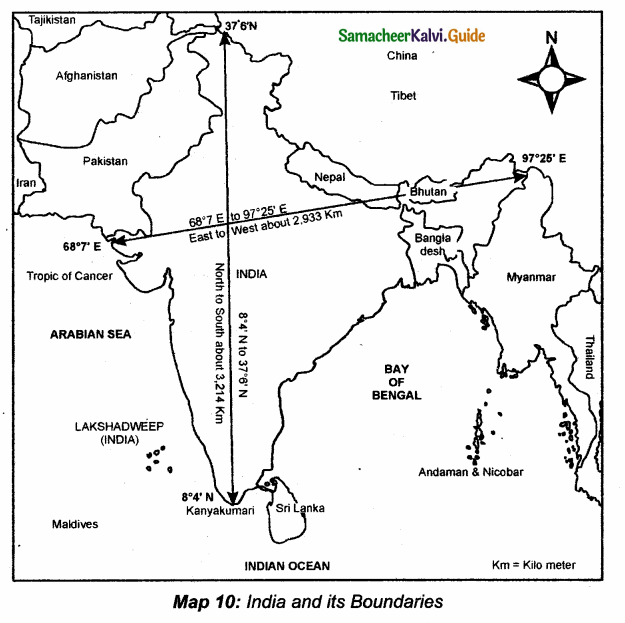 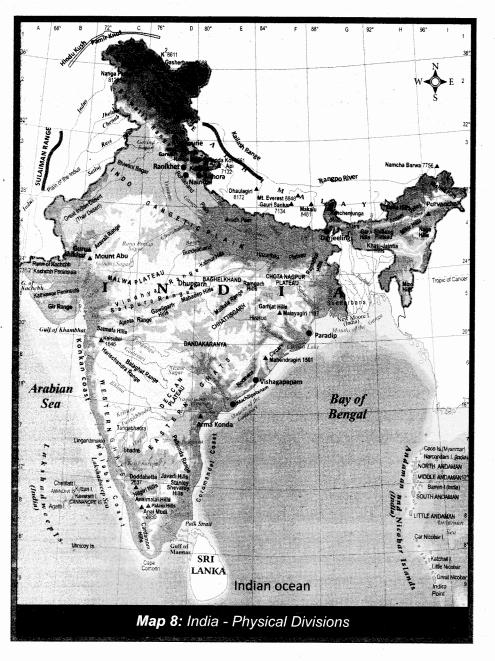 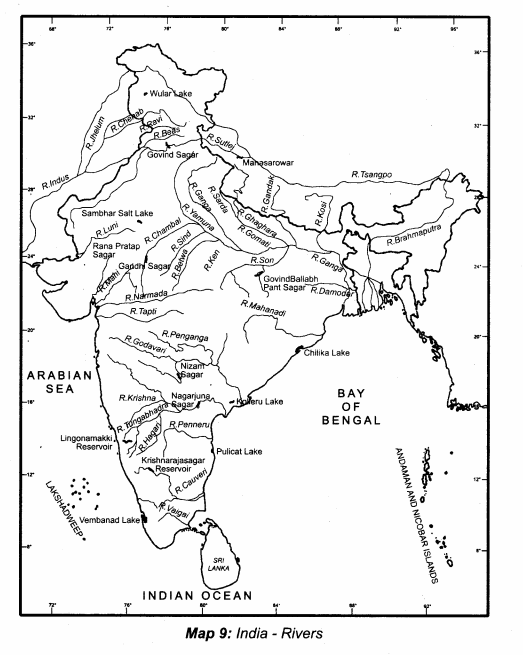 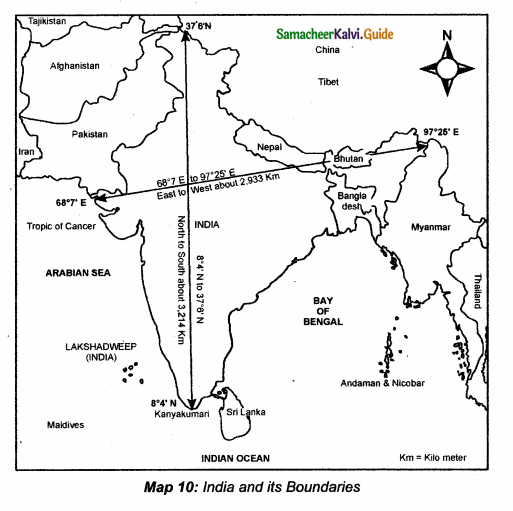 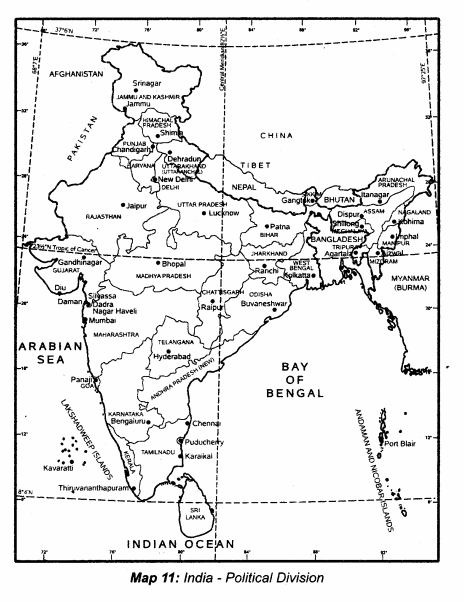 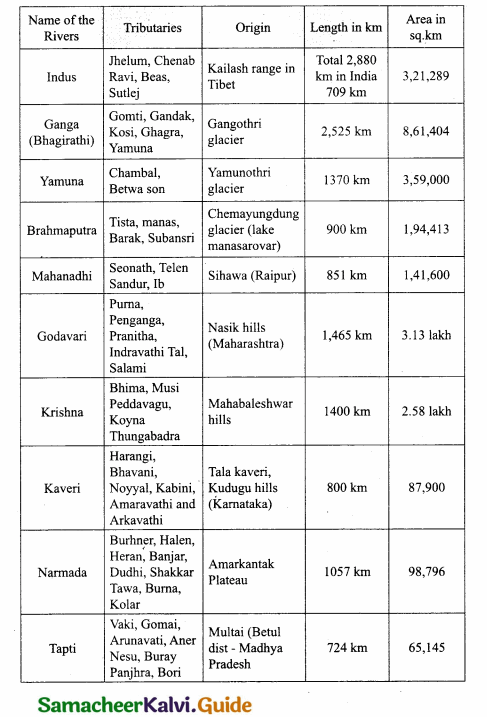 Union Territories along eastern coast are:

Question 2.
Area wise which is the largest and the smallest state?
Answer:

Question 3.
The states which do not have an international border or lie on the largest state.
Answer:
Haryana, Madhya Pradesh, Jharkhand, Chattisgarh.

Question 4.
Classify into four groups each having common frontiers with

Question 5.
Find the Hill stations which are located in the Himalayan Mountains.
Answer:
Major hill stations of the Himalayas are Shimla, Mussoorie, Nainital, Almora, Ranikhet and Darjeeling.

Question 2.
Along with Hindukush and Karakoram range ……… provide a natural boundary in the
north.
(a) Aravalli
(b) Satpura
(c) Himalayas
Answer:
(c) Himalayas

Question 6.
The …….. land gets abundance sunshine from the sun.
(a) mediterranean
(b) tropical
(c) equatorial
Answer:
(b) tropical

Question 1.
Peninsular Rivers are Non-Perennial.
Answer:
Peninsular rivers originate from the Western Ghats. They have a large seasonal fluctuation in the volume of water as they are solely fed by the rain. So these Rivers are seasonal and non-perennial.

Question 2.
Andaman and Nicobar islands have dense forests.
Answer:
Since these islands lie close to the equator, the climate remains hot and wet throughout the year and has dense forests.

IV. Distinguish between the following

Question 2.
Name the boundaries of India.
Answer:
India is bounded by Bay of Bengal on the East, Arabian sea on the West, Indian ocean in the South and the lofty Himalayas in the North

Question 5.
Why is India called a Sub-continent? How it is separated?
Answer:

Question 8.
How has Northern Plain become a fertile Plain?
Answer:
The plain is formed of alluvial soil. The deposition of alluvium in a large basis lying at the foothills of the Himalayan over millions of years make northern plains fertile.

VI. Answer in a paragraph

Question 1.
India is a Sub-Continent. Prove it.
Answer:

All these distinctive continental characteristic are found in India. Hence we consider India as a Sub-Continent.

Question 2.
Name the old fold mountain in India and write a brief note on it.
Answer:

Question 4.
Write in general about the structure of the Peninsular plateau.
Answer:

Question 1.
Mark the following in the outline map of India.