Question 3.
What type of transpiration is possible in the xerophyte Opuntia?
(a) Stomatal
(b) Lenticular
(c) Cuticular
(d) All the above
Answer:
(b) Lenticular

Question 6.
If the concentration of salt in the soil is too high and the plants may wilt even if the field is thoroughy irrigated. Explain
Answer:
High salt concentration results in high be osmotic potential of the soil solution, so the plant has to use more energy to absorb water. Under extreme salinity conditions, plants may be unable to absorb water and will wilt even if the surrounding soil is thoroughly irrigated. This is also referred to as the osmotic or water deficit effect of salinity.

Question 9.
What are the parameters which control water potential?
Answer:
1. Slatyer and Taylor (1960) introduced the concept of water potential.
Definition – water potential is the potential energy of water in a system – compared to pure water when temperature and pressure are kept constant.

2. It is also a measure of how freely water molecules can move in a particular environment or system. Water potential is denoted by the Greek symbol  Ψ (psi) and measured in Pascal (Pa). At standard temperature, the water potential of pure water is zero

3. Addition of solute to pure water decreases the kinetic energy thereby decreasing the water potential, from zero to negative.

Question 10.
An artificial cell made of selectively permeable membrane immersed in a beaker (in the figure) Read the values and answer the following questions? 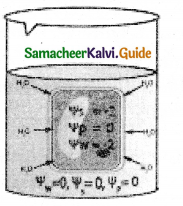 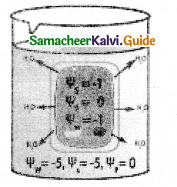 (b) Outside solution in hypotonic.
(c) The cell is hypertonic.
(d) The cell becomes more turgid.
(e) The process is endo – osmosis because the solvent (water) moves inside the cell.

I – Choose The Correct Answers

Question 2.
The smell from a lightened incense stick or mosquito coil or open perfume bottle in a closed room is due to
a) Osmosis
b) Facilitated diffusion
c) Simple diffusion
d) imbibition
Answer:
c. Simple diffusion

Question 5.
The swelling of dry seeds is due to a phenomenon called:
(a) osmosis
(b) transpiration
(c) imbibition
(d) none of the above
Answer:
(c) imbibition

Question 8.
Water potential is influenced by which of the two factors among the given four
I) Concentration
II) Pressure
III) Temperature
IV) gravity
a) I & II
b) II & III
c) III & IV
d) I & IV
Answer:
a) I & II

Match The Following & Find Out The Correct Order 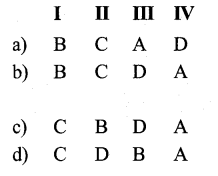 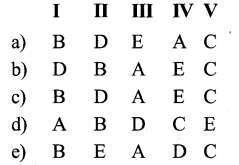 Question 24.
A membrane that permits the solvent and not the solute to pass through it is termed is
a) Permeable,
b) impermeable
c) semipermeable
d) differentially permeable
Answer:
c. Semi permeable

Question 25.
Who did observe that stomata open in light and close in the night:
(a) Unger
(b) Sachs
(c) Boehm
(d) Von Mohl
Answer:
(d) Von Mohl

Question 27.
If a cell kept in a solution of unknown concentration gets deplasmolysed the solution is
a) hypotonic
b) hypertonic
c) isotonic
d) detonic
Answer:
a. hypotonic

Question 30.
The osmotic pressure of cell sap is maximum in
a) Hydrophytes
b) Halophytes
c) Xerophytes
d) Mesophytes
Answer:
b. Halophytes

Question 31.
Say true or false and on that basis choose the right answer.
I) In facilitated diffusion, molecules move across the cell membrane with the help of special proteins, with the expenditure of energy
II) Porin is a larger transport protein, facilitates smaller molecules to pass through.
III) Aquaporins are recognized to transport urea, CO2, NH3 metalloid & ROS
IV) The carrier proteins structure does not get modified due to its association with the molecules

Question 45.
Supply ends in transport of solutes are
a) green leaves
b) root and stem
c) xylem and phloem
d) Hormones and enzymes
Answer:
c. Xylem and phloem

Question 46.
For guttation in plants, the process responsible is
a) Root pressure
b) Atmospheric pressure
c) Imbibition
d) None of these
Answer:
a. Root pressure

Question 48.
Which of the following plant material is an efficient water imbibant?
a) Lignin
b) Pectin
c) Cellulose
d) Agar
Answer:
d. Agar

Question 49.
Which of the following helps in the Ascent of sap?
a) Root pressure
b) Transpiration
c) Capillarity
d) All the above
Answer:
d. All the above

Question 50.
In a girdled plant which of the following dies first?
a) Shoot
b) root
c) Both die simultaneously
d) None – the plant survives
Answer:
b. root

Question 52.
Assertion: – A In rooted plant, the transport of water and minerals in xylem is essentially multi-directional
Reason – R Organic compound and nuitrient undergoes undirectional transport only
Answer:
d) Both A and R are false

Question 53.
Assertion: – A The adsorption of water by solid particles of an adsorbant with out forming a solution is known as imbibition
Reason: – R The liquid which is imbided is known as imbibate
Answer:
b) Both A and R are true but R is not the correct explanation of A

Question 55.
Assertion – A: Xylem a principal water conducting ’
Reason -R: It has been recognised by girdling or ringing experiments
Answer:
a) Both A and R are True R is the correct explanation of A

Question 56.
Assertion: – A In phloem, sugar are translocated in non reducing form
Reason – R Non reducing sugars are most reactive sugars
Answer:
c) Assertion is true but Reason is false

Question 57.
Assertion: AIn ringing experiment a narrow continuous band of tissues external to the phloem is removed
Reason: R Ringing experiment proves that phloem is involved in water transport ’
Answer:
d) Both A and R are false

Question 1.
What is the need for the transport of materials in plants?
Answer:
Water absorbed from roots must travel up to leaves by xylem for food preparation by photosynthesis. Likewise, food prepared from leaves has to travel to all parts of the plant including roots.

Question 4.
The touch me plant closes its leaves at the touch – Explain.
Answer:

Question 5.
What is meant by Porin?
Answer:
Porin is a large transporter protein found in the outer membrane of plastids, mitochondria and bacteria which facilitates smaller molecules to pass through the membrane. 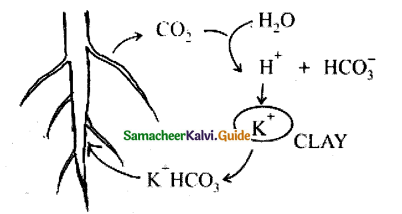 Question 13.
What is meant by osmotic pressure?
Answer:
When a solution and its solvent (pure water) are separated by a semipermeable membrane, the pressure is developed in the solution, due to the presence of dissolved solutes. This is called osmotic pressure (OP).

Question 16.
Why plants transport sugars as sucrose and not as starch or Monosaccharide (Glucose & Fructose)
Answer:

Question 18.
Identify the diagram and Neatly label the parts
Answer: 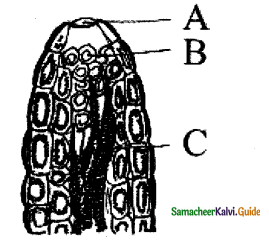 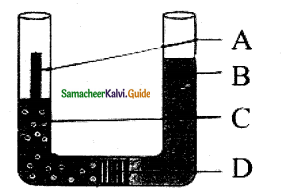 Question 20.
Differentiate between Ascent of sap and Translocation of solute.
Answer:

Question 24.
Give notes an Aquaporin.
Answer:

Question 25.
Define the term Ion – Exchange.
Answer:
Ions of external soil solution are exchanged with the same charged (anion for anion or cation for cation) ions of the root cells.

Question 26.
A. Differentiate between Cohesion and Adhesion and
B. Add a note on their significance.
Answer:
A.

B. The cohesive and Adhesive forces work together to form an unbroken continuous water column in xylem.
The magnitude of cohesive force is much high (350 atm) and is more than enough to ascent sap in the tallest
trees.

Question 2.
Differentiate between osmotic pressure it and osmotic potential
Answer:

Question 3.
Do you have an R.O. Purifier ¡n your house? Explain the principle behind it.
Answer: 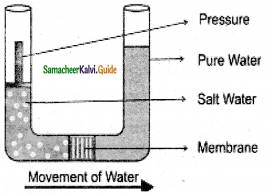 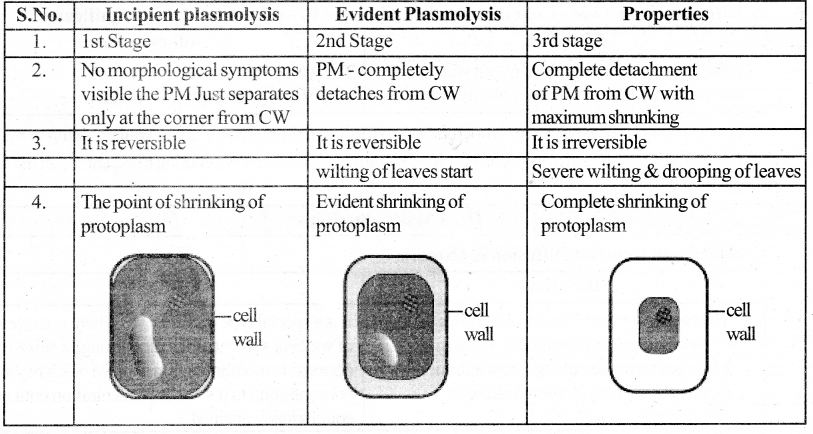 Question 5.
Define Antitranspirant.
Answer:
Antitranspirant is any material applied to plants to retard or reduce the rate of transpiration – without disturbing the process of gaseous exchange, for respiration and photosynthesis.
Eg. Colourless plastics silicone oil and low viscosity waxes.

Question 6.
What are the inducers of stomatal closure.
Answer:

Question 7.
Fill in the blanks in the tabulations given below

Answer:
1) Inhibit the movement of both solvent and solute molecules
2) Semipermeable
3) Tonoplast & plasmalemma

Question 9.
Give the flow chart to cell to cell transport in plants.
Answer:

Question 11.
Explain Phloem loading?
Answer:
Definition:
The products of Photosynthesis from the Mesophyll of leaves to sieve elements of phloem is known as phloem loading. (Just like the cement sack manufactured in a factory being loaded in a vehicle to be transported the respective site)
It involves 3 steps.
Step I:

Question 12.
Explain the theory of photosynthesis in guard cells observed by Von Mohl with its demerits.
Answer:
Von Mohl (1856) observed that stomata open in light and close in the night. According to him, chloroplasts present in the guard cells photosynthesize in the presence of light resulting in the production of carbohydrate (Sugar) which increases osmotic pressure in guard cells. It leads to the entry of water from other cells and the stomatal aperture opens. The above process vice versa in the night leads to the closure of stomata.

Question 1.
Explain ‘routes’ of Water Absorption in the roots.
Answer:

I. Apoplast ( GK – Apo – Away) Everything external to PM
1. Cell walls
2. Extra Cellular Space
3. Interior of dead cells (vessel elements Tracheids)
Movement is continuous exclusively through the cell wall or nonliving part of the plant without crossing any membrane.

II. Symplast (GK – Sym = within)
Entire mass of cytosol of all the living cells in a plant + plasmo desmata + inter connecting cytoplasmic channel.
In the movement water has to cross PM, to enter cytoplasm of outer root cell; then move within adjoining
cytoplasm through plasmodesmata around the vacuoles without the necessity to cross more membrane it reaches xylem. 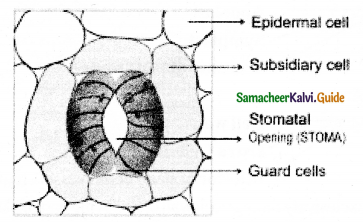 Procedure:
Take a peeled potato tuber and make a cavity inside with the help of a knife fill the cavity with concentrated sugar solution and mark the initial level.
Place this set up in a beaker containing pure water After 10 minutes observe the sugar solution level and record your observation.

Observation:
There is rise in the level of the solution. in the cavity of the tuber due to osmosis
Inference: Osmosis has occured, through the potato osmoscope 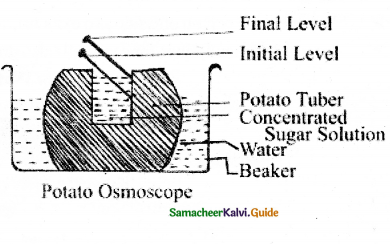 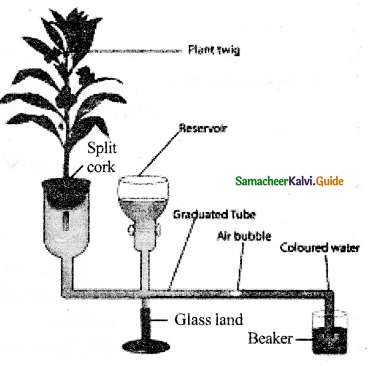 An air bubble is introduced into the graduated tube at the narrow end. Keep the apparatus in bright sunIght
and observe

Observation:
As the twig transpires, the air bubble move towards the twig.
This loss is compensated by water ohsorption from the beaker.

Question 5.
Explain Mechanism of Translocation by Munch Mass flow Hypothesis
Answer:
Munch – Proposed it in 1930 Crafts – elaborated it in 1938
Definition: Organic substances (solute) move from a region of high osmotic pressure (mesophyll) to
region of low OP along TP gradient.

Question 6.
Explain the theory of K+ transport – or Explain the mechanism of stomatal movement
Answer:
Introduction:
Levit (1974) – Proposed it
Raschke (1975) – Elaborated it
Steps:

The Assumptions of Cytochrome pump theory: 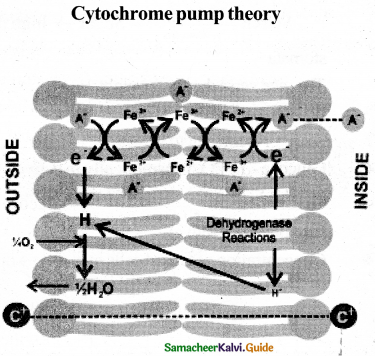 Question 8.
Explain the opening and closing of stomata by a starch – sugar – Interconversion theory.
Answer:
i) Lloyd (1908)
According to him, turgidity of Guard cell is due to interconversion of starch → sugar

ii) Sayre (1920)
According to him, the pH of Guard cell determine opening and closing of stomata

iii) Hanes (1940)
According to Hanes – Enzyme phosphorylase is responsible for starch sugar conversion in the guard cells.