Question 7.
Which of the following plan has focussed on the agriculture and rural economy?
a) People’s Plan
b) Bombay Plan
c) Gandhian Plan
d) Vishveshwarya Plan
Answer:
c) Gandhian Plan

Question 10.
Which of the following country adopts indicative planning?
a) France
b) Germany
c) Italy
d) Russia
Answer:
b) Germany

Question 13.
The basic philosophy behind long – term planning is to bring ………………. changes in the economy?
a) Financial
b) Agricultural
c) Industrial
d) Structural
Answer:
c) Industrial

Question 26.
What are the social indicators of economic development?
Answer:
Social Indicators: 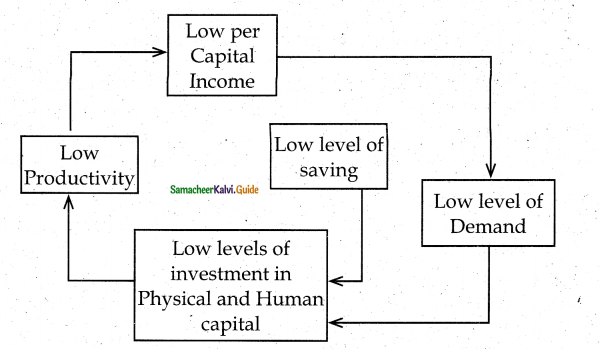 Question 29.
What are the non-economic factors determining development?
Answer:

Question 30.
How would you break the vicious circle of poverty?
Answer:

(I) Sir M. Vishveshwarya (1934):
A prominent engineer and politician made his first attempt in laying the foundation for economic planning in India in 1934 through his book, “Planned Economy of India”. It was a 10-year plan.

(II) Jawaharlal Nehru (1938):
Set-up “National Planning Commission” by a committee but due to the changes in the political era and Second World War, it did not materialize.

(III) Bombay Plan (1940):
The 8 leading industrialists of Bombay presented the “Bombay Plan”. It was a 15 Year Investment Plan.

(V) M.N. Roy (1945):
Drafted ‘People’s Plan”. It was aiming at the mechanization of agricultural production and distribution by the state only.

(VI) J.P. Narayan (1950):
Advocated, “Sarvodaya Plan” which was inspired by the Gandhian Plan and with the idea of Vinoba Bhave. It gave importance not only for agriculture but encouraged small and cottage industries in the plan.

The economic planning is justified on the following grounds:-

(II) Shared National Agenda:
To evolve a shared vision of national development priorities and strategies with the active involvement of States.

(III) Decentralized Planning:
To restructure the planning process into a bottom-up model.

(V) Network of Expertise:
To mainstream external ideas and expertise into government policies and programmes through collective participation.

(VI) Harmonization:
To facilitate harmonization of actions across different layers of government, especially when involving cross-cutting and overlapping issues across multiple sectors; through communication, coordination,
collaboration, and convergence amongst all the stakeholders.

(VII) Conflict Resolution:
To provide a platform for mutual consensus to inter-sectoral, interdepartmental, interstate as well as center-state issues for all speedy execution of the government programmes.

(VIII) Coordinating Interface with the World:
It will act nodal point to harness global expertise and resources coming from International organizations for India’s developmental process.

(IX) Internal Consultancy:
It provides internal consultancy to Central and State governments on policy and programmes.

(XI) Monitoring and Evaluation:
It will monitor the implementation of policies and progammes and evaluate the impacts.

Answer the following questions in about a page

2. Capital Formation:-
Capital formation refers to the net addition to the exist¬ing stock of capital goods which are either tangible like plants and machinery or intangible like health, education and research.

3 Size of the Market:-
Large size of the market would stimulate production,increase employment and raise the National per capita income.

5. Financial System:-
Financial system implies the existence of an efficient and organized banking system in the country.

6. Marketable Surplus :-
Marketable surplus refers to the total amount of farm output cultivated by farmers over and above their family consumption needs. This is a surplus that can be sold in the market for earning income.

7. Foreign Trade:-
The country which enjoys favourable balance of trade is always developed. It has huge forex reserves and stable exchange rate.

Question 36.
Describe different types of Planning.
Answer:
(I) Democratic Vs Totalitarian:
A form of rule in which the government attempts to maintain ‘total’ control over society, including all aspects of the public and private lives of its citizens.

(III) Planning by Direction Vs Inducement:
Under planning by direction, there is a central authority which plans, directs and orders the execution of the plan in accordance with pre-determined targets and priorities.

(VI) Financial Vs Physical Planning:
Financial planning refers to the technique of planning in which resources are allocated in terms of money while physical planning pertains to the allocation of resources in terms of men, materials and machinery.

(VII) Functional Vs Structural Planning:
Functional planning refers to that planning seeks to remove economic difficulties by directing all the planning activities within the existing economic and social structure.

(VIII) Comprehensive Vs Partial Planning:
General planning which concerns itself with the major issues for the whole economy is known as comprehensive planning whereas partial planning is to consider only a few important sectors of the economy.

1. Loss of Freedom:
The absence of freedom in decision making may acts as an obstacle for economic growth. Under planning, the crucial decisions are made by the central planning Authority. The consumers, producers and the workers enjoy no freedom of choice. Therefore, Hayek explains, that centralized planning leads to loss of personal freedom and ends in economic stagnation. The decisions by the Government are not always rational Freedom to private producers will be misused, Profit will be given top priority, welfare will be relegated.

2. Elimination of Initiative:
Under centralized planning, there will be no incentive for initiatives and innovations. Planning follows routine procedure and may cause stagnation in growth.

3. High cost of Management:
The cost of management of the economic affairs outweights the benefits of planning. Inadequate data, faulty estimations and improper implementation of plans result in wastage of resources and cause either surplus or shortages.

VI. Pick the odd one out:

VIII. Fill in the blanks with the correct option.

Question 3.
Capital is a necessary but not a sufficient condition of progress is a statement of …………………….
a) Thomas piketty
b) Douglas c. North
c) Schumpeter
d) Ragnar Nurkse
Answer:
d) Ragnar Nurkse

Question 3.
The better we try to plan, the more planners we need’ is the statement of ………………………..
a) Thomas piketty
b) Douglas c. North
c) Ragnar Nurkse
d) Arthur Lewis
Answer:
d) Arthur Lewis

X. Answer the following in one or two sentences.

Question 2.
State the meaning of Under development.
Answer:
The term underdevelopment refers to that state of an economy where levels of living of masses are extremely low due to very low levels of per capita income, resulting from low levels of productivity and high growth rate of population.

Question 4.
What are the pillars of NITI Aayog?
Answer:

Question 6.
What is GNP Per Capita?
Answer:
It relates to an increase in per capita real income of the economy over a long period.

Question 7.
Define “Sarvodaya plan”?
Answer:
“Sarvodaya Plan” was inspired by the Gandhian Plan and with the idea of Vinoba Bhave.
It gave importance not only to agriculture but encouraged small and cottage industries in the plan.

(I) Gross National Product (GNP):
1. GNP is the total market value of all final goods and services produced within a nation in a particular year, plus income earned by its citizens (including income of those located abroad), minus income of non-residents located in that country.

2. GNP is one measure of the economic condition of a country, under the assumption that a higher GNP leads to a higher quality of living, all other things being equal.

Question 5.
Explain the concepts of NITI Aayog.
Answer:
Initiatives like the Atal Innovation mission, the Ayushmaan Bharat approach towards water conservation measures, and the draft bill to establish the National Medical Commission to replace the medical council of India have all been conceptualized in NITI Aayog.

1. To accelerate and strengthen market mechanism:
The market mechanism works imperfectly in underdeveloped countries because of ignorance and unfamiliarity with it. A large part of the economy comprises the non – monetized sector. The product, factor, money, and capital markets are not organized properly. Therefore the planned economy will be a better substitute for a free economy.

2. To remove unemployment
The need for planning in underdeveloped countries is further stressed by the necessity of removing widespread unemployment and disguised unemployment in such economies.

To remove poverty and inequalities:
Planning is the only path open to underdeveloped countries, for raising national and per capita income, reducing inequalities and poverty, and increasing employment opportunities.