Question 3.
The establishment of ______ empire changed the administrative and institutional structure of south India.
(a) Bahmani
(b) Vijayanagar
(c) Mughal
(d) Nayak
Answer:
(b) Vijayanagar

III. Find out the correct statement

Question 1.
(i) The establishment of the Vijayanagar Kingdom witnessed the most momentous development in the history of South India.
(ii) The Saluva dynasty ruled for a longer period.
(iii) The rulers of Vijayanagar a had smooth relations with the Bahmani Sultanate.
(iv) Rajput kingdoms attracted migrants from Persia and Arabia.
Answer:
(i) is correct

Question 2.
(i) The Nayak Kingdom came up in Senji.
(ii) The appointment of Telugu Nayaks resulted in the migration of Telugu-speaking people from Madurai.
(iii) Mughal Empire started declining from the time of Jahangir.
(iv) The Europeans came to India in search of slaves.
Answer:
(i) is correct

Question 3.
(i) Mythical geneologies were collected by Col. Mackenzie.
(ii) Indigo was the most important beverage crop in India.
(iii) Mahmud Gawan was the minister in Alauddin Khalji’s kingdom.
(iv) The Portuguese built their first fort in Goa.
Answer:
(i) is correct

Question 2.
Who founded the Vijayanagar Kingdom? Mention the dynasties that ruled over the kingdom.
Answer:

Question 3.
Mention the two natural advantages that India had in cotton weaving.
Answer:
India had two natural advantages in cotton weaving. The first was that cotton grew in almost all parts of India, so that the basic raw material was easily available. Second, the technology of producing a permanent colour on cotton using vegetable dyes was known from very early times in India.

Question 4.
What were the factors which facilitated urbanization?
Answer:

Question 5.
What is sericulture?
Answer:

VI. Answer all the questions given under each caption.

Question 1.
The arrival of the Europeans
(a) Who controlled the spice trade from India?
What enabled the Portuguese to have control over maritime trade over the entire region?
(c) How were the trading activities of the Europeans carried on in India?
(d) Mention the enclaves of the Dutch, the English, the French and the Danes in India.
Answer:
(a) The spice trade from India was controlled by Muslims up to Alexandria.
(b) Because of their naval superiority, the Portuguese were able to conquer many ports from east Africa up to Malacca, and could effectively control the maritime trade.
(c) The trade activity of the Emperor were carried on through respective East India
Companies.
(d) The Dutch were in Pulicat (apd later Nagapatnam), the English in Madras, the French in Pondicherry and the Danes in Tarangampadi.

Question 3.
“Chola Period was an enterprising period In the history of Tamil Nadu” – Elucidate.
Answer:

Question 1.
On the outline map of India mark the important places of medieval India.
Answer: 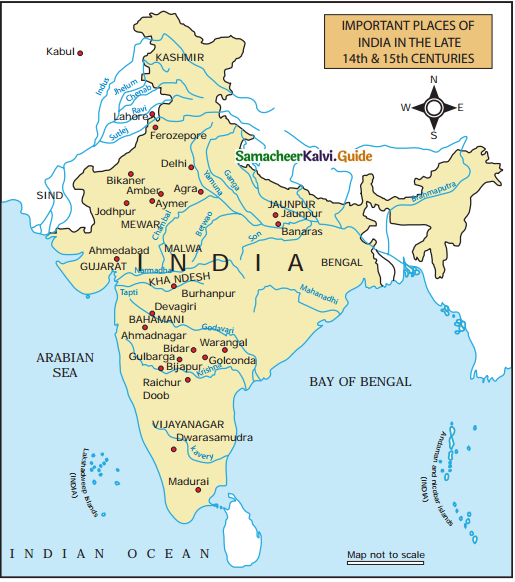 Question 2.
Arrange a debate in the class on the advantages and disadvantages of urbanization.
Answer:
Advantages:

II. Find out the correct statement

Question 1.
(i) Darasuram Temple was built by the Pandya rulers.
(ii) Under the Mughals, a large volume of literature was produced, especially in Persian and Urdu.
(iii) Tansen lived in the court of Krishnadeva Raya.
(iv) Telugu literature flourished under royal support.
Answer:
(ii) and (iv) are correct

Question 2.
(i) The state was indifferent to water resources.
(ii) Lift irrigation was unknown to Indians.
(iii) Cholas built a network of canals.
(iv) Muhammad bin Tughlaq built the biggest network of canals in the Delhi area.
Answer:
(iii) is correct

Question 3.
(i) Sugarcane was an important food crop.
(ii) The two new crops introduced by the Europeans in India were Wheat and Rice.
(iii) Rural population were known to abandon a settlement and move to a new location.
(iv) The peasants lived only at a very basic level of subsistence.
Answer:
(iii) and (iv) are correct

III. Fill in the blanks:

V. Answer all questions given under each heading

Question 1.
North India – The Advent of Islam
(a) Who established Muslim rule in Delhi?
Answer:
Muslim rule was established in Delhi at the end of the 12th century by Muhammad Ghori.

(b) Who was Mahmud Gawan?
Answer:
Mahmud Gawan was a great statesman and loyal minister of the Bahmani kingdom

(d) Who conquered them?
Answer:
The Deccan Sultanates were conquered by Aurangzeb in the 1660s and the entire region, as far south as Madras (Chennai) became a part of the Mughal empire.

(c) With whom did the Cholas have maritime trade?
Answer:
Maritime trade with south-east Asia and China expanded greatly during the Chola period.

(b) Where did they have their capital?
Answer:
They founded a new capital city on the southern banks of Tungabhadra which they named Vijayanagara (city of victory).

(b) Mention a few monuments left behind by the Mughals?
Answer:
The MughalsTeft behind numerous monuments, in addition to constructing entire cities like Shahjahanabad (Delhi) and Fatehpur Sikri, gardens, mosques, and forts.

(c) What was added by the Vijayanagar kingdom in temple construction?
Answer:
The intricately carved lofty towers or gopurams at the entrance to temples were all added during the Vijayanagar period.

Question 8.
Agriculture
(a) What was the source of water for agriculture?
Answer:
Both in the north and the south, agriculture depended heavily on irrigation. Canals and wells added to the water sources in addition to rainfall and rivers.

Question 9.
Crops in India
(a) What were the food grains produced in India?
Answer:
A variety of food grains like wheat, rice, and millets were produced apart from lentils and oilseeds.

(b) What were the major export of India?
Answer:
The major exports of India were textiles, pepper, precious and semi-precious gems – especially diamonds.

(c) What was imported from China?
Answer:
Silk, Chinese ceramics, gold, spices, aromatic woods and camphor were major imports from China to India.

Question 1.
When was the Mughal rule consolidated in India?
Answer:

Question 4.
Mention the several power centres which came up after the full of the Chola empire.
Answer:

Question 7.
How did Vijayanagar manage to get resources for its militaristic state?
Answer:

Question 8.
How did Akbar consolidate the Mughal empire?
Answer:

Question 9.
What led to a significant expansion of textile production in India?
Answer:

Question 11.
Who were Jesuit missionaries?
Answer:

Question 12.
How was the economic condition of the peasantry during the Medieval period of India?
Answer:

Question 13.
What was Karkhanas?
Answer:

Question 14.
Why did the European trading companies enter into contracts with the Indian merchant?
Answer:

Question 17.
Why was the Great Magna Carta signed by King John?
Answer: