Question 1.
What are the different types of companies?
Answer: 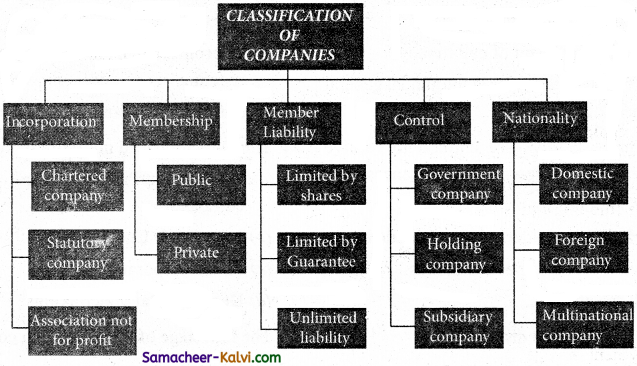 Question 2.
Define a Company.
Answer:
“A company is an association of many persons who contribute money or money’s worth to a common stock and employ it in some trade or business, and who share the profit and loss (as the case may be) arising there from.”
– James Stephenson

“A company is an artificial person created by law having a separate entity with a perpetual succession and a common seal”.
– Sec 2 of Companies Act 2013

Question 4.
Exlain any two characteristics of a company.
Answer:
(i) Capacity to Sue and being sued:
A company can sue or be sued in its own name as distinct from its members.

(ii) Separate Management:
A company is administered and managed by its managerial personnel i.e. the Board of Directors. The shareholders are simply the holders of the shares in the company and need not necessarily the managers of the company.

Question 5.
What is meant by Chartered Company?
Answer:
Chartered companies are established as a result of charter granted by the King or Queen of a country, eg: East Indian Company, Bank of England, Hudson’s Bay Company.

Question 6.
What are the advantages of Companies?
Answer:
(i) Large Capital:
A company can secure large capital compared to a sole trader or partnership. Large amount of capital is necessary for conducting business on a large scale, eg: Reliance has invested more than ^ 25,000 Crore in its telecom venture. Raising such huge amount of funds would be utter impossible in a sole-tradership or partnership.

(ii) Limited Liability:
The liability of a shareholder is limited. In the case of a company limited by guarantee, his liability is restricted to the amount that he has guaranteed to contribute in the event of winding up of the company.

(iii) Transferability of Shares:
Transaction of Shares between two individuals is easy. So there is liquidity of investment. Any shareholder can easily convert his shares into money by selling his shares.

Question 7.
What is meant by Private Company?
Answer:
Private limited company is a company which has minimum” paidup capital of rupees one lakh or such higher paid up capital as may be prescribed. The Articles may prescribe the following:

Question 8.
What is meant by perpetual succession?
Answer:
Perpetual Succession – continuity of life:
“Members may come and go but the company can go on forever” (Lord Gower). This is because company’s existence does not depend upon the existence of even promoters who were instrumental in its formation. Neither change in the membership of the company nor the death of its members has any impact on the continuity of its life.

Question 13.
What are the contents of Memorandum of Association?
Answer:
(i) Name Clause:
The name clause requires to state the legal and recognized name of the company. The company name is allow to be registered if it does not bear any similarities with the name of an existing company, companies only.

(v) Capital Clause:
The capital clause requires to state the company’s authorized share capital, the different categories of shares and the nominal value (the minimum value per share) oftheshares.lt is also required to list the company’s assets under this clause.

(vi) Association Clause:
The association clause confirms that shareholders bound by the MO A are willingly associating and forming a company. It is required seven members to sign an MOA for a public company and not less than two people for a MOA of a private company. The signing must be done in the presence of witness who must also append his signature.

Question 14.
What are the contents of Articles of Association?
Answer:

Question 15.
What is meant by Prospectus?
Answer:
According to Section 2(36) of the Companies Act, any document inviting the public to buy its shares or debentures comes under the definition of prospectus. It also applies to advertisements inviting deposits from the public. 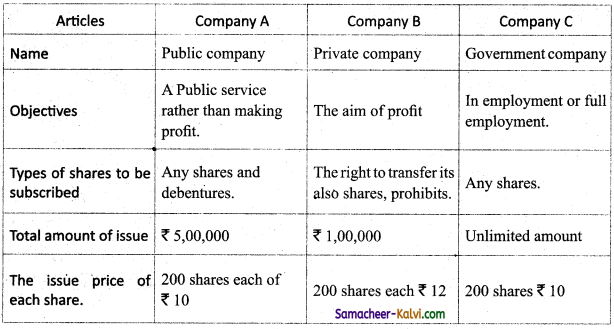 Question 22.
Ashok is an industrial designer by training. He had the opportunity to learn the technology of fibre glass manufacture while he was in Germany for his training. He plans to set up a plant for the manufacture of fibre glass in India and is able to interest some financiers and technologists. It is estimated that the initial investment in the plant will be of the order of ₹ 50 lakhs.

Ashok and others decide to set up a company for the purpose. Should they set up a public limited company for the purpose? If so, how should I they go about it? If not, what alternative would you suggest? What formalities will be required of Ashok and his associates if they choose the alternative form of organization suggested by you?
Answer:
Ashok started public limited company with a capital of ₹ 50 lakhs.
Incorporation:
(a) Registration,
(b) Approval for the proposed name.

Filling documents:
(a) Memorandum of Association,
(b) Articles of Association,
(c) List of directors,
(d) Written consent to act as a director,
(e) Statutory declaration,
(f) Registrar check all the documents,
(g) Prospectus,
(h) Minimum subscription,
(i) Statement in lies of prospectus,
(j) Filing further documents.
Ashok followed above rules regarding to form a company.

Question 23.
Collect any 10 items of daily use (Packed items} and list the names of the companies manufacturing those items. Classify those companies as public and private limited companies. Which of them are Multinational Companies?
Answer:

→ The traditional forms of business units, namely, sole proprietary concerns, and partnership firms, with their limited financial resources and managerial capability, cannot meet the challenges forced by the need for massive production and speedy distribution. Joint stock company form of organisation provides to key to this problem.

→ Joint stock company is distinct type of business organisation evolved to overcome the limitations of sole trader and partnership concern.