Question 9.
How milk is changed into curd, if a few drops of curd is added to it? What is the reason for its sourness?
Answer:
The change is brought by Lactobacillus lactis, a bacterium present in the curd. The sourness is due to the formation of lactic acid.

Question 10.
What are pyrenoids? Mention its role?
Answer:
Pyrenoids are proteinaceous bodies found in chromatophores of algae and assist in the synthesis and storage of starch.

Question 14.
Name the two forms of phycobilins and also give an example?
Answer:
Phycobilins exists in two form. They are:

Question 15.
Do you think shape of chloroplast is unique for algae? Justify your answer?
Answer:
Variation among the shape of the chloroplast is found in members of algae. It is Cup shaped (Chlartiydomonas), Discoid (Chara), Girdle shaped (Ulothrix), reticulate (Oedogonium), spiral (Spirogyra), stellate (Zygnema) and plate like (Mougeoutia). 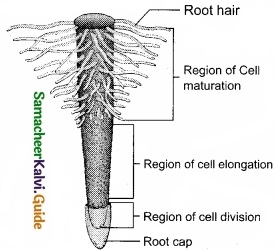 The process involving the recognition of phage to bacterium is called landing. Once the contact is established between tail fibres of phage and bacterial cell, tail fibres bend to anchor the pins and base plate to the cell surface. This step is called pinning.

After contraction of the base plate enlarges through which DNA is injected into the cell wall without using metabolic energy. The step involving injection of DNA particle alone into the bacterial cell is called Transfection. The empty protein coat leaving outside the cell is known as ‘ghost’. 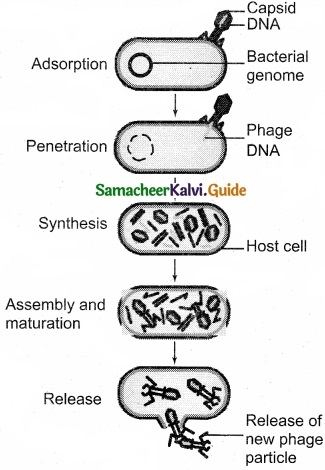 (III) Synthesis:
This step involves the degradation of bacterial chromosome, protein synthesis and DNA replication. The phage nucleic acid takes over the host biosynthetic machinery. Host DNA gets inactivated and breaks down.

Phage DNA suppresses the synthesis of bacterial protein and directs the metabolism of the cell to synthesis the proteins of the phage particles and simultaneously replication of phage DNA also takes place. 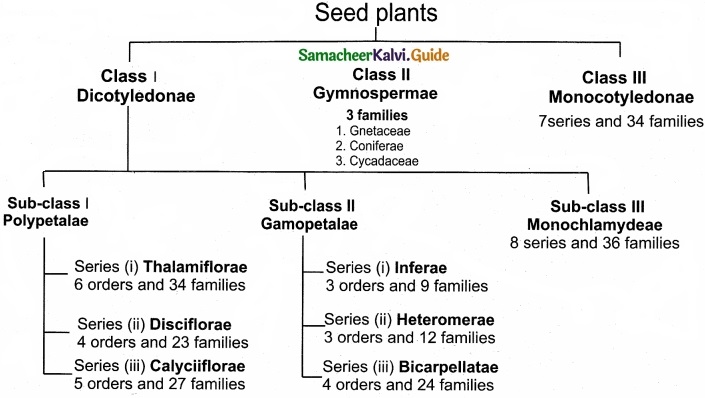 Question 21.
With the help of diagram explain the possible route of water across root cells?
Answer:
There are three possible routes of water.
They are:-

1. Apoplast:
The apoplast (Greek: apo = away; plast = cell) consists of everything external to the plasma membrane of the living cell. The apoplast includes cell walls, extra cellular spaces and the interior of dead cells such as vessel elements and tracheids.

In the apoplast pathway, water moves exclusively through the cell wall or the non-living part of the plant without crossing any membrane. The apoplast is a continuous system.

2. Symplast:
The symplast (Greek: sym = within; plast = cell) consists of the entire mass of cytosol of all the living cells in a plant, as well as the plasmodesmata, the cytoplasmic channel that interconnects them.

In the symplastic route, water has to cross plasma membrane to enter the cytoplasm of outer root cell; then it will move within adjoining cytoplasm through plasmodesmata around the vacuoles without the necessity to cross more membrane, till it reaches xylem.

3. Transmembrane route:
In transmembrane pathway water sequentially enters a cell on one side and exits from the cell on the other side. In this pathway, water crosses at least two membranes for each cell. Transport across the tonoplast is also involved.

Mechanism of Water Absorption Kramer (1949) recognized two distinct mechanisms which independently operate in the absorption of water in plants. They are,

a. Obligate or Total parasite – Completely depends on host for their survival and produces haustoria.

(I) Total stem parasite:
The leafless stem twine around the host and produce haustoria. Example: Cuscuta (Dodder), a rootless plant growing on Zizyphns, Citrus and so on.

(II) Total root parasite:
They do not have stem axis and grow in the roots of host plants produce haustoria. Example: Rajflesia, Orobanche and Balanophora.

b. Partial parasite – Plants of this group contain chlorophyll and synthesize carbohydrates. Water and mineral requirements are dependent on host plant.

(I) Partial Stem Parasite:
Example: Loranthus and Viscum (Mistletoe) Loranthus grows on fig and mango trees and absorb water and minerals from xylem.

Question 1.
Which is not a unit of taxonomic category?
(a) Series
(b) Glumaceae
(c) Class
(d) Phylum
Answer:
(b) Glumaceae 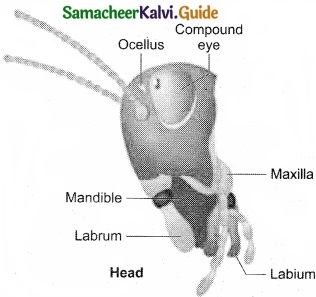 Question 14.
What is endomysium?
Answer:
The connective tissue surrounding the muscle fibre is called the endomysium.

Question 15.
What are the classical taxonomical tools?
Answer:
Taxonomical tools are the tools for the study of classification of organisms.
They include:-

Taxonomical keys:
Keys are based on comparative analysis of the similarities and dissimilarities of organisms. There are separate keys for different taxonomic categories.

Museum:
Biological Museums have collection of preserved plants and animals for study and ready reference. Specimens of both extinct and living organisms can be studied.

Zoological parks:
These are places where wild animals are kept in protected environments under human care. It enables us to study their food habits and behavior. 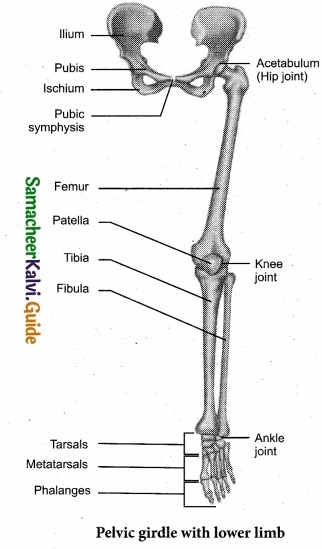 The dorsal wall of the intestine is folded into the cavity as the typhlosole. This fold contains blood vessels and increases the absorptive area of the intestine. The imier epithelium consists of columnar cells and glandular cells. The alimentary canal opens to the exterior through the anus. 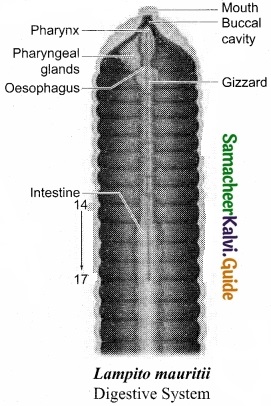 The ingested organic rich soil passes through the digestive tract where digestive enzymes breakdown complex food into smaller absorbable units. The simpler molecules are absorbed through the intestinal membrane and are utilized.

The undigested particles along with earth are passed out through the anus, as worm castings or vermicasts. The pharyngeal or salivary gland cells and the glandular cells of the intestine are supposed to be the digestive glands which secrete digestive enzymes for digestion of food.

What are the effects of smoking?
Answer:
Today due to curiosity, excitement or adventure youngsters start to smoke and later get addicted to smoking. Research says about 80% of the lung cancer is due to cigarette smoking. Smoking is inhaling the smoke from burning tobacco. There are thousands of known chemicals which includes nicotine, tar, carbon monoxide, ammonia, sulphur-dioxide and even small quantities of arsenic.

Carbon monoxide and nicotine damage the cardiovascular system and tar damages the gaseous exchange system. Nicotine is the chemical that causes addiction and is a stimulant which makes the heart beat faster and the narrowing of blood vessels results in raised blood pressure and coronary heart diseases.

Smoking can cause lunb diseases by damaging the airways and alveoli and results in emphysema and chronic bronchitis. These two diseases along with asthma are often referred as Chronic Obstructive Pulmonary Disease (COPD).

When a person smokes, nearly 85% of the smoke released is inhaled by the smoker himself and others in the vicinity, called passive smokers, are also affected. Guidance or counselling should be done in such users to withdraw this habit.

So the nerve roots of the remaining nerves are greatly elongated to exit the vertebral column at their appropriate space. The thick bundle of elongated nerve . roots within the lower vertebral canal is called the cauda equina (horse’s tail) because of its appearance.

In the white matter, the bundles of nerve fibres form two types of tracts namely ascending tracts which carry’ sensory impulses to the brain and descending tracts which carry motor impulses from the brain to the spinal nerves at various levels of the spinal cord. The spinal cord shows two enlargements,one in the cervical region and another one in the lumbosacral region. The cervical enlargement serves the upper limb and lumbar enlargement serves the lower limbs.

1. Selection of the best layer:
An active intelligent looking bird, with a bright comb, not obese should be selected.

3. Incubation and hatching:
The maintenance of newly laid eggs in optimum condition till hatching is called incubation. The fully developed chick emerges out of egg after an incubation period of 21 – 22 days.

4. Brooding:
Caring and management of young chicks for 4 – 6 weeks immediately after hatching is called brooding. It can also be categorized into two types namely natural and artificial brooding.

5. Housing of Poultry:
To protect the poultry from sun, rain and predators it is necessary to provide housing to poultry. Poultry house should be moisture proof, rat proof and it should be easily cleanable and durable.