Question 3.
Income method is measured by summing up of all forms of…………
(a) Revenue
(b) Taxes
(c) expenditure
(d) Income
Answer:
(d) Income

Question 4.
Match the following and choose the correct answer by using codes given below:

Question 5.
According to classical theory, rate of interest is a reward for………..
(a) Investment
(b) Demand
(c) Capital
(d) Saving
Answer:
(d) Saving

Question 10.
Match the following and choose the correct answer by using codes given below:

In these economies, resources are owned by individuals and the government. India, England, France and Brazil are the examples of mixed economy.

Question 22.
Explain briefly NNP at factor cost.
Answer:
Net National Product refers to the value of the net output of the economy during the year. NNP is obtained by deducting the value of depreciation, or replacement allowance of the capital assets from the GNP. It is expressed as,
NNP = GNP – depreciation allowance.

Question 26.
Define international trade.
Answer:
International Trade refers to the trade or exchange of goods and services between two or more countries. In other words, it is a trade among different countries or trade across political boundaries. It is also called as ‘external trade’ or ‘foreign trade’ or ‘inter-regional trade’.

Question 29.
Define Global warming.
Answer:
Global warming is the current increase in temperature of the Earth’s surface (both land and water) as well as its atmosphere. Average temperatures around the world have risen by 0.75°C (1.4°F) over the last 100 years. About two thirds of this increase has occurred since 1975. Carbon dioxide, methane, Chlorofluoro Carbon, nitrous oxides are the green house gases warming the earth’s surface. So it is also called green house effect. The CO2 is the most important of the green house gases contributing to 50% of global warming. Global warming adversely affects agriculture, horticulture and eco system.

Question 34.
Explain Demand-pull and Cost push inflation.
Answer:
Demand-Pull Vs Cost-Push inflation:
(i) Demand-Pull Inflation: Demand and supply play a crucial role in deciding the inflation levels in the society at all points of time. For instance, if the demand is high for a product and supply is low, the price of the products increases.

(ii) Cost-Push Inflation: When the cost of raw materials and other inputsrises inflation results. Increase in wages paid to labour also leads to inflation.

The NBFIs do not carry on pure banking business, but they will carry on other financial transactions. They receive deposits and give loans: They mobilize people’s savings and use the funds to finance expenditure on investment activities. In short, they are institutions which undertake borrowing and lending. They operate in both the money and the capital markets.

Question 36.
What are import quotas?
Answer:
Import Control: Imports may be controlled by:

Question 38.
Mention any three methods of redemption of public debt.
Answer:
Methods of Redemption of Public Debt:
The process of repaying a public debt is called redemption. The Government sells securities to the public and at the time of maturity, the person who holds the security surrenders it to the Government. The following methods are adopted for debt redemption.

Question 41 (a).
Explain the Importance of Factor Cost.
Answer: 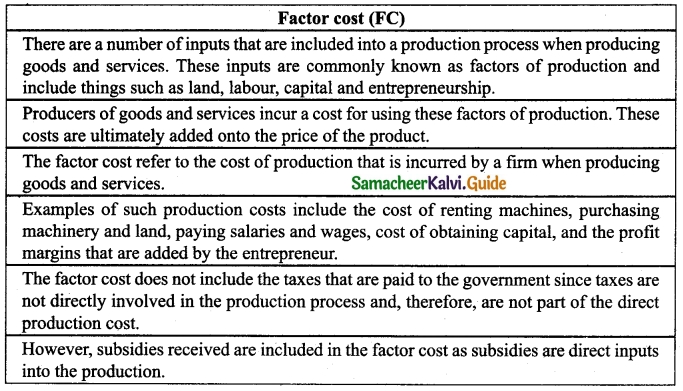 (b) Critically explain Say’s law of market.
Answer:
Criticisms of Say’s Law:
The following are the criticisms against Say’s law:

(b) Explain the Inflation Effects of production.
Answer:
Effects on Production: When the inflation is very moderate, it acts as an incentive to traders and producers. This is particularly prior to full employment when resources are not fully utilized. The profit due to rising prices encourages and induces business class to increase their investments in production, leading to generation of employment and income.

2. The issuer of currency: The objective is to maintain the currency and credit system of the country. It is the sole authority to issue currency. It also takes action to control the circulation of fake currency.

3. The issuer of Banking License: As per Sec 22 of Banking Regulation Act, every bank has to obtain a banking license from RBI to conduct banking business in India.

4. Banker to the Government: It acts as banker both to the central and the state governments. It provides short-term credit. It manages all new issues of government loans, servicing the government debt outstanding and nurturing the market for government securities. It advises the government on banking and financial subjects.

5. Banker’s Bank: RBI is the bank of all banks in India as it provides loan to banks, accept the deposit of banks, and rediscount the bills of banks.

6. Lender of last resort: The banks can borrow from the RBI by keeping eligible securities as collateral at the time of need or crisis, when there is no other source.

7. Act as clearing house: For settlement of banking transactions, RBI manages 14 clearing houses. It facilitates the exchange of instruments and processing of payment instructions.

8. Custodian of foreign exchange reserves: It acts as a custodian of FOREX. It administers and enforces the provision of Foreign Exchange Management Act (FEMA), 1999. RBI buys and sells foreign currency to maintain the exchange rate of Indian rupee v/s foreign currencies.

9. Regulator of Economy: It controls the money supply in the system, monitors different key indicators like GDP, Inflation, etc.

12. Developmental Role: This role includes the development of the quality banking system in India and ensuring that credit is available to the productive sectors of the economy. It provides a wide range of promotional functions to support national objectives. It also includes establishing institutions designed to build the country’s financial infrastructure. It also helps in expanding access to affordable financial services and promoting financial education and literacy.

13. Publisher of monetary data and other data: RBI maintains and provides all essential banking and other economic data, formulating and critically evaluating the economic policies in India. RBI collects, collates and publishes data regularly.

14. Exchange manager and controller: RBI represents India as a member of the International Monetary Fund [IMF], Most of the commercial banks are authorized dealers of RBI.

Illustration:
Ricardo’s theory of comparative cost can be explained with a hypothetical example of production costs of cloth and wheat in America and India.

It is evident from the example that India has an absolute advantage in production of both cloth and wheat. 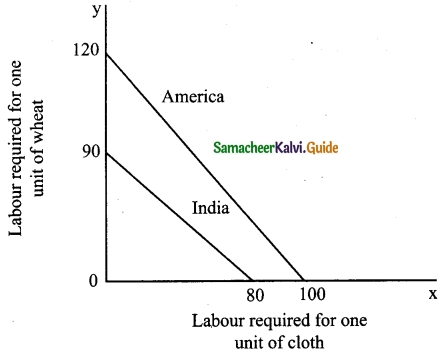 (b) Bring out the merits of indirect taxes over direct taxes.
Answer:
Merits of Direct Taxes:
(i) Equity:

(ii) Equitable:
The indirect tax satisfies the canon of equity when higher tax is imposed on luxuries used by rich people.

Demerits of Direct Taxes:
(i) Unpopular: 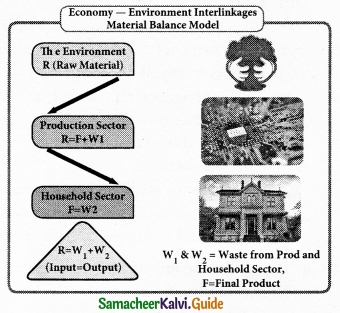 Question 47 (a).
Describe the case for planning.
Answer:
The economic planning is justified on the following grounds.
(i) To accelerate and strengthen market mechanism: The market mechanism works imperfectly in underdeveloped countries because of the ignorance and unfamiliarity with it. A large part of the economy comprises the non-monetized sector.

(ii) To remove unemployment: Capital being scarce and labour being abundant, the problem of providing gainful employment opportunities to an ever-increasing labour force is a difficult task.

(iv) To remove poverty and inequalities: Planning is the only path open to underdeveloped countries, for raising national and per capita income, reducing inequalities and poverty and increasing employment opportunities.