Students get through the TN Board 11th Bio Botany Important Questions Chapter 12 Mineral Nutrition which is useful for their exam preparation.

Question 2.
State the “Law of minimum” proposed by Liebig.
Answer:
The “law of minimum” states that the productivity of soil depends on the number of essential elements present in minimum quantity.

Question 5.
In which form do the following minerals are absorbed by plants.
(a) Nitrogen
(b) Magnesium
(c) Boron
(d) Phosphorous
Answer:

Question 6.
Name any two calcium deficiency disease in plants.
Answer:
(a) Blackheart of celery,
(b) Hooked leaf tip in beet, Musa and tomato.

Question 7.
Nitrogen is a Macronutrient – Justify.
Answer:
Nitrogen (N) is required by the plants in the greatest amount. It is an essential component of proteins, nucleic acids, amino acids, vitamins, hormones, alkaloids, chlorophyll and cytochrome.

Question 8.
What are Siderophores?
Answer: Siderophores (iron carriers) are Iron chelating agents produced by bacteria. They are used to chelate ferric iron (Fe3+) from the environment and host.

Question 9.
Given below are the plant diseases, name the deficient mineral responsible for the disease.
(a) Khaira disease
(b) Internal cork of apple
(c) Die back of Citrus
(d) Sand drown of tobacco
Answer:

Question 10.
Define Calmodulin.
Answer:
Calmodulin is a Ca2+ modulating protein in eukaryotic cells. It is a heat-stable protein involved in fine metabolic regulations.

Question 11.
When does an essential mineral is considered “toxic”?
Answer:
An increase of mineral nutrients more than the normal concentration causes toxicity. A concentration, at which 10 % of the dry weight of tissue is reduced, is considered toxic.

Question 16.
What are obligate parasites? Give example.
Answer:
Obligate (Total) parasites completely depend on the host for survival. Example: Cuscuta.

Question 17.
What is a Lichen?
Answer:
Lichens is a mutual association of Algae and Fungi. Algae prepare food and fungi absorbs water and provides thallus structure.

Question 2.
Mention the role of Sulphur in plants.
Answer:
Sulphur (S): Essential component of amino acids like cystine, cysteine and methionine, a constituent of coenzyme A, Vitamins like biotin and thiamine, a constituent of proteins and ferredoxin. Plants utilise sulphur as sulphate (SO4–) ions.
Deficiency symptoms: Chlorosis, anthocyanin formation, stunted growth, rolling of leaf tip and reduced nodulation in legumes.

Question 3.
Give a short note on EDTA.
Answer:
EDTA – Ethylene Diamine Tetra Acetic acid is a chelating agent.
Plants growing in alkaline soil though supplied with all nutrients including iron show iron deficiency. To rectify this, iron is made into a soluble complex by adding EDTA (Fe-EDTA Complex) which can be easily absorbed by plants.

Question 4.
Write a brief note on Manganese toxicity.
Answer:
Increased Concentration of Manganese will prevent the uptake of Fe and Mg, prevent translocation of Ca to the shoot apex and cause their deficiency. The symptoms of manganese toxicity are the appearance of brown spots surrounded by chlorotic veins.

Question 5.
Write a note on Hydroponics and Aeroponics.
Answer:
Hydroponics or Soilless culture: Von Sachs developed a method of growing plants in the nutrient solution. The commonly used nutrient solutions are Knop solution (1865) and Arnon and Hoagland Solution (1940). Later the term Hydroponics was coined by Goerick (1940) and he also introduced commercial techniques for hydroponics. In hydroponics roots are immersed in the solution containing nutrients and air is supplied with help of a tube.
Aeroponics: This technique was developed by Soifer Hillel and David Durger. It is a system where roots are suspended in air and nutrients are sprayed over the roots by a motor-driven rotor.

Question 8.
Transamination – Write a note.
Answer:
Transfer of amino group (NH3+) from glutamic acid glutamate to keto group of a keto acid. Glutamic acid is the main amino acid from which other amino acids are synthesised by transamination. Transamination requires the enzyme transaminase and coenzyme pyridoxal phosphate (derivative of vitamin B6 – pyridoxine). 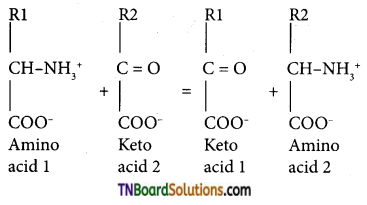 Question 9.
Give an account on GOGAT – pathway.
Answer:
Glutamate amino acid combines with ammonia to form the amide glutamine. 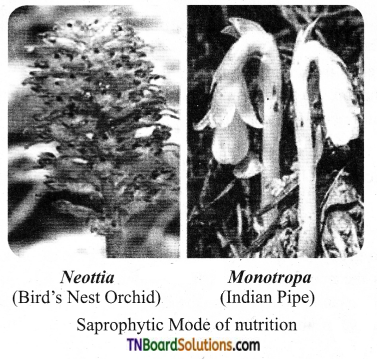 Question 1.
Write in detail about functions, mode of absorption and deficiency symptoms of any five macronutrients.
Answer:

Question 2.
Give in detail about the vitality of Boron and Zinc in plant nourishment.
Answer:
Zinc (Zn): Essential for the synthesis of Indole acetic acid (Auxin) activator of carboxylases, alcohol dehydrogenase, lactic dehydrogenase, glutamic acid dehydrogenase, carboxypeptidases and tryptophan synthetase. It is absorbed as Zn2+ ions.
Deficiency: Little leaf and mottle leaf due to deficiency of auxin, Inter veinal chlorosis, stunted growth, necrosis and Khaira disease of rice.
Boron (B): Translocation of carbohydrates, uptake and utilisation of Ca++, pollen germination, nitrogen metabolism, fat metabolism, cell elongation and differentiation. It is absorbed as borate BO3- ions.
Deficiency: Death of root and shoot tips, premature fall of flowers and fruits, the brown heart of beet root, the internal cork of apple and fruit cracks.

Question 3.
Explain in detail the symbiotic nitrogen fixation with nodulation.
Answer:
i. Nitrogen fixation with nodulation:
Rhizobium bacterium is found in leguminous plants and fixes atmospheric nitrogen. This kind of symbiotic association is beneficial for both the bacterium and the plant. Root nodules are formed due to bacterial infection. Rhizobium enters into the host cell and proliferates, it remains separated from the host cytoplasm by a membrane.
Stages of Root nodule formation:

Question 4.
Describe the various stages of the nitrogen cycle.
Answer:
The nitrogen cycle consists of the following stages:
1. Fixation of atmospheric nitrogen: Di-nitrogen molecule from the atmosphere progressively gets reduced by the addition of a pair of hydrogen atoms. A triple bond between two nitrogen atoms (N = N) is cleaved to produce ammonia. The nitrogen fixation process requires a Nitrogenase enzyme complex, Minerals (Mo, Fe and S), anaerobic condition, ATP, electron and glucose 6 phosphates as H+ donor. The nitrogenase enzyme is active only in anaerobic condition. To create this anaerobic condition a pigment known as leghaemoglobin is synthesized in the nodules which act as an oxygen scavenger and removes the oxygen. Nitrogen-fixing bacteria in root nodules appear pinkish due to the presence of this leghaemoglobin pigment. 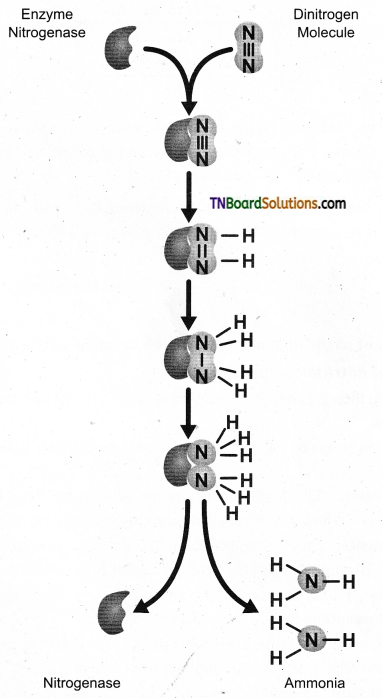 3. Nitrate Assimilation: The process by which nitrate is reduced to ammonia is called nitrate assimilation and occurs during the nitrogen cycle.

4. Ammonification: The decomposition of organic nitrogen (proteins and amino acids) from dead plants and animals into ammonia is called ammonification. Organism involved in this process are Bacillus ramosus and Bacillus Vulgaris.
5. Denitrification: Nitrates in the soil are converted back into atmospheric nitrogen by a process called denitrification. Bacteria involved in this process are Pseudomonas, Thiobacillus and Bacillus subtilis.

Question 5.
Explain the types of parasitic mode of nutrition in angiosperms.
Answer:
Parasitic mode of nutrition in angiosperms:
Organisms deriving their nutrient from another organism (host) and causing the disease to the host are called parasites.
a. Obligate or Total parasite – Completely depends on the host for their survival and produces haustoria.

b. Partial parasite – Plants of this group contain chlorophyll and synthesize carbohydrates. Water and mineral requirements are dependent on a host plant.

Question 1.
In metro cities like Chennai, there is a lack of space for a garden. Suggest a technique by which plants can be grown without the need for soil and land space.
Answer:
The technique which can be used is hydroponics in which nutrient solution is used for growing plants.

Question 3.
Excess of manganese in the soil leads to deficiency of Mg, Fe and Ca. Justify.
Answer:
Increased concentration of Manganese will prevent the uptake of Fe and Mg and prevent translocation of Ca to the shoot apex and cause their deficiency. This condition is referred to as manganese toxicity.

Question 4.
Name the crucial enzyme found in the root nodules of leguminous plants for nitrogen fixation. Also, name the pigment which is highly essential for the activation of the enzyme.
Answer:
Root nodules of legume plants contained nitrogenase enzyme for nitrogen fixation.
Leghaemoglobin is the pink coloured pigment that creates an anaerobic condition for the activation of the nitrogenase complex.

Question 5.
Plants require nutrients. If we supply these in excess will they be beneficial to plants? If yes, how? If no, why?
Answer:
No, an excess supply of nutrients is not advised for the healthier growth of plants. Due to the fact that increased concentration of nutrients may lead to the toxicity of particular minerals which prevents the uptake of other minerals and also affect various other metabolic activities of the cells, leading to the poor growth of the plant.

Question 6.
X is a primitive, eukaryotic chlorophyllous organism and Y is a eukaryotic, achlorophyllous organism. Both X and Y live mutually together benefitting each other.
(a) Name this mutual association.
(b) What X and Y are?
(c) Explain their relationship?
Answer:
(a) Lichens.
(b) X = Algae, Y = fungi
(c) In lichens, Algae prepare food and fungi absorbs water and provides thallus structure.

2. Which mineral is essential for cell wall formation in Equisetuml?
(a) Boron
(b) Silicon
(c) Cellulose
(d) Carbon
Answer:
(b) Silicon

4. Identify the wrong statement(s).
(i) Molybdenum is a micronutrient.
(ii) Carbon, Hydrogen, Nitrogen are skeletal elements.
(iii) Manganese is the activator for RUBP carboxylase.
(iv) Potassium maintains osmotic potential of the cell.
(a) (i) and (iv)
(b) (ii) and (iii)
(c) Only (ii)
(d) Only (iv)
Answer:
(b) (ii) and (iii)

17. Which bacterium is NOT involved in Denitrification?
(a) Pseudomonas
(b) Thiobacillus
(c) Bacillus subtilis
(d) Nitrobacter
Answer:
(d) Nitrobacter

24. ………… is a pioneer species in xeric succession.
(a) Lichens
(b) Mycorrhizae
(c) Cyanobacteria
(d) Pteridophyte
Answer:
(a) Lichens